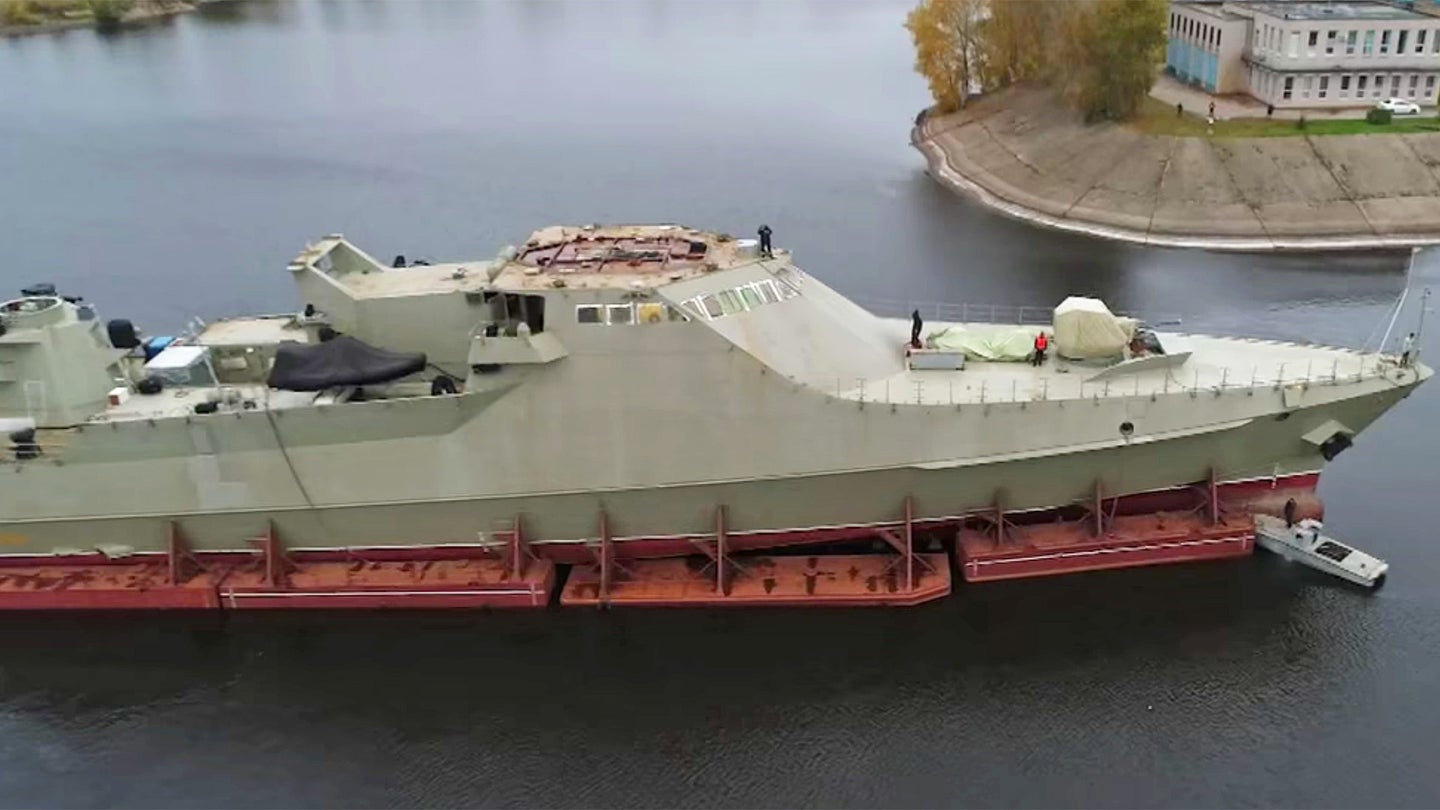 Russia is constructing half a dozen Project 22160 patrol boats that leverage an innovative and compact design that provides a lot of capability and potentially a huge amount of combat punch in a relatively small seaframe. The concept is innovative enough that it should be studied by western navies as a source of inspiration for their own future multi-role combat vessels.

Displacing just 1,300 tons, and at 308 feet long, these vessels sport stealthy features and have a range of 6,000 miles. They can stay at sea for 60 days while housing a crew complement of approximately 80 people. They aren't slowpokes either and can hit speeds of up to 30 knots.

The class was designed with a slew of missions in mind, including everything from anti-piracy to counter-terrorism, and even strike and special operations support. But above all else they are sea control vessels capable of blue water operations just as much as brown water operations.

They pack a 57mm А-220М automatic deck gun, a pair of DP-65 grenade launchers, as well as two 14.5mm guns. A Gibka air defense missile turret that can hold up to 12 Igla surface-to-air point defense missiles is also destined to equip these ships.

The system's infrared and telescopic TV sensors can also be used for surveillance. TK25 and PK10 countermeasure systems help protect the vessel from threats above and below the sea, as well.

The small ship also features a sizable flight-deck and a somewhat unique semi-recessed hangar bay that can accommodate a medium multi-purpose helicopter like the KA-27/28/29. This gives the ship a over-the-horizon surveillance, strike, and search and rescue capability.

In addition to navigational sensors, the patrol ship's primary sensor system is the Pozitiv-ME1 3D active surface and air search radar, which has a range against fighter sized targets of about 75 to 100 miles. The latest compact active and passive sonar systems are also carried along with a pair of rigid hull inflatable boats that flank each side of the ship's forecastle. These can be used for delivering boarding parties, as tenders, and for other duties.

But the most interesting part of the concept is an expansive garage-like area below the helicopter deck where two containers can be fitted under overhead swinging doors. This space is flexible and could be used for everything from extra living space for crew or special operations personnel, to launching and recovering small boats and underwater or surface unmanned craft, and/or even for fitting a containerized drone control center. But the space's primary purpose is to house containerized long-range weapons.

A similar concept is being built into Russia's icebreaking patrol ships intended for arctic operations, but in the case of the Project 22160 ships, containerized Klub-N anti-ship and land attack cruise missiles will be the class's primary armament. Other containerized missiles can be switched in and out over time as well.

Basically, this gives these relatively small combat vessels the option to take along a credible long-range anti-ship and land attack capability, with the ability to field eight missiles at once in two canisters. Alternatively one canister can be housed with the extra space used for other operations.

A pretty capable little ship right? But Russia is buying the base model.

The enhanced version of the Project 22160 class also features a Shtil-1 vertical launch missile system between the bridge and the deck gun packing between a dozen and two dozen 9M317ME missiles.

Based on advanced derivatives of the SA-11 Buk system, this gives these little ships an area air defense capability, allowing them to protect convoys of vessels and localized areas from air-breathing threats. The missiles have a range of roughly 30 miles and are very loosely analogous to block I version of NATO's RIM-162 Evolved Sea Sparrow Missile.

This additional capability would be packed into a vessel displacing roughly 1,700 tons. In comparison, the Freedom class of Littoral Combat Ships, although faster, don't pack anywhere near this must punch and they have over double the displacement. They likely cost far more per hull too—basically half a billion dollars each.

There is no denying that Russia has a knack for stuffing a lot of combat capability into small vessels, especially as of late. The country's Buyan class corvettes are especially vicious little ships, having showed off their ability to launch long-range cruise missiles at Syria from the Caspian Sea for the first time in 2015. But the modularity and air defense capabilities of the Project 22160 boats is particularly attractive, as is their ability to operate in open ocean for long periods of time.

What you end up with is almost a pocket frigate of sorts, one that can be fiscally obtainable to cash strapped navies both in terms of acquisition and sustainment costs. Russia is well aware of this as they look at any chance they can to sell their combat vessels to weapons customers abroad. Vietnam and Algeria especially come to mind.

It will be interesting to see where this fairly exciting combat ship program goes in the coming years. The first ship in the class, the Vasily Bykov, is undergoing sea trials now and is expected to be delivered to the Russian Navy later this year. All six ships are currently under construction at the Zelenodolsk and Zalid shipyards and are intended to join Russia's ever more potent Black Sea Fleet by the early 2020s.