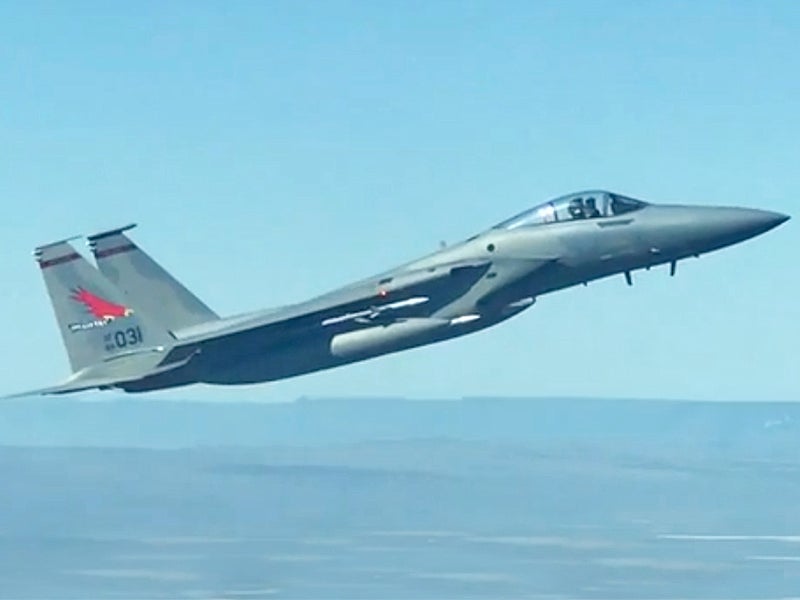 The 142nd Fighter Wing is one of the world's premier air F-15 Eagle units. Based in Portland, Oregon, their mission includes sitting alert all day, every day, waiting to scramble at a moment's notice to intercept everything from airliners having emergencies, to enemy cruise missiles attacking from the sea, to even more 'exotic' aerial targets. So they have to be trained in the unique procedures and techniques used to find and engage with a wide variety of aircraft with vastly different performance capabilities.

The F-15C typically weight over 50,000lbs at takeoff and packs a pair of Pratt and Whitney F100 turbofans that crank out 47,500lb of thrust in afterburner. Compare this to a Cessna 172 that weighs a couple thousand pounds loaded and runs on a 160hp piston engine and you get the picture of how vast the disparity in performance can be between the Eagle and its target. This makes flying tricky for Eagle drivers attempting to execute safe and effective intercepts.

With this in mind, the Air National Guard constantly trains to execute intercepts on various targets, and because wayward light aircraft pilots straying where they shouldn't is a constant source of scrambles, this training includes intercepting Cessnas from the Civil Air Patrol.

One of these intercepts can be seen in dramatic fashion in the video below.

The video comes to us from Civil Air Patrol pilot Michael Clarey who had the pleasure of helping provide prey for the Eagles last June. We asked Michael about his experience, here's what he said:

"On June 25th, 2017 I was asked if I would like to participate in a Felix Keynote mission on June 29th. The mission was for a flight crew to fly a Cessna into “restricted airspace” and have the Portland Air National Guard F-15s scramble to come intercept us. Obviously I said yes to the mission!

We get down near Bend, Oregon, out in the middle of nowhere and we were told by 9AM the F-15s would be on us. 9:05 comes up and off our four and eight o’clock we see two F-15’s slowly approaching us.

We were instructed to ignore any communication between us. After their third attempt of contacting us you can see they get really close of our left wing. Still, we can’t acknowledge them. After a few passes they disappear. Minutes go by as we’re trying to find them, then BAM they perform a hammer head right in front of our Cessna to intimidate/grab our attention to turn around.

All in all, it was an awesome experience that I would do again in a heart beat."

In the video we can see the 142nd Fighter Wing's fully armed color bird do a slow high-alpha flyby of Michael's Cessna, before punching the afterburners to maneuver around again. Michael noted to The War Zone that is was really odd hearing the Eagle's thunderous engine noise inside the Cessna's cockpit.

Air Guard Eagles protect the maritime perimeter around the United States as well as large swathes of land in regions which they are bases. Five Air Guard Eagle squadrons based in Massachusetts, Florida, New Orleans, California and Oregon are America's primary cadre of aerial sentinels. Their aircraft are now equipped with the world's most power AESA fighter radar, the APG-63V3, as well as Sniper targeting pods that are used for long-range indentificaiton of aircraft at day or at night.

The pod's telescopic, stabilized optics can be slaved to the F-15's radar, allowing it to easily get an ID on an aircraft from well beyond visual range. Other upgrades are also in the works, which you can read all about here and here.

Recently the 142nd Fighter Wing, which guards airspace ranging from British Columbia all the way down to Northern California, had a snap readiness drill where they sortied 13 of their 21 aircraft at once in less than 24 hours. It was an impressive display, especially considering their jets are over 30 years old.

Still, they are some of the newest F-15C/Ds made. Considering how much the USAF has shrunk in terms of number of fighter squadrons since 2003, and especially since 1991, Air Guard Eagles have to be ready to deploy on short notice during a crisis abroad.

So no, the Air National Guard is not a bunch of weekend warriors who fly obsolete gear and would only be deployed if the world was coming to an end. Quite the opposite. Today they are a key element of the Pentagon's front line air combat force.

A special thanks to our friend and aviation photographer Paul Schweizerhof for pointing us towards Michael's video.