New rockets with multiple firing modes and the ability to fire them safely from within buildings could keep the weapon in service for years to come. 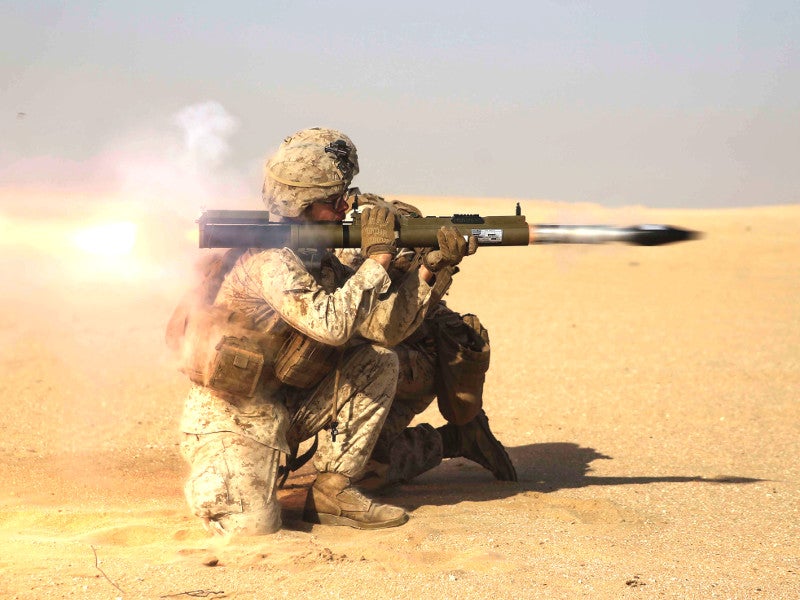 The U.S. Marine Corps is hard at work reexamining what mix of shoulder-fired rockets and recoilless rifles gives its infantry units best means of destroying variety of different targets. Those same elements may soon begin receiving new versions of the Vietnam-era M72 rocket launcher to further increase their firepower and allow them to use the weapons safely from inside buildings.

Marines from 3rd Battalion, 4th Marine Regiment got a chance to test out the new versions of the M72 at the Urban Advanced Naval Technology Exercises 2018, or ANTX18, at Camp Pendleton in California earlier in March 2018, according to Defense News. The event was an opportunity to showcase a host of new technologies, including unmanned ground vehicles to support infantry units, small drones to help scout ahead and spot potential threats, hand-held jamming devices to protect against small enemy unmanned aerial vehicles, new lightweight battle buggies, improved networked communications devices, and more.

So it’s notable that updated variants of the M72, a weapon that first entered service in 1963, were also on display during the drills. “It’s a game changer,” Lance Corpoal Sam Elichalt, a squad leader within 3/4th Marine’s Kilo Company, told Defense News in regards to the newest types.

At its core, the weapon is a lightweight, shoulder-fired 66mm rocket that comes pre-packaged inside its own launcher. Depending on the type of rocket inside, the complete system weighs between eight and 12 pounds, three pounds lighter at its heaviest than a shoulder-fired M3E1 Carl Gustav recoilless rifle is unloaded. The launcher itself does have attachment points for aiming lasers or other sighting systems, but it’s supposed to be disposable and it has built-in rudimentary leaf sights.

Firing it is simple enough that the manufacturer, at present Norway’s Nammo and its American subsidiary Talley Nammo, prints the operating instructions on the side of the tube. An individual pulls out a grenade-style safety pin, fully extends the launch tube, which raises the sights and makes the weapon ready to fire.

Beyond its light weight, which allows troops to easily carry multiple launchers at once, and simplicity, one of the system’s growing strengths is the number of different rockets available. When the U.S. Army and Marine Corps first adopted the weapon, they both intended to employ it primarily as a lightweight anti-tank weapon.

Testing increasingly showed the small 66mm rocket had limited effectiveness against tanks, though it could blast through lighter armored vehicles. In Vietnam, where encounters with enemy armor were limited in general, soldiers and Marines used the weapons to blow apart bunkers and otherwise provide additional fire support. In the latter stages of the conflict, the weapon did also prove its worth against lighter tanks, notably during the Battle of Lang Vei in 1969.

During the Battle of An Loc in 1972, South Vietnamese troops exploited the city's confines to attack heavier North Vietnamese armor with M72s from the side and rear flanks where they were more vulnerable.

In the late 1980s, the Army began replacing the bulk of its M72s with a new, Swedish-designed 84mm disposable recoilless rifle, known as the AT-4 or M136. But the portability and flexibility of the smaller weapon has kept it in service ever since, especially with special operations forces that appreciated its ability to take on other roles.

Nammo now produces more than a half dozen different variants, many of which are already in U.S. military service. These still include anti-armor types good for destroying light vehicles and unarmored trucks. Some of those models include a more sensitive “graze” fuze that detonates the rocket even if it only glances off a target, increasing the likelihood that it will do at least some damage.

There is also a version with a larger, penetrating warhead that can break through brick walls and reinforced doors before exploding within. This “anti-structure” type increases the weapon’s ability to blow up fortifications and other hard cover. Another variant has similar abilities to bust through barriers, but combines it with a large fragmentation warhead that creates a cloud of shrapnel that is particularly deadly in a confined space.

Nammo also continues to improve the handling of the launcher and is now offering programmable rounds where the operating can select certain options before firing. One of these newer dual-fuze options gives the shooter the ability to have the rocket explode when it hits a target or delay its detonation to try and bust through a barrier.

But perhaps most importantly, the Norwegian defense contractor has devised a system that eliminates the backblast of firing the rocket, which makes it safer to use near other friendly forces and from within a building. It’s still dangerous to stand directly behind someone shooting an M72 up to 230 feet away.

With M72s using the new “fire from enclosure” propelling system, Marines would not have to necessarily expose themselves from cover to fire the weapon. The system works by inserting a liquid ballast at the rear of the tube, which absorbs the blast and overpressure as the rocket speeds away, and replacing the rocket with a propellant charge similar to those on mortar shells. The arrangement has the added benefit of reducing the weapon’s acoustic signature, reportedly similar to a pistol shot, which could help conceal the firer and just protect their hearing.

This does come at the cost of an extra pound of weight, but the complete weapon will still be lighter than larger shoulder-fired systems. However, no matter how many firing mode options Nammo can give the M72, it will still be a single-shot, disposable system.

This inherently limits its use and is one of the reasons why both the Marine Corps and the Army are increasingly looking at fielding the reloadable Carl Gustav recoilless rifle. Though heavier and bulkier, that system gives troops the ability to fire multiple rounds from the same weapon and load up only the one they need for a particular target, instead of having to find the appropriate M72 in a pile of outwardly identical looking launchers.

The M72 will have the benefit of being safe to use from inside buildings, but the Marines already have special “confined space” versions of the AT-4, known as the M136A1 in service, too, but the backblast from those still requires significant room for safe firing. Those Swedish weapons are also available pre-loaded with anti-structure, bunker-busting, and other types of warheads.

That’s not to say the smaller M72 might not fill a useful role and offer an even more lightweight anti-armor and anti-structure weapon. The system’s inherent benefits prompted the Marine Corps to extend the life of its existing weapons a decade ago.

Still, the Marines will have to weigh the costs, both in terms of buying the weapons and adding them to the logistics chain. They are already presented with a similar decision about whether it makes sense to keep their Shoulder-Launched Multipurpose Assault Weapons, which just received a major overhaul, and begin fielding the Carl Gustav.

Depending on how the Corps ultimately decides to proceed, its quite possible that Marines could still be using some version of the M72, if even in a limited capacity, for the foreseeable future.