Saudi Arabia may be briefly wearing the world's most advanced Eagle crown with their new F-15SAs, but Qatar will assume that honor when the first of its 36—or possibly 72 if they execute an option for more—F-15QAs are delivered in the next couple of years. Along with a totally remodeled cockpit featuring large panel touch screen displays, Qatar's F-15s will also do away with the Strike Eagle's iconic green-glowing, wide-angle heads up display (HUD), replacing it with an innovative new design from BAE Systems.

When the Strike Eagle arrived on the scene in the late 1980s, its massive HUD was a technological marvel. It covered a lot more visual real estate than the F-15A/B/C/D's unit, which itself was cutting-edge when it was integrated onto the jet in the early 1970s.

The F-15E's Kaiser IR-2394/A wide angle HUD was even more special because it could project the forward-looking infrared video from the Strike Eagle's LANTIRN navigation pod up in front of the pilot over a large area. This ability is referred to as 'raster' and the ability to project symbology being dubbed 'line.' The Strike Eagle's HUD could project complex line and raster imagery simultaneously.

Combined with the pod's terrain following radar, the Strike Eagle's pilot had a whole new level of situational awareness when flying in the dark of night just a couple hundred feet above the ground at high speed. Eventually the Block 40 F-16C/D would also feature a HUD optimized for the same LANTIRN system. That unit was known as the wide-angle raster or WAR HUD.

The introduction of night vision goggles and a reduced emphasis on nap-of-the-earth combat flying lessened the demand for these tailored HUD systems, and more modern HUDs became line and raster capable as well, they also allow for a wide field of view without being so cumbersome.

Additionally, the 1980s era tech raster HUDs feature fairly massive components, are comparatively maintenance intensive, and they weigh a lot. Because of these issues, it's harder to modify and upgrade a fighter's cockpit around them.

The belated introduction of helmet mounted displays on American fighters has also decreased the reliance solely on the HUD for 'eyes out of the cockpit' flying and as a source of primary targeting information. The F-35's helmet is the most capable, but many other options exist that provide great capabilities without the extensive integration demands, and now these can include the ability to use the system with night vision goggles as well as a daytime visor.

For instance, the Joint Helmet Mounted Cueing System (JHMCS) that is used on the majority of American fighter aircraft now features a "digital eye piece" that allows for day and night functionality. And these helmet mounted displays can be integrated in such a way that they do not interfere with the functionality of a HUD by blinking off whenever the pilot's gaze is pointed directly at the Heads Up Display.

So with all this in mind, and considering the Eagle is finally getting a new cockpit, it's not surprising that Boeing thinks the F-15 is due for a less ungainly HUD system that can still do everything the old system can and more. Think of it as moving from an old analogue tube TV to a digital flatscreen TV. And this is precisely where BAE's modular LiteHUD system comes in to the picture—literally.

For the Eagle, Boeing told The War Zone that this system is called the Low Profile HUD, but really it's just a derivative of LiteHUD which offers fairly extreme enhancements over legacy HUD designs. It weighs 50 percent less and takes up 60 percent less space than most existing types. It can project high resolution imagery (1280H x 1024W), has a wide 25X20 degree field of view (the existing model offers a 21X28 degree field of view), and is completely digital. This all means that it will save money over the life of the jet and will help when it comes to mission readiness. It's also not obtrusive in the cockpit.

In just the couple of years LiteHUD has been in existence, the system has gone through a series of refinements and it has already been incorporated on advanced Hawk trainers, AC-130 gunships, and Textron's Scorpion, among other aircraft.

So going forward, LiteHUD will now be included on future Strike Eagle derivatives. This marks the product's first known fighter platform customer, and it's a heavy-weight, high-tech beast with a reputation for dogfighting prowess at that.

Saudi Arabia's newest Eagles have an advanced cockpit with upgraded displays and up-front control panel, but it can't match to the capability that widescreen cockpit displays can provide:

The system's modular and compact nature makes it ideal for everything from training aircraft to high-end experimental aircraft as well, so don't be surprised if you see these things popping up more and more, especially now that it has the coveted Eagle's endorsement.

There's even a good chance that it will replace the F-15C/D Eagle's legacy HUD if and when the USAF provides funds to upgrade those jets' cockpits to a similar configuration. Supposedly this initiative is already part of a series of measures that aim to keep the F-15C/D relevant for roughly another 20 years. A structural upgrade, completion of AESA radar conversion program, an infrared search and track system, new mission computers, a podded communications gateway, conformal fuel tanks and other smaller upgrades are also part of this overall plan.

It has been reported that the Eagle Passive/Active Warning Survivability System (EPAWSS), a new digital electronic warfare and radar warning receiver suite that will give the F-15C/D a huge survivability boost, has been cancelled. This is not accurate. The USAF is focusing on installing it on the F-15E fleet and is prioritizing an F-15C/D a structural upgrade at this time. It will likely be added later if the USAF plans on sticking to its air superiority Eagle roadmap and keeping the jet for the foreseeable future.

As for the F-15QA, it will have all the features the F-15SA has, including the activation of wing weapons stations one and nine, fly-by-wire flight control system, digital electronic warfare suite and other enhancements, but it will add a new internal wing structure and the new cockpit design.

The cockpit upgrade is a critical feature because it can allow the F-15's crew to visualize the battle-space and what the jets sensors and those connected to it via data-link are seeing in a whole new way. In essence, it gives the F-15 a far greater boost in capability than one would assume just by hearing the phase 'new cockpit.' The situational awareness boost is a game changer.

With the extra weapons stations and new weapons racks, the F-15QA will be able to act as a missile truck, packing up to 22 AMRAAMs on a single mission. Combined with the new cockpit and upgraded sensors, Eagle crews can work as much as 'battle managers' as classic fighter pilots, drawing on diverse combat assets to overwhelm the enemy.

It's amazing to think that as the F-15 approaches its 50th birthday the jet continues to receive new capabilities right off the production line in St. Louis. But the new cockpit—upgraded HUD included—in particular has been a long awaited evolution that will really squeeze the most out of the jet and its new sensors.

Once the feature is flying operationally, it will likely give the USAF a kick in the behind to make new cockpits a reality on their F-15C/D 'Golden Eagles' as well. 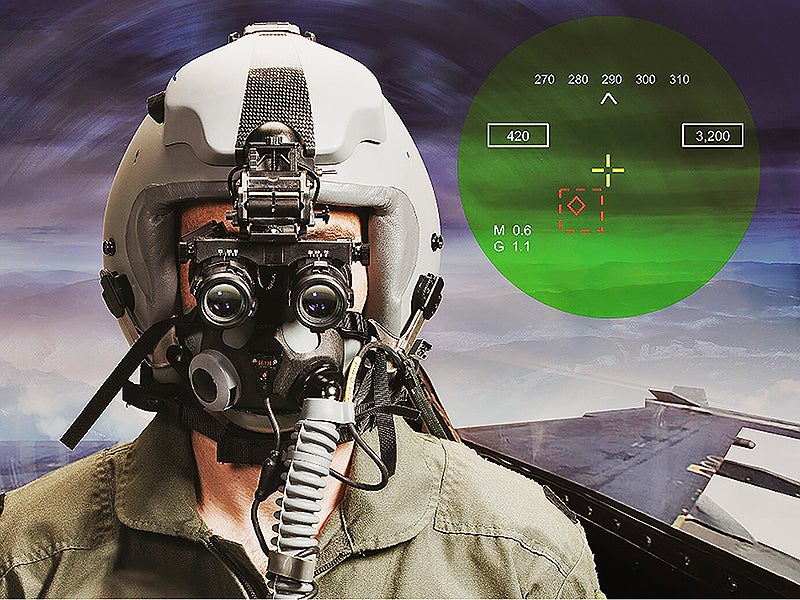 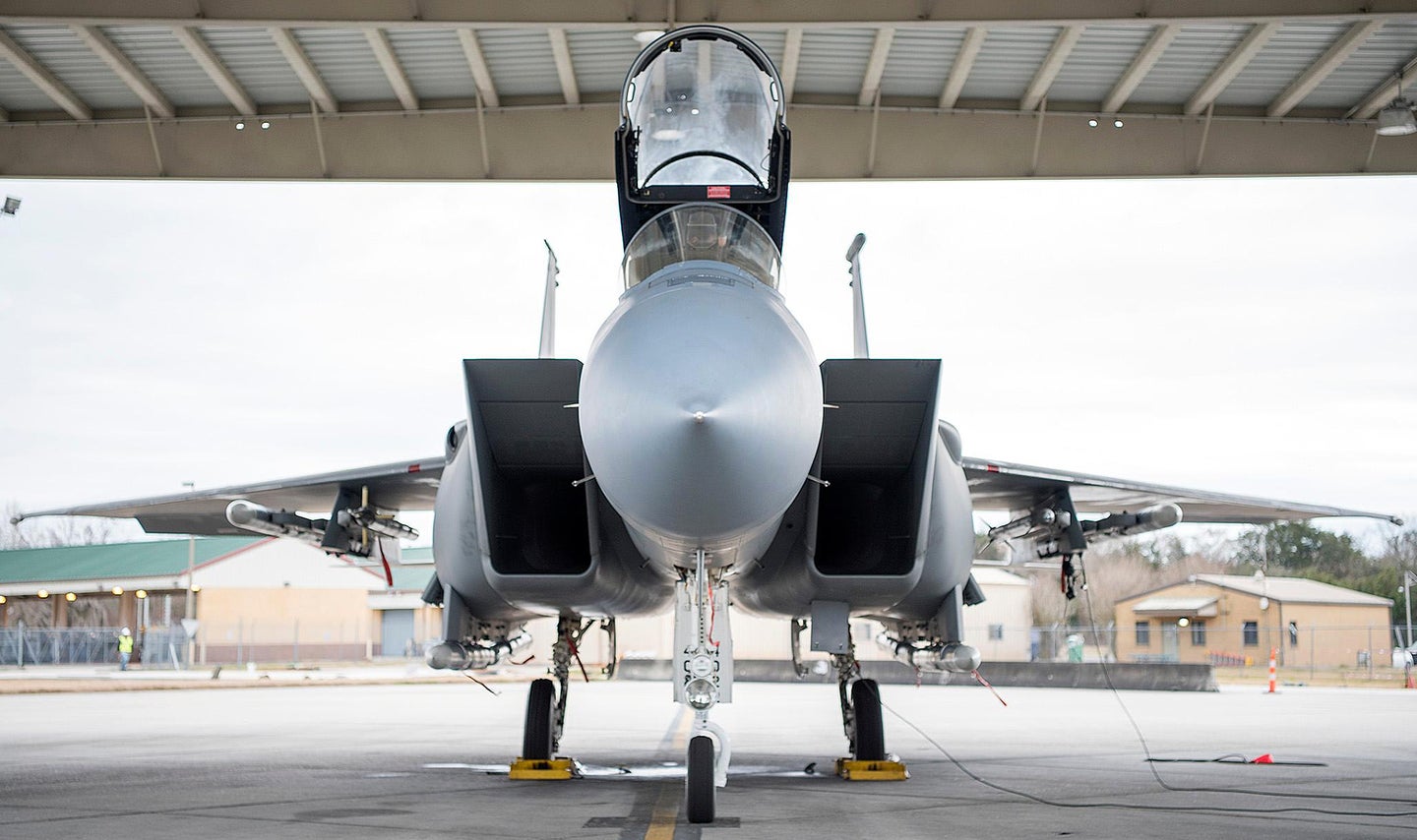