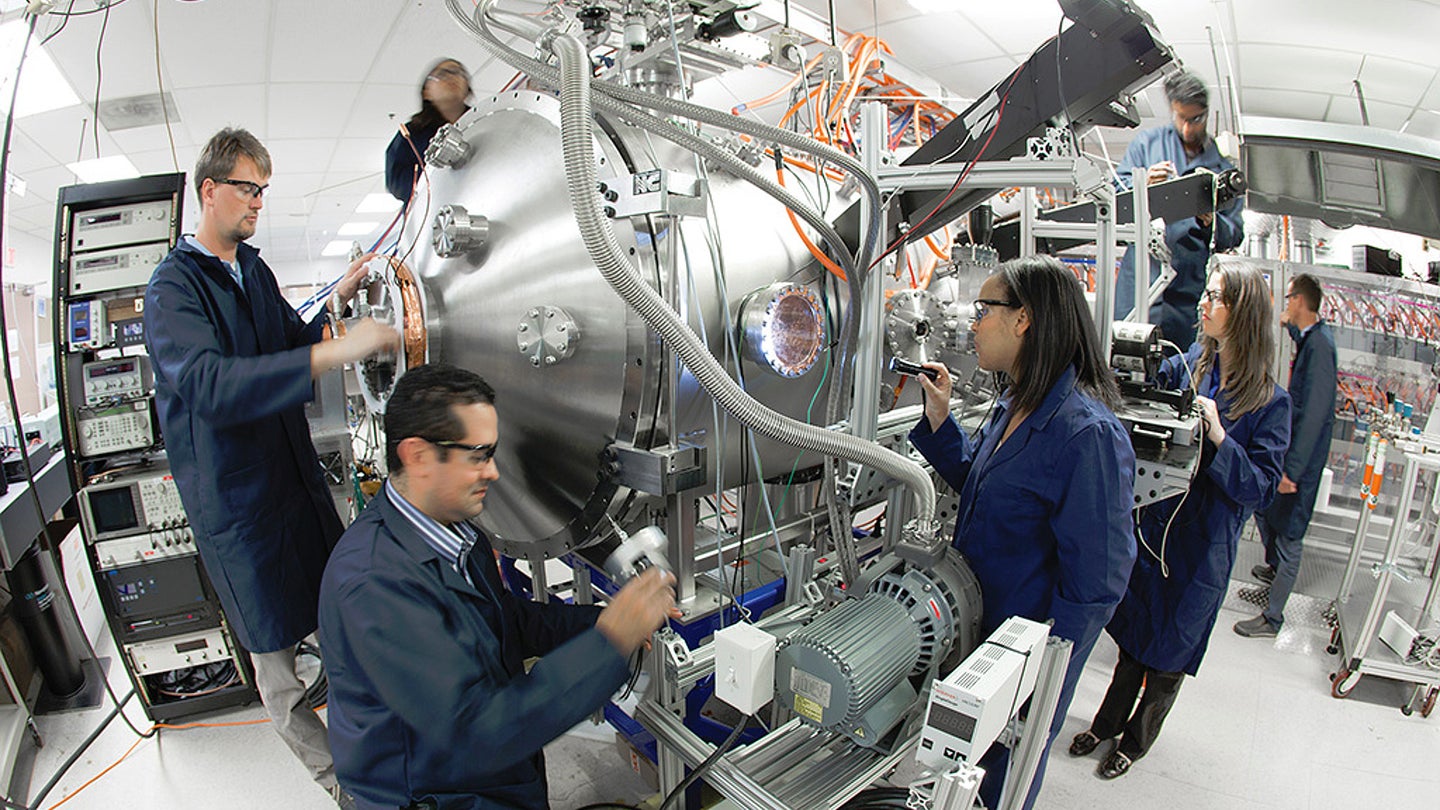 Lockheed Martin has quietly obtained a patent associated with its design for a potentially revolutionary compact fusion reactor, or CFR. If this project has been progressing on schedule, the company could debut a prototype system that size of shipping container, but capable of powering a Nimitz-class aircraft carrier or 80,000 homes, sometime in the next year or so.

The patent, for a portion of the confinement system, or embodiment, is dated Feb. 15, 2018. The Maryland-headquartered defense contractor had filed a provisional claim on April 3, 2013 and a formal application nearly a year later. Our good friend Stephen Trimble, chief of Flightglobal's Americas Bureau, subsequently spotted it and Tweeted out its basic details.

In 2014, the company also made a splash by announcing they were working on the device at all and that it was the responsibility of its Skunk Works advanced projects office in Palmdale, California. At the time, Dr. Thomas McGuire, head of the Skunk Works’ Compact Fusion Project, said the goal was to have a working reactor in five years and production worthy design within 10.

“I studied this in graduate school [at MIT] where, under a NASA study, I was charged with how we could get to Mars quickly,” McGuire said back in 2014 in an interview with Aviation Week. “I started looking at all the ideas that had been published. I basically took those ideas and melded them into something new by taking the problems in one and trying to replace them with the benefits of others.”

Since the 1920s, scientists have been working on fusion reactor concepts, but unfortunately most the functional examples have been inefficient and large – typically the size of small building – as well as exceptionally expensive. For example, the International Thermonuclear Experimental Reactor, which an international consortium is building in France and expects to have ready in 2021, has an estimated total cost of $50 billion and has a design that will weight approximately 23,000 tons.

Below is a video presentation that Lockheed Martin released in 2014 in which Dr. McGuire explains the basics of nuclear fusion and his reactor design.

This has largely relegated these devices to experimental, rather than practical purposes, and confining the reaction – the same one that occurs inside the sun or other stars – is at the heart of the issue. Unlike in nuclear fission, where atoms hit each other release energy, a fusion reaction involves heating up a gaseous fuel to the point where its atomic structure gets disrupted from the pressure and some of the particles fuse into a heavier nucleus.

The process involves the release of a massive amount of energy, a million times more than a typical chemical reaction, such a burning a fossil fuel, according to McGuire. But to do this you need to be able to hold the gas, which is eventually in a highly energized plasma state, for a protracted period of time at a temperature of hundreds of millions of degrees Fahrenheit.

This generally limits the potential for reactors, even large ones, because of concerns they might fail spectacularly. In the 2014 interview with Aviation Week, McGuire used tokamaks, a magnetic confinement device scientists in the Soviet Union first invented in the 1950s, as an example, stating that they had a low magnetic pressure limit under which they could safely operate.

With McGuire's help, the article succinctly explained, at least in theory, how the CFR was supposed to get around these issues:

If the system works, it’s hard to underscore just how dramatically it could change not just the future of warfare, but the basic nature of human existence. Running on approximately 25 pounds of fuel – a mixture of hydrogen isotopes deuterium and tritium – Lockheed Martin estimated the notional reactor would be able to run for an entire year without stopping. The device would be able to generate a constant 100 megawatts of power during that period.

According to the company website on the CFR, the reactor could be powerful enough to run an aircraft carrier, power a plane the size of a C-5 Galaxy airlifter, provide electricity to cities with anywhere from 50 to 100,000 people, and maybe even speed up a trip to Mars. In each case, the compact reactor would take the place of large conventional fuel systems or fission reactors, eliminating weight and bulk. This in turn could create trade space for additional system or carrying capacity in terms of personnel or materiel or potentially allow for a more energy efficient overall shape or design.

For aviation applications, depending on the exact size of the reactor, the system might be able to give a plane unlimited range for its entire lifecycle, with the limit only been the need for food, water, and other life support systems for the crew. High altitude drones with the ability to stay aloft for months or even years at a time could potentially take the place of satellites and other communications relay infrastructure for both military and civilian applications.

This could also translate to persistent surveillance over broad areas where it might otherwise be difficult to monitor things by air, such as in the vast expanses of the Pacific Ocean, more or less indefinitely, which could be useful for tasks range from tracking potential enemy movements to observing changes in animal populations or water temperature.

Those same benefits could apply to vehicles on land, ships at sea, or craft in space, providing nearly unlimited power in compact form allowing for operations across large areas, effectively eliminating the tyranny of distance in many cases. Again, for military applications, unmanned ground vehicles or ships could patrol indefinitely far removed from traditional logistics chains and satellites could conduct long-term, resource intensive activities without the need for large and potentially dangerous fission reactors.

Therein lies perhaps the biggest potential benefits of nuclear fusion over fission. It’s produces no emissions dangerous to the ozone layer and if the system fails it doesn’t pose nearly the same threat of a large scale radiological incident. Both deuterium and tritium are commonly found in a number of regular commercial applications and are relatively harmless in low doses. The small amount of fuel necessary to run a fusion reactor inherently reduces that chances that a leak would contaminate a wide area in the event of an accident.

And since a fusion reactor doesn’t need refined fissile material, its much harder for it to serve as a starting place for a nuclear weapons program. This in turn could make it a more readily exportable and efficient power source, employable anywhere in the world to provide reliable electricity for hospitals, schools, desalination plants, and other important, but often power hungry elements of civil infrastructure.

Fuel would also be abundant and relatively easy to source, since sea water provides a nearly unlimited source of deuterium, while there are ready sources of lithium to provide the starting place for scientists to “breed” tritium. The waste products are much less difficult to manage than those from fission reactors, as well, with the materials remaining dangerous radioactive for hundreds rather than thousands of years.

The system still works by generating heat and using that energy to move a turbine to generate electricity, which means Lockheed Martin could conceivably offer to replace existing fuel sources in powerplants using coal, oil, and nuclear fission with their fusion reactor with relative ease, too. And in an emergency, such as a large natural disaster, truck-mounted reactors could help restore power to entire cities quickly.

Of course, it remains to be seen if Lockheed Martin’s fusion reactor will actually become a reality. Many other companies and institutions have tried for nearly a century to create workable fusion power without success.

On the one hand, a corporation receiving a patent does not necessarily mean they are actively pursuing the technology that the document describes, either. In addition, since the media blitz in 2014, Skunk Works has said very little about this project outside of the plasma physics community. The U.S. government also reserves the right to classify patents it feels might be a threat to national security if they were public, so the fact that this one is not might also calls into question how mature the system might be in actuality.

Still, the that Skunk Works continued to pursue the patent process over the past four years would similarly seem to indicate that they are indeed pushing ahead with the program, at least to some degree. This storied division definitely does have an impressive pedigree when it comes to advanced research and development projects, too. They were also confident enough four years ago to give interviews and offer significant details about the basic reactor design, the projected timeline, and the overall program goals, suggesting that it was a serious endeavor.

Considering the five year timeline Dr. McGuire put out in 2014 for achieving a workable prototype, maybe we’re due for another big announcement from Lockheed Martin in the near future.