Saudi Arabia's capital just came under ballistic missile attack, during which Patriot missile interceptors were launched to intercept. Although it looks like at least one Patriot hit one missile, a missile fragment, or even another missile itself, came careened into the ground, resulting in this amazing video:

The trajectory of the projectile as it approaches the ground is a bit puzzling, it almost looks like it is turning while under control, but it could just be the result of the intercept. Then there is this amazing video of the Patriot missile launches, and it looks like one missile either intercepted an incoming missile at very low altitude or detonated shortly after launch either by command or due to a failure.

Here is what appears to be at least a partially successful intercept:

We still don't know how many ballistic missiles were detected and engaged, or who fired them, but it was almost certainly Houthi rebels in western Yemen. The group has put Saudi Arabia under an increasing threat of missile barrage via ever more capable ballistic missiles that some claim are being provided at least in part by Iran.

Saudi Arabia has ordered a highly elaborate missile shield from the United States in recent months to help defend their territory these types of attacks.

It looks like a Patriot went totally amiss. As we pointed out in the first video, the trajectory looked like a missile was being guided prior to impact.

Once fragment from the engagement:

Yemen's SABA News agency claims the missile fired at Riyadh was indeed a Burkan H2 belonging to Houthi rebels, the same type fired at Riyadh International Airport back in November. It's the most advanced ballistic missile type associated with the separatist group.

The attack may have been part of a larger barrage targeting multiple locales within The Kingdom.

A total of seven missiles were fired in a coordinates ballistic missile attack. Arab News citing a Saudi-led coalition spokesman:

"Three of the missiles were fired toward Riyadh, two toward Jazan, and one each toward Khamis Mushayt and Najran."

One Egyptian worker was killed and two other people were injured as a result of the attacks. The Saudis claim they had intercepted all of the missiles.

CNN states the following regarding targeting:

Targeting of course is a relative term considering the quality of the ballistic missiles fired. 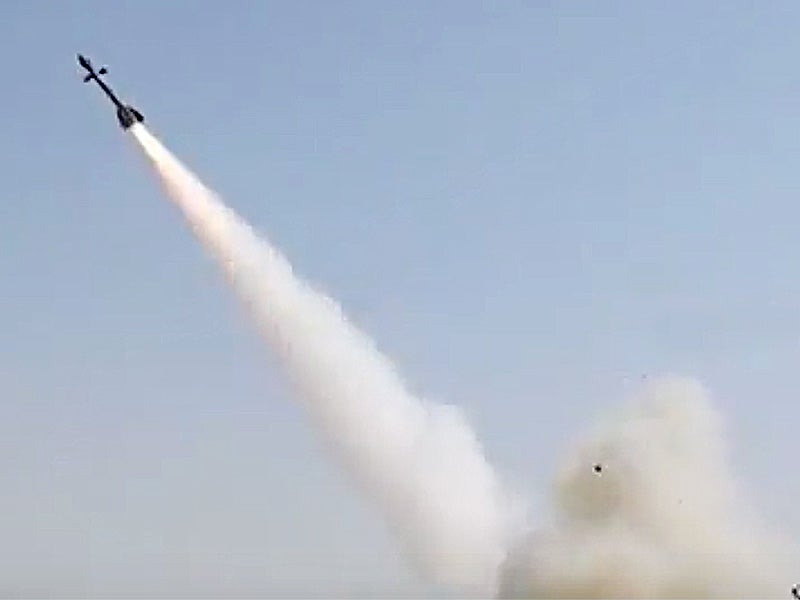