Yet again, President Donald Trump has offered evidence that he may think Lockheed Martin’s F-35 Joint Strike Fighter is literally invisible. What’s worse, the firm’s top executive, Marillyn Hewson, agreed with his remarks and made no attempt to correct him at a time when her company finds itself in increasingly acrimonious negotiations with the U.S. military over the stealth fighter’s costs.

The comments came after Trump signed a presidential memo on March 22, 2018, calling for tariffs and other trade measures against China, which could impact up to $60 billion worth of goods that country exports to the United States each year. Before, during, and since the 2016 presidential election, Trump has repeatedly criticized Chinese trade practices and theft of private intellectual property, which experts believe includes industrial espionage and scooping up data on sensitive military technology. Hewson was on hand for the signing and press conference afterwards, which prompted the president to introduce her – as “Marillyn Lockheed,” with particularly heavy stress on Lockheed – and make the comments about the F-35.

Here’s a transcript of the exchange, which you can also watch below:

Trump: “We buy billions and billions dollars worth of that beautiful F-35. It’s stealth, you cannot see it. Is that correct?”

Let’s be perfectly clear up front, the F-35’s low-observable design does not render it literally invisible to the naked eye. It is possible that Trump was referring to its reduced radar cross section and low-probability of intercept electronic emissions, but we at The War Zone have already documented a number of past cases that continue to indicate the president is talking about potential opponents being physically unable to see the aircraft under any conditions.

In 2017, he told members of the U.S. Coast Guard, which is not expecting to receive any of the jets, the following:

“With the Air Force we're ordering a lot of planes, in particular the F-35 fighter jet, which is almost you know like an invisible fighter. I was asking the Air Force guys how good is this plane, and they said 'well sir you can't see it,' I said yeah but in a fight, you know a fight, like I watch on the movies, the fight, they're fighting, how good is it? 'Well it wins every time because the enemy cannot see it, even if it's right next to it, it can't see it.' I said that helps, that's a good thing.”

Prior to that statement, the President gave a briefing in Puerto Rico concerning recovery efforts following Hurricane Maria, where strangely he told another Coast Guard representative following:

These sorts of statements are both worrying and embarrassing, not least of which because they could easily send the wrong message to our allies, enemies, and the general public. It’s even more concerning given Trump’s propensity to make casual offhand threats of military action in public settings without any clear indication of how serious he might be or other useful context.

If he is basing those kind of statements, and potentially policy decisions, on an inaccurate view of America’s actual military capabilities or other misreadings of events, he might unintentionally put the country in unnecessarily risky situations. It also hurts the United States' credibility for other, more knowledgeable senior officials to have to later clarify or walk back these statements, which might also lead to dangerous confusion about what the actual facts are further down the line.

But even more galling is that it’s increasingly apparent that defense contractors and the U.S. military have become increasingly willing to try and manipulate Trump’s almost juvenile fascination and understanding of weapon systems as a negotiating tool. In front of the cameras at the White House, Lockheed Martin’s Hewson deferred entirely to the president.

It’s not the first time she has done something similar, either. In February 2017, Lockheed Martin issued a statement crediting Trump with reducing the unit costs of all three F-35 variants, sentiments Hewson echoed herself the following month.

“For him [Trump] to focus on the F-35 and to focus on how he can get the best price for the taxpayer going forward, I think, was perfectly appropriate,” she told reporters in March 2017. “He helped accelerate that [the low-rate initial production lot 10 contract] along, and I think he put a sharper focus on price and how we drive the price down.”

It is simply inaccurate to say that Trump was directly responsible for cutting the unit costs and saving hundreds of millions of dollars as he went on to claim. What it did do, though, was hand the president a victory and firmly turn him from an ardent opponent of the stealth fighter, who once said the program’s “cost is out of control,” into an outspoken supporter of “that beautiful F-35."

We saw this again more recently when the White House claimed Trump had saved the American taxpayers nearly $1.5 billion in a deal with Boeing to purchase a pair of new, highly specialized presidential aircraft, commonly known as Air Force Ones. Trump had previously been highly critical of the project and claimed he had shaved at least $1 billion off the price tag. The Chicago-headquartered planemaker lauded the agreement, and the president’s participation, even though the basic math behind the claim just didn’t add up.

Hewson may now feel even less inclined to challenge the president given that her company is locked in unusually bitter talks with the Pentagon over the next F-35 contract, for low-rate initial production lot 11. The head of the U.S. military’s joint program office overseeing the program, U.S. Navy Vice Admiral Mathias Winter, has publicly said he believes Lockheed Martin isn’t negotiating entirely in good faith and that they are being unreasonably recalcitrant about discussing further reductions in the unit costs of all three Joint Strike Fighter variants.

On top of that, Winter and other senior U.S. military officials have increasingly shared their frustrations with other elements of Lockheed Martin’s support of the aircraft, including on-going problems with the aircraft’s computer brain and associated cloud-based computer network, sharing of intellectual property information, and so-called “quality escapes.”

This latter term refers to aircraft that arrive with components or other features that don’t meet requirements and can require costly fixes. These issues can be as minor as contractors drilling holes too wide, but on a stealth aircraft any out-of-spec elements can completely throw off the aircraft’s low-observable qualities. As of March 2018, at least half of the deficiencies the U.S. military discovered with F-35s it had received had to do with stealth coatings or other features, according to Winter.

All told, “the [F-35 unit] price is coming down, but it's not coming down fast enough,” Winter explained to reporters back in February 2018. “I will tell you that I am not as satisfied with the collaboration and cooperation by Lockheed Martin.”

When asked about whether he might decide to get Trump involved in the process somehow, the admiral reportedly said he didn’t think it would be necessary. Having seen how this process works in the past, and knowing a single one of Trump’s trademark Tweets can send ripples through a defense contractor’s stock price, it’s entirely possible the admiral could consider using the president as a cudgel if the negotiations continue to drag on.

This is hardly a functional model for these kinds of negotiations. They also don’t inspire confidence that the actual requirements and demands of the U.S. military to respond to current and emerging threats and potential threats to the country will be the primary driving force behind any final decisions.

As The War Zone’s Own Tyler Rogoway wrote in November 2017:

“His almost child-like view of tactical aircraft capabilities in particular is also a massive blessing for U.S. defense contractors who are in increasingly close orbit with the White House. Someone with this level of comprehension about complex weapon systems does not represent a good negotiator or strategist when it comes to procurement decisions and setting up America's military capabilities mix. Instead they represent an easily persuadable mark with the power to make or break major defense deals worth billions of dollars. And those defense contractors are playing ball when it comes to feeding the President's ego with great results to show for it.”

Of course, one shouldn’t forget that Trump has done his fair share to foster this negotiating environment for major defense programs by insisting on personally and publicly injecting himself into a series of high-profile

pet projects in the first place. That's not necessarily to defend contracting processes across the government, especially within the U.S. military, which can be anything but functional in their own right.

There is definitely a need for acquisition reform on a variety of levels within the Pentagon, but this method of engaging with defense contractors is part of the problem. It's one issue that candidate and then president-elect Trump had himself suggested he would work to resolve, but something he unfortunately does not appear to have been able to put into practice.

As to being able to see the F-35, we hope that someone will eventually make sure the president understands that the aircraft isn’t actually invisible. 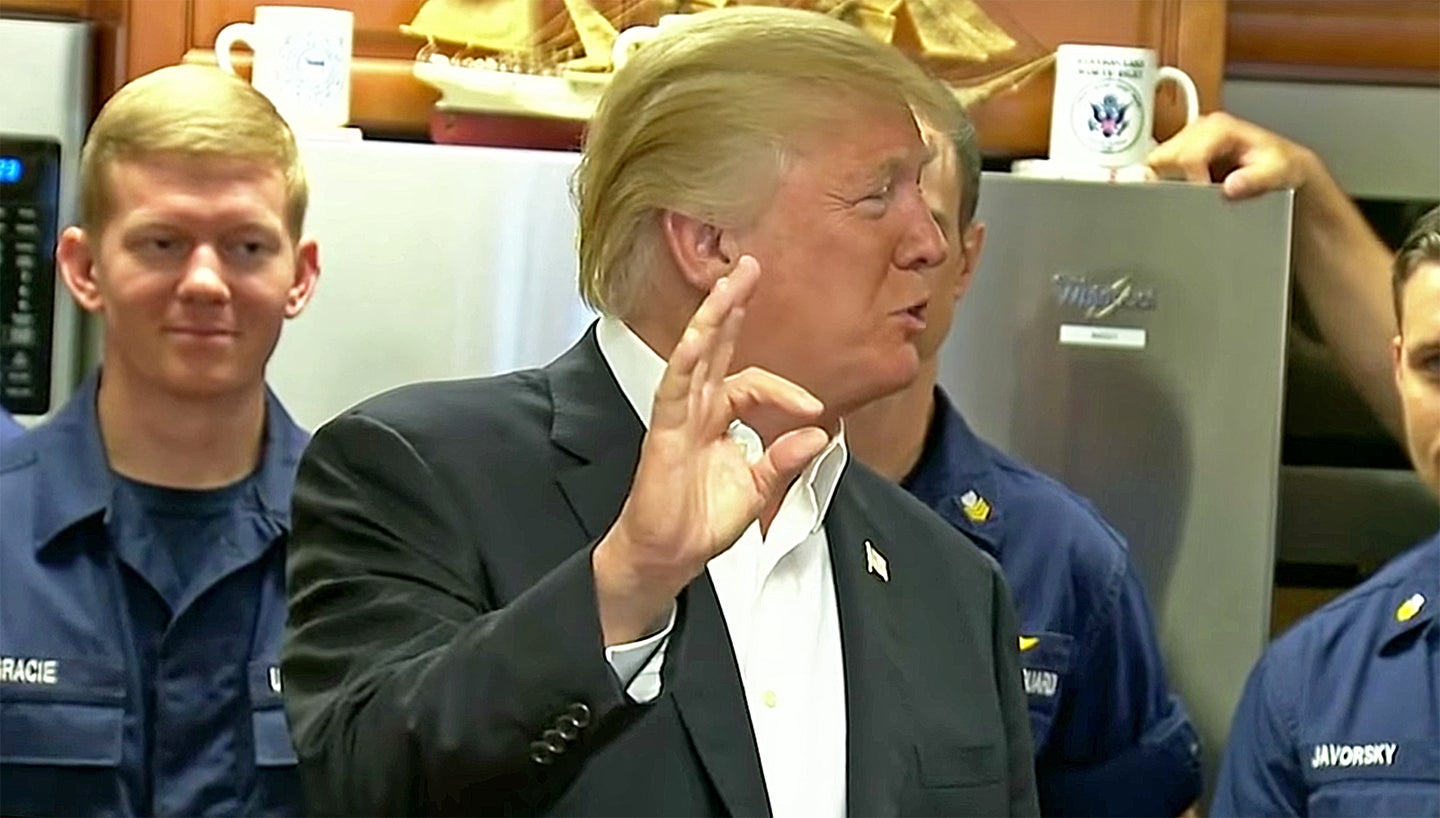 For some reason POTUS loves to talk F-35 with Coasties. 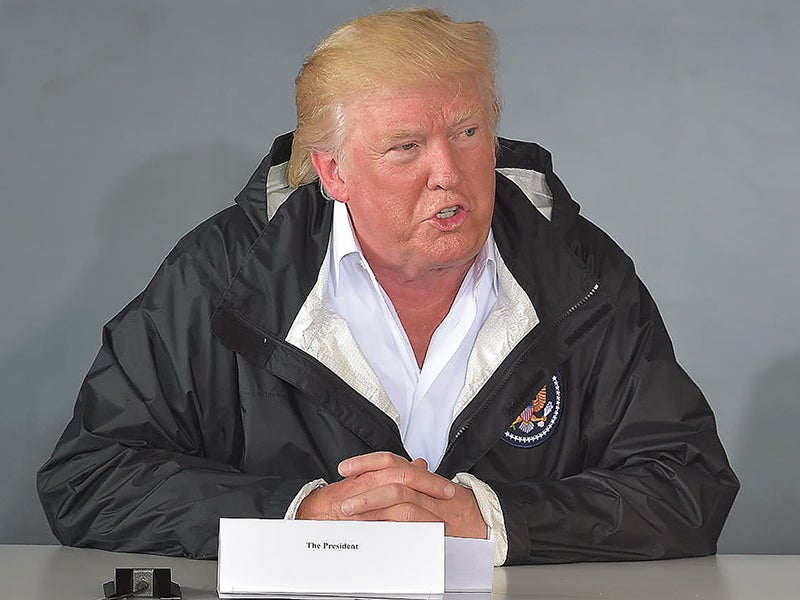