The upgrade represents a massive boost in combat capability for the USMC's healthiest legacy Hornets. 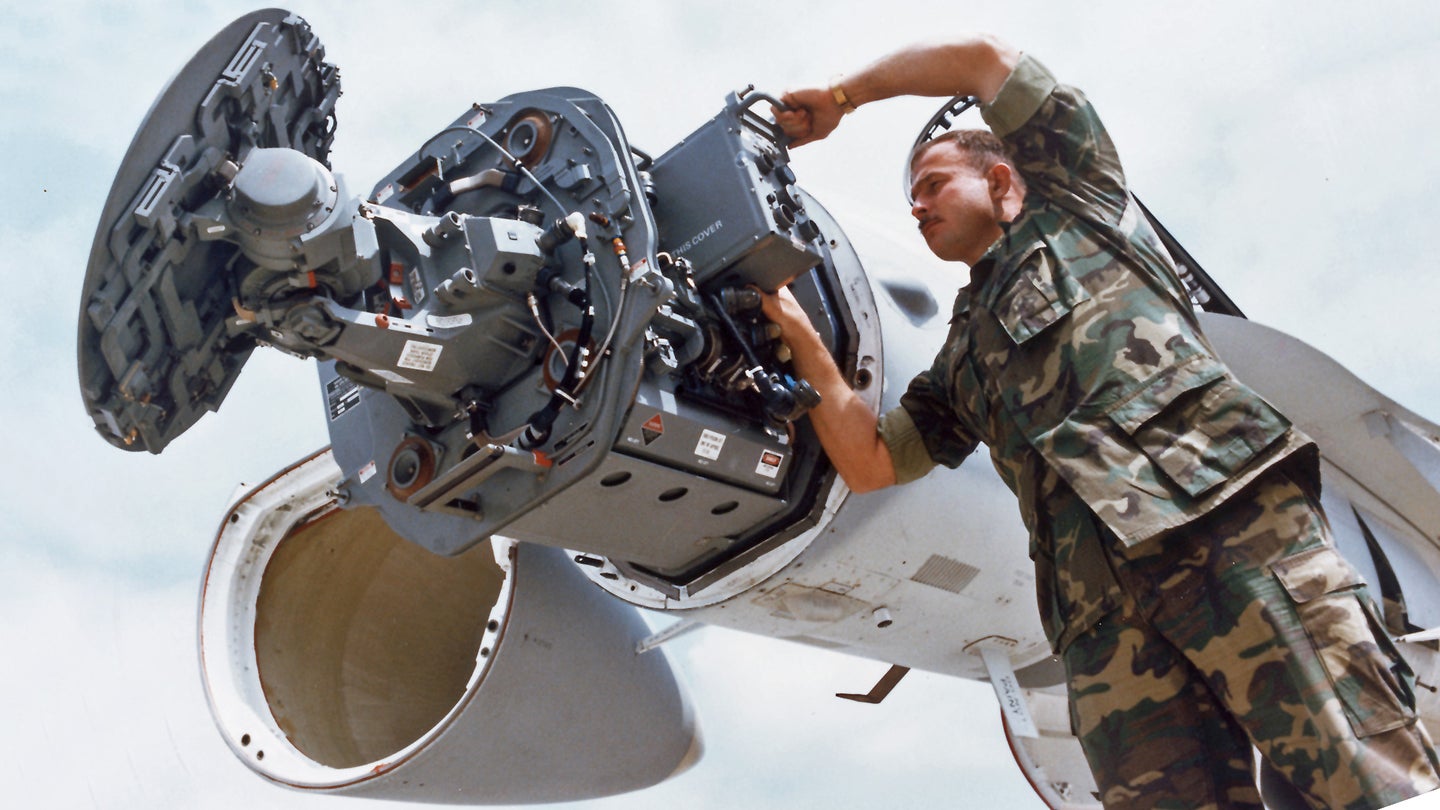 With a new Navy plan to retire nearly half its F/A-18A/B/C/D fleet in the near term to help boost the readiness of its youngest so called "legacy Hornets," which the USMC will inherit in the not so distant future, the Corps is now moving to upgrade seven squadrons worth of jets with new active electronically scanned array (AESA) radars. The move signifies the most substantial capability upgrade in the legacy Hornet's entire history.

In a posting on the government's contracting site FBO.gov it states that the USMC is looking to install the systems "in 4th Quarter 2020 and complete in 4th Quarter 2022, for fielding of a total of 98 systems (7 fleet squadrons retrofitted with 14 replacement radars each."

These 98 Hornets stand to be the most capable of their kind once upgraded as an AESA array gives a fighter a slew of enhanced abilities. These include drastically enhanced detection and tracking ranges, target discrimination and identification, the ability to spot low-flying reduced radar cross-section targets like cruise missiles, as well as the capability to rapidly scan huge volumes of airspace as AESA radars do not rely on a mechanically steered radar dish to do so.

AESA radars and their powerful backend processing abilities can also "interweave" air-to-air and air-to-ground radar modes simultaneously, drastically increasing a fighter pilot's situational awareness and defensive capabilities. Even electronic attack and long-range communications are secondary capabilities of an AESA array, the former of which could be intrinsic to the jet's battlefield survivability in the years to come.

But maybe most important is that AESA's are far more reliable than their mechanical scanning counterparts. And the supportability of the existing AN/APG-73 radars is becoming a big concern for the USMC. The contracting notice reads:

"The AN/APG-73 is installed on F/A-18 C/D aircraft. The APG-73 has been subject to ongoing maintainability, supportability, and readiness issues. To alleviate these issues, the USMC is pursuing a replacement to the APG-73. Active Electronically Scanned Array (AESA) solutions are required due to the increased reliability and sustainability requirements as well as the associated capability improvements."

The F/A-18A Hornet was originally fitted with an AN/APG-65 radar, which is lighter and less capable, especially in air-to-ground modes, than its successor, the AN/APG-73 which appeared during the F/A-18C's production run. The earliest F/A-18E/F Super Hornets were built with the AN/APG-73 as well, but Raytheon's AN/APG-79 AESA radar system quickly became a prime feature of the Super Hornet and Growler, and the radar sets were back-fitted to earlier Super Hornet jets.

The USAF has followed a similar upgrade path as of late as what the USMC is proposing. The F-22 Raptor was the first to field and AESA array in the form of the AN/APG-77. Today a large portion of the F-15C/D fleet has been upgraded with the highly powerful AN/APG-63V3 radar system. The F-15E is also getting a very similar radar from Raytheon, albeit one optimized for multi-role missions, called the AN/APG-82.

Some of the USAF's F-16C/Ds are set receive an AESA arrays as well in the form of the modular AN/APG-83 Scalable Agile Beam Radar (SABR) built by Northrop Grumman. Raytheon also has a similar modular radar design called the AN/APG-84 Raytheon Advanced Combat Radar (RACR). These two radars are likely to compete directly for the USMC's Hornet upgrade initiative just as they did for the F-16's upgrade program, albeit that was an internal Lockheed decision. But Raytheon appears to have an advantage in this case as they are the sole supplier of radars to the Navy's Super Hornet fleet and they have even demonstrated how easily their RACR AESA array can be fitted on an F/A-18C (see video below).

The contract announcement also has terminology that seems to give Raytheon a massive leg up over the competition:

"Requirements include expertise in the design and integration of AESA radar systems, specifically on F/A-18 C/D platforms to ensure size, weight, power, and cooling requirements are met with no change to the established aircraft interfaces. Familiarity with F/A-18 C/D mission computer interfaces will be required to meet the retrofit schedule stated above... Hardware commonality with existing USN and/or USMC radar programs of record is required in order to reduce support and sustainment costs."

Other possible candidates do potentially exist, including Israel's Elta 2052, Sweden's Selex's unique ES-05 Raven, and other adaptations of existing foreign fighter AESA arrays like Euroradar's CAPTOR-E, albeit these companies would have to pair with a domestic contractor to compete.

Regardless of who wins, the 98 jets that get this upgrade will become far more formidable and will likely become the last front-line legacy Hornets in the Pentagon's inventory in the decade to come. The radar upgrade could also attract interest from other Hornet operators who may look to prolong the life of their fleets instead of buying replacement aircraft.

Finland, Switzerland, Spain, Australia and Canada also fly the legacy Hornet. Canada in particular may jump on the concept if the USMC moves forward as they look at stretching their Hornet fleet's lifespan to the max as a result of continued delays in procuring a new fighter aircraft. An AESA upgrade would also make full use of the AIM-120D AMRAAM missiles they have been cleared to purchase.

The upgrade could also be packaged with a structural life extension and other upgrades, such as a new digital electronic warfare suite and cockpit displays, for air arms looking for bargain 4.5 generation fighter capability on the second-hand market.

If anything else, further radar upgrades to more legacy Hornets in the USMC's and Navy's stable could provide a far more capable adversary support aircraft for aggressor squadrons. Currently both VFC-12 and VFA-204, as well as the Naval Air Warfare Development Center, fly legacy Hornets as aggressors and what aircraft will replace them has become an increasingly pressing issue both in the Navy and Congress.

Regardless of if the program leads to additional upgrade prospects or not, it's good to see the USMC investing into its largely neglected legacy Hornet fleet, and it will be exciting to see this final, ultimate F/A-18C configuration as the type enters into the twilight of its nearly four decades long career.