The Navy's two hospital ships are expensive to operate and maintain, but offer capabilities found in no other Navy in the world. 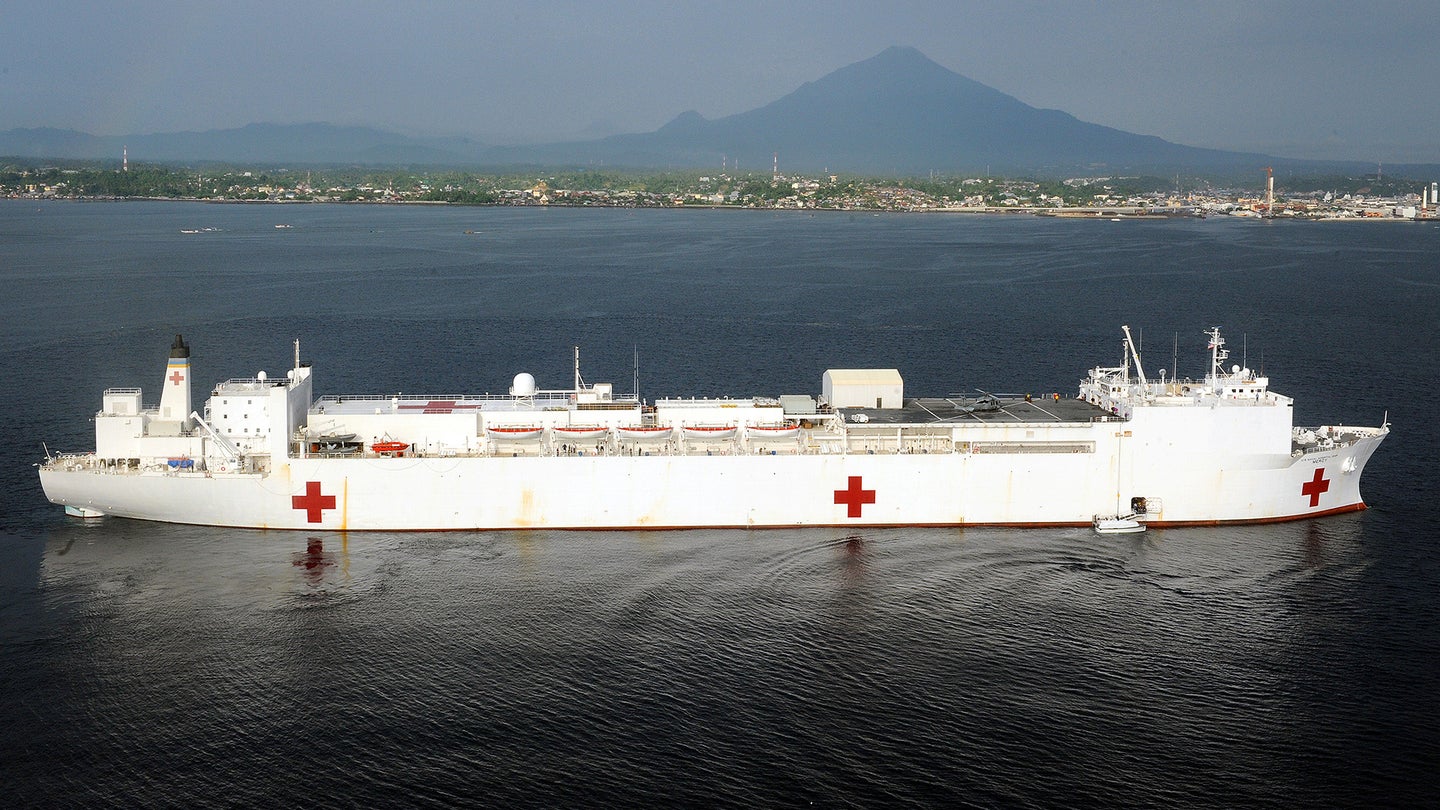 Faced with growing difficulties sustaining and modernizing its existing fleet, the need to address the underlying issues behind a spate of deadly accidents and other controversies, and a desire to increase the total number of ships in its inventory, the U.S. Navy has many different priorities to balance when it put together its latest budget request. But at least one part of its new, broad plans, includes a decision to retire one of its two unique hospital ships, possibly as early as the end of 2019, a move that has already rankled some members of Congress.

At present, the Navy has two large hospital ships, the USNS Mercy and USNS Comfort, which it received in 1986 and 1987 respectively. Converted from oil tankers, each of the nearly 900-foot long ships displaces more than 69,500 tons and has a crew of more than 1,200 individuals when operating at full capacity. Both are part of Military Sealift Command, the service’s hybrid military-civilian logistics and support arm, which is itself under the operational control of U.S. Transportation Command, or TRANSCOM.

“I’m a big fan of hospital ships, because I love the fact that we can help injured and ill [service] members,” U.S. Air Force General Darren McDew, head of TRANSCOM, told legislators during a hearing on March 8, 2018. This position immediately seemed to clash with the Navy’s plan to put Mecry or Comfort in mothballs sometime over the next 18 months.

It’s undeniable that the ships provide the U.S. military with an impressive capability. Their primary mission is to support expeditionary operations, especially U.S. Marine and Army amphibious operations, as well as naval surface task forces.

Those forces may have their own organic medical elements, but lack the ability to provide more specialized or intensive care or are otherwise operating far removed from appropriate facilities. Maneuver combat elements would certainly be unable to provide anywhere close to the services at Mercy and Comfort can and definitely not at anywhere near the same scale.

Each of the two ships can accommodate 1,000 patients in total, including 80 in intensive care. There is a landing pad amidships so helicopters can rapidly deliver casualties and there is a hangar area to embark Seahawk helicopters as well.

The ships are designed to be stable enough for surgeons to perform their delicate work in any of 12 operating rooms. There are a host of other specialized facilities, including burn wards and dental suites. Medical staff on board have laboratory, MRI and x-ray equipment to diagnose patients and there is a blood bank and oxygen generating plant. The two vessels even have their own morgue to securely store the dead in a dignified manner if necessary.

Without these hospital ships nearby, U.S. forces on land or afloat could have to rely on far less capable mobile field hospitals or the ability to rush seriously wounded individuals, likely via aircraft, to more established facilities far away. Having to airlift personnel to larger hospitals, such as the United States’ Landstuhl Regional Medical Center in Germany, a major American medical hub overseas, requires significant resources, and considering a whole region may be a combat zone, it may not be possible at all.

“I’ll tell you, for every one hospital ship we’re short, we’re going to have a requirement for 479 air-refueling tankers,” General McDew told lawmakers. That notional tanker force reflects what it would take to support the amount of medical evacuation aircraft it would take to handle the same number of casualties as Mercy or Comfort.

It also potentially increases the time it might take for an individual to reach a properly equipped treatment facility. This could easily be a matter of life and death, especially in regards to trauma care. Medical professionals often refer to the “golden hour,” which refers the understanding that individuals have the best chance for surviving serious, potentially life-threatening injuries, and do so without any complications or lasting effects, if they can receive adequate care within 60 minutes. And though there is a debate about whether or not the firm 60-minute rule actually makes a difference, it is a truism that getting patients treated as fast as possible generally improves their chances for a full recovery.

The video below gives an overview of the facilities available on board both Mercy and Comfort.

Both ships deployed to the Middle East during the first Gulf War between 1990 and 1991. Mercy reprised that role during the opening stages of the invasion of Iraq in 2003.

Beyond their combat mission, Mercy and Comfort a serve important secondary roles as an on-call tool to respond to natural disasters and other crises involving mass casualties, at home and abroad. One of the two ships have been on hand to aid in disaster relief efforts in the Caribbean, Southeast Asia, and the continental United States, among others locations. Most recently, Comfort deployed to Puerto Rico following the devastating Hurricane Maria in September 2017.

And in the same way an aircraft carrier represents a clear and visible display of America’s ability to project combat capability, the big, white hospital ships show off the country’s best humanitarian qualities. This sort of “soft power” can be a valuable tool for advancing U.S. interests abroad.

So, in addition to being on call for military operations and other contingencies, the Mercy, with its home port in San Diego, California, has routinely taken part in the Navy’s Pacific Partnership cruises. These involve various American military ships making stops in various allied and partner nations across the Western Pacific civic and other humanitarian assistance activities, including providing free medical care in remote or otherwise under-served areas. Members of foreign military forces, non-governmental organizations and volunteers also take part. From its home port at Naval Station Norfolk in Virginia, Comfort has performed similar missions in the Western Hemisphere.

“I was recently in Djibouti and noticed that the Chinese actually had a hospital ship in port over there, and they’re delivering services,” Austin Scott, a Republic Representative from Georgia said in defense of keeping both ships in service at the hearing on March 8, 2018. “For the U.S. to pull back on that soft power side, I think it’s just a – I think it’s a strategic mistake for us.”

But while they have proven their worth in many instances and offer unique military and diplomatic benefits, that capability doesn't come cheap. In its 2019 fiscal year budget proposal, the Navy asked for just over $120 million to sustain both ships and their on board facilities, a figure equal to three percent of what the service expects to spend in total operating on maintaining its nearly 300 other ships, including 11 aircraft carriers.

In its budget request for the 2019 fiscal year, the Navy says it will be able to save more than $23 million just by having Mercy operate at a so-called “reduced operating status,” or ROS, for 150 of the year’s 365 days.

However, putting the ship into ROS leaves it with a skeleton crew of just 70 individuals, less than a tenth of its full compliment. This means it would take significant time and effort to get the ship to full operating status if necessarily in an emergency, which in turn calls into question whether it’s beneficial to keep it in this condition at all.

Though long-standing, the debate about how difficult it can be to deploy these ships became particularly pronounced when it took Comfort two weeks to get ready and sail to Puerto Rico after Hurricane Maria struck in September 2017. The storm caused significant damage and knocked out power across the island, limiting the ability of existing hospitals to function properly.

Apparent confusion about how to best utilize the ship kept it off shore for another three weeks. During that period, the ship took in just a few dozen patients, all of whom had to find a way to hop a helicopter or boat ride out to the ship. When it finally did pull into the Port of San Jose, nearly 40 days after leaving its home port, the patients flooded into its facilities.

Even then, though, there are concerns about the relatively high costs of that treatment. The costs associated with Mercy and Comfort can translate to per patient treatment costs ranging from $10,000 to more than $30,000 during certain missions. For comparison between March 2014 and December 2015, Médecins Sans Frontières (MSF), a non-governmental humanitarian aid agency also known as Doctors Without Borders, spent approximately $12,400 per patient while helping to contain the West African Ebola epidemic.

In addition, it’s worth noting that MSF’s effort in that case required atypical and significant expenditures on secure facilities, protective gear, and other specialized equipment due to the particularly virulent nature virus in question. The total cost covered distributed operations across three countries, including more than a dozen individual management centers to identify and quarantine sick individuals, as well. Neither Mercy nor Comfort supported the American military’s response to this epidemic, which relied heavily on medical units ashore operating similarly secure clinics and laboratories, as well as specialized contractor-operated aircraft.

Still, the cost to keep both Mercy and Comfort on active duty is the price one pays for having that kind of unique capability. With the possible exception of China, no other navy in the world operates hospital ships with anywhere near the same capacity. The sole Chinese Type 920 hospital ship, a converted cruise ship with a similar dual military and civic-action role – taking on the names Daishan Dao and Peace Ark during war and peace respectively – can still only accommodate 600 patients in total, far less than its American counterparts.

And having just one ship in service could dramatically reduce the ability the Navy’s ability to deploy this capability where and when it might be most necessary. Having one ship on each coast adds important flexibility and having a pair of them at all simply improves the chances that at least one will be operational in a crisis.

“If the requirement is two, we have to have two or either we have to be screaming loudly,” Representative Trent Kelly, a Republican from Mississippi, who also brought up Comfort’s deployment after Hurricane Katrina in 2005, said at the hearing in March 2018. “We have an obligation to our soldiers, sailors, airmen and Marines, and also the civilians across this world… Because there will come a time when we need that [hospital ship capability] and we need to always be ready.”

Considering the Pentagon's strategic pivot towards the Pacific region, where the "tyranny of distance" will be a major tactical barrier to overcome, and where highly dispersed "maneuver warfare" operations will be the name of the game, putting soldiers thousands of miles from traditional medical facilities, the Congressman's words seem especially relevant.

Additionally, considering the Navy is building huge mobile sea bases with such dispersed operations in mind, it seems that there would be no more relevant a naval capability to go along with such a strategy than large hospital ships—ones that during a time of war could service a region where brick and mortar hospital facilities simply do not exist.

With all this in mind, it seems that the decision to largely retire one of these vessels is extremely nearsighted, counter-intuitive to the Navy's future battle doctrine and could have horrible consequences should an war erupt.

Ultimately, Congress will have the final say about whether or not to approve the Navy’s plans in the defense budget for the 2019 fiscal year. They’ll have to decide whether or not having both Mercy and Comfort on active duty is truly worth the cost.