The HH-60G is the USAF's primary combat search and rescue helicopter and are known to be active in the region. 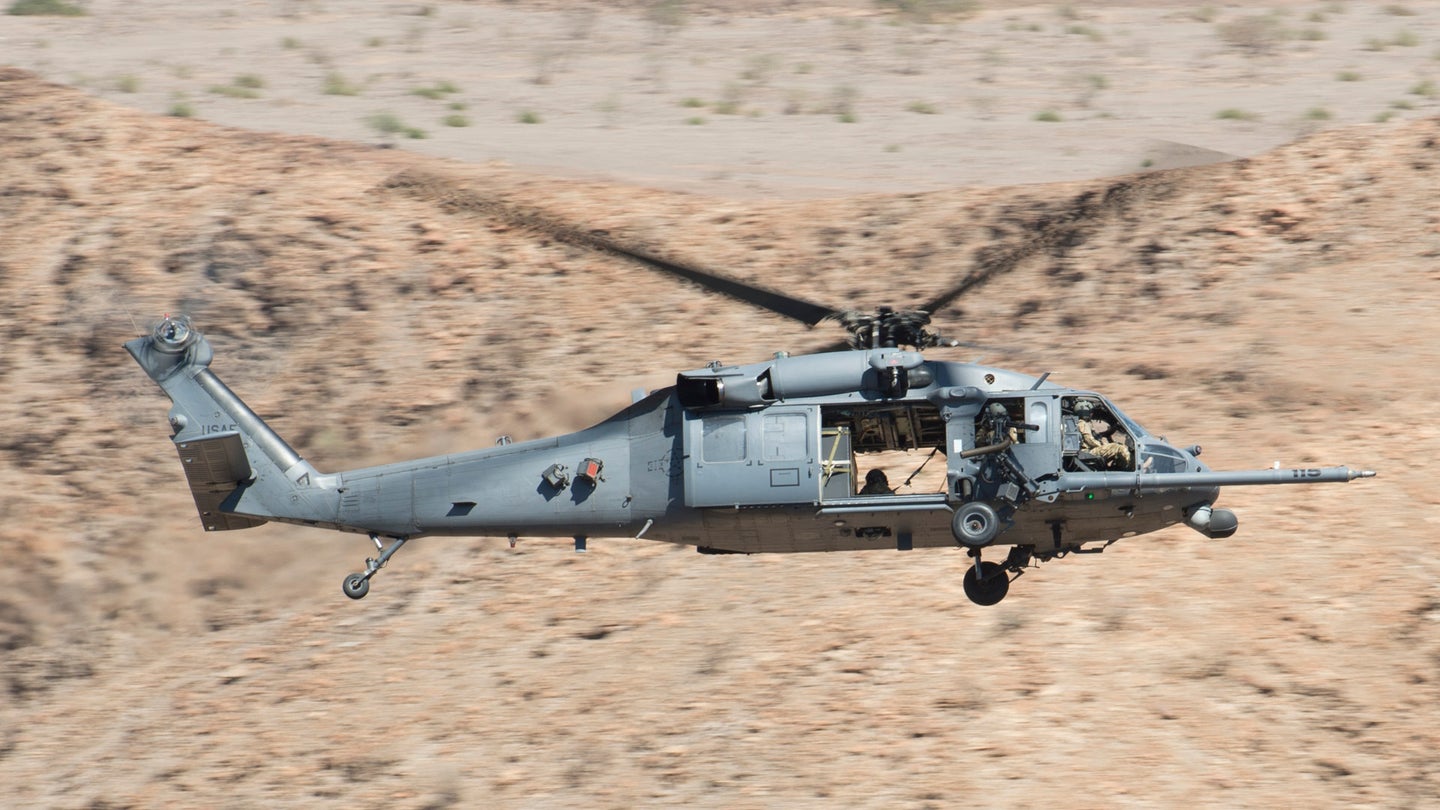 Details are still thin, but there are emerging reports that a U.S. Air Force HH-60G Pave Hawk combat search and rescue helicopter has crashed near the city of Al Qaim in Iraq's Anbar Governorate, which sits right on that country's border with Syria, killing all seven individuals on board. If confirmed, this could be the United States' first fatal helicopter since it began operations in the region against ISIS in 2014.

Initial reports suggest the helicopter suffered an accident rather than getting shot down. The very first reports that the aircraft in question was a CH-47 Chinook or a variant thereof appear to have been in error. The main U.S. task force leading the international coalition fighting ISIS in the region has so far declined to identify the type of aircraft or who it belonged to and said it was still working to determine the cause of the incident.

The area around Al Qaim in Iraq and the city of Al Bukamal on the opposite side of the border in Syria has been the site of fighting in the past, including a reported helicopter-borne assault against ISIS on the Syrian side in 2016. More recently, the Iraqi government has been working to clear remnants of the terrorist group out of Western Anbar in general. U.S. conventional and special operations forces, as well as members of the American led coalition, continue to support Iraqi and Iraqi Kurdish elements in those operations. So it would not necessarily be surprising for American helicopters to be in the area for any number of reasons.

The U.S. Air Force has HH-60G Pave Hawks forward deployed at various locations in the region, including a site in neighboring Turkey. It is possible that the aircraft suffered some sort mishap as the result of either mechanical fault or human error. Helicopters can have difficulty operating in extremely hot temperatures, which can cause a sudden loss of lift, and in sandy and dusty conditions where the crew might lose spacial awareness, conditions that are common in Anbar.

There have also been increasing concerns about potential threats to helicopters from terrorists and other militants in the region who have access to shoulder-fired man-portable surface-to-air missiles, commonly known as MANPADS, and automatic cannons, and heavy machine guns, all of which can be dangerous to low- and slow-flying aircraft. The a recent Pentagon report that it released earlier in 2018 revealed the U.S. Army had been having difficulties adding additional defenses to its own UH-60 Black Hawk helicopters, among other types of aircraft.

The USAF is finally working towards replacing the tired HH-60G Pave Hawks with a new Black Hawk variant, the HH-60W, but none of these new helicopters have been delivered yet.

The incident comes just a day after the US Navy lost a Super Hornet while on approach to NAS Key West, killing both crew onboard.

Once again, these details could change as more information becomes available. We will be updating the page throughout the evening.

We still have no hard reports regarding the status of those onboard, but we do know that seven souls were flying on the helicopter during a mission heading into eastern Syria. The outlook looks grim with multiple sources reporting that fatalities are expected.

The top U.S. military task force in charge of operations in Syria and Iraq has sadly confirmed that all seven individuals aboard the HH-60G perished in the crash. According to an official statement, the crew of a second Pave Hawk flying together were the ones to first to report the crash and a quick reaction force including both American and Iraqi personnel subsequently secured the site. The full press release is available below.

There remains no indication that enemy forces brought the helicopter down and the mishap may have been the result of it hitting an overhead powerline in the the dark. Wire strikes are a significant danger for low-flying helicopters, especially at night.

We will continue to update or follow-up as more information becomes available.