The Air Force May Have Retired The Predator, But It was the Army That Blazed Its Trail

An obscure Army military intelligence outfit dominated the early years of the program, helping demonstrate the drone in a host of different roles. 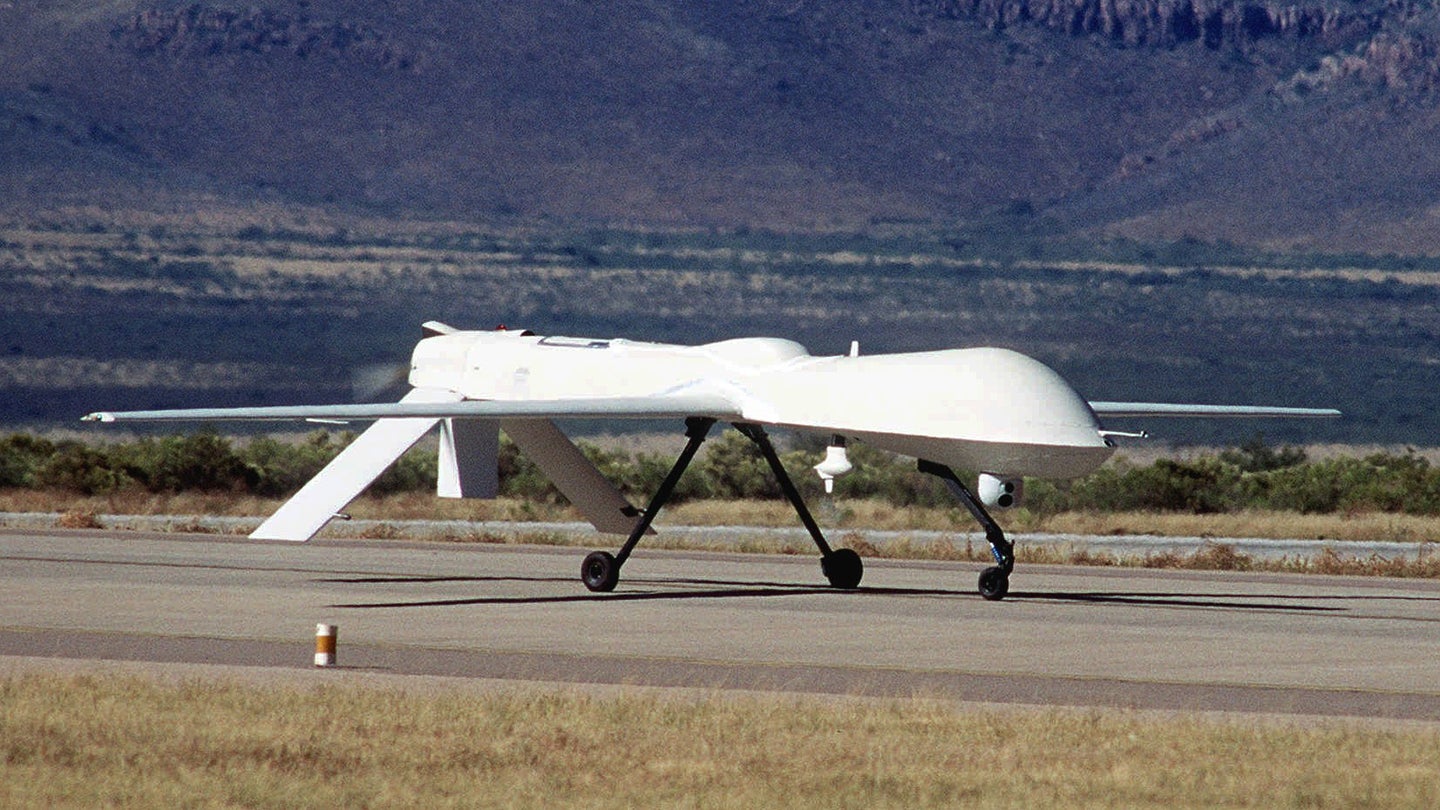 The U.S. Air Force has officially retired the MQ-1 Predator, which had come to be an icon of important if often controversial impact in how American prosecutes war around the world. But often lost in the discussions of how the drone changed the face of warfare, both in the air and on the ground, is its early history with an entirely different service, the U.S. Army.

The program officially began in January 1994 as a so-called “Advanced Concept Technology Demonstration,” or ACTD, to explore the potential of a long-endurance, medium-altitude unmanned aircraft. For more than two years, the U.S. military’s only operational Predators, originally known as RQ-1s, were attached to a unique and obscure Army unit called the Military Intelligence Battalion (Low Intensity) situated in Orlando, Florida.

And though a Joint Program Office that included representatives from all the U.S. military services managed this effort in cooperation with the Pentagon’s Defense Reconnaissance Office (DARO), the Army dominated the project overall. Before the Air Force took control in September 1996, that service “had no significant involvement in the ACTD process other than sending one pilot to fly the air vehicle,” according to Dr. Thomas Ehrhard’s official 2010 monograph Air Force UAVs: The Secret History.

At first glance, it might seem odd for the Army, focused on ground operations, to have been so proactive in the Predator’s early history, but it is less so when one considers the service’s contemporary history. By 1994, it had spent the better part of the last three decades both preparing to fight a large-scale conventional conflict in Europe against the Soviet Union, supporting quasi-covert counter-insurgency operations against Communist rebels in Latin America, and becoming increasingly involved in the War on Drugs at home and abroad.

Then in 1991, it had helped eject Saddam Hussein from Kuwait and crushed Iraq’s military in the first Gulf War. But during that conflict, Iraqi forces had still been able to use mobile transporter-erector-launchers, or TELs, along decoys and other tactics, to rapidly move Scud short-range ballistic missiles around and launch them into neighboring countries with virtual impunity.

“There is no technical evidence that a single TEL was actually destroyed during the war,” U.S. Air Force Colonel Mark Kipphut noted in research report that the service re-published as an official monograph in 2003. “Iraqi launch operations never stopped.”

So the service had long had clear and demonstrable requirements for persistent aerial surveillance capabilities, particularly to help monitor enemy movements and direct air and artillery strikes, all in support of friendly operations on the ground. These same realities, combined with its then relatively recent experience of hunting guerrilla forces in Southeast Asia, had led the Army to begin laying the groundwork for Military Intelligence Battalion (Low Intensity) all the way back 1985.

That year, the service established what it then called the U.S. Army Echelon Above Corps Aviation Company at the Naval Air Engineering Center, Lakehurst in New Jersey. This unit was supposed to form a single home for various aerial intelligence gathering platforms, including the RG-8A powered glider, which you can read more about here, and a drone project nicknamed Gray Wolf, with its primary focus being on ongoing operations in Latin America.

Gray Wolf – not to be confused with the Air Force's new project of the same name – was the name given to a small number of Development Sciences R4E-40 Sky Eye drones, which could carry early generation electro-optical or infrared video cameras or traditional 35mm cameras. Though relatively advanced for their time and able to fly pre-programmed routes, these unmanned aircraft needed to be within 80 miles of the ground control station to receive commands or send back video in near-real time.

In the late 1980s, the Army had also helped DARPA test the capabilities of Leading Systems, Inc.’s Amber drone, which offered significant more range, could fly at a much higher altitude, and for much longer periods than older systems such as the Sky Eye. Amber evolved into the Gnat-750, which in turn served as the basis for the Predator. In 1990, General Atomics purchased Leading Systems, becoming the name most associated with the iconic unmanned aerial vehicle.

One of Predator’s most important enhancements over the early designs was the addition of a two-way satellite datalink. This allowed operators on the ground to directly control the aircraft throughout its mission and get video, imagery, and other information in near-real time, even at extended ranges.

With its own prior experience with unmanned aircraft, the Predator was in many ways a natural fit for Military Intelligence Battalion (Low Intensity), even though it was primarily flying manned surveillance aircraft, including specialized versions of the four engine de Havilland Canada DHC-7 and twin-engine Beechcraft King Air,  when the drones first arrived in 1994. Army Warrant Officers with backgrounds flying helicopters joined a smaller number of Navy reserve aviators with intelligence experience to form the initial cadre of pilots, along with the single individual from the Air Force.

Formal training on the Predator did not start until October 1994 and ran through January 1995. For the next year, though, the Army-led team showed off the new drone as an important capability for both conventional and other more specialized operations.

Between February and March 1995, the unmanned aircraft flew simulated border patrol and counter-drug missions in and around the United States. Then, in April, the pilotless planes headed to Fort Bliss, Texas to take part in a routine air and missile defense drill nicknamed Roving Sands.

There they practiced hunting for mock Scuds, demonstrating their ability to potentially help the U.S. military avoid the debacle it had experienced in Iraq four years earlier. With the Predators working together with other aerial intelligence assets, including U-2 spy planes, friendly forces were able to destroy 85 percent of the simulated ballistic launchers during the exercise.

In June 1995, foreshadowing things to come, Military Intelligence Battalion (Low Intensity) demoed the Predator to the secretive Joint Special Operations Command and other special operations forces. There is little information available about what those flights involvement, but they almost certainly would have shown the drone’s value as a tool to help hunt terrorists.

Lastly in 1995, the Predators flew together with one of the U.S. Customs Service P-3 Orions on more mock border patrol and counter-narcotics operations and then took part in an unspecified Navy Carrier Strike Group’s Composite Training Unit Exercise. The Navy elements in the program likely coordinated that latter demonstration, which foreshadowed the service’s still ongoing on-again-off-again relationship with unmanned carrier aviation.

But most importantly, civil conflict was raging in the Balkans and the Predators presented an ideal way to monitor the situation in support of internationally-backed observer and peacekeeping missions. In 1993, the Pentagon has initiated a crash program to purchase a pair of the older Gnat-750s for this mission, but the process dragged out and the U.S. military eventually turned those drones over to the Central Intelligence Agency.

CIA did deploy them for missions over Bosnia and Herzegovina from to a base in neighboring Albania in February 1994, but had difficulty with their line-of-sight control systems. Attempts to use an old RG-8A powered glider as a radio relay only made the situation more complicated and at least one of the Gnat-750s crashed during the operation.

So, from July and October 1995, the Military Intelligence Battalion (Low Intensity) sent a joint service team to fly the Predators over the region instead in support Operation Deliberate Force. This mission involved a broader aerial campaign against Bosnian Serb forces, which had attacked U.N.-designated safe areas and committed major atrocities, including the infamous massacres of thousands of ethnic Bosniak men and boys in Srebrenica and Markale.

The video below is from a press conference during Operation Deliberate Force that includes strike footage.

In November 1995, the warring parties began negotiating what became known as the Dayton Accords, a U.S.-backed agreement that formally ended the civil war in Bosnia and Herzegovina. A NATO-led force subsequently deployed to the country to help enforce the settlement.

In March 1996, the drones from Military Intelligence Battalion (Low Intensity), along with another Army-led group, which also contained Air Force, Navy, and Marine Corps personnel, returned to the region to support that peacekeeping effort as part of Operation Joint Endeavor. Separately, elements of the unit took other Predators to explore the possibility of a submerged submarine controlling or otherwise communicating with the drone, another demonstration that we unfortunately know little about but that the Navy members of the program almost certainly organized.

However, by that time and after some amount of bureaucratic wrangling, the Pentagon had already decided to shift final control of the Predators to the Air Force once the ACTD program ended. The formal handover came in September 1996, when the Air Force’s 11th Reconnaissance Squadron took over the drones and the mission in the Balkans entirely. Under that service’s new leadership, the aircraft would evolve from just a surveillance platform into the multi-purpose MQ-1 armed reconnaissance asset.

Also known as the RQ-1L, these aircraft are a sort of hybrid between the Gnat and the Predator, using the former’s line-of-sight control system and other central components, but tucked inside a Predator fuselage with a more powerful Rotax 912 or turbocharged 914 engine at the rear. The finicky radio links again proved to be unreliable and in March 2005 one of the drones lost contact with the ground control station while flying at between 6,000 and 7,000 feet, spun out of control, and smashed into the ground in a ball of fire, according to an accident report we at The War Zone obtained via the Freedom of Information Act.

So, in 2005, the Army hired General Atomics to build the service a more capable design. Two years later it also created a new unit very similar to the old Military Intelligence Battalion (Low Intensity) specifically to conduct persistent aerial surveillance operations in Iraq to help both spot insurgents planting deadly roadside bombs and monitor their movements, developing so-called "patterns of life" in order to trace them back to their workshops.

That organization was known formally as the U.S. Army Composite Aerial Operations Activity and more commonly referred to as Task Force Observe, Detect, Identify, and Neutralize (TF ODIN). As with its predecessor, it operated a mix of modified Beechcraft King Airs and unmanned aircraft, including the RQ-7 Shadow and pre-production versions of the new pilotless plane from General Atomics, called the Warrior Alpha. The Army eventually stood up a second, similar unit in Afghanistan in 2008.

In 2009, more than a decade after losing control of the Predators to the Air Force, the Army began fielding its own replacements in earnest. The final production aircraft, the MQ-1C Gray Eagle, is similar visually to the Predator, but is actually something of another hybrid design that shares more with the larger MQ-9 Reaper, including a strengthened main wing with the ability to carrying AGM-114 Hellfire missiles and other stores on four pylons.

Since then, it has been steadily adding Gray Eagle drones into all of its combat aviation brigades to provide the required persistent battlefield surveillance capability it first identified more than 20 years before, but now with the added ability to strike at the targets it finds directly.

And in something of another twist of fate, there is a distinct possibility that the Predator may actually continue to serve the U.S. military, but with the other two services that had originally took part in the program, the Navy and Marine Corps. When all is said and done, the MQ-1 may actually turn out to be the joint service aircraft that the Pentagon had originally envisioned, a process that began in large part thanks to the Army.