As we suspected, it was designed years ago for a more ambitious program and has since been adapted to meet the Navy's carrier-based tanker needs. 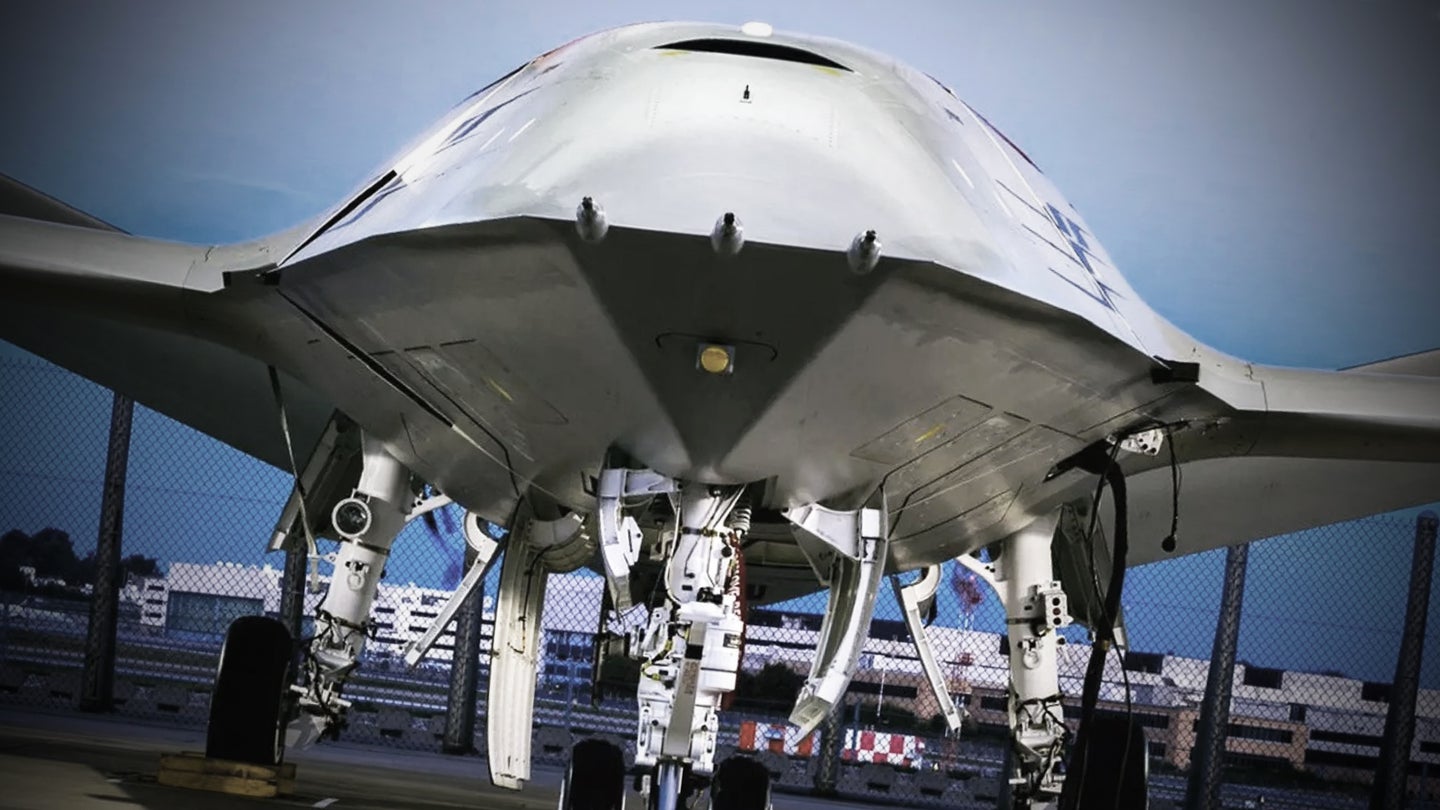 We are finally getting our first detailed glimpse of Boeing's MQ-25 "Stingray" drone in its entirety, including a view of its very slender wings. At the same time new information on the aircraft's past has to light, as well as a clearer idea of what Boeing has in store for its bobsled-shaped unmanned tanker.

Our good friend James Drew over at Aviation Week posted a story that included new details and new pictures of Boeing's MQ-25 entrant. According to Drew, Boeing's Phantom Works had painted a large piece of tarmac at Lambert Field in St. Louis in the outline of an aircraft carrier's deck, and have been executing mock shipboard suitability and deck handling tests, both during day and night.

During one of these tests is probably when this picture was taken of the drone which The War Zone initially published on January 9th, 2018. The ground tests included locking the aircraft into a mock catapult and parking it in some of the tightest dimensional spaces on the flight deck. Drew also notes that the concept by which Boeing testers are controlling the drone during taxi operations remains unknown. Northrop Grumman previously used a glove-like apparatus to direct their now defunct X-47B demonstrator around the carrier deck, but such a contraption doesn't seem to be in use when it comes to Boeing's carrier-based drone prototype.

And as we have long suspected, Boeing's MQ-25 design originally began development back in 2012 for the Unmanned Carrier-Launched Airborne Surveillance and Strike (UCLASS) program that was later withered down into a tanker drone with some ancillary surveillance potential. In fact, the airframe itself was secretly finished in 2014, before being put into storage until it was revived for the Carrier-Based Aerial Refueling System (CBARS)/MQ-25 tender. So in essence, the design is not 'clean-sheet' for the tanking mission, although Boeing says they had that also in mind when designing it, and it isn't clear what was modified on the aircraft to meet the CBARS/MQ-25 requirements—but more on that in a moment.

Drew does mention that the aircraft's small air inlet on its nose is used for environmental cooling, as we suspected. Also the camera system seen on the drone is just for testing purposes, an electro-optical sensor turret will eventually be fitted should the company win the contract to build four prototypes. He also notes that Boeing is not pitching their entrant as low-observable, but clearly it has many low observable features—which are a byproduct of its UCLASS roots—but the long, slender, glider-like wings that we are just now getting a full view of in detail are not stealthy at all.

Boeing says that their aircraft will be able to meet the CBARS requirements with substantial margin built in. That is a high order as the Navy's future MQ-25 has to unload seven tons of gas to other aircraft after flying 500 miles from the carrier and then have enough fuel to return to the boat.

The ability to accomplish such a feat relies a lot on the aircraft's wing design, which looks particularly well suited for loitering and endurance at altitude as opposed to speed and agility. One has to wonder what wings Boeing's MQ-25 wore before it was repurposed as a tanker drone, and with that in mind, it's pretty easy to imagine Boeing's design being reconfigured as a somewhat stealthy platform used exclusively for surveillance and light strike missions. An internal weapons bay seems plausible (and we may have already spotted it) considering the fuselage design, and it may even be there already considering the aircraft was originally designed for such a mission set.

In light of what we know now about Boeing's MQ-25 wing design, the question of where the government furnished Cobham aerial refueling pod will be mounted is a relevant one. It seems that the aircraft's centerline will be the most logical location. It's not clear if the wings will feature any sort of plumbed hardpoints that could accommodate the pod or external fuel tanks, but considering its thin chord, it seems doubtful. And those wings don't look like they can hold much gas either, making one wonder if 14,000 pounds of gas can fit inside its fuselage alone. That's just over an F-15C's full internal fuel load, and that doesn't count the gas the MQ-25 needs to make it 500 miles to its tanking position and back to the boat.

We also still don't know who is part of Boeing's team for their MQ-25 entrant. The engine manufacturer and type are particularly of interest considering the design's exotic flush-fitted air inlet configuration—one that is historically problematic when it comes to airflow, especially at higher angles of attack, like when landing aboard an aircraft carrier.

As we reported on in-depth recently, Boeing claims this is a 'must-win' contract and has even gone as far as teaming up as a subcontractor with General Atomics on their own MQ-25 entrant. Of course that relationship would only go into effect if General Atomics wins the competition. But considering it's really just the MQ-25 and the USAF's T-X jet trainer as far as major aircraft programs up for grabs in the near future, Boeing's historic St. Louis plant needs one of them to carry the facility through as the Super Hornet's production run dims.

Even if Boeing wins the day, it will be for just four airframes that aren't scheduled to arrive until roughly 2024. The Navy says it will begin buying MQ-25s in bulk two years later if it likes what it sees, with up to 76 airframes being delivered in total. So it's not a huge program even if it makes it to initial operating capability.

Some think, including one NAVAIR insider The War Zone recently talked to, that the service, which has a major cultural aversion to unmanned carrier aviation, will "strangle the MQ-25 in the crib" long before it gets to that point. And considering how the program has devolved over the years that isn't an unwarranted assumption.

But regardless of cultural headwinds or naysayers, the future of tactical combat aviation is unmanned, and the unmanned combat air vehicle (UCAV) realm is especially attractive when it comes to carrier operations. With this in mind, if Boeing can get a foothold in this space with the Navy, it could mean the company would have a huge advantage when it comes to fielding more advanced and plentiful unmanned carrier-borne aircraft systems down the line. And some of those systems could just end up being Boeing's current MQ-25 design reverted to its earlier stealthier configuration.

As they say in the corporate world, "product synergy" is a good thing.