During a routine NATO exercise, but amid Russian threats, the two groups trained to harass enemy troops and shoot down low-flying aircraft. 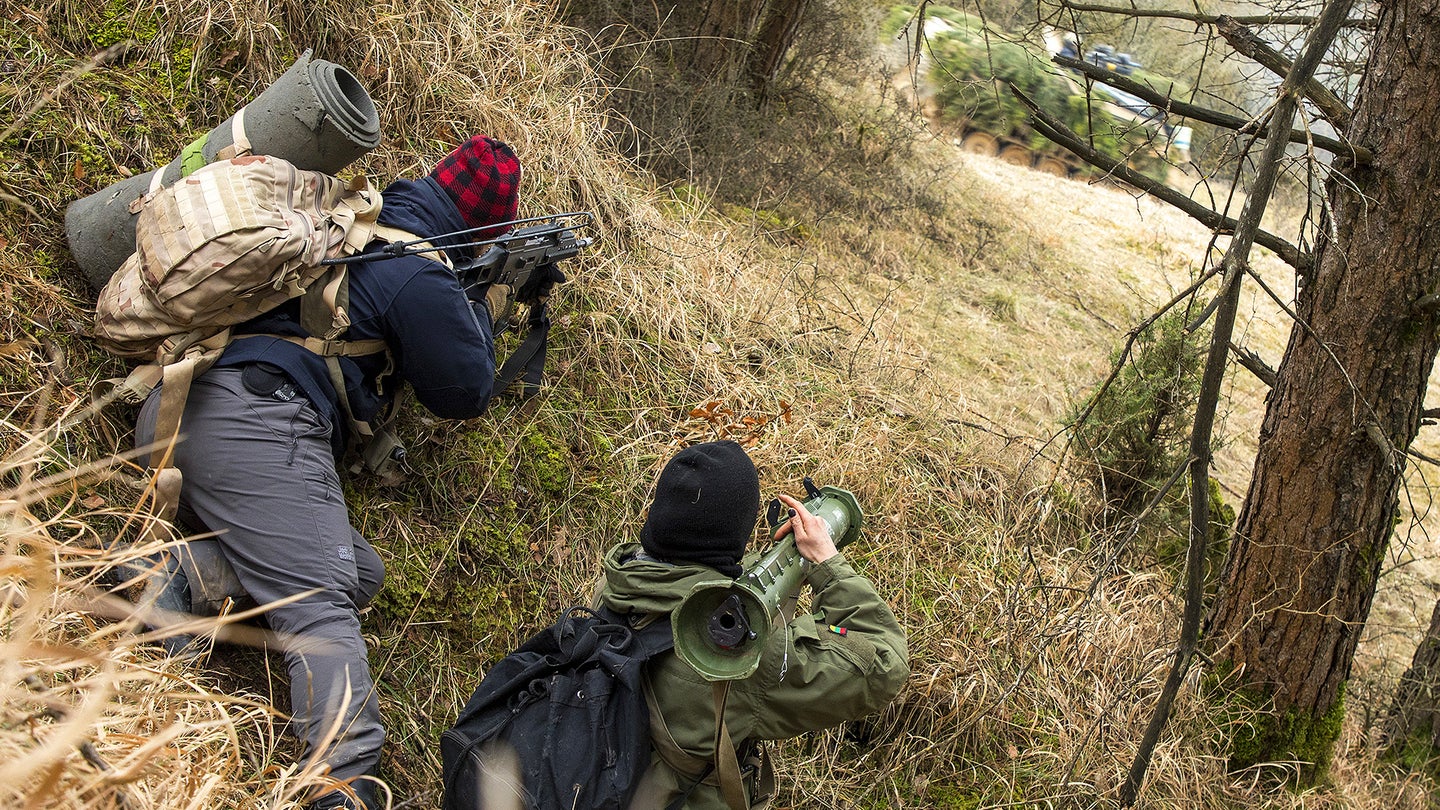 After years of fighting limited conflicts, the U.S. military is reorienting itself to be better prepared for a potential traditional high-end conflict against a nation state adversary with renewed investments in heavy equipment, including armored vehicles and artillery. At the same time, a recent training exercise highlights the fact that any such future fight in Europe, where the most likely opponent would be an increasingly aggressive Russia, will still require a broad mix of capabilities, including special operations forces working together with local forces to harass enemy troops and prevent hostile commandos from infiltrating into friendly areas.

Earlier in March 2018, Special Operations Command, Europe (SOCEUR), which oversees American special operations forces activities in and around the continent, posted a series of images from an exercise in Germany nicknamed Allied Spirit VIII. They show Special Forces soldiers from the U.S. Army National Guard’s 19th Special Forces Group (Airborne) working together with members of the Lithuanian National Defense Volunteer Forces, also known as the Krašto Apsaugos Savanorių Pajėgos or KASP. The tactics on display reflect a guerrilla warfare playbook straight out of a Cold War movie such as Red Dawn.

Armed with rifles and light machine guns, as well as training versions of the AT4 recoilless rifle, a single-shot disposable derivative of the famous 84mm Carl Gustaf, and the FIM-92 Stinger man-portable surface-to-air missile system, or MANPADS, the groups ambushed mock enemy convoys and low-flying aircraft during the exercise. Using a combination of Humvees and civilian vehicles, the teams also appears to have conducted scout and reconnaissance type missions to monitor the movements of the simulated opposing force. It’s not entirely clear, but some of the KASP personnel may have taken on the role of the aggressors, as well.

None of this is necessarily out of the ordinary. Among U.S. special operations forces’ main missions are training and advising friendly security forces, known formally as Foreign Internal Defense, and fighting behind enemy lines with local forces against hostile governments or occupying forces, operations the Pentagon collectively refers to as Unconventional Warfare.

But it is notable that these personnel took part in an otherwise conventional exercise such as Allied Spirit VIII, which had the primary objective of giving NATO allies an opportunity to practice working together on a large scale, with an eye toward defending the alliance’s eastern flanks, especially those along the Russian border.

Between Jan. 15 and Feb. 5, 2018, approximately 4,100 troops from the United States, Albania, Canada, Czech Republic, Denmark, Italy, Lithuania, Poland, Romania, and the United Kingdom ran through a number of different scenarios at the U.S.-run Joint Multinational Readiness Center in the German municipality of Hohenfels.

It was also the first time the leadership of NATO’s still young Multinational Division North-East (MND-NE) has had a chance to practice running a large scale operation. This headquarters oversees rotating alliance forces operating in the Baltic States of Estonia, Latvia and Lithuania, as well as Poland.

“We need to train,” Czech Republic Army Brigadier General Karel Rehka, the commander of the exercise, told U.S. Army reporters, “if we're going to fight, most likely we'll fight as an alliance, so training with multiple nations is ideal to prepare for that.”

Adding in the American special operators and KASP is a tacit admission of the important part special operations forces and reserve territorial defense units might play in any future European conflict. The Baltic States especially have concerns about the potential for a Russian push into their territory and the ability of the alliance to respond fast enough to blunt such an offensive.

In February 2016, the RAND Corporation, a private think tank with strong ties to the U.S. government, dropped a bombshell report that concluded Russian troops, backed by heavy armor and artillery, could seize the capitals of Estonia and Latvia, both of which sit less than 150 miles from the border with Russia, within three days. In the same simulation, NATO allies further south had trouble mobilizing and getting into position quickly.

These types of assessments led in no small part to the creation of MND-NE as part of what the North Atlantic alliance calls its “Enhanced Forward Presence.” It’s also prompted additional special operations forces activity, including other unconventional warfare exercises and the establishment of pre-positioned facilities and other resources to support these operations in an actual conflict.

The Pentagon’s latest budget request for the 2019 fiscal year includes more than $59 million for stockpiles of equipment in Europe to support rapid deployments of special operators and more than $36 million to improve base areas to support the movement of those personnel and supplies, as well as nearly $56 million to step up cooperation with friendly special operations forces in central and eastern Europe.

In a real crisis, given the relatively constrained environment of the Baltic States, NATO special operations forces and local troops in that region could easily find themselves forced into conducting a limited guerrilla war against more heavily armed invaders. Roving teams of American special operators and members of groups like the KASP could be essential in delaying an enemy force long enough to give other alliance members the time they need to mount an effective counter-attack.

With weapons such as the AT4 and the FIM-92, they could already be a highly mobile and credible threat to a conventional enemy, able to extract a painful price from heavily armed opponents. These groups could easily use light vehicles, including civilian types, to add additional firepower in the form of guided anti-tank missiles and heavy machine guns, as well as using hand-held laser designators and advanced communications gear to call in precision air and artillery strikes.

In recent years, these potential capabilities of light forces outfitted with these types of weapons have been on full display in various hotspots around the world, from Ukraine to Syria. Russian-backed Ukrainian separatists used MANPADS to great effect against government aircraft and Syrian rebels shot down a Russian Su-25 Frogfoot ground attack jet earlier in 2018. In Iraq, Syria, and Yemen, rebels and terrorists alike have become increasingly proficient in using guided anti-tank missiles to blow up not only armored vehicles, but fortified positions, exposed troops, and other ground targets, including landed helicopters.

And though the prospect of an actual conflict between NATO and official Russian troops may seem remains relatively remote, there is still a very real potential for some form of active fighting, especially one involving the Kremlin’s proxies. In 2014, Russia employed unmarked troops to seize control of Ukraine’s Crimea region and subsequently began actively supporting a separatist insurgency in that country’s eastern regions in the name of defending ethnic Russians.

The Baltic States, which were part of the Soviet Union until 1990-1991, all have large Russian populations. Estonia in particular has already seen a number of very real and worrying incidents, including what experts believe was a Kremlin-sponsored cyber attack on the country’s government and major private business in 2007 and the abduction of an Estonia intelligence officer in 2014. More recently, American troops in the region and elsewhere have also fallen victim to what appear to be Russian cyber attacks, targeting individuals and their families personally, and information warfare campaigns spreading misinformation and disinformation about their activities.

On top of that, KASP actually already has a history of resisting Russian control. After Lithuania declared independence from the Soviet Union in 1990, what was then known as the National Defense Volunteer Service helped block an attempt by authorities in Moscow to reassert control in the capital Vilnius and prevented military reinforcements from Russia from crossing the border.

The organization is clearly ready to fight to block any future Russian or other foreign intervention again, but now with the help of American special operators and other NATO forces.