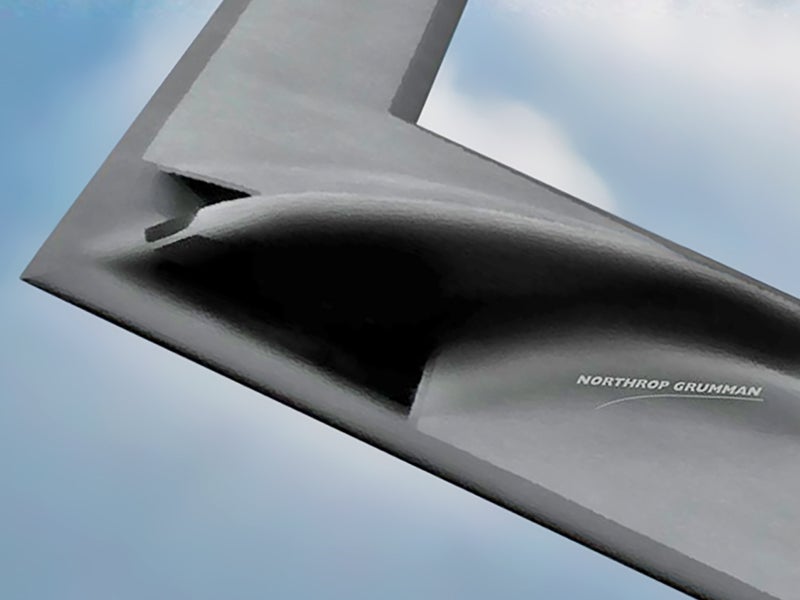 Representative Rob Wittman (R-Va), a powerful member of the House Armed Services Committee, talked in an unprecedentedly open nature about the shadowy B-21 Raider program during a defense conference in Washington, DC. In his remarks he described the program as largely on track, but did detail a couple notable issues, one in particular having to do with the aircraft's stealthy air inlet system and engine and exhaust configuration. He also noted that an "Iron Bird," basically a non-flying, full-scale, systems configuration model of the aircraft, was being made to ease component integration issues.

Defense News's Aaron Mehta and Valerie Insinna published the initial report about Wittman's remarks in which he described a few of the 'hiccups' associated with the bomber's accelerated development, almost all of which remains deeply classified. The development cost alone for the aircraft is slated to run over $20B, with the program cost to build at least 100 of the bombers projected to cost upwards of $100B.

As for the aircraft's 'hiccups,' Wittman noted to reporters:

“This is an extraordinary, complex aircraft... The issue is not that you have these uncertainties. The issue is how you address them.”

But powerplant integration and airflow issues seem to be particularly vexing for the program judging by the Congressman's remarks:

“This is a very, very different design as far as airflow, and there have been some design challenges there... Pratt and Whitney says one thing; if the exhaust, the ducting contractor says another thing and says, ‘There’s only so much air we can move through there,’ and Pratt & Whitney says, ‘No, we need a certain amount of air to go through the front of the engine,’ then the question is, how do you do that?... Do you split [the requirements] between the two? Does Pratt & Whitney say, ‘Well, we can change some of the cowling on the surface face there to be able to do that'... It’s not just the engine, but it’s the ducting on the engine, too. I think all those things are elements that you would normally expect in an aircraft that’s new, that takes a concept from B-2, refines and uses it on this platform.”

Wittman was also fully aware that messing with the B-21's inlet design could have a major impact on its low-observability, and he is very much right for elevating those concerns. The inlet design of a low observable aircraft is among its most finely tuned and critical features. A jet aircraft's radar cross section is largely impacted by its ability to conceal the fan blades of its jet engines from radar waves. At the same time 'burying' jet engines deep behind a complex duct system is not conducive to allowing for the consistent and massive volume of airflow needed to produce high and reliable thrust.

Even the use of serpentine ducts that conceal a jet engine's fan face from line-of-sight are also usually accompanied by other hidden low observable features. These can include baffles mounted directly in front of the engine's face, radar disruptive structures installed under the intake's skin, and radar absorbent coatings surrounding and lining the intake itself.

Issues with stealthy aircraft designs and airflow to their jet engines are nothing new. In fact it dates back to the dawn of stealth, and Northrop's own progenitor to the B-2—Tacit Blue (aka The Whale)—had major issues even starting due to its dorsal shared inlet design and twin engine configuration.

The B-21's design is supposedly optimized for broadband stealth from virtually all directions—more so than its B-2 forebear that gave up some low-observability, as well as altitude performance, for a capability it has never used. Fielding the most low-observable engine configuration, to include a stealth optimized inlet and exhaust, is surely a key element of the program, but we know very little about any of it.

We have had good indications for some time that B-21 will likely utilize two engines instead of the B-2's four. A non-afterburning and tweaked variant of Pratt and Whitney's F135 turbofan found on the F-35 fighter is rumored to be the powerplant of choice. That engine, without major tweaks that will surely be made for use on the B-21, puts out 28,000lbs of 'dry' thrust (without afterburner). With modifications, this number would likely climb into the 30,000lb+ thrust category.

In comparison, the B-2A has four General Electric F118 engines that put out 17,300lbs of thrust each. The B-21 will almost certainly be a smaller design, with a payload of about two thirds to half that of the B-2. Thus the twin-engine design with a pair of roughly 30,000lb thrust class powerplants makes some sense.

But regardless of who makes the engines for the B-21, or even if it has two engines instead of four, without a good inlet design that can deliver optimum airflow to the air thirsty engines during various phases of flight, their thrust ratings as advertised will plummet significantly. This can impact range, ceiling, and especially takeoff performance.

From the only concept art we have showing the B-21 the inlet design, it looks to be more seamlessly streamlined and integrated in the aircraft's upper fuselage, as opposed to the B-2's design which uses s-like ducts housed in protruding dome-like inlets to feed air to its engines. If the B-21's inlet is as flush as it looks in the concept art, managing boundary layer airflow will also be an issue and could impact airflow as well.

Clearly de-conflicting inlet configuration and airflow management for such an exotic design would be challenging, but we will have to wait to see just how much of a preference ends up being put on this feature, especially if an extremely low-observable inlet design starts eating into hard performance requirements severely, one of which is very likely a high operating altitude of around 60,000 feet or more.

The B-21's exhaust is a total mystery. We have no idea what it will look like, but it's totally possible that the twin planar type exhausts found on the B-2 will be a thing of the past. Ducting the exhaust out of a larger portion of the bomber's upper trailing edge is a possibility, not just to drastically reduce the aircraft's infrared signature but to also provide better stability during engine-out conditions. Going from four engines to two would complicate scenarios where an engine has to be shut down in flight, especially for a flying wing design with very limited longitudinal stability as it is. It is also possible that the exhausts from both engines will be ducted towards the centerline of the B-21's "V" shaped tail, mitigating engine-out controllability issue to a large degree.

The main point here is that powerplant integration on a very low-observable and exotic aircraft is a very big issue, but at the same time it is hardly unforeseeable that problems would arise in this department considering what we know about the program's ambitions.

Wittman also mentioned that the aircraft's wing design is something of an roadblock, but we don't really have any details as to why. We have posited that one "bleeding edge" stealth technology that could potentially be incorporated into the B-21's design is so called "morphing wing" technology. If this concept is being used to any degree it would drastically complicate the wing design and fabrication process, but the low-observable payoff could be significant. Wittman also mentioned that Northrop Grumman is having issues stacking enough engineers onto the program to keep up with its ambitious timeline, which really isn't a surprise.

Beyond propulsion, bringing in all the subcontractors together to participate efficiently in building out the bomber is also a challenge. The Congressman noted that Northrop Grumman is working on that aforementioned "Iron Bird" full-scale mock up to better stave off major systems integration issues.

This is clearly more information on the B-21's development than we have ever gotten before, and the fact that it is coming from a Congressman and not the USAF or even Northrop Grumman seems very odd. Also the implied timeline conflicts somewhat with recent comments made by the 412th Test Wing commander, who noted just last week that testing will begin of the B-21 at Edwards AFB in the near future.

We don't know exactly what that means, but it seems that the program would need a flying example of the aircraft within the next 24 months or so to have any hope of staying on track developmentally speaking. Then again it's also very possible that the congressman could have been referring to issues in the past that he has been briefed on, we just don't know.

The USAF is counting on the B-21 reaching initial operating capability by roughly 2025, at which time it will begin replacing B-2s and B-1Bs that together currently makeup the majority of the USAF's bomber fleet.