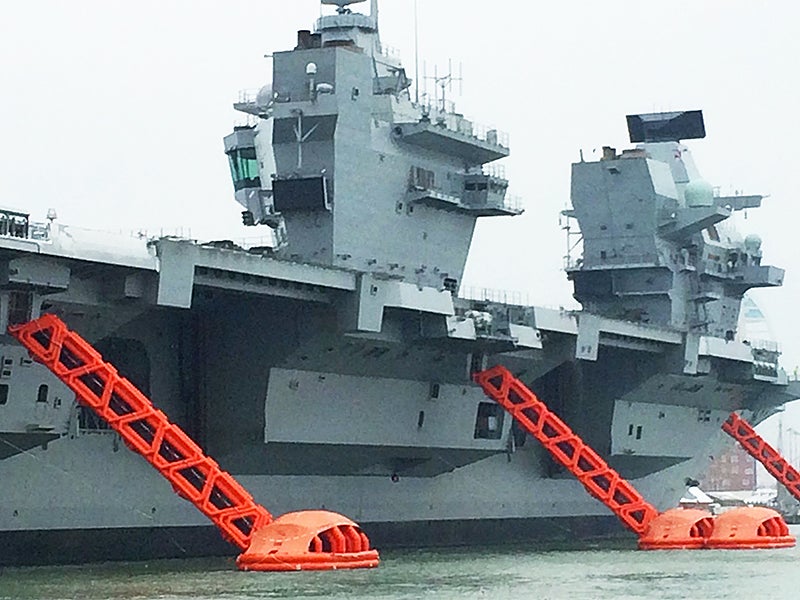 To say that there is a lot of hype surrounding the Royal Navy's new carriers would be a vast understatement. But who can blame the Brits who have longed for a proper flattop since HMS Ark Royal was retired the better part of a decade ago. The Royal Navy knows their new carriers garner major interest so they been on a major social media offensive to let people see seemingly every step HMS Queen Elizabeth makes as it inches its way ever closer to initial operating capability. This week that process included testing the carrier's Marine Evacuation System (MES) as part of a broader Safety Of Lives At Sea (SOLAS) trial.

First off, not many people even know that ships can have evacuation slides like airliners, but these days many do! In this case, the system's mission would be to get up to 1,600 souls that may inhabit the HMS Queen Elizabeth at any given time off the vessel as soon as possible without resorting to sailors and passengers jumping from up to 88 of feet in the air into the unforgiving water below—a drop that can cause serious injury or even death. In order to accomplish this task the Royal Navy ended up with the mother of evacuation slides, and at the bottom there is a landing area where people would be boarded onto life rafts during an 'abandon ship' or other major emergency scenario.

HMS Queen Elizabeth's system looks nearly identical to the one below, but Marine Evacuation Systems come in many shapes and sizes. This includes ones that have huge, enclosed, bouncy-house like life rafts at their ends and spiraling chutes that drop escapees near-vertically into the contraption. This helps solve the complex task of keeping the slides and landing areas clear, and the need to tightly coordinate the pacing rate that evacuees egress down the slide and board into separate life rafts.

HMS Queen Elizabeth's evacuation system appears to be manufactured by Liferaft Systems Australia which has a large defense arm. Apparently the design was conceived in 1992 and has been constantly evolving ever since. For high-end military users, the system's housing is even designed for reduced radar signature.

According to the company's website, 600 people can be evacuated per half hour per system. So in HMS Queen Elizabeth case, it would theoretically take less than 30 minutes to evacuate her maximum complement using the three slides on her starboard side. She has another three slides on her port side as well. The landing area also acts as a large life raft that is fully equipped with supplies.

Liferaft Systems Australia also notes that the system can be used as waterline platform for humanitarian and other missions, stating:

"More frequently naval ships are being used for humanitarian and peacekeeping efforts and exercises to assist ships affected by piracy. The ability to recover persons from the water rapidly is crucial... Medical personnel can go down the slide and immediately assess recovered casualties on the safe stable platform provided by the attached 50 or 100 person liferaft... Uniquely it is also possible to rescue stricken personnel from the water using LSA MES... Personnel can be recovered up the inclined slide using a simple ladder or mechanical winch."

So there you have it, the HMS Queen Elizabeth's e-ticket ride of an emergency escape system. Hopefully her crew will never have to use it, but it sure is good to know that it's there just in case.