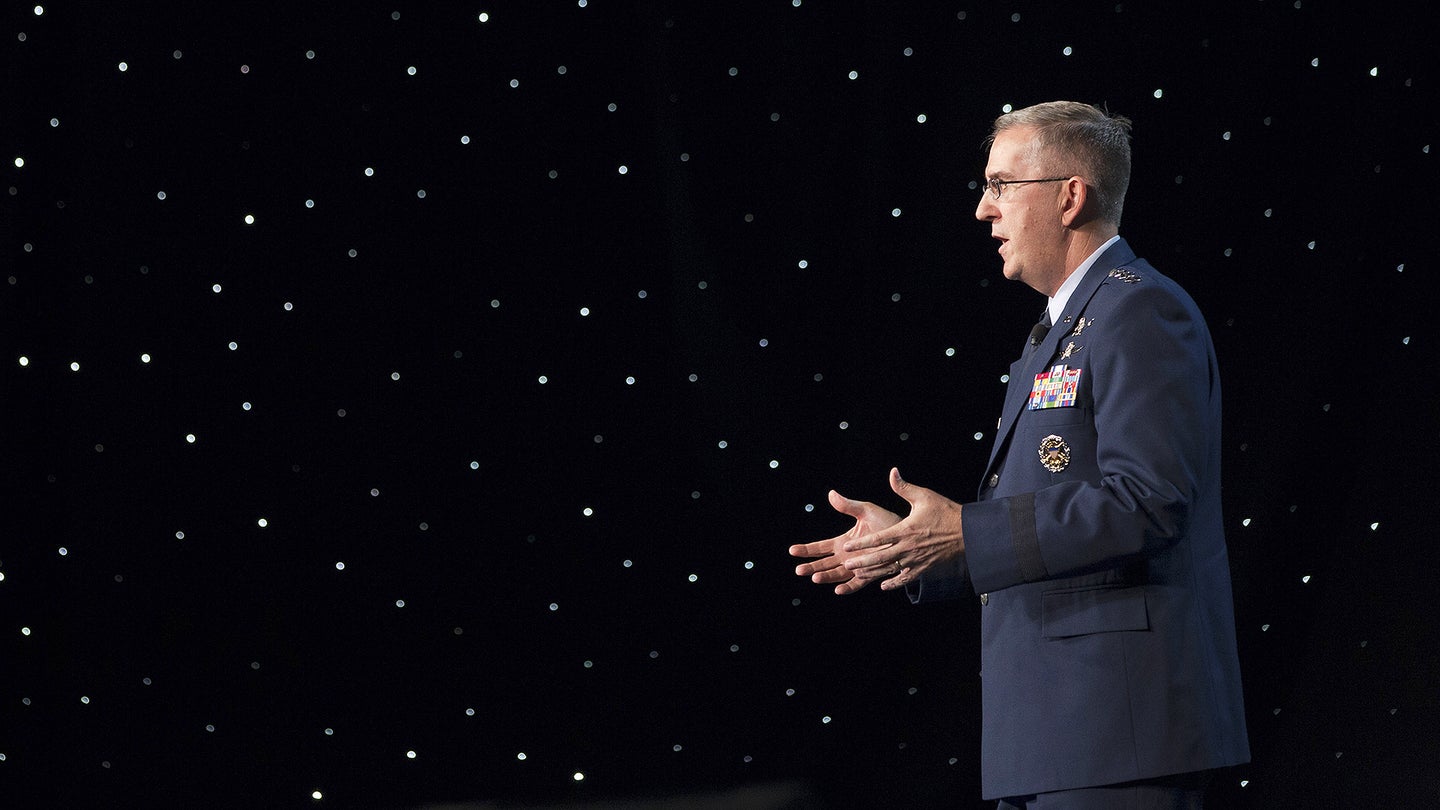 There has been a ton of hype over hypersonic weapons as of late, and ballistic missile defense has also become a far more popular topic as a result of North Korea's missile programs. The ballistic missile defense system the U.S. already has in place is a rickety and unreliable one, made up of a hodgepodge of various sensors, data-links, and interceptors scattered around the globe. When it comes to hypersonics, the Pentagon is just coming to terms with the emerging threat posed by these super-fast flying weapons and is trying to figure out ways to detect and destroy them before they can land a deadly blow. But General John Hyten, the head honcho over at U.S. Strategic Command and the man who says the military's inability to "go fast" keeps him up at night, has laid out his plans for confronting both threats in a far more robust manner, and possibly others in the process as well.

In the video below shot by C4ISRnet.com at the Army Association's Symposium on missile defense, Hyten outlines how improved sensors are becoming his main focus on tackling both threats. This underscores something The War Zone has been saying for some time, that it's simply not feasible to provide enough persistent terrestrial radar coverage to support a robust ballistic missile "shield" yet along one optimized for also countering hypersonic vehicles. As such, Hyten wants to go to space to accomplish the critical mid-course discrimination element of the missile defense mission, and in doing so, also provide surveillance and tracking of hypersonic threats. Supposedly the Missile Defense Agency has a plan to do just that, but it is taking far too long.

This system is called the Midcourse Tracking Sensor, which will be able to track the missile as it traverses through its midcourse stage of flight. This is often referred to as "cold body tracking" as there is no infrared plume or hot reentry vehicle to home in on quickly and decisively. This is also the regime of flight where decoys can be deployed and advanced countermeasures activated, which throw off radars and other terrestrial tracking sensors. Getting an interceptor in the vicinity of a missile during its midcourse stage of flight is hard enough, but making sure it actually takes out the warhead and not a decoy is a whole other problem that this system could help solve.

But being able to detect and track ballistic missiles as they cruise towards their targets above the atmosphere is just one of this system's possible uses. It could also be able to look down on earth and track hypersonic vehicles ripping through the atmosphere at thousands of miles an hour, and provide early warning and even critical telemetry to interceptors that could streak up and knock down these emerging threats.

As Hyten notes, this system could change the game so to speak for adversaries who are developing high-end weapons to take advantage of the fact that America's early warning and anti-missile capabilities are built around countering traditional ballistic missile flight profiles and concepts of operation.

It's very possible that such a system, with sensitive look-down radar capabilities as well as infrared tracking systems, could even be able to detect aircraft as well. America's most high-tech space-based early warning systems, known as Space-Based Infrared System (SBIRS), detects the plumes of missiles during their boost stage, and may even have limited cold body tracking capabilities.

SBIRS has also been rumored that SBRIS may have a secondary capability that can detect other forms of infrared events, like artillery fire, and even the launches of surface-to-air and air-to-air missiles. Some have even posited that aircraft may be traceable by the system as well under some circumstances.

Regardless of existing capabilities, the Midcourse Tracking Sensor, and other space-based sensors like it, will be critical to creating the ability to counter-hypersonic weapons as the technology continues to mature into an operational state.

According to Hyten, the technology is ready and somewhat affordable, and in comparison to what has been spent on ground-based radars, not to mention an armada of sea-going radars that support MDA missions, that still have exploitable weaknesses in coverage and capability, it really does make sense regardless of the sticker shock usually associated with space-based sensor constellations.

The general's remarks seem to be reflected, at least partially, in the 2019 budget, with the Missile Defense Agency making taking on hypersonic threats a new focus. From the budget summary:

Here are the line-item documents for hypersonic defense from the MDA's 2019 budget:

There is no mention of the Midcourse Tracking Sensor in these documents per se, but that doesn't mean it is not a program within the Missile Defense Agency's classified budget, or part of one of these existing developmental line item concepts. Even if it doesn't exist just yet, it seems like Hyten, other MDA stake holders, including members of congress and the White House, would support jump starting the program.

The idea sounds like a good one that may even be essential even to hypersonic missile early warning in the future, yet alone ballistic missile defense, but putting such critical assets into orbit also is a reminder of how vulnerable America's space-based platforms are at present. This is beginning to change though, with the USAF putting a whole new emphasis on creating far more resilient space-based capabilities. But still, with major peer state competitors hurtling themselves at anti-satellite weaponry that can jam, disable, blind, or destroy enemy orbital spacecraft, making sure such a sensor is survivable, or at least rapidly replaceable, would also be key.

With all this in mind, two things seem certain at this point, the 2020 budget will likely have far greater emphasis put on space-based capabilities, and the great hypersonics race, which will be rife with measure and countermeasure, has officially begun.