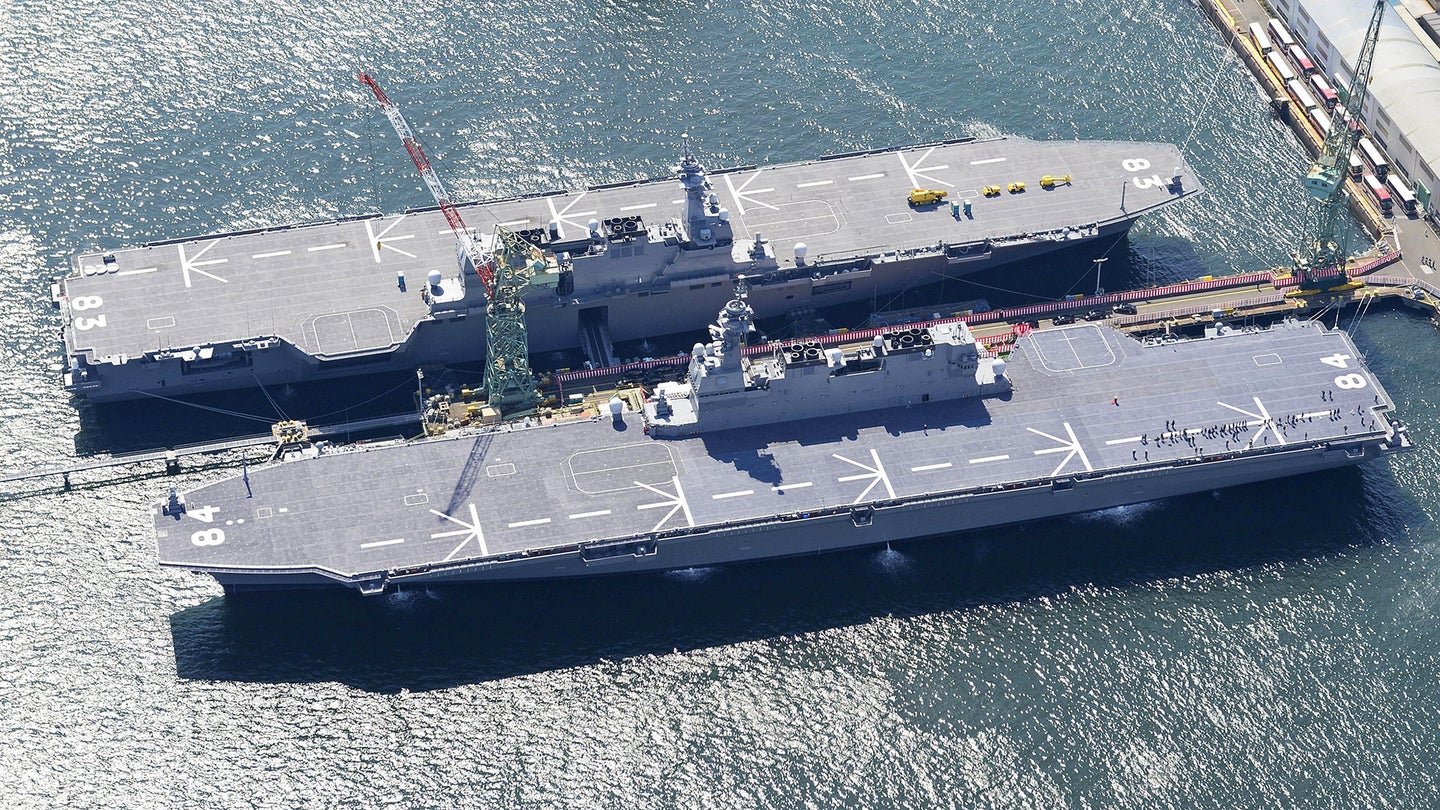 Japanese Ministry of Defense executives have outright admitted that despite the Japanese government's past denials that the Izumo class "helicopter destroyers" were not designed to accommodate fixed-wing short takeoff and vertical landing (STOVL) tactical jets, they actually were designed with exactly that in mind.

“It is only reasonable to design (the Izumo) with the prospect of possible changes of the circumstances in the decades ahead... We viewed that whether the Izumo should be actually refitted could be decided by the government.”

When the Izumo first entered service, the vessels' ominous profile and massive proportions led many, including the author, to allege that these vessels were intended to one day carry fixed-wing tactical jets. It also wasn't really clear why the country would need larger vessels than the Hyuga class helicopter destroyers already in production if they weren't going to gain more offensive capabilities. Although they have amphibious capabilities, Japan's helicopter carriers are traditionally more focused on anti-submarine warfare.

Asahi Shimbun's sources went on to say that a consensus was privately reached among the service's leadership that the Izumo class would be designed for conversion into a fixed-wing capable aircraft carrier in the future but the Japanese government would deny this due to the issues surrounding violating Article Nine of the Japanese constitution.

We recently reported that Japan's Self Defense Forces were looking at the idea of refitting its Izumo class carriers, of which there are two, to accommodate the F-35B, as well as larger plans to purchase more F-35s, including between 20 and 40 F-35B models. With this in mind, it seems pretty clear that this was the plan all along, or at least it was envisioned as a major possibility when the ships were being designed and constructed. But this new information also points to the possibility that making the Izumo class ships F-35B capable will be far less complicated and expensive than some may have thought.

China's naval expansion eastward in particular was a major concern among designers when the ship's plans were being formulated in the mid 2000s. One official told Asahi Shimbun:

“The plan to construct the Izumo was settled with its future conversion in mind to prepare for any possible contingency of the unavailability of the ASDF Naha Base."

Naha Base is co-located alongside Naha Airport on Okinawa, and is the only major air base controlled by Japan's Air Self Defense Forces in the area, although the American bases of Kadena and Marine Corps Air Station Futenma are also on the island. Still, the runways at all three bases will be top targets for Chinese ballistic and cruise missiles during a time of war.

Putting the F-35B on a carrier makes it even more survivable and flexible during a conflict with a major peer state foe. It also allows for air power to persist even after land-based aviation capabilities has been effectively taken out of the fight, even if just temporarily. The ships could also setup a presence near the disputed Senkaku Islands and other tense locales. Hard-hitting power projection farther from Japan's own territory is also a major possibility as well with an F-35B capable carrier.

The article goes on to outline that the class's hangar and elevators were built to dimensions that could accommodate the F-35B and the MV-22 Osprey—Japan already has MV-22s on order. Even the class's flight deck can supposedly withstand the heat and pressure generated by the F-35's scorching exhaust. The official also says the carriers' deck would likely be modified with a ski-jump if the F-35B were acquired.

The justification of Japan's military posture, and the weaponry that supports it, all comes down to how one interprets "self defense" as per the Japanese constitution, but really, things have been rapidly changing for Japan when it comes to morphing its military into a far-reaching force with substantial offensive punch.

Seeing as all the other power players in the region are acquiring ever more advanced flattops, Japans move to modify the Izumo class to accommodate the F-35B is likely a foregone eventuality at this point, although exactly when a refit would occur remains unknown. Some reports state that the F-35Bs could be ordered as soon as next year, with them becoming operational by 2024. Presumably at least one modified Izumo class carrier would be ready to accommodate them by that time as well.

Considering that Japan is looking to arm itself with long-range cruise missiles and more capable fighters in the near term, a fixed-wing capable Izumo and her sister ship Kaga won't be far behind, ushering in a new era of power projection for Japan the likes of which the world has not seen since the end of World War II.