The plane made it back to base, but the potentially deadly mishap is the latest spectacular failure for the Growler's environmental control system. 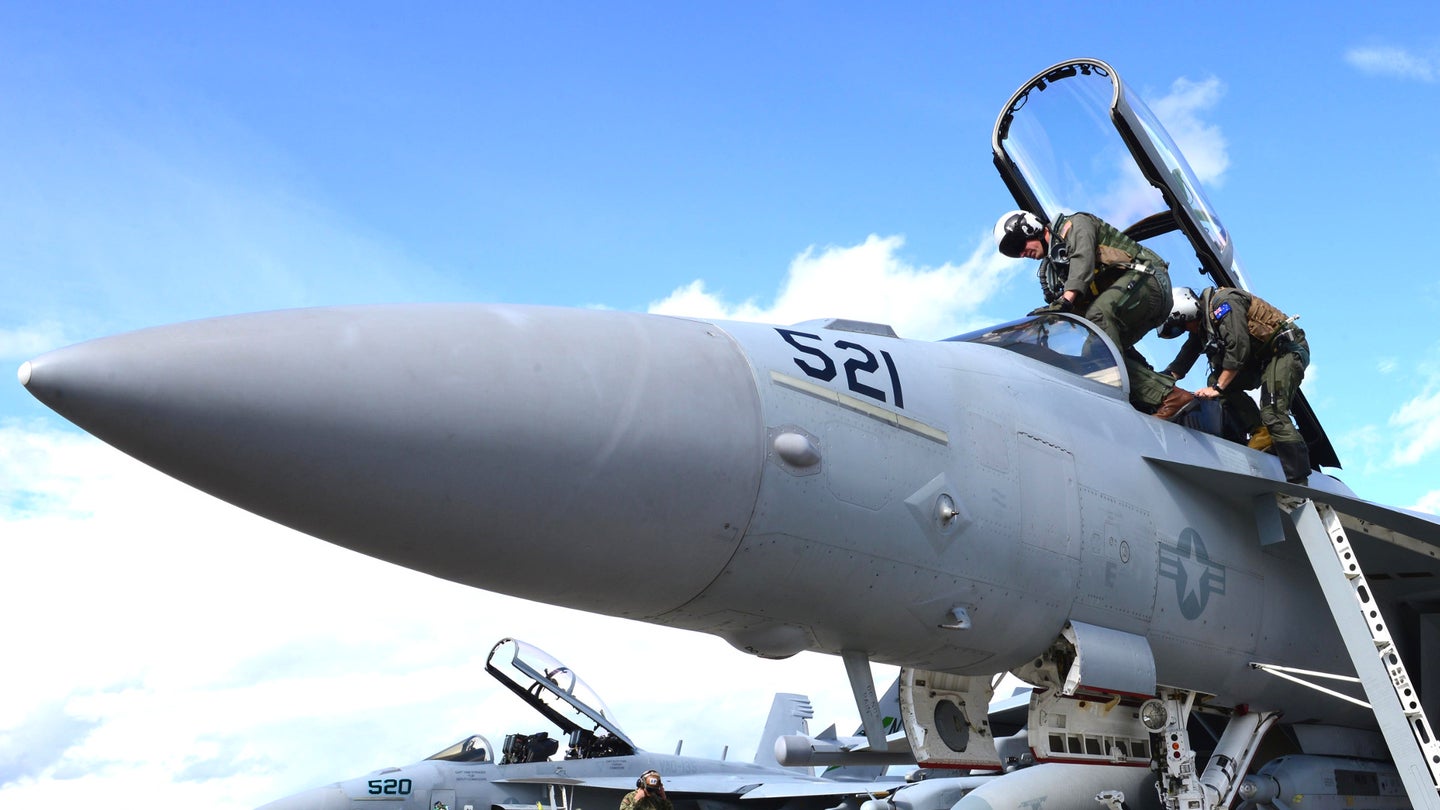 A U.S. Navy EA-18G Growler recently made it back to base after suffering a terrifying mid-air mishap, which left its two-person crew flying blind and frostbitten after the aircraft’s environment control system failed in part thanks to a pair of high-tech wrist watches.  The incident occurred just over a year after the canopy on another one of the electronic warfare planes exploded in a bizarre over-pressurization incident and as the service continues to struggle to find exactly what’s causing persistent reports of “hypoxia-like” symptoms across the F/A-18 Hornet, F/A-18E/F Super Hornet, and Growler fleets.

Defense News was first to report this new incident, which occurred approximately 60 miles south of Seattle, Washington. The EA-18G, assigned to Air Test and Evaluation Squadron Nine (VX-9), was flying at approximately 25,000 feet on a mission from Naval Air Station Whidbey Island, between Seattle and Vancouver BC, when the cockpit temperature plummeted to -30 degrees Fahrenheit.

The broken environmental control system (ECS) also let in a fine mist of liquid, which then froze, coating the inside of the canopy and vital flight instruments in an opaque sheen of ice. The ECS consists of a number of sub-components that are supposed to work together to manage oxygen flow to the crew, as well as cockpit pressure and temperature.

Despite using up all of their emergency oxygen supply, the crew was able to wend its way its way back to Naval Air Station Whidbey Island with help from air traffic controllers on the ground and their smart watches. In July 2017, Navy Hornet, Super Hornet, and Growler pilots each got a $450 Garmin Fenix 3 wristwatch, which can measure air pressure and altitude and display an individual’s course heading.

The service issued the watches in order to provide a backup alert mechanism in case the ECS' on-board oxygen generation system, or OBOGS, malfunctioned and cockpit pressure dropped to unsafe levels and the aircraft's built-in safety mechanisms and warning systems also failed. The Navy had not publicly stated that it could serve as a improvised navigational aid in an emergency.

The video below gives a basic overview of the Fenix 3's navigation functions.

They eventually got the aircraft back to base and safety on the ground. Both the pilot and the electronic warfare officer suffered severe frostbite, including blisters and burns on their hands, according to an official report Defense News obtained. It's not clear if there were any other injuries.

This is reportedly the first time this particular type of failure has ever occurred on one of the Navy’s EA-18G. It’s not the first time the ECS on a Growler has failed spectacularly, though.

In December 2016, the system in another Growler at Whidbey Island, assigned to Electronic Attack Squadron One Three Two (VAQ-132), also known as the “Scorpions,” malfunctioned. In this instance, the cockpit pressure spiked, leave one crew member with collapsed lungs and the other with a traumatic brain injury. The malfunction also blew out the plexiglass canopy and sent shards flying in all directions.

“The scene was unlike anything I’ve ever witnessed,” U.S. Navy Commander Jon Crawford, head of VAQ-132, told local reporters at the time. “Some of the stuff...yeah...a little horrific.”

Thankfully this all happened while the aircraft was on the ground. Both the pilot and electronic warfare officer survived the harrowing incident, thanks in part to the timely intervention of two U.S. Air Force Reserve pararescuemen from the 304th Rescue Squadron, who happened to be on base at the time.

Again, the Navy said this was the first instance of that particular type of failure on any of its EA-18Gs, but the service has had trouble nailing down exactly what went wrong. The combination of the cold Washington state weather and the ground crew having sprayed the aircraft down shortly before the mission might have contributed to the mishap. A faulty safety valve could have been another factor.

But the Navy’s Hornet, Super Hornet and Growler crews might not take much comfort in the possibility that these two particular accidents may have been unique and isolated. The Growler’s ECS, as well as related systems on the service’s Hornets and Super Hornets, have been a well known and persistent source of trouble.

The ECS, and more specifically the OBOGS portion, has been a contributing factor in approximately a quarter of all so-called “physiological episodes,” or PE, that Navy and Marine aviators have reported while flying Super Hornets and Growlers and that number is said to be higher in older Hornets, according to Defense News' report. PEs are generally instances where an individual suffers one or more serious physiological symptoms, such as severe headaches, blurred vision, confusion, or disorientation, or even temporarily blacks out.

Though it is often difficult for medical professionals to definitively diagnose the cause after the fact, these are all signs of hypoxia, a dangerous drop or complete lack of oxygen to the brain, which can be fatal on its own, as well as just especially dangerous for a pilot flying a high performance jet at hundreds of miles per hour.

The reason why the remaining pilots and electronic warfare officers have experienced hypoxia-like symptoms remains unexplained, which has become increasingly worrisome as reported instances have shot up in recent years. Between May 2010 and October 2015, there were 297 known PEs across crews flying Navy and Marine Corps Hornets and Super Hornets. In 2016 alone there were 125 incidents among individuals in Hornets, Super Hornets, and Growlers. Investigations have cited OBOGS failures as a major factor in crashes that have killed at least four naval aviators.

Similar OBOGS problems have cropped up in the service’s T-45 Goshawk trainer fleet, as well, with instructors staging a near mutinous protest over the issue in 2017. Hypoxia-like symptoms have also become a major problem for other aircraft across the U.S. military. Air Force pilots flying the F-35A Joint Strike Fighters, A-10 Warthog ground attack aircraft, and turboprop T-6 Texan II trainers have suffered all suffer PEs, as well. The T-6s remain grounded, though the service hopes to have them flying again, with some unspecified restrictions, by the end of February 2018.

So far, the Navy has still been unable to conclusively identify the root causes and has turned to a number of improvised measures, such as the Garmin watches. As of January 2018, the service had installed new oxygen monitors on 163 of the T-45s to alert crews to dangerous drops in the flow of air and record data about those malfunctions for further analysis.

But after the Navy announced in January 2018 that it would give Rear Admiral Sara Joyner a new job at the Pentagon after less than as head of its Physiological Episodes Action Team, some members of Congress raised more questions about how seriously the service might be taking the issue. Legislators lambasted Navy and Air Force officials over the issue at a hearing in February 2018.

"This has got to be fixed. I don’t have confidence that we’re getting nearer to that," Representative Mike Turner, an Ohio Republican and chairman of the House Armed Services Committee, said. "This would seem to be something that needs to be done quickly and expeditiously. This should not be a research project. This should be a fix-it project."

The Navy, Marine Corps, and Air Force already know that ignoring the issue isn't an option, but the root causes of the problems remain elusive. In the meantime, it doesn't seem like a bad idea to give more aviators new wristwatches.