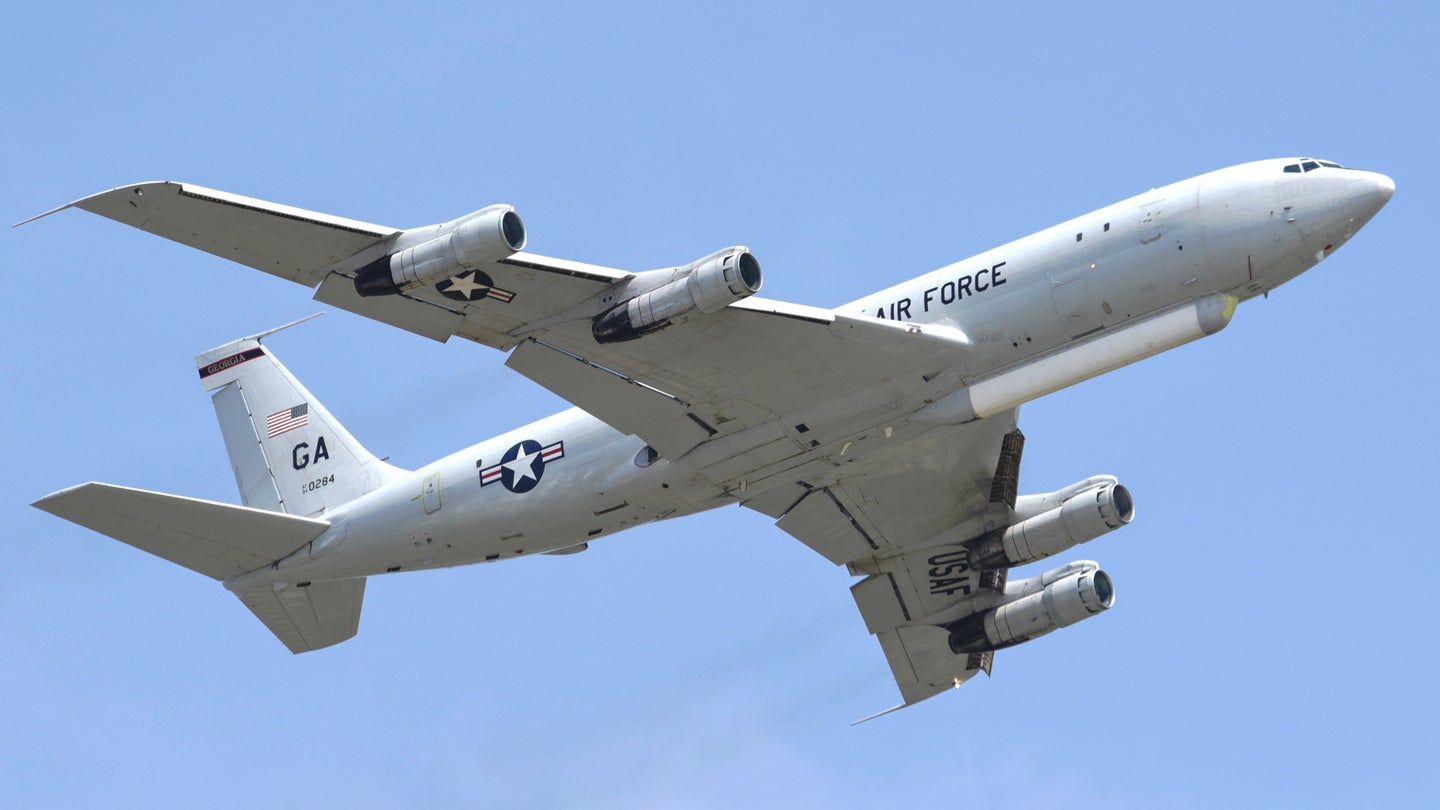 The U.S. Air Force says it will pursue a “distributed” combination of existing manned and unmanned aircraft with new sensors and other equipment as the replacement for old E-8C Joint Surveillance Target Attack Radar System battlefield management command and control aircraft, or JSTARS. But its seems increasingly clear that the service will need to add a new low-observable sensor node to this mix if it realistically expects to be able to extend the reach of those surveillance capabilities into heavily defended areas, especially during any potential large-scale high-end conflict, especially against a near-peer opponent such as Russia or China.

The Air Force had previously planned to “recapitalize” the E-8C’s ground surveillance and command and control functions into a smaller, more modern airframe with improved radars and communications equipment. With its budget request for the 2019 fiscal year, which it released earlier in February 2018, it formally announced it would scrap that plan in favor of mix of upgraded E-3 airborne early warning and control planes, high-flying RQ-4 Global Hawk unmanned aircraft, and medium-altitude MQ-9 Reaper drones.

To support this new concept, seven E-3s will receive improved sensors, as well as updated communications gear and data links to be able to better share a variety of information with other aircraft and troops on the ground. The Block 40 Global Hawks will also get improved connectivity so they can distribute data from their own multi-purpose radars, which can operate in a ground moving target indicator (GMTI) mode, in near real time. Lastly, some Reapers will get a new GMTI-capable radar.

“If that's the solution, it won't survive,” Secretary of the Air Force Heather Wilson said of the earlier concept of supplanting the E-8C with a modified business jet type aircraft in a speech at the Air Force Association’s annual Air Warfare Symposium on Feb. 22, 2018. “We think we presented something that can help us in a highly contested environment.”

It’s not clear, however, how the E-3, which uses an airframe based on the 1950s-era Boeing 707 airliner just like the E-8C, or the relatively low- and slow-flying MQ-9 in particular would be any more survivable than a militarized bizjet in an a high threat situation full of advanced combat aircraft and integrated air defenses with cuing from various long-range ground, air, and even space-based sensors. The RQ-4 might be able to use altitude to its advantage, but it can’t fly as high as the venerable U-2 Dragon Lady manned spy plane, which was itself already increasingly vulnerable to surface-to-air missiles by the 1960s.

So it's not necessarily surprising that some of the service’s senior leaders have already begun publicly questioning whether this mix of platforms will be sufficient for a future near-peer conflict. In September 2017, as it became steadily clearer that the Air Force would cancel its JSTARs replacement project, U.S. Air Force General Mike Holmes, head of Air Combat Command, the service’s primary warfighting arm, outlined the basic underlying problem at the Air Force Association’s main annual gathering in Washington D.C.

“The question really is, how long do we continue to fund the GMTI capability in the classic way we’ve done it: with an integrated platform that has a sensor and air battle managers onboard?” he asked rhetorically. “How much of our threat environment in the future will allow us to do that?”

In talking with reporters during a roundtable at the Air Warfare Symposium on Feb. 22, 2018, Holmes pointedly and unambiguously said the MQ-9 specifically would not be able to penetrate into heavily defended areas during a high-intensity conflict, according to Air Force Magazine. It “depends on whether you’re going to use the MQ-9 against a great power or … the way we’ve been using it … in a permissive environment,” the general added in response to a question about whether there was a need for a more survivable, and potentially stealthy, replacement for the Reaper.

The War Zone’s own Tyler Rogoway has already explored this issue in depth, noting that the Air Force appeared to be moving toward developing a new, low-observable platform – or using a classified system it already has – to act as an important sensor node as part of a distributed "system or systems" to support the battlefield management and command and control mission, also referred to as BMC2. Such an aircraft could be manned, unmanned, or even a pilot-optional design and would use its systems to gather battlefield intelligence in high threat areas near or forward of the front lines, all the while relaying that information back to other aircraft or ground command centers with the ability to process it and pass it along to other units.

This would hardly be the first time the Air Force has looked into this type of aircraft. In the 1970s, the service was proved the concept was viable during the Battlefield Surveillance Aircraft-Experimental (BSAX) program, which used Northrop's Tacit Blue stealth demonstrator, equipped with a special low probability of intercept radar that reduced the chances the enemy would detect the aircraft, to explore the idea of low observable platform that could operate for long periods in heavily defended areas and spot and track enemy forces. That heavily classified project ran in parallel to the public Pave Mover radar program, which eventually evolved into the main sensor on the E-8C.

The Air Force has already disclosed the existence of Lockheed Martin’s RQ-170 Sentinel stealth drone and experts widely believe the service has since acquired a larger, higher-flying, and more capable low-observable unmanned aircraft from Northrop Grumman, commonly referred to as the RQ-180. Both aircraft likely carry radars with both synthetic aperture imaging and GMTI functionality or have the option to do so as necessary.

At the tactical level, this type of sensor is particularly well suited to persistent surveillance missions to record “patterns of life” of particular individuals or groups of individuals to help determine the best time to strike them or conduct a physical raid. One or more Sentinels performed that task covertly over Pakistan in the lead up to the operation that resulted in the death of Al Qaeda leader Osama Bin Laden.

But a larger stealthy sensor platform able to carry a larger, more powerful radar could offer much more capability than that, conducting long-endurance missions to collect radar imagery and other data, monitoring enemy movements across a wide area deep inside hostile territory with a low likelihood of detection. This in turn could give air and ground commanders a much better picture of the overall battlefield and an opponent's activities, even in denied areas.

The up-coming B-21 Raider stealth bomber's high-altitude design points to the possibility that it could function as a penetrating sensor node in addition to its primary strike mission, too. It could also serve as a more survivable link between stealthy drones and other aircraft or troops on the ground compared to the existing bizjet-based E-11A Battlefield Airborne Communications Node (BACN) aircraft or the BACN-equipped EQ-4B Global Hawk drone, but those capabilities are likely to come well after the first Raiders enter service in or around 2025. There are almost certainly other manned or unmanned low-observable aircraft in the classified space that might be able to perform some of these battlefield functions in the near- or mid-term time frames, too.

The new or improved sensors and data links the Air Force develops for its existing mix of platforms could easily end up on any future low-observable sensor platform, as well. General Holmes already indicated that this might be possible with the GMTI-capable radar Northrop Grumman has been working on as part of the now dead JSTARS replacement effort.

“That radar is kind of a modular radar,” he said at the Air Warfare Symposium, according to Defense News. “It’s built on taking modules and adding them together. So I think there may be uses for that radar.”

The Northrop Grumman video below from 2012 depicts its plans for a new, modular radar system for the JSTARS aircraft.

Northrop Grumman had designed the original JSTARS radar system and continues to be a leader in these types of ground surveillance sensors. The company is already developing a Long Range Radar, or LRR, to either supplement or supplant its AN/ZPY-5 Vehicle and Dismount Exploitation Radar (VADER) for the U.S. Army. Both of these systems are fast-scanning active electronically scanned array units with synthetic aperture imaging and GMTI capabilities. Either would be a good fit for the Air Force’s present plans to add an unspecified “dismount radar” to the MQ-9.

However, none of these are low probability of intercept optimized radars, which would be essential for an aircraft operating in a low observable configuration. Of course, it is very possible that Northrop Grumman, or another defense contractor, has already developed an more appropriate sensor for the RQ-170, RQ-180, or other classified platforms that it could use as a starting point or port over as is to any new stealth platform.

Again, there’s the distinct possibility that the Air Force has more options in the classified domain, both with regards to sensors and the equipment and software necessary to fuse and distribute that information in near real time across the battlespace. Advanced battle management systems might even be able to serve as central control point for distributed groups of manned and unmanned aircraft, helping to feed instructions to semi-autonomous drones while parsing the data they collect for dissemination to other nodes.

On the sidelines of the Air Force Association’s main conference in September 2017, Lockheed Martin’s Jack O’Banion, the Vice President of Strategy and Customer Requirements, Advanced Development Programs, told Defense News reporter Aaron Mheta that his company had taken some systems from its top secret projects and integrated them into their JSTARS replacement pitch, which used a modified Bombardier Global Express 6000 bizjet. With Northrop Grumman and Raytheon battling over who would build the plane’s main radar system at the time and using a commercial aircraft as the underlying platform, it’s more likely he was talking about the aircraft’s networking connectivity or other data processing tools.

Non-stealthy aircraft will still have an important role in any distributed concept, too. Having a broad range of sensors and battle management systems available will allow the Air Force to provide critical coverage in both the most contested environments and less contested ones simultaneously, and in cooperation with other services, producing as complete a picture of the battlespace as possible.

All told, it appears increasingly likely that the Air Force’s plan to upgrade its existing platforms to take over various parts of the JSTARS mission is just one part of the larger puzzle. The service itself seems skeptical that this will offer a realistic solution to provide these vital capabilities in a high-threat conflict environment against a near-peer opponent.

With the JSTARS replacement effort now officially dead, we’ll be keeping our eyes out for more hints about the exciting possibility that the Air Force is really working toward one or more penetrating, low-observable sensor platforms as it revamps how it performs the BMC2 mission.