In its latest budget request for the 2019 fiscal year, the U.S. Army is asking for more than $80 million to keep working on converting a number of de Havilland Dash-8-315 planes into RO-6A intelligence, reconnaissance, and surveillance aircraft. Thanks to a separate contracting announcement, we know they will each have a powerful combination of electro-optical, infrared, and hyperspectral cameras, wide-area surveillance systems, imaging radars, and signals intelligence gear when they start to enter service in 2020.

On Feb. 5, 2018, the Army released a request for information regarding a potential contract to support the service’s existing fleet of de Havilland Dash-7-based EO-5C aircraft, as well as perform maintenance and other functions on the future RO-6As. As such, the documentation includes a breakdown of the specific systems on both types of aircraft to help prospective vendors gauge whether they have the requisite knowledge base to keep them airworthy and fully mission capable.

In 2014, the Army began developing a plan to transition from the EO-5C, which it also calls the Airborne Reconnaissance Low-Multi-sensor (ARL-M), to the RO-6A, which it refers to as the Airborne Reconnaissance-Enhanced (ARL-E). The four engine EO-5Cs have been in service since the 1990s, but the Dash-7 airframe has been out of production since 1988, making the aircraft increasingly difficult to support.

The twin engine Dash-8-315 is also out of production, but Canadian firm Bombardier continues to make other aircraft in this series, and therefore a number of common spare parts, making it a much more practical choice for the future. The plane’s Pratt & Whitney Canada PW100 turboprops are each more than twice as powerful as the older PT6s on the EO-5Cs, which will make the RO-6A more capable and efficient despite having two fewer engines, as well.

In addition, the Army had previously hired contractors to operate Dash-8-based spy planes over Afghanistan and Iraq, which it subsequently purchased from those companies. Those aircraft, known by the program nicknames Saturn Arch and Desert Owl II, already have many systems in common with the service’s planned final sensor arrangement, making the full conversions to the RO-6A configuration less expensive and labor intensive than if the service started with a basic airframe.

So, what will the new RO-6A carry with all of its extra power? The February 2018 contracting notice lists more than a dozen separate systems in total, which is significantly more capability in one package than either the ARL-M or the existing contractor-operated Dash-8 types.

Each ARL-E aircraft will have two camera turrets, an MX-20D and an MX-20HD, compared to one MX-15 series and one MX-20HD on the ARL-M. Both feature full-color electro-optical and infrared cameras. The MX-20D has a laser range finder and target designator, as well.

The RO-6As will have Raytheon’s Airborne Cueing and Exploitation System-Hyperspectral (ACES Hy). The U.S. Air Force originally sponsored development of this sensor, which produces imagery that differentiates objects by their electromagnetic signature, making it possible to spot camouflaged or other hidden items, such as improvised explosive devices, which have a significantly different composition from their surroundings.

On top of that, the ARL-E planes will have an OGSystems Performance-Enhanced Airborne Reconnaissance Low, or PeARL, a wide-area aerial surveillance system. This sensor features up to six individual cameras and can collect imagery across a 5,500-foot wide area as the aircraft cruises along at around 10,000 feet.

As we at The War Zone often note, these wide-area sensors are important tools for monitoring activity across a broad portion of the battlespace and can allow intelligence analysts to retroactively trace enemy movements, potentially tracing them back to bases of operations or other points of interest. These multi-camera systems can also help collect information on a target’s “patterns of life” over time, helping determine when it might be best to try and strike or capture them without endangering innocent bystanders.

The contractor-flown Saturn Arch aircraft had both ACES Hy and PeARL already, as well as two additional sensors, known as Big Green and the Mission Sensor System. The U.S. government crafted those systems in-house and the Army will not migrate them over to the RO-6A. We don’t know what these pieces of equipment were specifically, but at least one could be a laser imaging system with similar capabilities to the hyperspectral camera. Both almost certainly came from the National Geospatial Intelligence Agency (NGA), which managed the project before turning it over to the Army in 2013.

According to the contracting notice, the ARL-E crews will be able to refine their searches and potentially cue the other sensors based on information from two separate Northrop Grumman imaging radars, the AN/ZPY-5 Vehicle and Dismount Exploitation Radar, or VADER, and the up-coming Long Range Radar (LRR). Since the LRR will use various VADER components and perform the same function, it is possible that the RO-6A will carry the AN/ZPY-5 first before replacing it with the new system.

Northrop Grumman says that both units are fast-scanning active electronically scanned array (AESA) radars with synthetic aperture (SAR) and ground moving target indicator (GMTI) functionality. The system can penetrate cloud cover, smoke, dust and other obscurants that might blind the aircraft’s other cameras.

And while it can’t produce a moving video feed, it is possible to string multiple images along to track changes in a target’s activity, giving the plane’s another persistent wide-area surveillance capability. The Army also had VADER on one version of the smaller Beechcraft King Air-based MC-12S Enhanced Medium Altitude Reconnaissance and Surveillance System, or EMARSS, and you can read more about that particular sensor’s capabilities here.

Rounding out the RO-6A’s sensor suite will be no less than six different signals intelligence systems, at least two of which will be able to detect and monitor enemy high frequency and very high frequency transmissions. Three more pieces of equipment come from DRT, a company that specializes in devices that mimic cellphone towers. These systems, commonly known as “dirtboxes” in reference to the firm’s name, can geo-locate a person’s position from their phone signal, while some variants can grab audio from calls and associated metadata.

We don’t know what the sixth system, referred to as “PRISM 2.X/EDM-B,” does in particular. However, PRISM is a codename associated with a National Security Agency (NSA) surveillance project that also dealt with monitoring phone calls. It is possible that the system allows the aircraft to receive additional data straight from NSA databases to help geo-locate and monitor particular targets. Regardless, the full array of systems on the RO-6A almost certainly offers more capability than the single Diamondback communications intelligence system from BAE Systems on the older EO-5Cs.

Each one of the new planes will also carry various data links, including a satellite communications system, in order to beam the data from its various sensors back to ground stations for exploitation and other "customers" in near real time during operations. Those systems, and the control stations inside the aircraft, will run off of a standardized computer architecture the Army calls Big Iron that should better allow the service to update software and integrate new or improved sensors in the future.

The Army currently plans to have the first of its converted Dash-8 spy planes in service by 2020, with the full fleet of eight aircraft on hand by the end of 2024. A ninth airframe with more limited systems will serve as a trainer for new crews.

The RO-6As will replace all of the EO-5Cs, which are presently based in the United States, forward deployed to Korea and Germany, and rotate through various sites in Latin America and Africa. If the Army's ARL-E project stays on schedule, we can expect to start seeing these new aircraft in those same locations in the next few years. 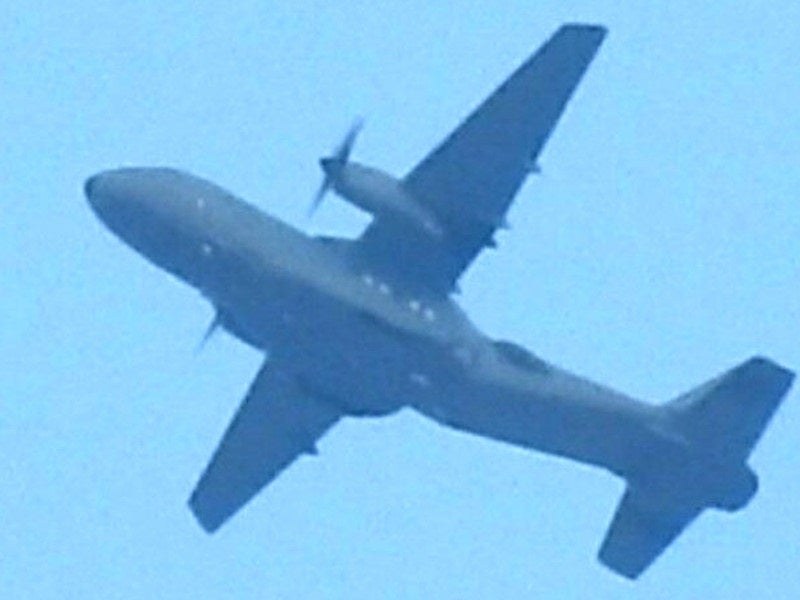 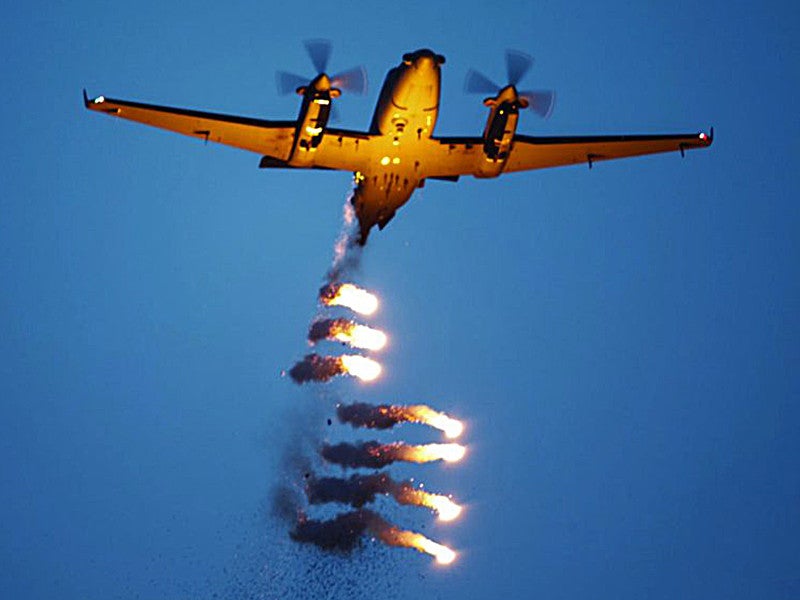 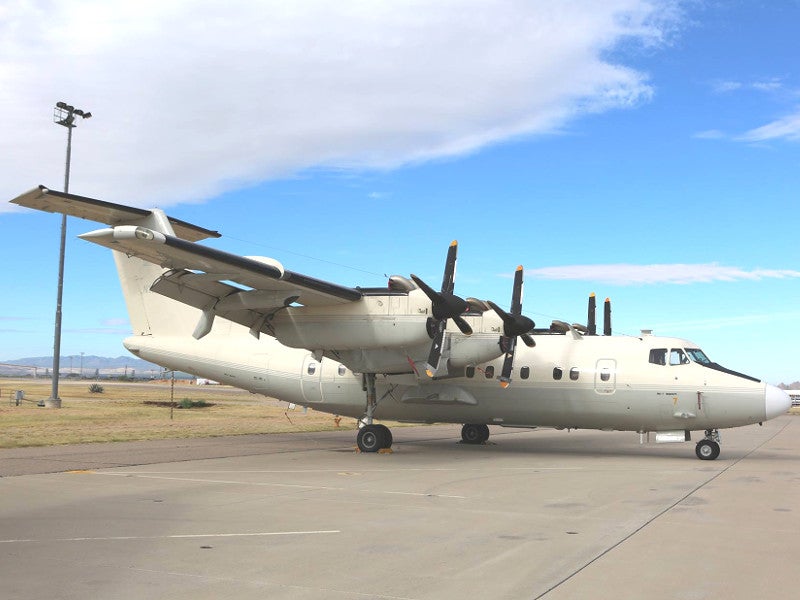 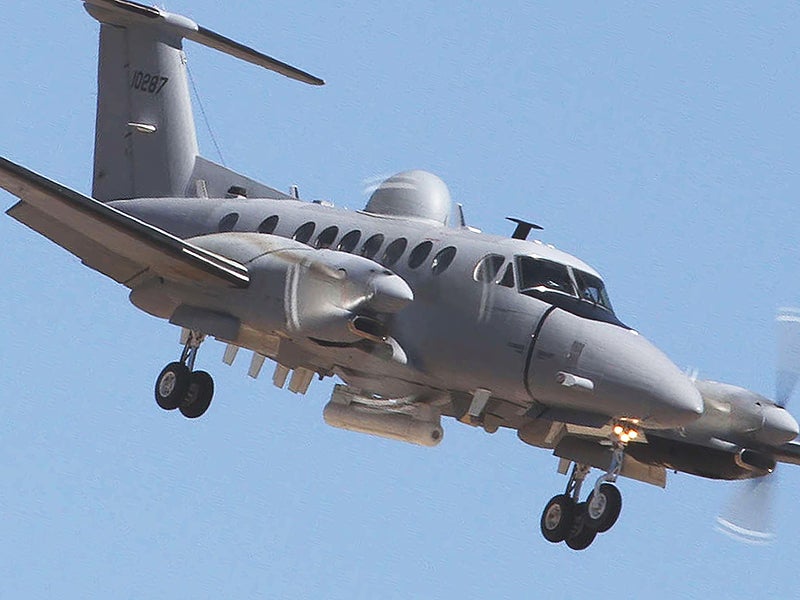