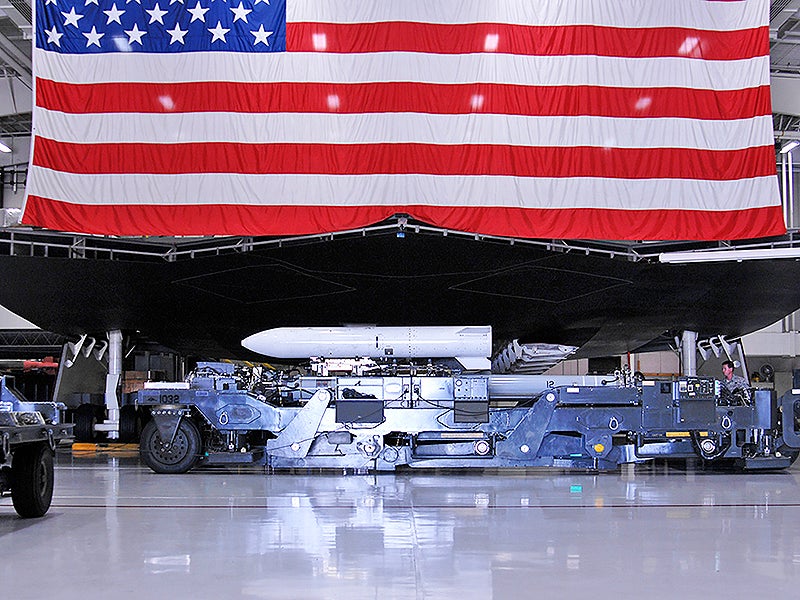 The B-2 Spirit can pack one hell of a punch. In addition to B-61 and B-83 nuclear bombs, it can carry as many as 80 independently targetable 500lb Joint Direct Attack Munitions or a pair of 33,000lb GBU-57 Massive Ordnance Penetrators, and a ton of other weapon types as well. When the B-2 goes on an actual mission, it usually carries a big load, and often times it lugs that load halfway around the world. Suffice it to say, loading up the jet safely and accurately with all those explosives is a serious task that requires constant training, especially considering that a nick to the stealth bomber's delicate radar absorbent skin can end a critical mission before it even starts.

This is where Whiteman Air Force Base's one-of-a-kind B-2 Weapons Load Trainer comes into play. The 67 foot long, 48 foot wide, 18 foot high replica of a B-2's center fuselage weighs in at 80,000 pounds. It was built by Lockheed and Hughes back in 1993 to support the B-2 program that was still nearly a half decade away from becoming operational at the time.

The contraption is used to train and certify Aircraft Armament Systems Specialists, also known as "Ordies," to load various weapons into the B-2's two cavernous weapons bays. Those bays work with the B-2's actual smart bomb racks and rotary launchers, as well as the weapons lift trailer that conveys them.

The 509th Maintenance Group trains airmen three shifts each day of the work week using the system, and it is especially handy for familiarizing novice airmen with the ins and outs of loading weapons onto America's most prized air combat asset. The tolerances can be very tight, with just two inches of clearance in some circumstances, and the checklists to follow and attention to detail required to make sure the weapons will drop as promised can be exhaustive.

There are also some unique issues for Ordies to contend with when it comes to servicing the B-2, like the jet's sharp sawtooth edges on its weapons bay doors and access ports—something you don't want to ram your forehead into. And it can be very dark under its umbrella-like charcoal gray fuselage. The munitions themselves aren't cheap either. A JDAM costs around $20,000. A stealthy Joint Air to Surface Standoff Missile (JASSM) can run upwards of three quarters of a million bucks.

Although publicly there isn't any mention of using the trainer for practicing nuclear weapons loading and to certify ground crews to do so, we can assume this is a major mission of the huge training aid as well. Nuclear weapons have their own set of requirements when it comes to conveying them to an aircraft and mounting them, including a bunch of security protocols such as manipulating the Permissive Action Links (PAL) that arm the weapon for use and select its desired yield. It's worth noting that in the top picture, a B-83 nuclear bomb's form factor is shown in front of the B-2 Weapons Load Trainer.

Having a full size device like this also allows the tiny fleet of B-2s—just 20 in the inventory, a fraction of which are mission ready at any given time—to operate without being hampered by weapons load training needs.

Other aircraft communities use derelict airframes and other setups for similar purposes, but the B-2's system is the most elaborate purpose-built device of its kind in the USAF's inventory. Other systems like it are catching on though, especially as expensive stealth fighters continue to fill-out the USAF's inventory. Eglin AFB has a similar system for the F-35, although it isn't nearly as imposing.

With the B-2 slated to be in the inventory for another 15 years, the big device will continue to get a lot of use, and it's very likely that a similar system will take its place in the shape and configuration of the upcoming B-21 Raider. Still, by almost every indication the B-21 won't be able to carry as much weapons tonnage as its forbearer B-2.

So there you have it, the B-2 Weapons Load Trainer. It takes its place alongside the Navy's USS CALASSES carrier mockup as one of the military's largest and most exotic training aids.