A trade dispute may hurt Boeing's chances of winning, but the project's so fraught with issues Canada has banned competitors from talking about it. 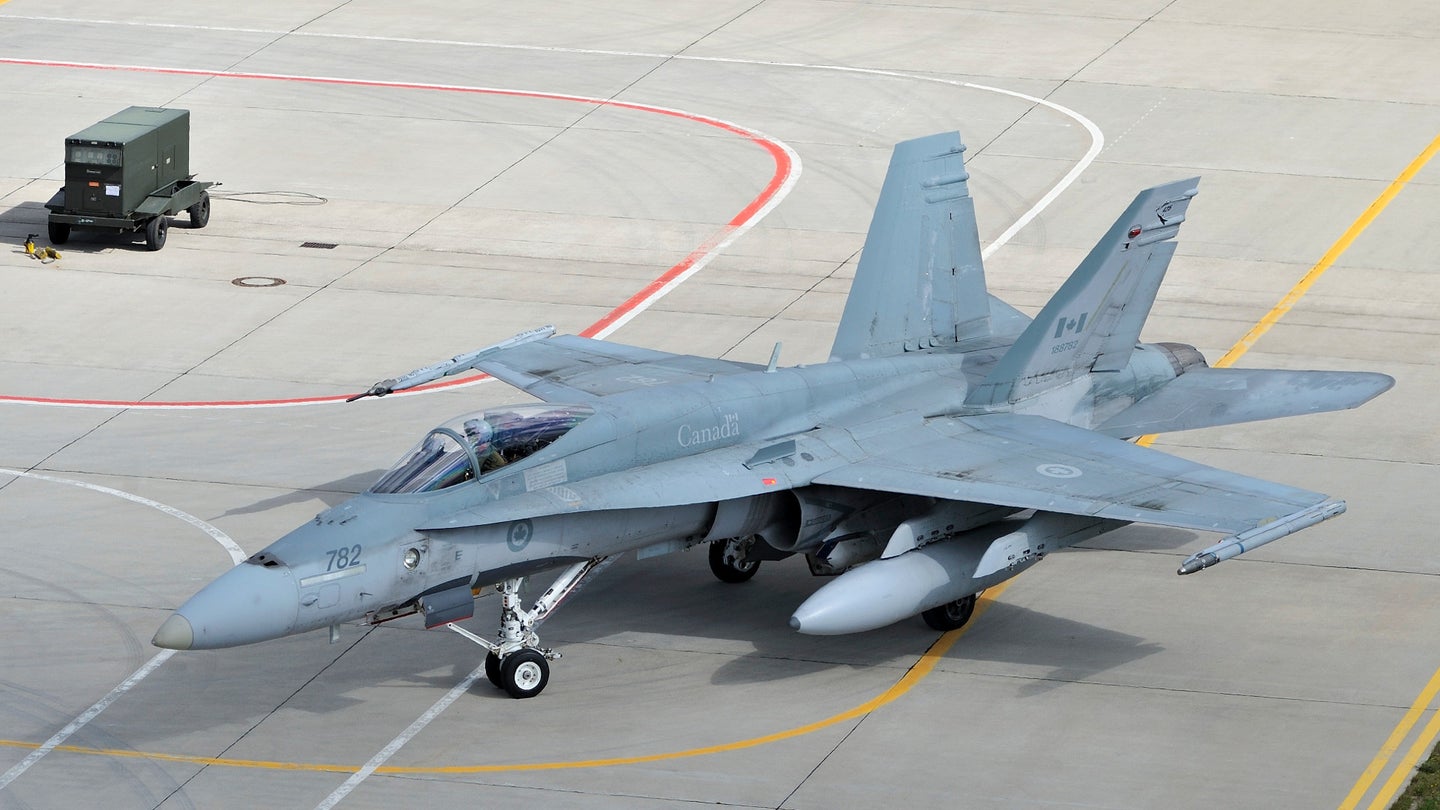 Despite having soured relations with the Canadian government with a major trade dispute, Boeing is reportedly still planning to submit a bid on the contract to replace the Royal Canadian Air Force’s aging CF-18A+ Hornets, almost certainly offering new F/A-18E/F Super Hornets. The Chicago-headquartered plane maker could try to make its submission more attractive by including upgrades its already working on for the Super Hornet, such as the range-extending conformal fuel tanks it is developing for the U.S. Navy.

On Feb. 15, 2018, Reuters, citing unnamed sources, reported that Boeing had formally applied to be a part of Canada’s fighter jet tender, which could be worth an between approximately $12 billion and $15 billion at the time of writing. According to a separate report from the Ottawa Citizen, in the winning company will begin delivering aircraft in 2025 and supply up to 88 planes by 2032.

Whether or not Boeing would take part in the competition has been the topic of much speculation after it filed a formal complaint against Canadian firm Bombardier in 2017. Boeing accused the Canadian firm of “dumping” its CSeries airliners into the American market at artificially low prices thanks in part to subsidies from the government in Ottawa.

In September 2017, the U.S. Department of Commerce sided with Boeing and proposed huge import tariffs of almost 200 percent on any Bombardier products entering the United States. This in turn precipitated a major international spat with not only Canada, but the United Kingdom, which is home to factory that employs more than 4,000 workers to build wings for the CSeries.

But in January 2018, the U.S. International Trade Commission rejected Boeing’s case and refused to approve the tariffs, leaving the American company with the options of abandoning the issue or starting its legal challenge all over again. The Canadian government has said that “past and recent economic behavior of potential bidders leading up to the procurement” will have an impact on their chances of winning the fighter deal, according to Reuters.

As a result of the trade fight, Boeing has already lost out on one potential deal to supply 18 Super Hornets to the Royal Canadian Air Force as an interim replacement for some of the CF-18A+ aircraft. Canada is now looking to purchase a number of older ex-Royal Australian Air Force F/A-18A/B Hornets instead.

It is very likely that the company decided it was not in its best interests not to pursue its dispute with Bombardier, at least for the time being. As we at The War Zone have noted before, Boeing has a strong case to make for supplying F/A-18E/Fs as Canada’s next fighter jet, which offers an established, reliable advanced fourth generation design with a number of highly desirable features, and synergistic commonality with their existing fleet of "legacy" Hornets.

AESA type radars are a relatively easy way to squeeze more capability out of an existing fourth generation fighter jet design, since they give pilots improved capability to identify and engage their targets and extended distances. Canada has already received U.S. government approval to buy the advanced AIM-120D air-to-air missile, which would make use of the Super Hornet's radar.

Canada could leverage the U.S. Navy’s Block III Super Hornet project and get jets with the same or similar improvements while sharing the cost burden. Boeing says those updated aircraft will have infrared search and track capability, which would offer another means to detect and target opponents at long range. The final American versions might also have certain low-observable features, such as a fully enclosed, aerodynamic weapons pod. With stealthy additions, the Super Hornet would be an even more attractive to Canada as a cost-effective alternative to the stealthy F-35.

By the time the Canadian government signs an actual contract for new fighters, many of those improvements are likely to be out of development and in production, as well, further reducing the costs. For example, on Feb. 14, 2018, the Navy announced it would pay Boeing nearly $220 million over the next four years to design and build conformal fuel tanks for the Super Hornet, another important part of the Block III upgrade program. The Chicago-headquartered firm has already explored the possibility of adding CFTs as part of past Advanced Super Hornet and Super Hornet International projects.

These add-on fuel packs will give the jets between 100 and 120 miles additional combat radius, something that is important for the Royal Canadian Air Force given its primary day-to-day missions of contributing to standing aerial patrols and quick reaction forces defending the skies over North America and those of NATO allies in Europe. CFTs have become another increasingly attractive way to get more capability out of existing fourth generation fighter jets since they both extend the aircraft's effective range without the need for drop tanks, freeing up that space for additional weapons or other stores.

Boeing did not respond to Reuters’ request for comment on the matter, but that’s not necessarily surprising since Canadian authorities have imposed an unprecedented gag order on all competitors. This appears to be an attempt to prevent potentially embarrassing information about the fighter jet replacement project from leaking out to the public. The non-disclosure agreement reportedly prohibits the firms from ever discussing the program, now or in the future.

Canada’s path to replacing its CF-18A+ jets has already been a particularly overwrought debacle. After taking office in 2015, Canadian Prime Minister Justin Trudeau, head of the Liberal Party, moved to halt the country’s participation the F-35 Joint Strike Fighter program and hold an all-new fighter jet competition, which had been a major campaign promise. Despite repeated difficulties and delays with the jets, the stealthy F-35 had been a particular favorite of his Conservative Party predecessor Stephen Harper.

The Trudeau Administration’s change of course on the matter prompted a political and legal backlash. For more than a year now, it has been struggling to make good on its promise to re-evaluate its fighter jet options, but also not lose its seat at the F-35 table in process. At the same time, the CF-18A+s are only getting older and less reliable, with only around 76 aircraft being active at all and far fewer than that being fully mission capable at any one time.

That’s where the aforementioned purchase of Australian Hornets comes in, but those additional jets are of a similar vintage and are unlikely to offer much of a capability upgrade in the meantime. It’s been hard even for Trudeau’s own cabinet to hide their displeasure at how things have gone.

“We needed [new fighter jets] a long time ago,” Canadian Defense Minster Harjit Sajjan said during a visit to Riga, the capital of fellow NATO member Latvia, in September 2017. “We had a plan in place, a very good plan that was going to fill the capability gap, invest in our current fleet, and start the fighter replacement competition.”

How the situation will play out now remains unclear. The Australian Hornets won’t even begin arriving until at least 2019, as the Royal Australian Air Force retires them. As such, deliveries of those 18 jets will happen over a painfully protracted period of three years. By then, the Canadian government hopes to have finalized deal for the full contingent of new fighter jets.

More importantly, Canada’s Federal Auditor General Michael Ferguson, who undercut the Harper Administration’s plans to buy the F-35 in 2012 with a damning report, is set to release another review of Canadian fighter jet procurement by the end of 2018. There’s no indication the government watchdog will find the kind of malfeasance in the government’s new plans that he did with regards to the Joint Strike Fighter, which included senior defense officials violating rules and deliberately hiding negative details about the state of the project.

However, it is very possible he could call into question whether Canadian taxpayers are getting the best value out of the current courses of action, including the purchase of dated second-hand jets that won’t even be operational for years to come. That’s exactly the kind of question the Trudeau Administration appears to want to try and avoid by making the competitors sign blanket, indefinite non-disclosure agreements about the multi-billion dollar project.

Canada won’t be able to wait too much longer to begin replacing its fighter jets if it wants to avoid a potentially dangerous gap in capability. Even with on-going service-life extension upgrades, the CF-18A+s are likely to be unsafe to fly by 2032, at which point they will have been in service for five decades. This will also more than decades longer than the Royal Canadian Air Force originally planned to be flying the Hornets

Unfortunately, the service has already had to push its planned retirement date for the CF-18A+s back multiple times.  Hopefully, the Canadian government can make sure the tired fighter jets don’t have to soldier on even longer.