Fielding an active defense and robust deterrent against school shooters will allow us to protect our kids in the near term. 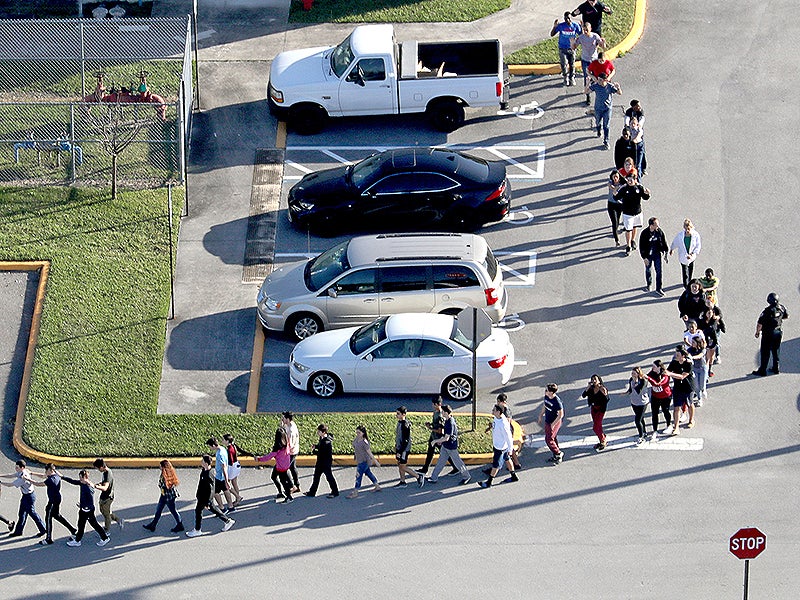 This site is about national security, military strategy and defense technology, as well as the policy issues related to those topics. Rarely do have much of anything to say about domestic issues and the politics that goes along with them. But in certain circumstances, we have an obligation to take on domestic topics that relate to the things we talk about on a daily basis, most of which regular people know or think little about. And considering the site is called The War Zone, when our schools are being turned into just that on a regular basis, this becomes an ideal platform to discuss potential countermeasures to stop such horrific acts from happening. And it just so happens I am very passionate about one such concept.

School shootings are this country's national disgrace, period. They reflect a lack of investment in our youth—and that doesn't necessarily mean monetary—and a culture that is failing its most treasured citizens and squandering its most precious resource without taking any meaningful corrective action.

We have touched on elements of great gun debate before, but this piece has nothing to do with that. Solving this problem in the long run will take a cocktail of actions and policies—there is no single act alone that will ensure it never happens again in one form or another. But there is something we can do in the near term that would drastically deter future assailants and limit the severity of their unthinkable acts. And maybe most importantly, it will allow our kids to stop thinking of themselves as sitting ducks as they go about their already challenging lives.

Once again, this piece is not about the Second Amendment or a position paper on what gun regulations should be enhanced, created, or eliminated. I just want to provide a way to allow our children to feel safe in their classrooms once again and to deny these inhuman monsters the opportunity to turn classrooms into shooting galleries.

We need to work immediately at fielding well armed and well trained "School Marshals" in our public schools that are proficient in close quarters battle and counter-assault tactics as part of a new and enduring school security program. Luckily, many decorated soldiers have returned home with incredible combat experience, are already proficient in this demanding mission set, and have proven themselves to be highly disciplined and effective under fire while in combat.

These protectors would be regularly trained, tested and evaluated to keep their vaunted position as guardians of our children. We must come to terms with the fact that there is no door system or passive security measure that will stop a suicidal shooter. Only having a dedicated operator on site, or even perceived to be on site, will stop this from happening or at least keep any incidents that do still occur from being so terribly destructive.

It's very odd that we already do this to secure our air travel system that already has multiple screening services and layers of security, but we leave our schools totally unsecured. Somehow deranged 18 year olds with rifles are less of a threat to public safety than a Saudi terrorist with a box cutter? It makes no sense.

And unlike international terrorists, one point that nobody seems to talk about is that almost all these diabolic fools who shoot-up schools have one thing in common: they do not want to fight another gunmen even though they are in most cases already on a “one way trip.” Almost every one of these assailants has either popped themselves before SWAT/SERT entered the facility to neutralize them or they are taken into custody without a gunfight. This is a critical factor that needs to be exploited. Something about their thought process does not want a fair fight. It’s all about exerting their “power” over innocents in an act of abstract revenge, not about going down in a blaze of demented glory.

With this in mind, the most logical countermeasure becomes glaringly clear—harden the target with actual security personnel that are there just to protect innocent life alone from the criminally insane. School Marshals would not be School Resource Police Officers, they are not there to discipline kids, keep them off drugs, or watch for petty infractions. They are there to vigilantly protect the herd and are willing and able to give their life doing just that. They can also help liaison with local police to come up with the best plans for better preventing attacks and responding to them once they occur.

If School Marshals were fielded as described, many of these shooters will simply stop showing up. The perverted attraction of the act is lost. And once again, this is not my opinion. It is a wildly peculiar commonality among these maniacs that validates this rationale.

As for those that say they don't want "soldiers" walking around their schools, one has to ponder what world are they living in? Our youth now train for active shooters just as they do for a common fire. They know they are sitting ducks that will have to wait till police arrive to hunt down the shooter. Considering the amount of destruction one individual can do in a short time against a defenseless and highly concentrated group of people, it is basically a roll of the dice as to if you survive or not.

And the "optics" argument against School Marshals is really irrelevant as they don't have to look like a SWAT team member or a soldier when on duty. Every time you see the President move around he is surrounded by guards outfitted with automatic personal defense weapons that can pierce body armor. You don't see these weapons because they can be concealed under a sport coat. In other words, a school resource officer is brandishing more weaponry than a School Marshal would in practice. During a time of heightened security, they can outfit themselves more elaborately in a uniformed manner. And who would complain about that? A police officer would look no more intimidating in this day and age.

Even some of the toughest gun measures being pushed in Congress would not have stopped the majority of school shootings, but a well paid, well-trained, decorated ex-US Army Ranger or Marine with a personal defense weapon hidden under his or her jacket could. Sure, such a proposal is not a cheap ask, but we have spent trillions fighting terrorism in debatable wars overseas and have spent hundreds of billions on building others nation’ armies and security forces, yet the worst kind of terrorism is happening right here at home on a regular basis, and to the people we supposedly care about and protect the most.

There are roughly 100,000 K-12 public schools in the United States. Considering that every school is different with different needs, and that most operate nine months out of the year, fielding 50,000 agents to cover our schools would seem acceptable. Put the cost of each agent and their training at $125,000 per year for estimations sake. That equates to $6.25B per year. That is less than ONE PERCENT of the 2019 defense budget.

In other terms, that is half the cost on one aircraft carrier or roughly seven percent of the 2019 budget for the wars in Afghanistan, Syria, and Iraq. Considering that terror and death are happening to our own citizens more frequently in our own schools than overseas, this seems like an uncannily logical investment. It would also provide incredible jobs, maybe some of the most revered in our country and in law enforcement, for the cream of the crop of America's veterans. You can scale up or down these numbers as you like, but the bottom line is that executing a program like this isn't going to break the federal government's budget.

It's well past time that we as a country stop waiting for a magic policy to fix this issue and start fighting back actively against this scourge. Every day we just sit and shrug while our kids go to school worrying if today is the day they will be mowed down by some disgruntled classmate. Once we have begun to secure our schools, actually debating gun regulations, America's culture of violence, our troubled public school system and the inability for the mentally ill among us to get the health care they so desperately need will become more feasible.

As for President Trump, who brands himself as champion of the Second Amendment and the figurehead of his America first strategy, School Marshals are something he can support without blowback from his base, and something he can do right now to show that we aren't going to accept the miserable status quo on this issue.

To those who say, "I don't know if this is the solution," I say, then what is? This has been going on regularly for nearly two decades without any solutions being put into play, and the problem is getting worse. Waiting for some magical shift in societal norms, political will, and American culture that will put an end to this issue is irresponsible as it is naive, especially seeing as people continue to die en masse from it.

Thanks for listening, and just like you, I feel so terribly sad for those in Parkland who lost their children, parents, teachers and friends to this terrible cancer in our society. The kids and faculty at that school seem so awesome, it literally couldn't have happened to nicer people. But no more, we can and must to do better, and just hoping the problem with go away is the height of stupidity and ignorance.