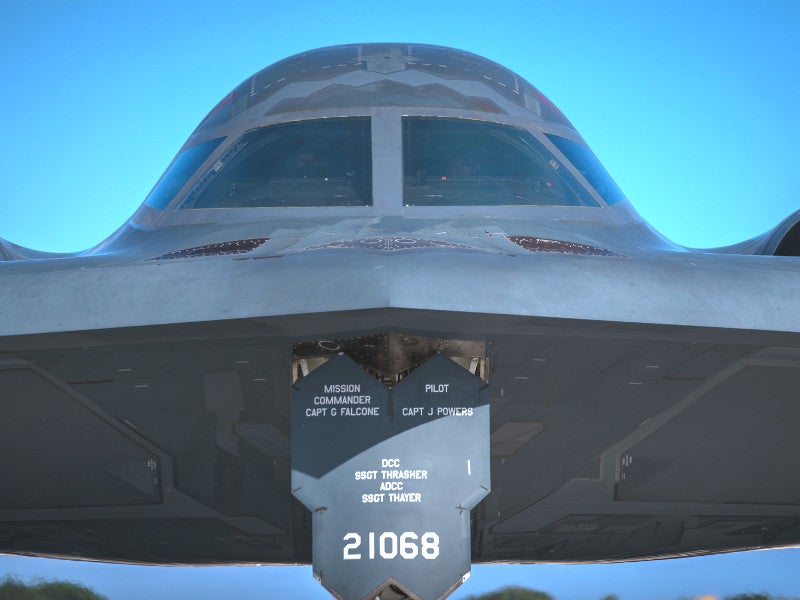 As part of its latest budget request, the U.S. Air Force has outlined a plan to almost double the size of its nuclear bomber force. What isn’t clear is how this course of action fits within the very hard limits on such aircraft set out in the New Strategic Arms Reduction Treaty, or New START, one of many bilateral arms control agreements between United States and Russia.

Earlier in February 2018, the Air Force disclosed a controversial concept to steadily replace its 20 B-2 Spirit stealth bombers and 60 B-1 Bone swing-wing bombers on a one-for-one basis with stealthy B-21 Raiders as those new aircraft enter service. The service wants to purchase at least an additional 20 B-21s, and possibly more, for a full fleet of at least 100 Raiders. At the same time, the 75 iconic B-52H Stratofortresses, more commonly known as the Big Ugly Fat Fellow or BUFF, will continue to fly at least until 2050.

According to 2019 budget documents, and to our documents we previously received via FOIA, the B-21 will be built with nuclear capability, with the aircraft ready for nuclear operations within two years of its initial operating capability.

The roadmap would give the Air Force a total bomber force of around 175 aircraft for at least 14 years, between 2036 and 2050. In 2036, the last of the B-1s are supposed to head to the bone yard, with the B-2s having gone there first four years earlier. The service hasn’t made it clear what will happen to the B-52 fleet after 2050, at which time the youngest airframes will have been in service for nearly 90 years.

But what is obvious is that even 175 bombers is significantly more than the Air Force has at present and could upend the composition of the U.S. military’s nuclear triad, which includes the B-2 and B-52, as well as Minuteman III intercontinental ballistic missiles (IBCM) and Trident D-5 submarine-launched ballistic missiles (SLBM), each of which can hold up to a dozen individual warheads, and the Ohio-class nuclear submarines that carry them. The United States and Russia can only have 700 nuclear-capable ballistic missiles and bombers in total under New START.

In 2010, U.S. President Barack Obama and his Russian counterpart Dmitry Medvedev signed the New START deal. In addition to the restrictions on total deployed delivery systems, the treaty also limits the parties to 1,550 deployed “warheads,” with each re-entry vehicle on top of a missile and each individual bomber counting as a single warhead. The agreement does not cover smaller delivery platforms and weapons, such as multi-role fighter jets carrying nuclear gravity bombs or nuclear-capable artillery systems.

For each bomber the Air Force wants to add, the U.S. military would have to tweak the number of ICBMs and SLBMs it has to remain compliant with New START. And that wouldn’t mean just putting extra missiles in a warehouse somewhere, either.

The treaty includes a provision that both the United States and Russia can’t have more than 800 functional launch tubes for ballistic missiles – land-based silos or launch vehicles or individual launchers on submarines – or bombers, even if they're not active. The idea behind that requirement is specifically to prevent either side from building up a reserve “breakout” capability that would allow them to immediately field a significantly larger nuclear force if the deal lapses or collapses. It’s worth noting that the Air Force does keep a number of B-52Hs stored in a semi-active condition in order to replace losses, which already count toward that extended total.

The United States could choose one of a number of options to make the Air Force’s bomber plans work within the context of New START. It may seem like one solution would be to have Northrop Grumman deliver a nuclear-capable B-21A and a non-nuclear B-21B.

In preparation for New START and its force restrictions, the Air Force already modified its B-1s to remove any nuclear capability and make it difficult, though not impossible to restore that functionality. This process involved cutting out wiring and other control systems to arm nuclear weapons, as well as physically destroying the special pylons that would have carried in its bomb bays.

Of course, this conversion program was relatively straight forward since the Air Force performed the modifications across the entire fleet of Bones and disposed of the nuclear weapons related equipment for the aircraft entirely. It would require significantly more time and money to develop a non-nuclear B-21 variant that the U.S. military could not readily convert into a nuclear-capable bomber in order to avoid immediate complaints from Russia about possible New START.

More importantly, it would open up the B-21s to a rigorous inspection regime that could give the Russians an opportunity to glean other details about their construction and capabilities. Each year, Russia sends experts to physically check to make sure the Air Force's B-1s are still in compliance with the treaty. This makes the idea a virtual non-starter and very likely explains why the Air Force abandoned earlier plans to take delivery of non-nuclear B-21s initially and add in a nuclear weapons delivery capability later.

The Air Force could also reduce the number of new ICBMs it is planning on buying as part of the Ground Based Strategic Deterrent (GBSD) program. Those new missiles are set to replace the entire Minuteman III force, but we don’t know if that will be on a one-for-one basis.

The United States will get some room to maneuver with New START's limits as it replaces its existing Ohio-class ballistic missile submarines with the Columbia-class. The latter boats have only 16 tubes for Trident D-5 SLBMs compared to the Ohio-class' 24. However, the U.S. government’s latest Nuclear Posture Review (NPR), which heavily emphasizes those boats as central to its new, flexible “tailored deterrence” model, proposes development of two new types of nuclear weapons – a modified Trident D-5 with lower yield warheads and a nuclear-tipped submarine launched cruise missile, or SLCM – for them. You can read more about those developments here.

Depending on how many warheads the reconfigured Trident D-5s actually carry and how the New START treaty applies to the nuclear SLCM, there could be even more room for additional bombers or they could end up pushing the United States over New START's limits. There's no guarantee that the U.S. military will actually field those submarine-based options, either.

There is also the possibility that President Donald Trump and his administration are working under assumption that New START will lapse and the issue will become moot. The treaty will expire on Feb. 5, 2021, though there is an option to extend it through to 2026. After that, the two countries would need to negotiate a new deal. The Air Force seems to already be planning its bomber fleet independent of the treaty’s restrictions.

“Our approach to it is – it’s an early decision – we know we’re going to need at least 100 [B-21s], we’ll possibly need more than that,” U.S. Air Force Lieutenant General Jerry Harris, Air Force Deputy Chief of Staff for Strategic Plans and Requirements, told the lawmakers in May 2017. “We do agree that probably 165 bombers [in total] is what we need to have.”

Given the overall poor state of U.S.-Russian relations at present, the U.S. government might try to turn the bomber strategy into a negotiation tactic to try and get the Kremlin to concede more in any follow-on treaty or goad it into actually abiding by existing agreements. Though the Kremlin vehemently denies the accusations, the United States says it is in violation of its obligations under the original START and New START and the Intermediate-Range Nuclear Forces Treaty, or INF, with the RS-24 Yars ICBM and the SSC-8 ground-launched nuclear-capable cruise missile respectively. Earlier in February 2018, Russia also permanently deployed the nuclear-capable Iskander-M road-mobile short-range ballistic missile system to its Kaliningrad enclave on the Baltic Sea, a controversial, but not banned move it had threatened to make years ago in response to Poland hosting U.S. military anti-ballistic missile defense sites.

As such, the United States has increasingly adopted the position that it could use its own treaty-busting developments to push the Russians back into compliance. American lawmakers have already ordered the U.S. military to study what it would take to develop and field a land-based missile system, conventional or nuclear, that violates the INF. In comments to reporters on Feb. 1, 2018, Greg Weaver, Deputy Director for Strategic Stability in the U.S. Military’s Joint Staff Strategic Plans and Policy Directorate, or J5, also floated the idea of cancelling the proposed submarine-launched cruise missile in the NPR if Russia were to come back into compliance with the INF.

“I want to make certain that our negotiators have something to negotiate with, that we want Russia back into compliance [with the INF],” Secretary of Defense James Mattis during a hearing before the House Armed Services Committee on Feb. 6, 2018. “We do not want to forgo the INF, but at the same time we have options if Russia continues to go down this path.”

But using the different nuclear weapon systems as bargaining chips could be risky propositions that could just as easily trigger an arms race rather than reductions in kind. We at the War Zone already examined the factors at play with the INF in depth, a failure of which could have a cascading impact on a variety of bilateral and multinational arms control agreements that the United States and Russia are party to. Those same conclusions could just as readily apply to New START collapsing or United States being unable to negotiate a follow-on deal.

The Kremlin has already put a “moratorium” on compliance with the Conventional Forces in Europe (CFE) treaty, which sets limits on how many troops it can have arrayed along its western borders. The United States says it has been abusing the Open Skies agreement, which allows for legal surveillance operations over member countries in the interests of transparency, as well. The U.S. government says the Kremlin wants to gather more intelligence than the spirit of the agreement allows for and that it has been unfairly impeding overflights of its own territory.

Russian President Vladimir Putin has routinely indicated that he believes many of the deals with Soviet Union, or the initial Russian successors, cut with the United States no longer apply or that the U.S. government has actively exploited them for its own gains. Regardless of whether those grievances are real or a way to excuse Russia’s increasingly belligerent foreign policy, they do appear to be the underlying rationale for the country’s flurry of strategic weapons developments.

The Air Force’s plan to practically double the size of its nuclear bomber force could compel the Kremlin to reconsider its own courses of action, or it could simply reinforce the idea that agreements like New START are increasingly irrelevant.