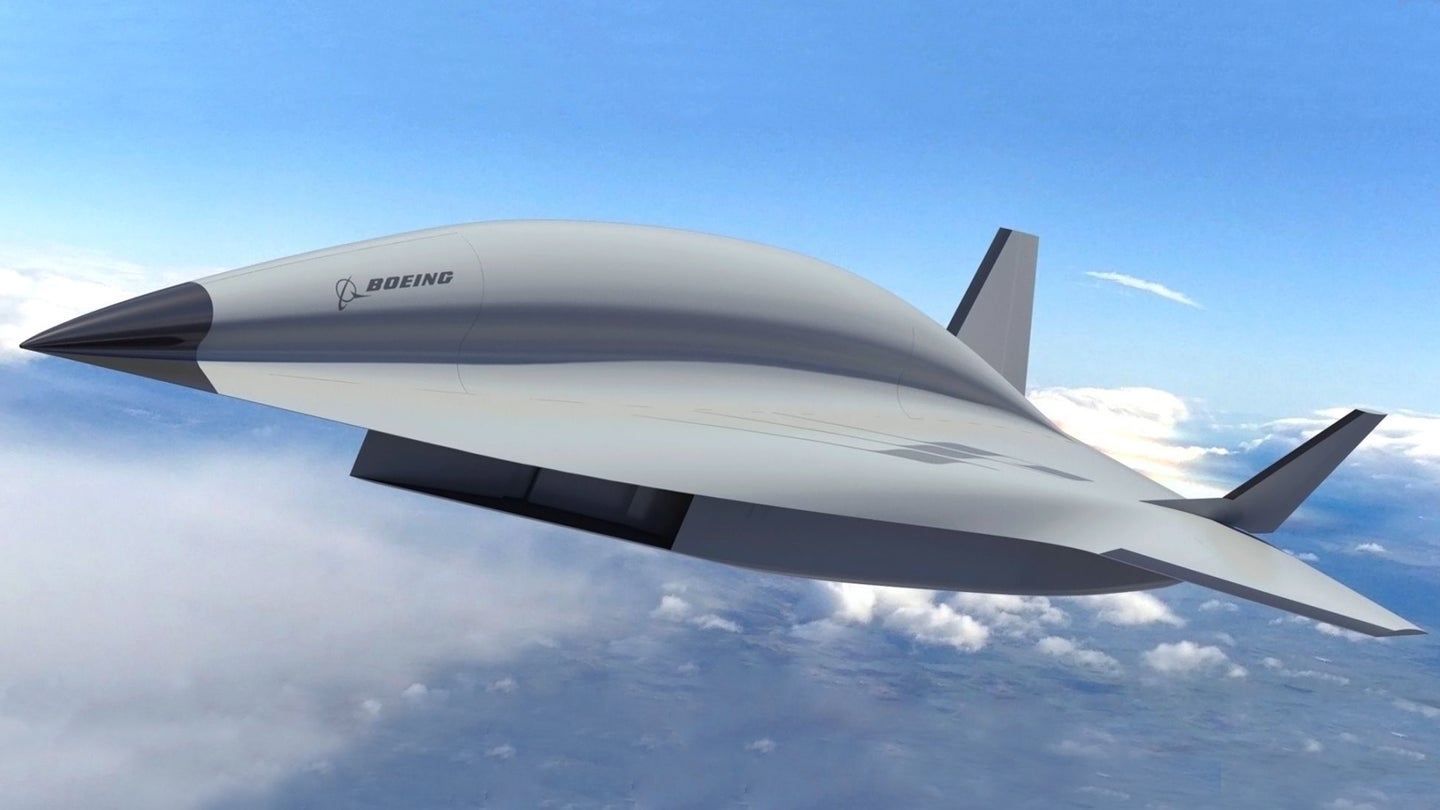 Boeing surprised the aerospace world with the unveiling of their own notional hypersonic aircraft design that intends to compete with Lockheed's shadowy hypersonic demonstrator aircraft and its upscaled "SR-72" platform that could follow. But this news comes as more evidence has emerged supporting The War Zone's long held claim that Lockheed's Skunk Works is much farther along in the development process of their hypersonic aircraft than they try to let on.

Lockheed's incessant chatter about developing a notional "SR-72" hypersonic (greater than mach five speed) reconnaissance and strike aircraft caused me to conclude that the initiative was much farther along than what we were being outright told. Eventually I even wrote a piece just on this alone, along with a fallow-up about a claimed sighting of such an aircraft at the USAF sprawling Plant 42 installation in Palmdale, California.

Early in January, 2018 more evidence to support exactly this hypothesis emerged via a speech given by Lockheed's Jack O’Banion, Vice President of Strategy and Customer Requirements, Advanced Development Programs (Skunk Works), at The American Institute of Aeronautics and Astronautics SciTech conference. During the address, O'Banion clearly referred to the company's hypersonic aircraft as if it was already a reality, stating in part:

You can watch his comments on livestream here. Fast forward to the 59 minute mark.

Now we see Boeing jumping into the fray with their own design—unveiled in model form at the same conference that O'Banion made his eyebrow-raising remarks—which seems more like an attempt to compete in what is becoming an increasingly clear future growth space than anything else. And this push didn't begin yesterday.

In 2016 Boeing initiated a study with its propulsion partner Orbital ATK on a "combined cycle" engine similar to the one Lockheed proposes for its SR-72 concept according to Aviation Week. Additionally, Boeing has decades' worth of research from other high-speed programs it and the companies it has gobbled have been a part of over the years to leverage as well, going as far back as theXB-70 Valkyrie—which this new notional aircraft is named after—to more modern programs like the X-51A and X-43 hypersonic demonstrators. Other past clandestine programs also likely factor in to Boeing's breadth of knowledge on this exotic area of aeronautics, as is the case for Lockheed as well.

Boeing envisions a similar design and test evolution for their proposed hypersonic program as Lockheed put forward years ago, which includes creating a fighter-sized demonstrator vehicle for initial testing, and then upscaling that design into a large operational aircraft roughly the same size as the SR-71 Blackbird. And like Lockheed's offering, Boeing's would also be unmanned.

As far as the two designs go, they look very similar, although Boeing's offering utilizes a single inlet design reminiscent of its XB-70 Valkyrie namesake and has some features similar to the X-43, like its twin tails.

It seems possible that Boeing is looking to get the USAF interested in some type of competition between it and Lockheed for an operational hypersonic aircraft contract in the future. Seeing as both firms propose the same pathway to getting there, including flying smaller demonstrators first, such a goal may seem logical at face value. But considering this is highly sensitive technology that would exist in the compartmentalized (classified) world, a traditional "fly-off" is unlikely.

Above all else, it seems as if Lockheed is already at or beyond that stage with their own program and the USAF isn't likely to wait around for Boeing to catch up. Lockheed's unique pedigree in this space is also undeniable, with the SR-71 under their belt and probably a bunch of other high-speed test programs that have taken place in shadows over the last half century.

In other words, although Boeing's interest in the reusable hypersonic aircraft space is admirable, the jet may have already left the hangar so to speak. Boeing has received some funding from the Air Force Research Laboratory into hypersonic powerplant design, but unless the firm is willing to self-fund the development of a flying prototype, it seems unlikely the Valkyrie II concept could compete with Lockheed in the near term. And it costs big bucks to undertake such an effort, with Lockheed's CEO Marillyn Hewson stating in the past that a fighter-sized hypersonic demonstrator alone would likely run about a billion dollars.

A similar situation seems to have occurred in the late 2000s when it comes to stealthy penetrating unmanned aircraft, another space where Lockheed quietly succeeded in while Boeing, who pioneered the technology in the unclassified realm, was left without any major prospects. You can read about this saga in this past TWZ special feature.

Regardless of who stands the best chance of becoming America's prime hypersonic plane provider, one thing is clear, in an age of where peer-state competition is once again all the rage, hypersonic vehicles of all types are slowly creeping onto center stage, and America's potential enemies aren't sitting still in this regard either. With this in mind, there will be room for multiple purveyors when it comes to future hypersonic weaponry in general, but for such a niche capability as a large reusable hypersonic aircraft, that is probably not the case.