The U.S. military’s latest test of its Standard Missile 3 Block IIA ballistic missile interceptor has reportedly failed.  So far, it’s unclear what happened, and the weapon is still in development, but it does come amid months of escalating tensions between the United States and North Korea and reports that authorities in Pyongyang are planning a parade with hundreds of ballistic missiles, likely in no small part to dissuade the U.S. government from considering a limited "bloody nose" strike.

CNN was first to report the apparent failure on Jan. 31, 2018. The test launch would be the fifth for the weapon, commonly referred to as the SM-3 Block IIA, and the third in which it attempted to actually intercept another missile. The last such experiment, which occurred in June 2017, also failed, but this was because a U.S. Navy sailor accidentally triggered the missile’s self-destruct function. Another SM-3 Block IIA had successfully knocked down a target for the first time four months earlier. The U.S. military plans to eventually add the weapons to the Navy’s Arleigh Burke-class destroyers and install them at fixed Aegis Ashore sites in Europe. Japan is a major partner in the program and plans to equip its own warships with the weapon and establish land-based Aegis Ashore facilities within its territory.

According to CNN, this was a deliberate decision made specifically in light of heightened tensions with North Korea. The U.S. military plans for the SM-3 Block IIA to be a critical part of its overall ballistic missile defense shield, which is primarily focused on defeating threats from smaller opponents, such as North Korea and Iran. The United States says its systems are not intended to negate the strategic deterrent capabilities of potential near-peer opponents, such as Russia or China.

Though MDA only expected earlier versions of the SM-3 to take on medium- and intermediate-range ballistic missiles, the Block IIA missile could eventually provide another, if more limited defensive option against higher- and faster-flying ICBMs in certain circusmstances. The War Zone has previously examined the missiles capabilities and potential limitations in depth here.

Missile defense is a complicated endeavor overall and failures are not uncommon. Whether they're successful or not, these test launches are necessary in order to gather important data to further improve the weapon.

The development of SM-3 Block IIA has taken on new significance in light of the rapid progress North Korea has made in its ballistic missile program, specifically the development of intercontinental ballistic missiles (ICBM). In November 2017, the North Koreans revealed their Hwasong-15 ICBM, which could potential carry a nuclear warhead to any point in the continental United States.

So it’s not necessarily surprising that MDA might be disinclined to report another failure, regardless of the cause, which it might not even fully understand yet. Japan could also be concerned about what message publicly announcing even the basic details surrounding the failure might send to North Korea or other potential adversaries, too.

The situation on the Korean Peninsula already looks set to become more politically and militarily complicated. Also on Jan. 31, 2018, CNN reported, citing anonymous sources, that a North Korean parade in February 2018 would feature hundreds of this class of weapons, including dozens of Hwasong-15s, “to scare the hell out of the Americans.”

North Korea will stage the event ostensibly as an annual tribute to the founding of its military, the Korean People’s Army. However, this had traditionally occurred in April.

The new date, February 8th, conveniently happens to be the day before the 2018 Winter Olympics start in the South Korean city of Pyeongchang. Both Koreas will march in the open ceremony together in a gesture seen as an attempt de-escalate tensions, but which critics have warned is a way for authorities in Pyongyang to drive a wedge between officials in Seoul and their American counterparts, who have continually advocated for a tough stance toward North Korea.

In deference to their South Korean allies, the United States has agreed to push back major annual bilateral defensive military exercises, which North Korea routinely claims are actually preparations for a northward invasion. In light of that development, officials in Pyongyang reiterated a common demand for South Korea to end the drills permanently.

But with reports about the SM-3 Block IIA’s failure already leaking out, it’s not clear if MDA’s decision not to discuss the matter publicly will have the intended impact. The U.S. government is unlikely to rely on open reports in the press to reassure its Japanese and South Korean allies about the progress of the program and its commitment to defending them against North Korean threats. North Korea is still likely to at least use the incident for propaganda purposes, regardless of the facts, as well.

And the actual effectiveness of America’s existing ballistic missile defenses is an important part of the growing debate about a potential “bloody nose” strike against North Korea. President Donald Trump again referred to what his administration called a "campaign of maximum pressure," which reportedly includes various military options, during his first State of the Union address on Jan. 30, 2018.

"North Korea’s reckless pursuit of nuclear missiles could very soon threaten our homeland," Trump told the assembled lawmakers and guests on Capitol Hill. "We are waging a campaign of maximum pressure to prevent that from ever happening. Past experience has taught us that complacency and concessions only invite aggression and provocation."

Below is video MDA released from the successful test of the SM-3 Block IIA in February 2017.

Also on Jan. 30, 2018, Vice Chairman of the Joint Chiefs of Staff U.S. Air Force General Paul Selva offered some additional details on possible plans for a military operation against North Korea. The senior officer suggested that it might be possible to neutralize "most" of the country's nuclear-capable ballistic missile capability by striking at its associated infrastructure.

"Remember, missile infrastructure is not just the missiles," Selva told reporters in during a round table discussion in Washington, D.C. "If you're the poor sergeant that has to go out and launch the missile, and I blow up your barracks, you're not available to go do your job."

He also said the U.S. government believed that the North Koreans had not yet finished development of the terminal guidance and re-entry vehicle technology for a fully-functional nuclear-capable ICBM. The general acknowledged that they could have done so, but not yet demonstrated it publicly, but insisted that this possibility was remote.

"It is possible, although I think unlikely, that he has found a way to do the test without us knowing," Selva said. "But I can't envision what that test would look like, where he would be convinced that he has those components at a reliable-enough level of performance to declare that he's ready."

U.S. officials do appear to be in agreement that North Korea won't lack this capability for long. "We talk about him [Kim Jong-un] having the ability to deliver a nuclear weapon to the United States in a matter of a handful of months," Central Intelligence Agency Director Mike Pompeo told the BBC in an interview, adding that there was a good understanding of North Korean ballistic missile capabilities within the American Intelligence Community and among its foreign partners.

If the United States did decide to go ahead with a punitive strike against North Korea, it would almost certainly provoke a massive North Korean retaliatory attack against the United States and its East Asian allies, which could involve ballistic missiles, conventional artillery, and other conventional and asymmetric capabilities. With this in mind, its highly debatable that the U.S. military would be able to keep a small strike against Kim Jong-un's regime from rapidly escalating.

With years of talk of "decapitating" his regime from American and South Korean officials, its not clear he would ever be convinced any American strike would be limited in scope. It is not hard to imagine Kim Jong-un ordering a launch with a less-than-fully reliable nuclear-tipped ICBM, or even completely untested weapon, in a crisis where he believes the survival of his regime is at stake.

"If we believe that Kim is undeterrable without such a strike, how can we also believe that a strike will deter him from responding in kind?" Victor Cha, a professor at The Georgetown University and a senior adviser at the Center for Strategic and International Studies, a Washington, D.C. think tank, wrote in an op-ed in The Washington Post on Jan. 30, 2018. "And if Kim is unpredictable, impulsive and bordering on irrational, how can we control the escalation ladder, which is premised on an adversary’s rational understanding of signals and deterrence?"

The Trump administration had been considering Cha as a candidate for Ambassador to South Korea, but has since dropped that plan after the academic and former adviser to President George W. Bush on North Korea voiced these same concerns in private. It seems that other senior U.S. leaders have similar concerns, though.

“There’s plans out there that have been developed over the years [for military action on the Korean Peninsula],” U.S. Marine Corps Commandant General Robert told a gathering at the Center for Strategic and International Studies, a Washington, D.C. think tank, on Jan. 25, 2018. “If it were to go down, I am not sure it’s going to go down the way we planned it."

"It never does," he continued. "It would not be good for anybody.”

At the same time, though, there has been an almost worrying overconfidence from the highest levels of the U.S. government about the ability to ward off incoming ballistic missiles in such a scenario. The concern here is is that some American officials might feel there is a good enough chance able to escape a North Korean response to make the idea of punitive strike more viable.

The War Zone’s own Tyler Rogoway recently wrote a detailed dissection of the myths and realities of present missile defense capabilities, finding the truth lies somewhere in middle. The last SM-3 Block IIA failure doesn't indicate the program is failing, but it does underscore how difficult this this technology is to develop and how it would be foolish to rely on it in its present state as part of the planning for any military action against North Korea. 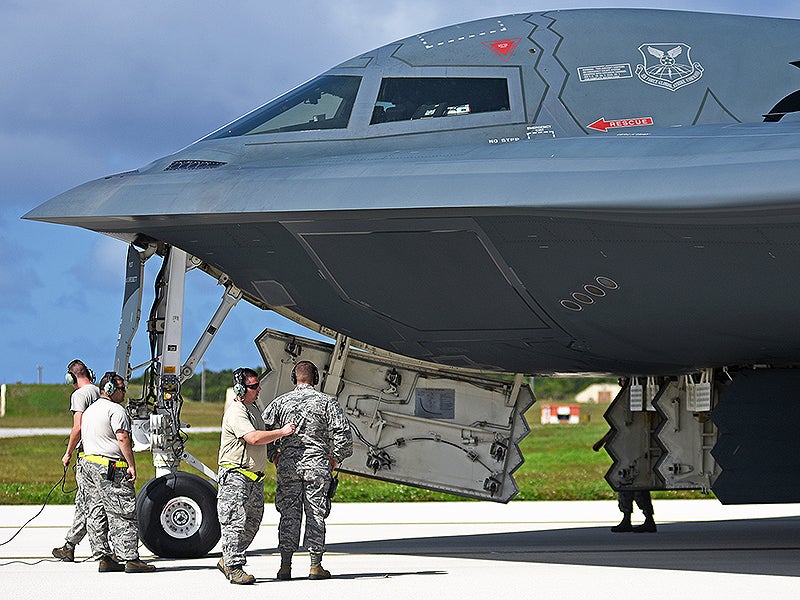