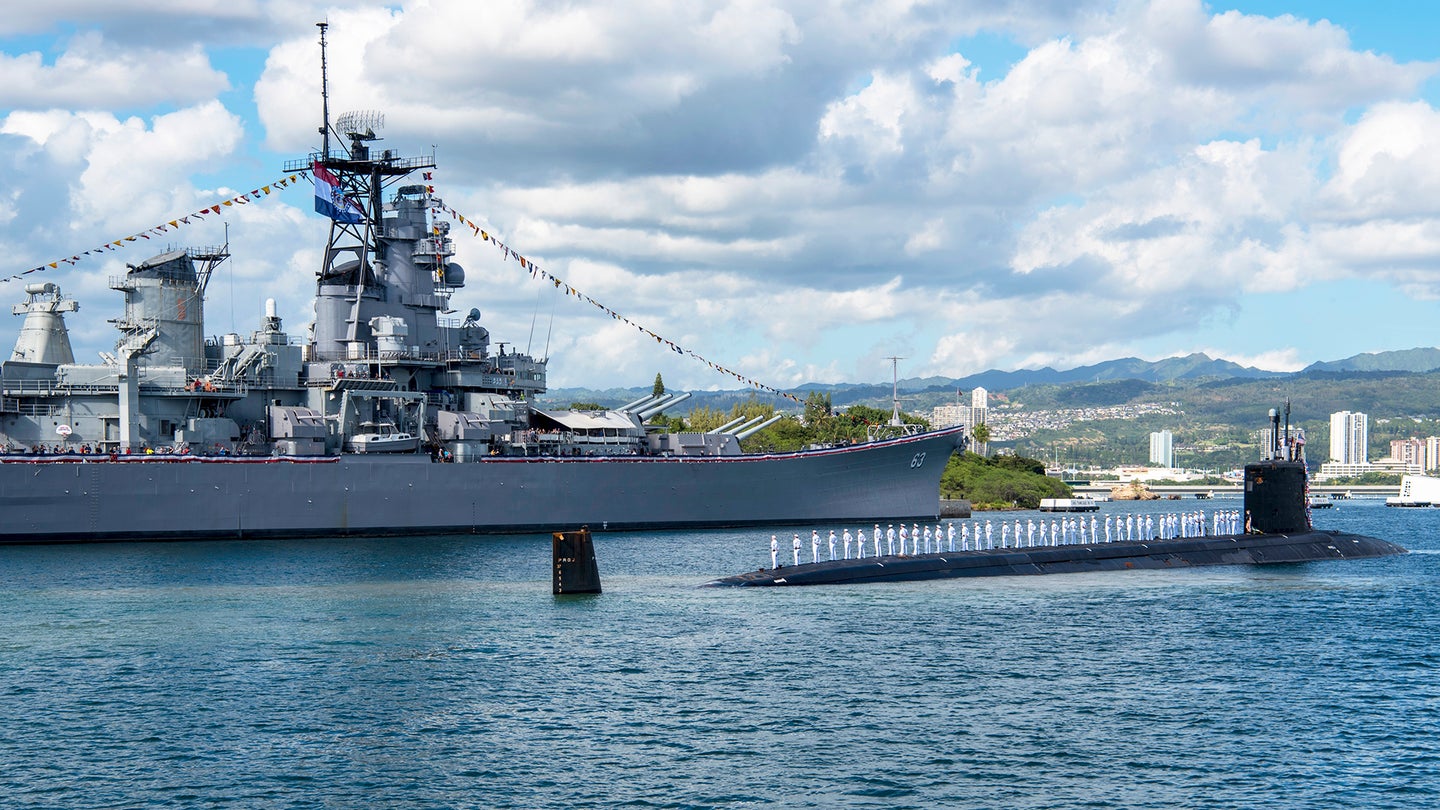 It was a unique moment in American naval history on January 26th, 2018 when the Virginia class fast attack nuclear submarine USS Missouri (SSN-780) arrived in its new homeport of Pearl Harbor, making its way past the famed, albeit retired USS Missouri (BB-63) battleship of the same name.

The battleship USS Missouri and the nuclear submarine USS Missouri couldn't be more different when it comes to warfighting vessels, but the rich heritage and lore that surrounds the name binds the two vessels together, in addition to their now common home. Just four American Navy vessels have been named after the 24th state, with a short-lived side-wheel frigate having been commissioned in 1842 and a Maine class battleship (BB-11) being commissioned in 1903 under the same moniker.

The Iowa class Battleship USS Missouri is by far the most famous of the lot, having participated in WWII, the Korean War, and the Gulf War. It also starred in the 1990s Steven Seagal action blockbuster Under Siege. Yet the vessel is probably best known for Japan's signing of the official instrument of surrender on its teak deck, a moment that marked the end of horrific World War II.

The submarine USS Missouri was commissioned in 2010 and was originally based out of Groton, Connecticut before the orders to mover her and her crew to Oahu came down. Packing up her 160 sailors and officers and their families and moving them thousands of miles away to an island in the Pacific is no small task, but it's hard to ask for a better station than gorgeous Hawaii's Pearl Harbor.

One thing the battleship and its nuclear submarine counterpart have in common is weaponry. The submarine USS Missouri's primary land attack weapon is the RGM-109 Tomahawk cruise missile. The battleship Missouri received Tomahawk capability during her final refit in the 1980s via the installation of armored box launchers on her deck. At 01:40 am on January 17th, 1991 the ship fired its first Tomahawk in anger at Iraqi targets, followed by 27 additional missiles over the next five days. Desert Storm would also see the Missouri and her sister-ship the Wisconsin pull off the largest naval feint in decades with their mighty 16 inch guns.

Although there have been calls for the Navy to bring back these hulking antique vessels over the last two and a half decades, doing so would be a major undertaking and the cost would be massive. Even Donald Trump mentioned the idea while campaigning for President in 2016. A new crop of proponents for bringing back the Iowa class has emerged in recent years, with many basing their reasoning on the fact that modern surface combatants are vulnerable to anti-ship missile damage and potential cyber attacks.

Considering the Navy's dumbed-down DDG-1000 Zumwalt class stealth destroyers won't receive the ammo originally designed for their 155mm deck guns, and just three of these vessels have been ordered, there still isn't an operational capability to satisfy the naval gunfire support requirement—which was lost when the Iowa class was put into mothballs in the early 1990s.

Regardless of the great battleship and naval gunfire support debate, the arrival of the submarine USS Missouri, which like its forbearer goes by the nickname of "The Mighty Mo," at Naval Base Pearl Harbor resulted in one hell of a photo opportunity. The vessel's sailors were decked out in their white uniforms as the submarine quietly passed by its namesake and the USS Arizona Memorial.

USS Missouri will now take up her place in Submarine Squadron One, and is the sixth Virginia class fast attack boat stationed at Pearl Harbor.  Judging by current events, the submarine and her crew will extremely busy in the months and years to come as the Pacific increasingly becomes the strategic focus of America's military.