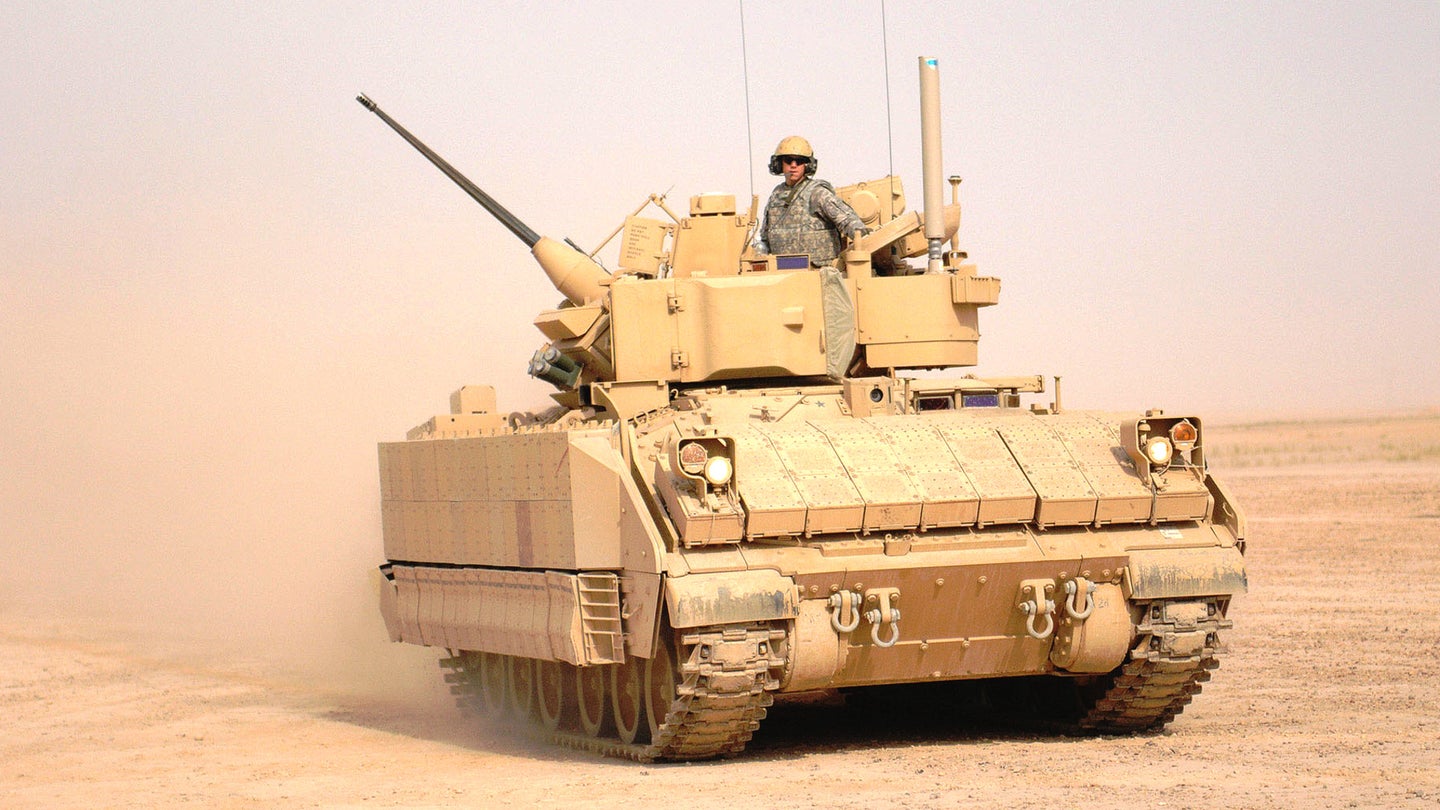 The U.S. Army is in the process of upgrading its Bradley Fighting Vehicles to give them the power necessary to run new networked communications and other systems, as well as make sure they remain just as capable despite the growing weight thanks to new equipment and other upgraded gear. At the same time, the service is already looking at new proposals for even more dramatic changes to the fleet, including a larger hull, new weapons, and additional sensors.

Shephard got the scoop on the Army’s plans and detail the various configurations they are considering for a notional M2A5 Bradley Infantry Fighting Vehicle on Jan. 29, 2018. The goal is to have a first unit equipped with the revised armored vehicles by the beginning of 2026. At present, the service already has approximately $600 million with which to fund both development and the initial purchases of the upgrade components, but this could increase as the Pentagon looks to significant grow its budgets across the board in the 2019 fiscal cycle.

According to Shephard, the proposals Army officials are considering at present fall into two main categories, a focus on the vehicle’s hull or more emphasis on its turret. The service already has to budget to pursue either option, but a new hull would reportedly take approximately four and half years to develop, versus a full five years to craft a new turret.

The Army has already spent tens of millions of dollars working with the Bradley’s present manufacturer, BAE Systems, on a pair of sequential improvements, known as Engineering Change Proposals, or ECPs, since 2012. The service will designate vehicles that receive those modifications as the M2A4. The M2A5 appears to take the place of previous plans for a third ECP package.

Based on the concept art, the proposal for a new hull involves stretching the length of the vehicle, but without needing to extend the tracks or add in a seventh wheel on either side. With this added room, the vehicles would be able to carry eight troops instead of seven.

Though primarily intended to transport and fight alongside dismounted infantry, the Bradley’s original design infamously sacrificed space for troops in favor of other weapons and equipment. Adding in space for an additional soldier is therefore significant, but still wouldn’t be big enough for the service’s otherwise standard infantry squad, which has 9 individuals.

The expanded hull will also provide space for even more add-on armor and defensive countermeasures, which could include active protection systems to shoot down incoming rockets and anti-tank missiles. Information Shephard obtained indicates that the Army believes this will allow them to install between twice and five times as much protection for the crew and other occupants.

These added defenses would undoubtedly help better protect the vehicles against improvised explosive devices and various man-portable anti-tank weapons, which have steadily proliferated among insurgents and terrorists, particularly in the Middle East. However, it would also make the vehicles more able to take on conventional foes, including potential near-peer enemies such as Russia and China, who are fielding increasingly more capable anti-armor weapons and armored vehicles, among other emerging capabilities, as well.

Since 2014, when Russia seized control of Ukraine’s Crimea region and began actively supporting separatists fighting the government in Kiev, the U.S. military as a whole has steadily reoriented its posture toward preparing for those more traditional conflicts. For the Army, this has meant a renaissance of sorts for armored vehicles, such as the Bradley, and renewed emphasis on their capabilities in a high-intensity scenario.

The proposal for a new hull would actually be able to leverage significant work BAE Systems had already done on its Armored Multi-Purpose Vehicle (AMPV) for the Army, which is essentially a turretless Bradley, as well as its experience with the abortive Ground Combat Vehicle (GCV), which it derived from the vehicle’s design. The Army cancelled the latter program after the approximate weight of the proposed prototype spiraled out of control to some 84 tons, more than an M1 Abrams tank.

The expanded hull would reportedly keep the weight of the chassis under 40 tons. However, this would still be significantly heavier than a standard M2A3 Bradley, which tips the scales at around 33 tons, including its turret.

The Army has already begun to mitigate this issue somewhat through the earlier ECP program, though. The first of those design changes includes track, suspension, and transmission upgrades already necessary to make sure existing Bradleys didn’t lose mobility or become significantly more maintenance intensive under the weight of a host of other more minor upgrades.

Those included explosive reactive armor suites, devices to jam and otherwise counter improvised explosive devices, and other self-protection and defensive measures, together known as the Bradley Urban Survival Kit, or BUSK.  The driving force behind those additions had been experiences learned during the U.S.-led occupation of Iraq between 2003 and 2008, when American troops routinely patrolled urban areas where insurgents and terrorists would often use the environment to their advantage to engage armored vehicles with anti-tank weapons at close range or hide roadside bombs.

The new hull would also feature the auxiliary power unit the Army is planning to add to the M2A4 Bradleys, which will provide the power necessary for new networked communications gear, additional sensors, and other equipment. The service says this extra power gives the design future growth potential, as well. It may also allow for the running of critical crew support and mission systems without having the main engine running, which could be beneficial for certain missions.

The pitch for a new turret might result in a less dramatic change to the overall size and shape of the vehicle, but would be no less significant in terms of the upgrade in capability. The biggest difference from the existing arrangement would be the replacement of the 25mm M242 Bushmaster cannon with the larger 30mm XM813 Bushmaster II from Orbital ATK. There is no mention of any plans to modify or replace the TOW missile launcher on the side of the turret.

The Army is already adding this new gun to a number of Stryker 8x8 wheeled armored vehicles, a configuration known as the Dragoon, to give them more firepower against emerging threats, especially the kind of light armored vehicles that near-peer countries such as Russia and China field in large numbers. The XM813 is a version of the U.S. Navy’s Mk 44 variant of the Bushmaster II and the U.S. Air Force also uses another type, the GAU-23/A, on its AC-130W and AC-130J gunships.

The commonality makes it a particularly attractive option from a logistical standpoint, as the services could order spare parts in bulk together.  However, some ammunition would remain distinct between the variants, which serve different functions against different target sets and have to work in different environments.

The new turret would have room for 180 30mm rounds at the ready, compared to the 300 rounds now available for the M242 in existing Bradleys. There would also be space for a new Ethernet connection to feed networked information into the gunner’s targeting system and the commander’s various displays.

Those two individuals would continue to ride in the turret as they do now. There is no mention of any plans for an unmanned turret, which could reduce the crew size and offer more protection since the remaining personnel would be situated in the better protected hull.

The Army would blend together either course of action with other upgrades it already has planned for the Bradley fleet as follow-ons to the ECP program. These include the improved Ethernet connection for networked data transfer throughout the vehicle, as well as upgraded networked communication systems to send and receive information from other sources. Updated laser aiming and ranging finding devices and color daylight and infrared cameras are in the works, as well.

There is also talk of adding a “5.56mm Suppression Weapon,” according to Shephard, but it’s not clear what this necessarily is in reference to specifically. From that rudimentary description, it sounds like a system to help protect the vehicle against small groups of hostile individuals, particularly in a close quarters fight, such as combat in an urban area.

Such a system could just include a remote weapon station with an existing 5.56mm machine gun, such as the Army’s standard M249 Squad Automatic Weapon, or it could consist of a much more involved arrangement. Another more extreme possibility could involve a weapon such as the XM214 Microgun, a six-barrel rotary machine gun based on the iconic Minigun, but chambered in the smaller round. General Dynamics, which purchased the rights from General Electric, no longer offers that gun on its website, though, and other similar designs appear to be more of a novelty than a serious weapon.

This bullet point could also just be a stand in concept for a more general suppressive capability or just be a reference to an existing, but obscure weapon based on the M16 rifle that troops can shoot from within the Bradley through two firing ports at the rear of the vehicle. The Army could also decide that an active protection system provides the same measure of defense against close-in threats.

The Army may ultimately decide to pursue both courses of action in sequence or simultaneously, providing it secured the funds to do so. There is otherwise the potential for new weapons and other equipment to end up on the Army’s wishlist for the Bradleys on top of the existing proposals as time goes on, much as has been the case with the ECP program and subsequent plans for the M2A5 already.

It is possible that the A4 or A5 upgrades could make their way on to other Bradley variants beyond the M2, as well. The Army already plans to adopt an M7A4 Bradley Fire Support Team Vehicle, or BFIST, a type of vehicle the Army has specifically configured to provide armored transport for individuals spotting for friendly artillery and other fire support missions. The updates, especially the added power generation, could be especially useful for a future Short Range Air Defense (SHORAD) version, which the service is also considering as a successor the now retired M6 Linebacker anti-aircraft variant.

It might not be as difficult to imagine the Army embarking on a more ambitious upgrade program as it once was, given President Donald Trump and his administration’s continuing plans to expand the defense budget. Earlier in January 2018, Defense Secretary James Mattis also released a new National Defense Strategy that re-emphasized conflicts against conventional opponents, and potential near-peer adversaries in particular.

The future of the Bradley might not be guaranteed then either. In 2017, the Army gave a $237 million dollar contract to a team with defense contractor SAIC in the lead to develop two prototype designs for a possible Next Generation Combat Vehicle (NGCV), which is still very much in the conceptual stage, as a possibly Bradley replacement. On Jan. 29, 2018, Secretary of the Army Mark Esper said that he would be willing to consider existing foreign armored vehicles for such a program, as well.

“Many of our NATO allies have very capable tanks,” Esper told reporters during a press conference at the Army’s top headquarters in Europe, situated in Wiesbaden, Germany, according to Defense News. “As I think about a next-generation combat vehicle, we should look at our allies, and look at their designs, and look at how they’ve built combat vehicles and combat systems, and think about adopting some of those.”

In the meantime, though, the service is very seriously considering just how much more capability it can squeeze out of its existing Bradleys.