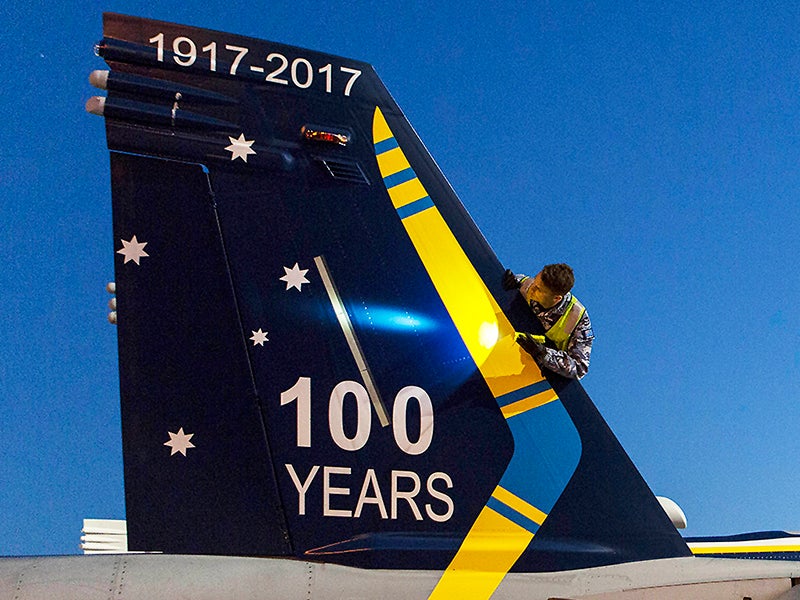 So far we've only seen a couple very grainy and far-off photos of the Royal Australian Air Force EA-18G Growler that slid off the runway and burst into flames during takeoff on Saturday morning from Nellis AFB, but now a more detailed image has emerged. The photo gives us the first decently clear view of the damage done to the aircraft as a result of the incident.

Australianaviation.com.au has posted a photo of the aircraft's right side showing severe scorching as well as airframe damage to the EA-18G, making the possibility that the jet will fly again increasingly in doubt. Although precise conclusions are hard to draw from just one image, it looks as if the right engine had an uncontained fire that may have burned the aircraft's empennage from the inside out.

It remains unclear what exactly happened that caused the thankfully non-fatal event, but reports of a major engine failure and/or fire fairly late in the Growler's takeoff run persist. If this was the case, we still don't know if an explosive, or uncontained engine fire incident occurred on the runway itself, or after as a result of the aircraft ingesting foreign object debris (FOD) once it veered off the runway.

The possibility of FOD ingestion on takeoff is possible, especially at Nellis during a Red Flag exercise where the operating areas are especially active with combat aircraft that migrate to the base from around the world, like the doomed Growler from No. 6 squadron which normally calls RAAF Base Amberley home. You can read all about this particular iteration of Red Flag, which is larger in size than the usual affair and leverages unique electronic warfare elements, including GPS jamming, in our our exclusive post on it linked here.

The Nellis airfield operations team keeps a very close eye on the base's runways especially during Red Flag, but all it takes is one piece of an aircraft or munition to find its way onto one of Nellis's two 10,000 foot long runways to become a potential problem.

There still isn't any official word yet on what happened or how extensive the damage to the Growler is. As we noted in our initial post on the mishap, Growlers are low-density, high-value assets for the RAAF, but there may be alternative means of replacing the scarred jet aside from buying a new one outright:

"A total of 12 EA-18G Growlers are intended to fill-out Royal Australian Air Force ranks as the country works to become a preeminent electronic warfare power. As such, the loss of just one aircraft is a fairly big deal. It's important to note that aircraft can be replaced, but the lives of its highly trained crew cannot.

In this case it's hard to tell if the jet will fly again, but at least parts of it could reenter the RAAF's F/A-18F and EA-18G logistics ecosystem. Luckily the RAAF ordered the second lot of F/A-18F Super Hornets with wiring installed that would allow the aircraft to be converted to the Growler configuration later on. So the RAAF will have an option aside from forking over nearly $70M for a new EA-18G."

We will update this post throughout the day as more information becomes available.