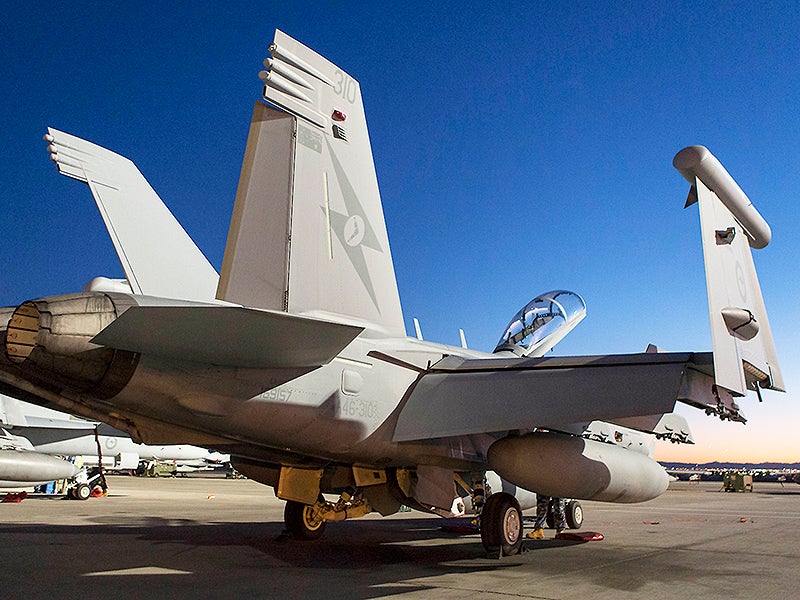 Details about the mishap are still emerging but we do know that an EA-18G Growler belonging to the Australian Air Force—the only other operator of the type in the world aside from the U.S. Navy—aborted a takeoff out of Nellis Air Force Base at roughly 10:45Am this morning and ended up skidding off the runway. Substantial damage was done to the aircraft, but thankfully the pilot and the electronic warfare officer were able to manually egress from the cockpit safely. In other words, nobody ejected and both crew climbed out of the jet where it came to rest without major injuries. A cloud of black smoke was seen from far away, which was from the fire that ensued.

The Australian Growlers are deployed to Nellis for Red Flag 18-1, which has been officially underway since Friday, although large scale launches and recoveries usually don't occur on the weekends. This rendition of Red Flag is exceptionally large and only includes America's closest allies with a large focus on electronic warfare and advanced networking and intelligence sharing capabilities. Most notably, large-scale GPS jamming will be used for the event, a story which The War Zone broke yesterday. The jamming will impact GPS service for aircraft as far away from Nevada as Colorado.

Australia has sent four Growlers from No. 6 Squadron, an E-7A Wedgetail airborne early warning and control aircraft, and an AP-3C Orion, along with 340 Royal Australian Air Force personnel to take take part in the exercise. The U.S. Navy also has EA-18Gs deployed to Nellis AFB for the drills as well.

Pictures of the stricken jet are making their way around social media, which show the aircraft largely intact and upright, but with severe charring from its wings back, including damage to the ALQ-99 electronic warfare pods beneath its wings. A total of 12 EA-18G Growlers are intended to fill-out Royal Australian Air Force ranks as the country works to become a preeminent electronic warfare power. As such, the loss of just one aircraft is a fairly big deal. It's important to note that aircraft can be replaced, but the lives of its highly trained crew cannot.

In this case it's hard to tell if the jet will fly again, but at least parts of it could reenter the RAAF's F/A-18F and EA-18G logistics ecosystem. Luckily the RAAF ordered the second lot of F/A-18F Super Hornets with wiring installed that would allow the aircraft to be converted to the Growler configuration later on. So the RAAF will have an option aside from forking over nearly $70M for a new EA-18G.

Red Flag 18-1 is slated to run through the 16th of February.

We will update this post over the next 24 hours as more information becomes available.