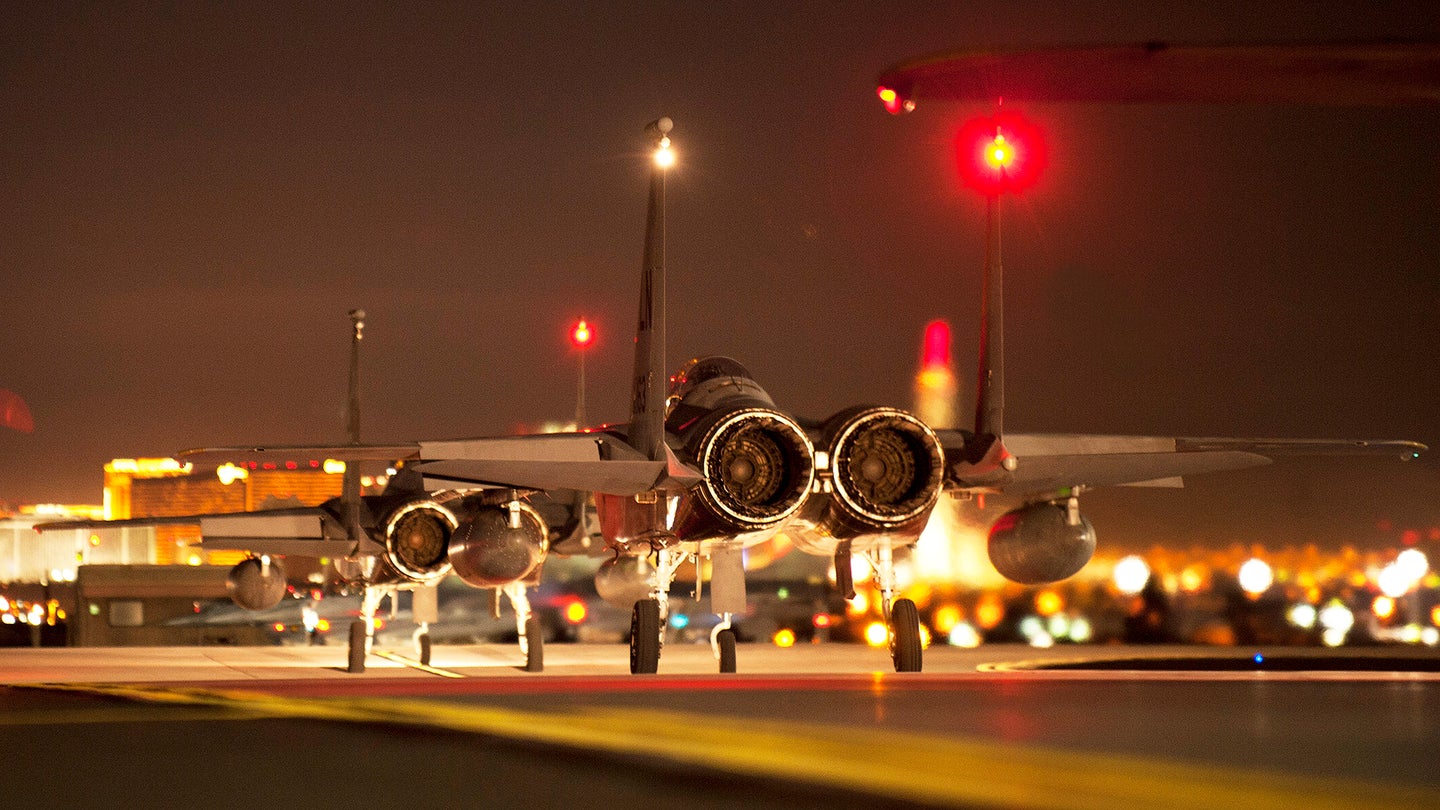 The year's first iteration of the USAF's premier set of aerial war games, known commonly as Red Flag, is kicking off today at Nellis Air Force Base just outside of Las Vegas, but this exercise will be different than any in the past. Not only is it the largest of its kind in the exercise's 42 year history, but the USAF is going to blackout GPS over the sprawling Nevada Test and Training Range to challenge aircrews and their weaponry under realistic fighting conditions. The tactic will spill over throughout the region, with warnings being posted stating inconsistent GPS service could be experienced by aircrews flying throughout the western United States.

The disruptions will begin on January 26th and will run through February 16th. Flying.com reports:

Arrivals and departures from airports within the Las Vegas area may be issued non-Rnav re-routes with the possibility of increased traffic disruption near LAS requiring airborne re-routes to the south and east of the affected area. Aircraft operating in Los Angeles (ZLA) center airspace may experience navigational disruption, including suspension of Descend-via and Climb-via procedures. Non-Rnav SIDs and STARs may be issued within ZLA airspace in the event of increased navigational disruption. Crews should expect the possibility of airborne mile-in-trail and departure mile-in-trail traffic management initiatives."

Those dates and the location perfectly correspond with Red Flag 18-1. The timeframe for the daily disruptions is also the same as the night launch and recovery period for Red Flag this time of year. Two major large force employment missions take place every day during the exercise, one during the light and one during the night, with each last roughly two to three hours.

This particular Red Flag includes players from the USAF, USMC, Australia and UK. The very limited guest list of only America's most trusted allies is indicative of a Red Flag exercise where high-end and sensitive capabilities will be put to the test. According to a press release from the USAF that was posted just hours ago, this seems to be an accurate assumption, with Colonel Michael Mathes, 414th Combat Training Squadron commander, stating:

“We’re trying a few new and different things with Red Flag 18-1... It’s the largest Red Flag ever with the largest number of participants, highlighting the balance of training efficiency with mission effectiveness... Red Flag 18-1 primarily is a strike package focused training venue that we integrate at a command and control level in support of joint task force operations... It’s a lot of words to say that we integrate every capability we can into strike operations that are flown out of Nellis Air Force Base.”

GPS denial is a becoming a huge issue for American military planners. Peer states, especially Russia, are already putting GPS spoofing and jamming tactics to work during various training events near their own borders. We have discussed this situation in great depth before, and I would suggest you read this article to understand just how deeply the loss of reliable global positioning system data can mean for the U.S. and its allies during a time of war, as well as what is being done to overcome such a monumental hurdle.

The Pentagon has mysteriously tested technology that can jam GPS over a wide area before, and it is likely that this same capability will be put to use in the Nellis Test and Training Range for this Red Flag 18-1. Line-of-sight and distance impact the way in which GPS users, especially other airplanes, operating far outside the training area will be affected. Here is an article on those tests, which emanated from Naval Air Weapons Station China Lake, which is located on the western edge of the Mojave Desert in California, in June of 2016. Below is a released image showing how line-of-sight impacts the jammer's abilities:

The fact that the Department of Defense is going to execute wide-spread GPS jamming operations during such a high-end exercise is more proof of just how big of a threat these emerging electronic warfare tactics pose. It will be interesting to see if the USAF admits that the technology was indeed used for Red Flag after the exercise concludes, but considering that there are a whole number of position, navigation, and timing (PNT) technologies being developed in hopes to help overcome the loss of GPS during combat, advisories like this one that occur during major military exercises will likely become increasingly normal in the years to come.