German defense conglomerate Rheinmetall says it latest active protection system for tanks and other armored vehicles, which protects military vehicles against various types of incoming projectiles, has become the first anywhere in the world to pass a stringent independent safety evaluation. The hope is that this will help allay potential customers’ fears that these types of defenses might pose significant risks to friendly troops and innocent bystanders.

Earlier in January 2018, ADS GmbH, a Rheinmetall subsidiary, announced that independent defense auditor TMS had declared that its APS-Gen3 defense system met the International Electrotechnical Commission’s IEC 61508 standard for functional safety. The firm plans to submit the active protection system for additional tests later in the year to certify it meets that standard’s Safety Integrity Level 3, the second highest rating, which means the equipment’s chance of failing to function properly is at least 1 in 1,000.

"Functional safety is not about whether a system is working well in its field and delivering an expected performance,” Dr. Ronald Meixner, a lead engineer at ADS, said in a press release Rheinmetall published on Jan. 23, 2018. “It’s about whether it is safe for all of us to use such system – as operator or as any human being which simply happens to be nearby.”

Car companies use the same guidelines for air bags, but often accept just hitting Level 2, where the system in question only has to work at least 99 out of 100 times on average. The fourth level of reliability, a failure rate of 1 in 10,000 or better, is generally reserved for especially critical equipment, such as nuclear reactors.

Reliability is an important consideration in any weapon or other piece of military, but particularly so with regards to active protection systems. By definition, these defenses have to detect an incoming projectile and launch a countermeasure of some type, often with only a fraction of a second before it actually hits the vehicle.

The APS-Gen3 is a “hard-kill” type system, which means it is set up to physically destroy the hostile anti-tank missile or rocket. The ADS system does this with small, focused explosive. The system is scalable, consisting of a number of sensor and countermeasure sets fitted around the outside of any tank or other vehicle. Each charge is good for blasting one incoming round.

The rest of the system includes short-range radars and electro-optical sensors, plus the necessary electronic components to link everything together. The radars detect the missile or rocket as it approaches the vehicle and the cameras spot it milliseconds before impact, triggering the explosive countermeasure at exactly the right moment.

Other types of active defenses, such as Israel’s Trophy, which the U.S. Army is buying for its M1 Abrams tanks, use a similar combination of sensors cued to launchers that are essentially large shotguns. These then neutralize incoming missiles or rockets with a burst of metal balls.

The APS-Gen3 actually has a lot in common with older explosive reactive armor suites, that array blocks of explosives around the hull of armored vehicles. In this case, the charges are set up to simply detonate when they get hit by a threatening projectile.

But it’s exactly these methods of operation that have long presented hurdles to more widespread adoption of both explosive reactive armor and more modern hard kill active protection systems. Covering armored vehicles with charges or other systems that could be lethal 30 to 40 feet away makes them inherently more dangerous to nearby friendly dismounted troops and innocent bystanders caught in the crossfire.

Both are especially significant concerns during operations in urban environments or other areas that bring the vehicles closer to potential threats, which are the exact situations where vehicle crews would want an active defense system. Unfortunately, these are the same scenarios where supporting dismounted infantry are equally crucial and where vehicles are more likely to be in close proximity to civilians. First generation active protection systems, such as the Soviet Drozd, were infamously hazardous to friend and foe alike and that perception has persisted to a degree of such defenses in general.

The video below shows the Drozd in action, with a slow-motion clip of the interceptor blasting a recoilless rifle round at 0:50 in the run time, which gives a good sense of just how dangerous the system could have been to any troops close by.

“In the West, we have to take care of things that the Russians don’t worry about quite as much,” Geoff Revill, a Rheinmetall spokesperson told Breaking Defense earlier in January 2018. “We care about our blue [friendly] forces, we care about civilians in an urban environment.”

At the same time, though, both nation states and non-state actors are increasingly fielding more modern anti-tank guided missiles, such as the American TOW, the Iranian Toophan derivative, and the Russian Kornet, among many others. The have been similarly steady improvements in unguided, shoulder-fired

So, there is a clear demand for new defensive countermeasures and ADS and Rheinmetall say that their system is safer than competing types of hard kill active protection systems available. The APS-Gen3 focuses its already limited blast almost straight down, which helps keep the explosion and any shrapnel directed away from troops or civilians near the vehicle. The system is modular, though, and components can be fitted where necessary to protect vital areas, including the tops of tanks and other armored vehicles. Its not clear how safe an upward directed blast might be for anyone close by.

The independent certification is supposed to indicate that its particular combination of sensors is less likely to accidentally trigger the charges, as well. According to Breaking Defense, before securing the IEC 61508 rating, engineers tried to fool the system with blasts of water, flying piles of dead leaves, and white phosphorus smoke grenades, none of which generated a false positive. The water test was reportedly at the request of an unnamed Southeast Asian customer concerned about what might happen to vehicles with the APS-Gen3 during the monsoon season.

In addition, ADS bolted one of the radars from its active protection system to the side of the building and left it out in the open for three years. In that time, it never inadvertently registered a passing bird or other object as an incoming threat.

But it’s still not clear whether the safety evaluation or the systems’ other features would necessarily be the deciding factor for potential customers one way or another. As noted, the U.S. Army, one major potential customer, is already purchasing Trophy, which has a proven combat record and boasts multiple intercepts during the 2014 Israeli intervention in the Gaza strip without any accidental detonations.

Senior U.S. Army leaders have also made it clear the bigger issue they’re facing is trying to convince troops that active protection works in general. “There has to be a level of trust in whatever it is that you're trying [to use] to displace that passive armor,” U.S. Army Lieutenant General John Murray, Deputy Chief of Staff for Resource Management, said at a gathering with industry representatives in March 2017.

A system like the APS-Gen3, which waits until the last moment to counter an incoming missile or rocket with a very precise charge with a potentially limited engagement envelope, might not inspire that level of confidence, no matter how reliable it is overall. And once those explosives detonate, whether they destroy the threat or not, the system effectively becomes dead weight until technicians can install new countermeasures.

Combining various different types of defenses could provide vehicles with a more robust defense, something the U.S. Army is looking into as part of its Modular Active Protection System (MAPS) program. It's not entirely clear what such a system might look like, but one immediate possibility would be combining a hard kill active protection system such as Trophy with explosive reactive armor.

Regardless, an arrangement involving multiple defensive countermeasures would come at the cost of more weight and bulk. Any such configuration including the APS-Gen3 would also render its safety certifications moot as it would only be one part of a larger whole.

That being said, for any country that is worried that existing active defenses pose too much of a risk of friendly fire and collateral damage, the German system does now boast an impressive set of credentials. The availability of a “safer” system might be enough to convince a military that had previously written off active protection to consider it now.

In addition, these could prove to be important selling points for countries, especially in Western Europe, where there is increasing public concerns about any weapon system that acts in an autonomous and semi-autonomous manner. Active protection systems have presented a complicated gray area for advocates calling for a total ban on so-called "lethal autonomous weapons."

“We understand that this automated weaponry, it’s scary stuff,” Rheinmetall spokesperson Revill said. “It’s absolutely needed, but to be the guy that makes the decision to deploy it, the confidence levels have to rise significantly.”

The German conglomerate clearly believes its APS-Gen3 will be able to ease potential customers’ fears about active protection. 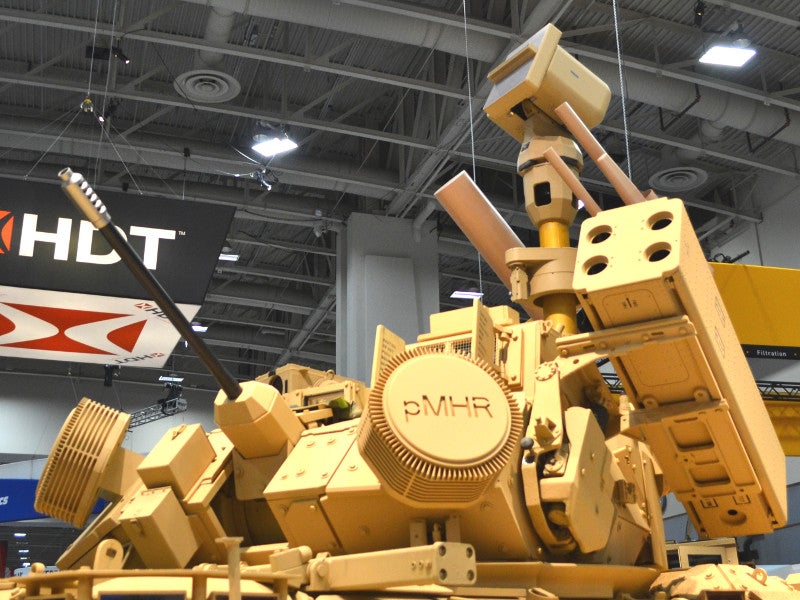 Companies from around the world showed off armored vehicles, weapons, and other equipment at the annual gathering. 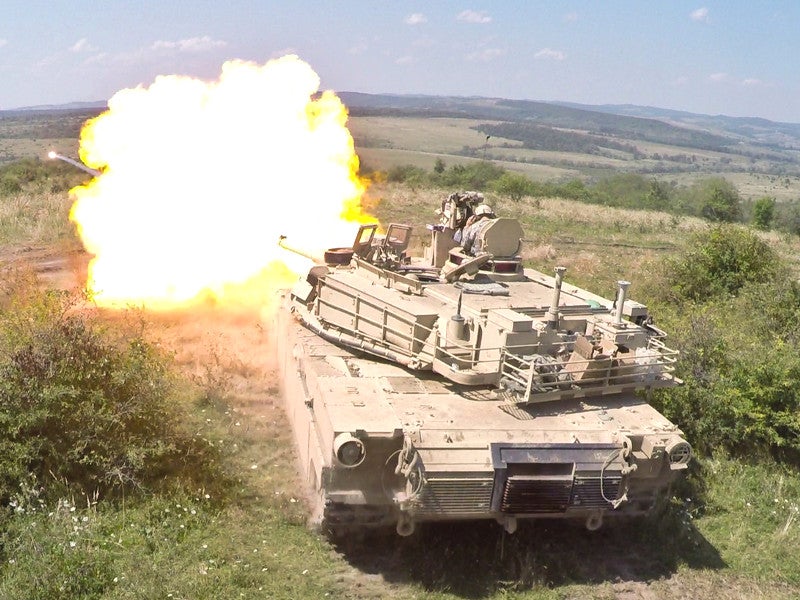