Turkey Launched An Offensive Against Kurds in Northwestern Syria, Here's Why It Matters 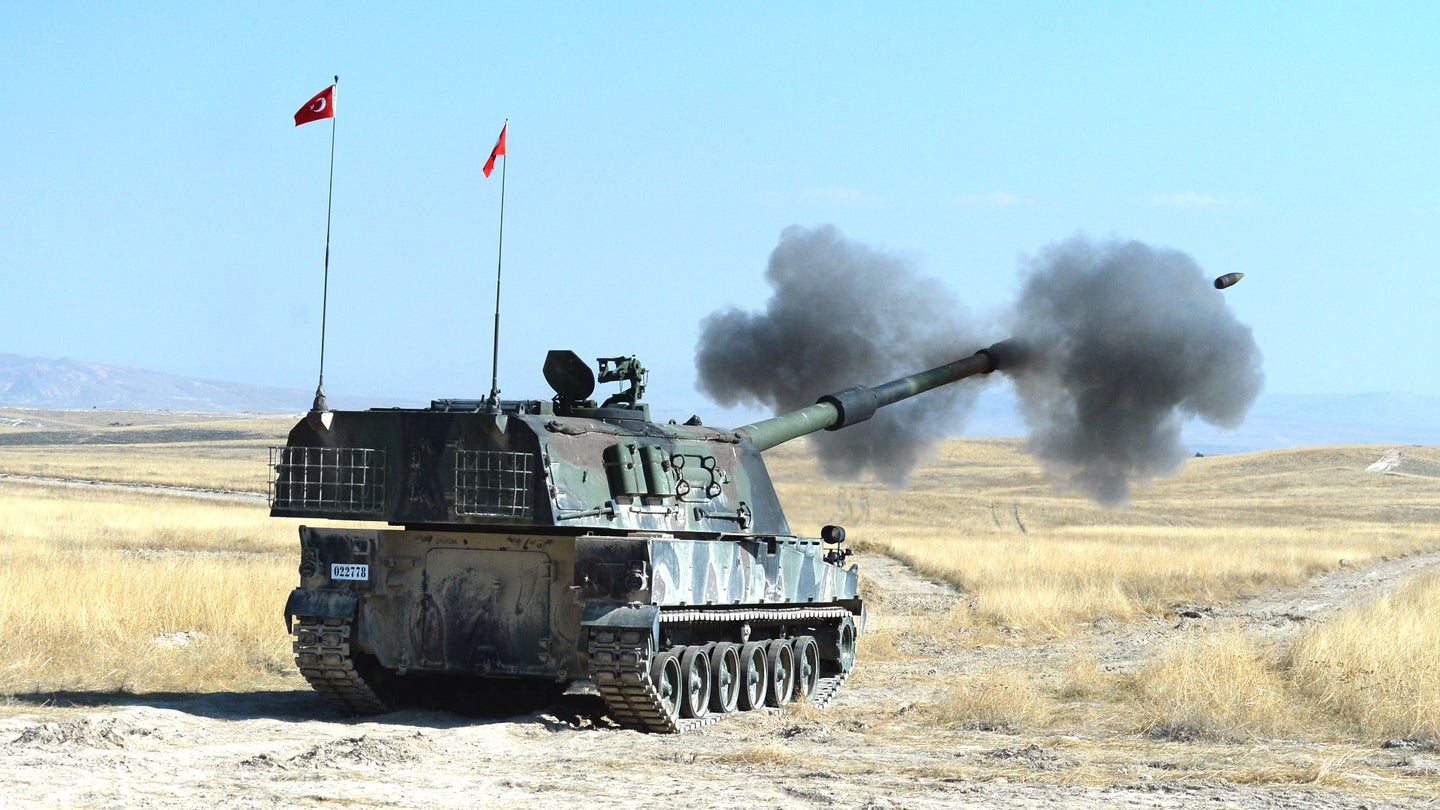 Turkey says it has effectively kicked off an offensive to destroy Kurdish forces in and around the far northwestern Syrian city of Afrin with an artillery bombardment, after deciding against air strikes in the face of Syrian threats. It is the latest indication that the conflict in the country is evolving rapidly as the threat of ISIS terrorists has steadily dissipated. There is now the potential for a dangerous three-way standoff between the Turks, the United States, and Syria’s dictator Bashar Al Assad and his Russian and Iranian benefactors.

On Jan. 19, 2018, Turkish artillery shelled areas in and around Afrin under the control of the Kurdish People’s Protection Units, also known by the acronym YPG. The government in Ankara says this group is simply an extension of the Kurdish Workers’ Party, or PKK, an organization that it and other countries have designated as terrorists. Turkey had previously said it would conduct air strikes, but apparently held off after Syrian authorities threatened to shoot the planes down. In 2012, Syrian forces did actually shoot down a Turkish F-4 Phantom II fighter jet, claiming it had violated their air space.

“The operation has actually de facto started with cross-border shelling,” Turkish Defense Minister Nurettin Canikli said, according to Reuters. “All terror networks and elements in northern Syria will be eliminated. There is no other way.”

At present, the major players in and around Afrin are the YPG, Turkmen and Arab members of the Turkish-backed Free Syrian Army, and forces aligned with the Assad regime, including elements of the Russian military. The canton forms a pocket that is physically separated from the main areas of YPG control further to the east, which is also where the U.S. military is situated in the country. The map below gives a good sense of just how isolated Afrin is from the rest of Kurdish-controlled territory.

Canikli stressed that Turkey had not yet deployed any ground forces into the Afrin area. There were separate reports that buses carrying Turkmen and Arab members of the Turkish-backed Free Syrian Army, or TFSA, had crossed the border into areas east of the city.

It's close enough that Turkish artillery can shell YPG positions from within the country, though. Videos quickly appeared on social media showing Turkey's T-155 Firtina 155mm self-propelled howitzers in particularly firing rounds across the border.

Turkish troops may soon join the fighting directly, though. On Jan. 17, 2017, Turkish officials had made clear they were gearing up for a larger operation against the YPG in the Afrin canton and subsequently sent tanks and other armored vehicles and troops to their side of the border.

Also on Jan. 17, 2017, the PKK released a video, seen below, that it claimed show its fighters destroying a Turkish S-70 helicopter as it sat at a remote mountain top outpost with an anti-tank guided missile, an increasingly common insurgent tactic. A separate clip from the Turkish personnel at the site, also shown below, later confirmed that the Black Hawk had actually dodged the attack and escaped unharmed.

The “YPG is ready to confront Turkish troops and FSA terrorists,” the Kurdish group said in a statement, according to Reuters. “If they dare to attack, we are ready to bury them one by one in Afrin.”

The Kurdish group also released video and imagery of reinforcements heading toward Afrin from the area in and around city of Manbij farther to the east, showing them in convoys that included armed pickup trucks and improvised armored vehicles, as well as armored personnel carriers and self-propelled anti-aircraft artillery they had apparently captured previously from Syrian forces. Notably, the columns also included Humvees, IAG Guardians, and Lenco Bearcats, all of which would almost certainly have come from the United States or other members of the international coalition fighting ISIS by way of the Syrian Democratic Forces (SDF), of which the Syrian Kurds make up the majority.

The immediate impetus for Turkey’s intervention was the U.S. government's announcement that it would continue to support the the SDF in Eastern Syria indefinitely. The United States says it is doing so in order to prevent ISIS terrorists from regrouping, stem growing Iranian influence, and provide the security necessary for the success of the internationally-backed, but largely stalled peace process to end the Syrian civil war.

“U.S. disengagement from Syria would provide Iran the opportunity to further strengthen its position in Syria,” U.S. Secretary of State Rex Tillerson said on Jan. 17, 2018. “Additionally, a total withdrawal of U.S. personnel at this time would restore Assad and continue his brutal treatment of his own people.”

Turkey has long opposed the SDF in general, since the YPG makes up the bulk of the force. So, on Jan. 15, 2018, Turkish President Recep Tayyip Erdoğan had described the reported American plans to craft a 30,000-member “Syrian Border Security Force” for this long-term mission in Syria, with at least 15,000 members of the Kurdish group at its core, as giving legitimacy to a “terror army.” He said Turkey would “strangle it before it's even born.”

For its part, the U.S. government has continued to call on Turkey to remain focused on efforts to defeat ISIS terrorists. In his subsequent remarks, Tillerson also said the description of the proposed U.S.-backed Syrian force as being specifically for border security had been a misstatement. Regardless, the United States denies the YPG has a direct connection to the PKK or plans to seize Turkish territory.

In March 2017, U.S. special operations forces even deployed to Manbij in order to block a Turkish-backed push against the Kurdish group. American troops continue to help preserve the status quo in that part of Syria.

But there is a distinct possibility that whatever happens in the near term in Afrin could have a much more far-reaching impact on the conflict in Syria. This situation in the district is deeply intertwined with the wildly different goals of various other actors in the country and in the region. We at The War Zone have repeatedly noted that these competing agendas could only rise to the surface as ISIS ceased to be an imminent threat.

Turkey already appears to be using its complaints about what the United States is doing in Eastern Syria to achieve separate goals in the western portions of the country. The U.S. military does not actually operate in Afrin, at least publicly, per an agreement with the Russians, which created a formal boundary between the two countries’ respective military activities in the country to avoid any potentially dangerous misunderstandings.

There is no indication that the United States will come to the rescue of Kurdish forces in Afrin or that it would even necessarily continue to work with the YPG as part of the SDF if the political landscape in Syria changed significantly. The U.S. government notably stood by as Iraqi forces swiftly crushed Kurdish aspirations for an independent state in that country in October 2017.

Knowing that the United States would at least not deploy troops that far to the west in Syria due to its arrangement with Russia, the YPG in Afrin actually cut its own ceasefire deal with the Kremlin in August 2017. This put them under the umbrella of a Russian-managed “de-escalation zone,” which in turn kept Turkish-backed forces out of the area. Russia, along with Iran and Turkey, had agreed to create these safe areas earlier in the year to help consolidate their respective positions and present a more tangible obstacle to the United States and its partners.

A Turkish operation in Afrin immediately puts them at odds with the Russians and Iranians and threatens the basic integrity of the de-escalation zone plan. On Jan. 18, 2018, Turkey reportedly reached out to the other members of the triumvirate in order to secure their approval for air strikes, but it appears the parties haven’t reached an understanding yet. Then on Jan. 19, 2018, Russia said it was moving "observers" near Afrin, which could be an effort to dissuade the Turks from pushing ahead with a more significant ground operation.

At the same time, Assad remains wary of a formal Turkish presence in his country, given Ankara’s long-standing support for the TFSA, which seeks to overthrow his regime. This is almost certainly what prompted the Syrian government’s threat to shoot down Turkish warplanes over Afrin.

How this complex situation will play out from here is unclear. Turkey has steadily grown closer to Russia over its dispute with the United States and its support for the Kurds. President Erdoğan and other Turkish officials have toned down their rhetoric toward the Assad regime, as well, in the process.

Still, the relationships may be relatively fragile. Russia, which has had its own deadly skirmishes with Turkish and Turkish-backed forces in Syria in the past, initially blamed Turkey for not stopping an unprecedented mass drone attack on its forces in the country earlier in January 2018.

Unknown militants launched the unmanned aircraft from Syria’s Idlib governorate, which is part of a Turkish-managed de-escalation zone. In response, Turkey accused Russia and Iran of violating the spirit of the ceasefire plan by launching operations into Idlib.

Russia’s President Vladimir Putin subsequently backed away from those allegations, publicly stating that the Kremlin did not believe the Turks were responsible in any way for the drone attacks. Russian officials have still not said who they do believe was behind the incident, despite claiming to have killed them in an artillery strikes days later.

There are possible indications that Russia may be increasingly losing patience with Assad, as well. Russian officials notably sidelined the Syrian leader when Putin triumphantly visited the country in December 2017. There are now reports that the brutal dictator is piling up debts he can’t repay, infuriating both the Kremlin and Iran.

All of this could make an already complicated situation more complex if the fighting in Afrin expands. The YPG will almost certainly come into contact with Turkish-backed forces as they seek to reinforce their position with troops from further east. This in turn could force Turkey to expand the scope of the intervention immediately to support Free Syrian Army units that might come under attack.

Any Russian or Syria troops that end caught up in the crossfire might just engage Turkish or Turkish-support elements in self-defense. That in turn could easily escalate into more serious clashes before officials in either country can find a way to de-escalate the situation.

Authorities in Damascus or Ankara might have trouble reigning in their respective militia groups, too. Depending on their particular affiliations and allegiances, they might call in their own reinforcements, which could add even more disparate actors to the mix.

This is hardly idle speculation, either. We've already seen a number of similar potentially serious incidents develop rapidly in Syria just in the past year. In August 2017, U.S. special operators defended themselves against Turkish-backed rebel groups, who had launched an attack on the SDF fighters they were working with at the time.

Earlier 2017, other American forces and their Syrian partners in the country's southern desert near the Jordanian border similarly attacked pro-Assad Iranian-supported Shia militiamen who made a number of attempts to advance on their positions. U.S. combat aircraft shot down two Iranian drones during the incidents. The United States tried, but was unable to use of its emergency hotline with the Russians to get those irregular forces to stand down.

The situation now developing in Afrin perfectly encapsulates the complexities of the fighting in Syria and the ever present potential for dangerous miscalculations that could drag any number of parties into a broader conflict. However it plays it, it will have significant ramifications for Turkey and the local militias it supports, the United States and its Kurdish partners, and the Assad regime and its allies.