The Navy is still doling out punishments in relation to the mishaps involving the USS Fitzgerald and USS John S. McCain. 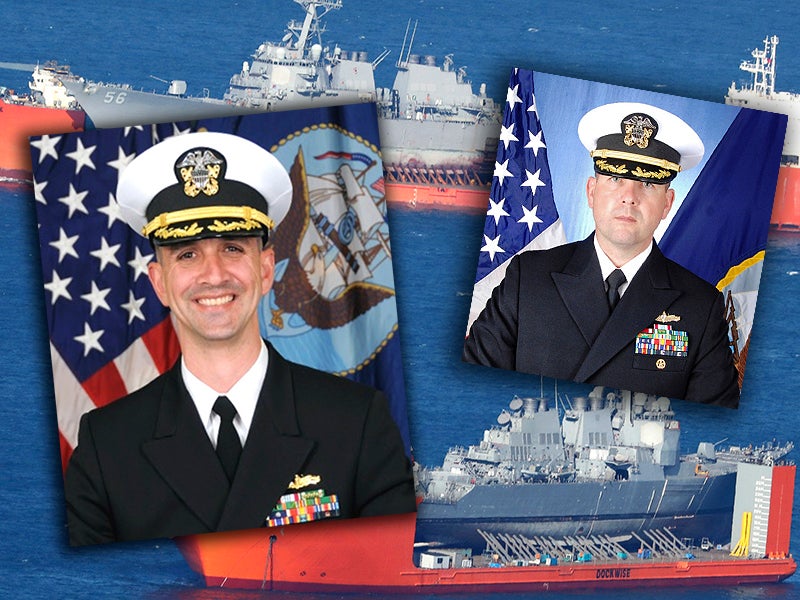 The US Navy says it will charge the former commanding officers of the Arleigh Burke-class destroyers USS Fitzgerald and USS John S. McCain with negligent homicide, among other charges, in relation to a pair of deadly collisions in 2017. Other individuals involved in those incidents face courts-martials and non-judicial punishments after a damning report concluded that serious breakdowns in leadership, along with other serious issues, were directly responsible for the mishaps.

USNI News was first to report on the charges against U.S. Navy Commanders Bryce Benson and Alfredo J. Sanchez, who were in charge of Fitzgerald and John McCain respectively, on Jan. 16, 2018. Both men face a number of charges that include negligent homicide and dereliction of duty, unnamed sources told USNI News. Navy leadership had already relieved the two officers of their commands after the mishaps.

In June 2017, Fitzgerald collided with the container ship M/V ACX Crystal off the coast of Japan. Then, in August 2017, McCain slammed into the chemical tanker M/V Alnic MC as it headed toward Singapore. The two incidents together resulted in the deaths of 17 sailors. A subsequent Navy investigation revealed officers, senior sailors, and watch standers aboard both ships had violated a host of rules and regulations and ignored basic seafaring conventions in the run up to the accidents. The report, which we at The War Zone previously analyzed in depth here, also highlighted poor training and readiness standards, dangerously low morale, and other systemic issues across the service.

An unnamed petty officer from the McCain will also face a charge of dereliction of duty and Benson and Sanchez are expected to have their preliminary hearings soon, according to USNI News. The Navy confirmed that there were pending charges, but would would not officially comment on them.

Other officers and sailors face non-judicial punishments, as well. In addition to firing the former commanding officers of the destroyers, the Navy has also relieved the head of the Destroyer Squadron 15, the commander of the Seventh Fleet's Task Force 70, and the Seventh Fleet's top officer. All of those organizations are forward deployed in Japan. The Navy also removed the head of Naval Surface Forces from his post ahead of his scheduled retirement and the commander of US Pacific Fleet will also separate from the service early.

The two deadly accidents, along with a string of other mishaps, has forced the Navy to do some serious soul searching in general. US Chief of Naval Operations Admiral John Richardson and Secretary of the Navy Richard Spencer will appear before the House Armed Services Committee on Jan. 18, 2018 to give a public report on two separate investigations into the service's readiness.

Both men will almost certainly face questions about how they plan to rectify the situation. In turn, the Navy's highest uniformed and civilian leaders are likely to raise concerns about continually uncertain budgets that make long term planning almost impossible. American legislators are already in the midst of tense negotiations on other issues ahead of a possible government shutdown on Jan. 20, 2018, when funds from the last the latest short-term spending bill, known as a continuing resolution, run out.

We will update you with more information regarding the charges and punishments against Navy personnel relating to the two 2017 collisions as it becomes available.

The US Navy's Chief of Information (Acting), Captain Greg Hicks, has now released an official statement on pending charges relating to the USS Fitzgerald and USS John S. McCain collisions, which is as follows:

"After careful deliberation, today Admiral Frank Caldwell announced that Uniform Code of Military Justice (UCMJ) charges are being preferred against individual service members in relation to the collisions.

"USS Fitzgerald: Courts-martial proceedings/Article 32 hearings are being convened to review evidence supporting possible criminal charges against Fitzgerald members. The members' ranks include one Commander (the Commanding Officer), two Lieutenants, and one Lieutenant Junior Grade. The charges include dereliction of duty, hazarding a vessel, and negligent homicide.

"USS John S. McCain: Additionally, for John S. McCain, one court- martial proceeding/Article 32 hearing is being convened to review evidence supporting possible criminal charges against one Commander (the Commanding Officer). The charges include dereliction of duty, hazarding a vessel, and negligent homicide. Also, one charge of dereliction of duty was preferred and is pending referral to a forum for a Chief Petty Officer.

"The announcement of an Article 32 hearing and referral to a court-martial is not intended to and does not reflect a determination of guilt or innocence related to any offenses. All individuals alleged to have committed misconduct are entitled to a presumption of innocence.

"Additional administrative actions are being conducted for members of both crews including non-judicial punishment for four Fitzgerald and four John S. McCain crewmembers.

"Information regarding further actions, if warranted, will be discussed at the appropriate time."