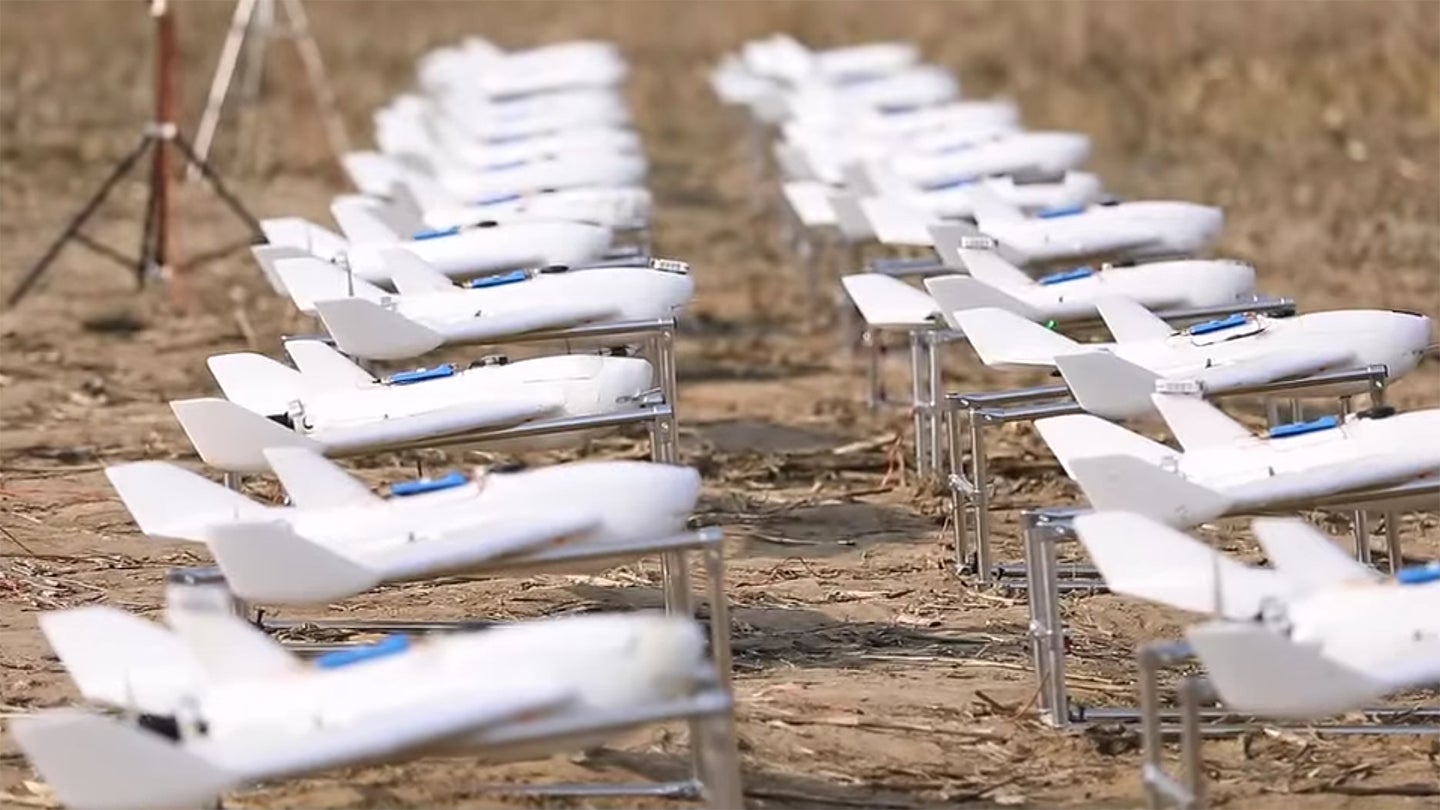 A mass drone attack on Russian forces in Syria has highlighted the very real danger that small unmanned aircraft increasingly pose, even in the hands of non-state groups. At the same time, it underscores how small drone swarms could be a game-changing capability for larger nation states, including the United States’ near-peer opponents, such as China, who are already developing this technology in more structured environments.

In December 2017, researchers from the Chinese state National University of Defense Technology (NUDT), more formally known as the People's Liberation Army (PLA) National University of Defense Science and Technology, conducted an experiment involving approximately two dozen of small fixed wing unmanned aircraft. An official PLA publication said that the test consisted of the entire group of drones acting as a swarm to complete a simulated reconnaissance mission, according to the East Pendulum blog. The individual aircraft operated together as a single entity and performed certain, unspecified portions of the flight autonomously.

“The team has been working for nine months on the preparation of this swarm test, sometimes we have to do a hundred test flights a day,” Professor Shen Lin Cheng, the Chair NUDT’s Institute of Artificial Intelligence Sciences and former head of its Institute of Electro-mechanical Engineering and Automation, said. “We have precise short, medium and long term objectives, which are consistent with those set by the government on the modernization of the Chinese armed forces by 2020, 2035 and 2050.”

The December 2017 flight test followed an earlier experiment two months earlier that involved an unknown, but reportedly smaller total number of drones. These two events may have also included a number of small quad-copter style unmanned aircraft, which NUDT has also been working with.

In June 2017, the state-owned China Electronics Technology Group Corporation, or CETC, conducted its own record-breaking swarm experiment with nearly 120 unmanned fixed wing aircraft, as well. This event included simulated missions where the entire formation acted as a whole and instances where smaller groups broke away to complete separate objectives.

The specific objectives of the NUDTs drone swarm experiments are unclear, as are those related to the CETC’s tests, but it seems almost certain that it is foundational research to see what small unmanned aircraft can and can’t do as a single entity within the limits of existing technology. The U.S. military is also engaged in a host of similar technology demonstration efforts regarding drone swarms.

The NUDT's latest experiment looks very similar in concept to the U.S. Department of Defense's Strategic Capabilities Office's tests with Perdix, a miniature air-dropped unmanned aircraft, and the U.S. Navy's Low-Cost UAV Swarming Technology project, which used Raytheon's Coyote, another small fixed-wing drone. Both of these efforts focused as much on the software, which allowed the swarms to respond in unison to commands and operate autonomously based on pre-programmed instructions, all while avoiding running into each other, as the hardware itself.

Small groups of networked drones could significantly change how military forces operate in the future. Our own Tyler Rogoway explained some potential scenarios in a feature last year on the need for new short-range air defenses, or SHORAD systems, writing:

"Imagine a world where somebody flies a couple hundred of those and flies one down the intake of my F-22s with just a small weapon on it."

“Actually, it would be even easier to just strike the jets as they sit idle and vulnerable on the flight line. One swarm could see a whole squadron of tightly packed fighters destroyed without even having a chance to fight back.”

The video below shows an earlier CETC drone swarm test in 2016.

Systems that are ostensibly for scientific research purposes, but that have sensors designed to monitor visual or other changes across a wide area could easily have military applications, too, acting as early warning nets or helping guard borders. According to East Pendulum, Chinese research agencies and institutions have published at least a dozen public studies regarding drones working in unison, including on land and at sea, as well as in the air, but not all for explicitly military applications. China is surely doing more work on the potential uses of drone swarms in more classified settings.

Whatever the goals and state of China’s drone swarms developments are, the potential threats are definitely real and rapidly evolving. Militants in Iraq and Syria, including ISIS, have already shown what they can do with limited resources and facilities. Between January and December 2017, these groups went from conducting very limited attacks using individual commercial type drones with improvised munitions to a mass attack using a home brew autonomous design with GPS guidance.

Writing about the incidents in Syria, Tyler Rogoway noted that we should expect more advanced nation states to produce even more threatening swarm technologies, writing:

“But regardless of the direct implications this new tactic has on Russia's Syrian operation, it does give us our first glimpses of a new age in modern warfare – one where dense swarms of low-cost drones armed with high-explosives will be able to wreak havoc on targets. Russian defenses, and those of other countries for that matter, may be able to fend off a handful of these improvised drones executing a very loosely coordinated attack, but a near peer-state competitor could field a much denser, more nimble, adaptable, and networked force. And as we have mentioned before, there is no known kinetic defense to counter such an attack.”

On top of that, future parallel developments in artificial intelligence could help intelligence analysts more readily parse large amounts of data from many individual sources, like from a localized swarm, making the prospect of distributed wide-area persistent monitoring, especially from the air, more manageable in general and speeding up the process of getting that information into the hands of the individuals who need it the most. The United States is already conducting tests of one such system to help U.S. military personnel sift through visual imagery.

Chinese authorities are reportedly turning the country’s western Xinjiang province into a dystopian laboratory to test even more extreme methods of artificial intelligence-driven intelligence collection and persistent monitoring in order to help maintain control. Members of the region’s predominantly Muslim Uighur population, a Turkic ethnic group, has often been critical of Han Chinese rule, either as peaceful activists or members of international terrorist groups.

The video below shows how China is harnessing artificial intelligence to rapidly sift through surveillance imagery.

And at least at present, all of this technology is evolving faster than countermeasures can keep up, too. Directional jammers and solid-state lasers, as well as other ultra-short range defenses, are generally best for disabling or destroying one target at a time rather than a whole group of small drones simultaneously. Omnidirectional jamming equipment could just as easily disable friendly tactical drones using the same frequencies or other communications and surveillance systems as the incoming enemy. As the Russians found out in Syria earlier in January 2018, a combination of traditional short-range air defense and electronic warfare systems is not enough to guarantee the destruction of all the drones in even a modestly sized swarm.

We at the War Zone have been warning about this emerging threat for some time, and Tyler Rogoway has posited on more than one occasion that the only defense against small swarms may be a friendly one, noting:

"Maybe wide-area electronic warfare could help counter such a threat, at least to some degree. But clearly the best defense of all is to not let the enemy get close enough to launch such an onslaught in the first place. But this is a tough proposition when it comes to defense from such an attack in friendly areas or behind the lines, where even the fastest fighter jets sit stationary on flightlines, the coordinates of which are readily available on Google Earth.

"Although it may sound like a page out a science fiction novel, the only thing that could probably counter such a dense swarming attack on ground forces or a garrisoned force would be for those forces to have their own counter-swarm swarms at the ready. This would result in dozens or even hundreds of mini kamikaze dogfights in the sky—a life and death suicide struggle among diminutive hive-minded flying robots."

Though the technology is still in an experimental stage, the Chinese military is clearly looking forward to a future full of deadly small drone swarms.