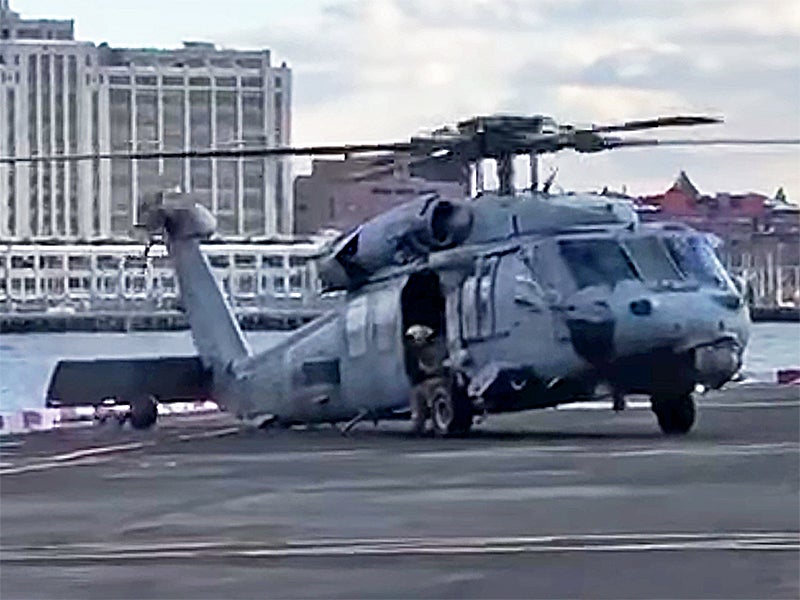 It's not exactly clear when the video was shot, although considering the snow in the background it was likely quite recently, but it depicts a US Navy MH-60S from HSC-9 "Tridents" taxiing after landing at the Wall Street Heliport in downtown Manhattan. As the helicopter moves toward the terminal it makes a tight right turn near the corner-edge of the operating area, with the helicopter's tailwheel impacting the perimeter barrier and shearing off. Thankfully, the Navy chopper plopped right down on its tail-boom and nobody was hurt with the helicopter remaining totally intact—minus its tailwheel.

The MH-60S, sometimes referred to as the Knighthawk, is a multi-role naval variant of the H-60/S-70 Black Hawk family of helicopters that carries out a variety of roles largely centered around the utility mission-set. These include vertical replenishment, general logistics, search and rescue/combat search and rescue, special warfare support, and anti-surface warfare among other duties. It differs from its MH-60R stablemate somewhat dramatically as the "Romeo" is far more missionized and elaborately outfitted for its anti-submarine warfare mission set and the basic airframe differs physically in some small ways as well.

One of the most visible among them is the fact that MH-60S has a tailwheel—similar to the traditional UH-60 Black Hawk configuration—while the MH-60R, like its SH-60B forbearer, has a forward-mounted (by about a dozen feet), shock absorbing, twin wheel, rear landing gear setup. This configurations offers better deck-handling and more margin for error when landing on tight pads aboard surface combatants. In this case an MH-60R would have made that turn fine.

The Wall Street Heliport gets quite a few high-profile guests, including frequent visits from HMX-1's

As for the MH-60S crew, it's pretty safe to say that they probably wish they landed somewhere else on what ended up being a very rough day for them indeed.

This is a take from an experienced Army Black Hawk pilot who watched the video:

"That stuff happens but one thing I noticed is the crew chiefs, whose job it is to “clear” the aircraft left, right, up and down were not at the door gun stations (those windows are closed) but sitting Hollywood style on the cabin floor. It looks cool and feels cool to dangle your legs like you’re in Zero Dark Thirty but you can’t lean out far enough to clear the tail sitting there. Not to mention that rate of turn looks about twice as fast as normal. That was a simple turn that would have been prevented if the crew chiefs were just doing business as usual and not caught up in the fact that they were at arguably one of the coolest landing pads in the US."