Strapped for funds, the UK will let the ship go for less than a third of its original cost despite an extensive refit. 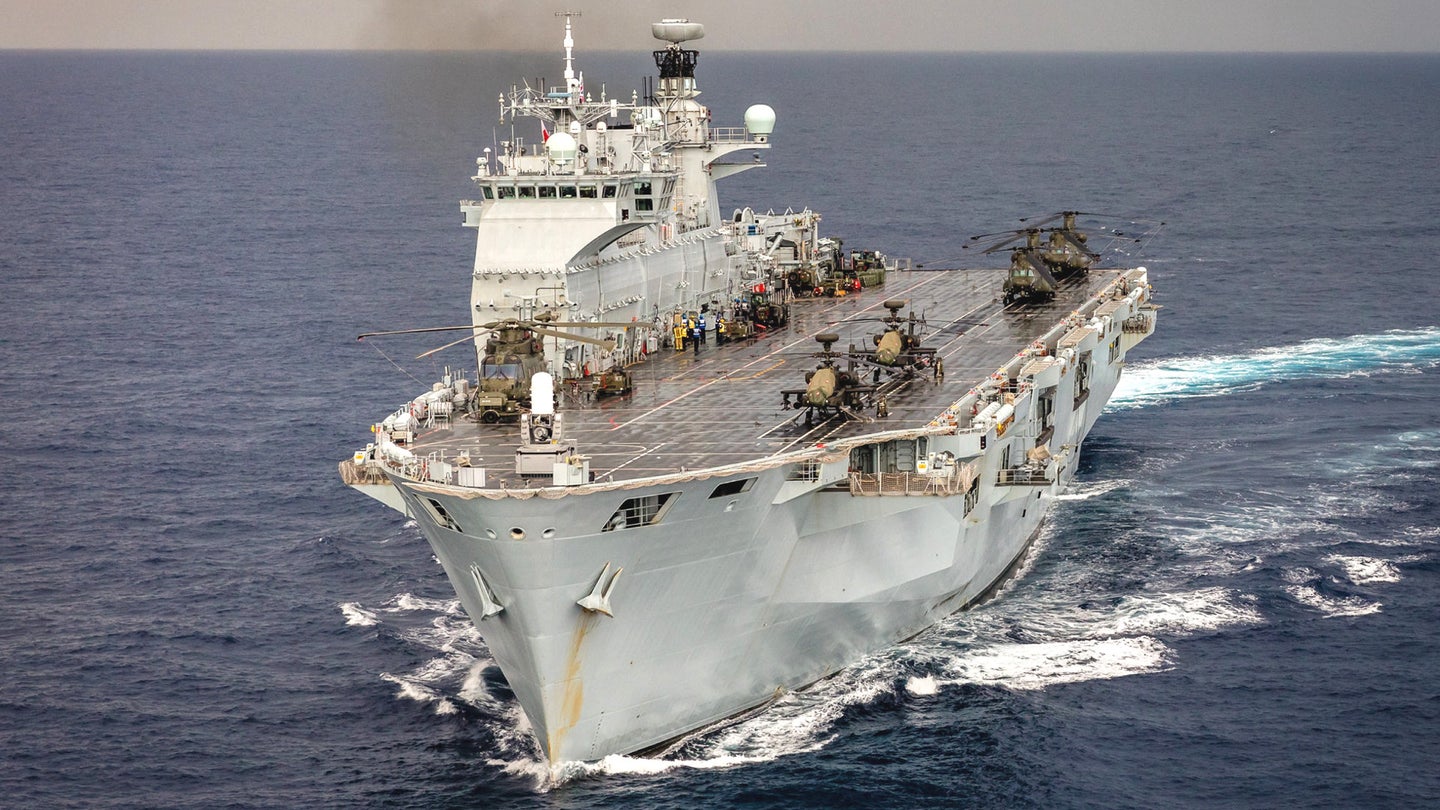 The United Kingdom has reportedly finalized the sale of the helicopter carrier HMS Ocean to Brazil for less than a third of what it originally spent to build the ship. The Brazilian Navy looks to be the big winner in the deal, which effectively ends the possibility of the Royal Navy having any interim aircraft carrier capability, no matter how limited, until HMS Queen Elizabeth enters operational service.

On Jan. 2, 2018, U.K. Defence Journal reported that Brazilian Defense Minister Raul Jungmann had confirmed the purchase in December 2017. Brazil will pay almost $115 million for Ocean, but it is unclear if that cost will include any refit or refurbishment of the ship or if the government in Brasilia will have to come up with the entire amount at once. The United Kingdom still has yet to officially decommission the ship, which it expects to do in 2018, but the first rumors of the sale appeared in March 2017.

The head of the Brazilian Navy, Admiral Eduardo Leal Ferreira, previously described the price tag as “convenient,” Brazilian journalist Roberto Lopes told U.K. Defence Journal. Brazil will send personnel to train on the ship in the United Kingdom prior to its delivery and the first four Brazilian officers will reportedly arrive before the end of January 2018.

It is not entirely clear how Brazil plans to integrate the ship into her existing naval forces. In February 2017, the country’s navy finally retired its sole conventional takeoff and landing aircraft carrier, the São Paulo, after five nearly five years of attempts to return it to service.

Ocean would not be able to accommodate the fixed wing aircraft that had flown from that ship, such as the modernized AF1 Skyhawks, though. According to Roberto Lopes, the Brazilian Navy is already planning on re-naming its new ship something other than São Paulo in order to keep that moniker free for a more capable future carrier.

Instead, the ex-British ship could become the new Minas Gerais. The last Brazilian ship of that name was an upgraded World War II-era Colossus-class light aircraft carrier that the country had purchased from the United Kingdom in 1956 and which served until São Paulo’s arrival in 2001.

But even without a compliment of fixed wing aircraft, though, the Ocean could provide important capabilities for Brazil at home and abroad. The country’s Navy could fly any of its existing Super Cougar and Super Puma transport helicopters, the former of which have light attack and will gain anti-ship capabilities, or Super Lynx and Seahawk anti-submarine helicopters from the ship’s deck. As such it could serve as a sub-hunting platform or in a broader sea control function, as well as being able to support humanitarian assistance operations in the aftermath of a natural disaster.

With the ability to carry small landing craft to get personnel and vehicles ashore even in the absence of established port facilities, it could also potentially support interventions or disaster relief operations throughout Latin America, the Caribbean, and even further abroad. As of 2018, Brazil was already an active contributor to nine different international peacekeeping operations and had been part of more than 50 such missions since the end of World War II.

Throughout her service with the Royal Navy, Ocean has already demonstrated her capabilities to perform this wide array of tasks, most recently arriving in the Caribbean to provide aid to British possessions after Hurricanes Irma and Maria.

These diverse capabilities in times of both war and peace have made helicopter carriers and amphibious assault type ships with similar flight decks increasingly popular around the world, especially among countries looking to expand their ability to project power and influence beyond their borders. On top of their more practical functions, this category of ships are often major symbols of national prestige and Ocean herself is presently the Royal Navy's flagship.

If nothing else Brazil gains a very flexible ship, which only entered Royal Navy service in 1993. The ship is less robust that other similar vessels, as it was made to commercial standards and could need significant overhaul before joining the Brazilian Navy. However, between 2013 and 2014, the United Kingdom put Ocean through significant refit that cost nearly $90 million.

The vessel originally cost less than $200 million – but more than $390 million today – meaning that Brazil will get the ship at less than a third of its original price tag. Admiral Ferreira’s assessment that the purchase would be “convenient” would seem to be generous to the British.

Of course, as we already noted, it’s not clear whether or not this includes any refit or if the ship will require new equipment after delivery. According to U.K. Defence Journal and Janes, the Brazilian Navy already expressed an interest in buying Ocean without its Phalanx Close-In Weapon System (CIWS) self-protection systems, which it does not otherwise operate on any other ship.

It is possible that Brazil could strip the short-range Simbad-RC surface-to-air missile systems, electronic support measures systems, and other equipment from the now decommissioned São Paulo. Simbad-RC, a twin launcher for the Mistral infrared-homing missile, would not offer a capability similar to that of CIWS, though, meaning the Brazilians might need to invest in additional defensive arrangements.

Whatever happens, the loss of Ocean will be significant for the Royal Navy, leaving it without an operational carrier capability of any kind as it waits for HMS Queen Elizabeth to reach initial operational capability. The United Kingdom doesn’t expect this to happen until at least 2021, in part due to slow pace of getting the F-35B Joint Strike Fighter into service. As such, the country’s new supercarrier will go to sea for her first patrol with at least some of her air wing made up of U.S. Marine Corps F-35Bs.

The U.K. Ministry of Defense doesn’t expect the ship to reach full operational capability with British F-35Bs until 2023, while her sister HMS Prince of Wales looks set to spend most of her time in port in reserve. The supercarrier could deploy early if absolutely necessary, but would almost certainly have to do so without any fixed wing aircraft, greatly limiting its ability to provide local air defense or strike capabilities.

In the meantime, the Royal Navy is also considering retiring its last two major amphibious warfare ships in order to free up both funds and personnel to man those carriers while it otherwise struggles to keep its dwindling surface fleet ready for actual operations. In December 2017, thanks to a confluence of factors, all but one of the Royal Navy’s destroyers and frigates were pierside.

As such, in the event of any future contingencies or disasters, such as Hurricanes Irma and Maria, and without HMS Albion and HMS Bulwark, the United Kingdom will have to rely entirely on ships the quasi-military Royal Fleet Auxiliary, primarily the three Bay-class landing ships, for amphibious support. These smaller ships are significantly less capable than Ocean both in terms of flight and well deck space.

It’s not clear when the United Kingdom’s economic situation might improve. The U.K. government has already faced severe budget cuts as it heads toward its departure from the European Union, commonly known as the British Exit or Brexit. In addition to a contracting domestic economy in response to the decision, the country’s leaders are struggling with the prospect of having to negotiate a slew new international trade deals independent of the regional bloc. There has even been talk of attempting to raise funds for a new royal yacht to aid in doing so, but through a national lottery scheme since there is no actual funding available for such a project.

If there is any silver lining to be had in the sale of Ocean for the Royal Navy, it might be that the ship’s CIWS and any other defensive systems might find their way on to Queen Elizabeth, which appears to be almost comically under-protected. The older helicopter carrier, which displaces approximately 22,000 tons, has three CIWS, along with four 30mm cannons to help beat back small boats and similar close-in threats. The new supercarrier, more than three times larger, has exactly the same number of both of these self-defense systems at present.

What seems clear is that Brazil is getting the base ship at an absolute steal and that the Royal Navy is still years away from having another operational aircraft carrier.