The graphic is disingenuous, but that doesn't mean that such a capability shouldn't be pursued. 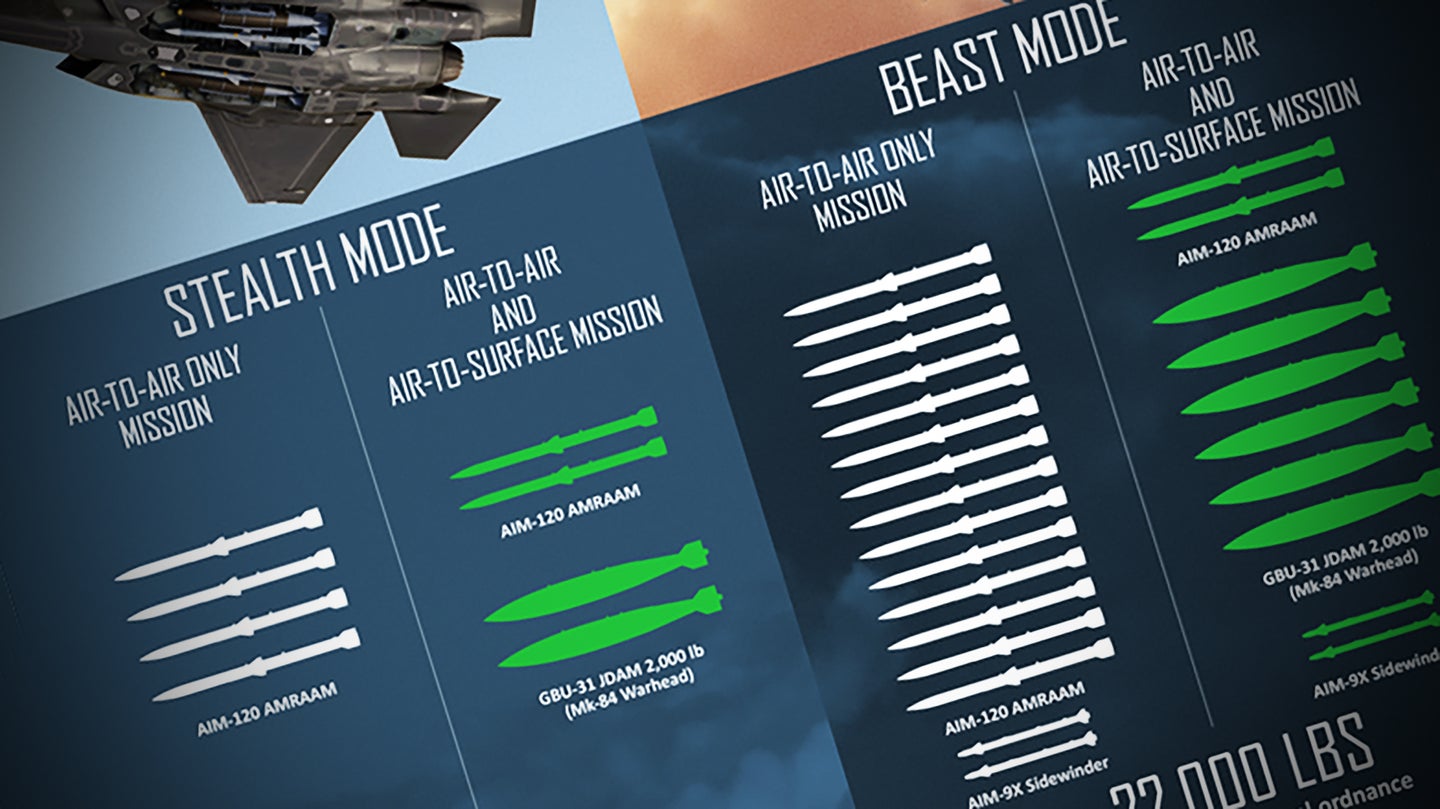 Not only has this configuration not been tested but as far as we can tell it isn't even slated for development anytime in the foreseeable future. The hardware to make it happen doesn't exist either. It is likely that it's one theoretical configuration that has been studied in the past that could possibly be included in future block developments at some time if the will, and especially the money, is present for doing so.

Usually these maximum load-out configurations don't matter much as they rarely if ever see operational use, but the F-35's ability to carry a lot of beyond visual range air-to-air missiles does matter. Beyond being able to carry large quantities of missiles for traditional combat air patrols, the idea that a tactical aircraft could operate as something of an arsenal ship for other tactical aircraft is becoming a very attractive capability set. Such a concept could potentially increase the magazine depth and effectiveness of stealthy fighter aircraft operating forward in the counter-air role. Boeing has touted their 2040C F-15 configuration that would be capable of this role and it could prove especially useful as long-range air-to-air missiles become a hot commodity once again. You can read more about this concept here and here.

Having a stealthy flight of F-35s call up missiles on demand from non-stealthy "beast mode" configured F-35s operating many miles behind them could be a huge force multiplier and would help overcome the F-35's wanting internal air-to-air missile carriage capability, which is limited to four missiles at this time. This is tentatively planned to be increased to six missiles at some point in time, but exactly when this would happen, and what it will cost remains unclear. Lockheed's notional 14 AMRAAM load-out likely includes this modification.

In the end the graphic is disingenuous, but at the same time it also is somewhat exciting and hints at the possibility of some pretty awesome cooperative F-35 tactics in the future—that is if these notional capabilities get funded. What's so puzzling is why exactly the F-35 team chose to embellish the aircraft's current capabilities just in the "beast mode" air-to-air portion of the graphic. They could have as easily showed other various future possible weapons configurations, including internal carriage of smaller hit-to-kill air-to-air missiles in stealth mode, or far more exotic and diverse air-to-ground load-outs than those available today or in the foreseeable future.

One potential answer to this question is that maybe they are trying and make it seem like the type can compete with non-stealthy advanced 4th generation fighters in the counter-air missile carrying capability realm—once again, an area that is becoming particularly attractive, especially to the Pentagon's air arms. And once again, this is also a capabilities set that Boeing, Lockheed's biggest fighter aircraft competitor, increasingly touts for its aircraft.

Little things like this are why trust in the F-35 program is so low. The Joint Project Office and the aircraft's prime manufacturer have a long history of making over simplified, misleading, absurdly positive, and not fully accurate statements and claims about the aircraft's capabilities, timeline, and cost. This only caused more trouble for the already troubled program. Instead, being open about the program, its issues, mistakes that were made, and what to expect in the future would have served the aircraft and its goals far better. If anything else this should be a lesson learned for future weapons development programs.

In this case, its puzzling why Lockheed wouldn't just say this is something that may be possible in the future instead of acting like it is a current capability. What it will take to realize this exciting capability is far more interesting and important than just putting it out there as a puzzling non-fact for people to decipher for themselves.

That being said, now that the USAF, USN, and USMC will end up with many hundreds of these fighters let's make the very best out of them, and making a notional F-35 air-to-air "arsenal ship" configuration a reality should be bumped up towards the top of the F-35's to do list.

A big thanks to our friend and Popular Mechanics scribe Kyle Mizokami for alerting us to the graphic's existence.