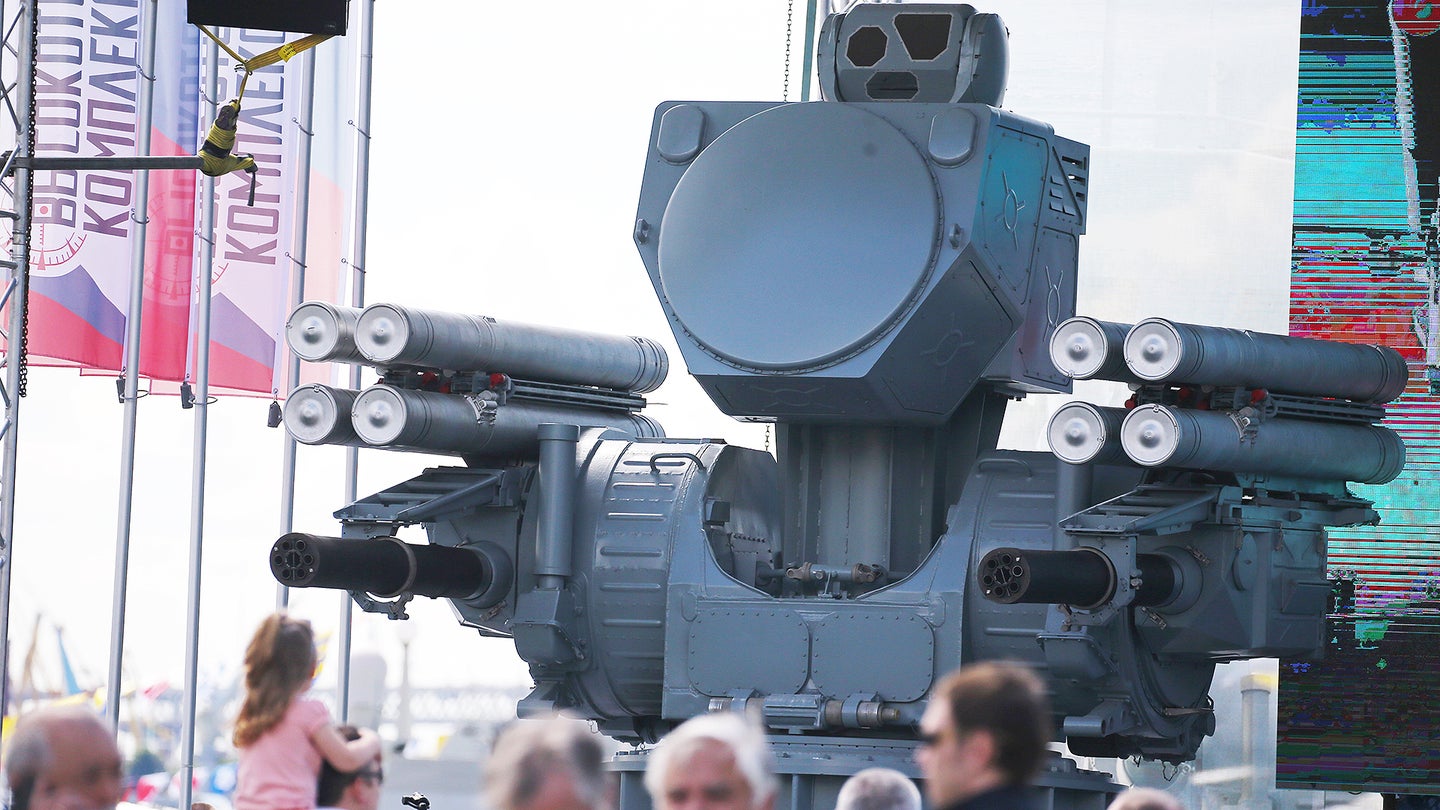 Russian media is reporting that the long awaited upgrade of the Kashtan (Chestnut) close-in weapon system (CIWS) will begin testing in 2018. Trials will start on a land range before moving to the sea aboard one of Russia's Project 1241 Molniya missile corvettes in the Black Sea. The country's new Project 22800 Karakurt corvettes will be the first vessels to receive the system operationally once testing is complete.

Panstir-ME appears to be something of a mix between the potent Pantsir-S1 land-mobile self-propelled anti-aircraft artillery gun system and existing Kashtan CIWS installations found on many Russian-built naval vessels dating back to the Cold War. It uses a modified version of the Pantsir's 1RS2-1E phased array radar system as well as an electro-optical/infrared targeting and identification system mounted above the radar in a similar fashion as seen on many of its ground-based cousins.

There is no early warning radar system directly attached to the Panstir-M mount, like the RS1-E1 mounted on many Pantsir-S1 vehicles. Instead, early warning will be provided by the ship's radar suite and/or by a similar detached early warning radar mounted elsewhere on the ship. The system's own radar can also provide early warning detection as well as fire control functions over a more limited sector of fire.

Its main armament includes a naval version of the Pantsir's 57E6-E surface-to-air missile. This is a two-stage missile that can hit targets (aircraft, cruise missiles, drones) from half a mile to ten miles away, and from just a number of feet above the surface up to nearly 30,000 feet. These missiles are carried in four tubes on each side of the turret, and like Kashtan, twin rotating magazines below deck can reload each side four times over automatically within a matter of seconds. 32 missiles in total are carried.

Pantsir-ME will also be able to fire the Hermes-K surface-to-surface missile. Presumably, these missiles would be outfitted on the Pantsir-ME when the vessel is operating in littoral areas where small boat swarming attacks are possible, or when nearby shore strikes are required. The Hermes-K can be outfitted with a semi-active laser seeker so that near over-the-horizon targets can be hit precisely if a forward operating unit—such a drone, aircraft, or special operations team—is lasing the target with a laser designator. Because of the system's unique twin-magazine configuration, a mix of both missiles could be carried operationally.

Pantsir-ME's other primary armament includes a pair of very hard hitting GSh-30K six-barrel 30mm rotary cannons that can spew up to 6,000 rounds a minute each. This high volume of fire can be used to shatter incoming anti-ship missiles, aircraft, drones, or small boats. These are the same cannons found on Kashtan, and they deviate from the land-based Pantsir-S1 design, which uses the lower rate of fire, twin barreled, 2A38M 30mm cannons.

The system can operate autonomously or it can be tied to a network of similar mounts scattered around a larger vessel. It can also be integrated into the ships larger overall combat system. This flexibility allows the system to be fielded on everything from corvettes, to frigates, to destroyers, to Kirov class battlecruisers. Russia's sole aircraft carrier, the Admiral Kuznetsov, is currently undergoing a refit that will supposedly include installing Pantsir-ME in place of its eight existing Kashtan-M CIWS systems.

According to Rostec CEO Sergey Chemezov each Pantsir-ME mount can engage four targets simultaneously, and will have a probability of kill three to four times greater than existing Kashtan-M installations.

Like Kashtan before it, the Pantsir-ME is unique in that it integrates both a highly-agile missile and a rapid-firing CIWS gun system into a single package, and features weapons redundancy on every mount. With a much needed refresh to its control interface, its sensors, and its missiles, Russia has executed on a fairly brilliant plan that will build on the Kashtan in a logical way while also using existing components to decrease costs and lower development and integration risk.

Altogether, this new system will allow Russia to maintain credible kinetic CIWS defenses into the coming decades as the Pantsir-ME will also likely benefit to some degree from upgrades made on its land-based counterpart.

Considering the new emphasis being put on anti-ship missile capabilities by Russia's potential foes—namely the U.S. and its allies—investing in updated CIWS definitely makes sense, especially as Russia works to rebuild their hulking Cold War-era navy into a more agile and technologically advanced force. And of course the fact that the first operational units will be installed on Project 22800 corvettes, one of Russia's ambitious naval projects that could lead to sales abroad, is also a sign that having a modern CIWS system is essential when it comes to realizing naval fighting ship export success.

Although Russia is somewhat of a world leader in short-range air defense (SHORAD) capabilities, the country is unlikely to be able to compete, at least initially, with Western high-power directed energy (laser) CIWS concepts that will be emerging in the coming decades. As a result, fielding the most capable and updated kinetic CIWS systems is likely to be an increasing focus for Russia's Navy going forward, and Pantsir-ME definitely delivers on that idea.

The system is slated for operational use in the 2019-2020 timeframe.