The Taiwanese Air Force is reportedly getting closer to accepting its first four updated F-16V Viper fighter jets, part of a critical upgrade project for the country’s fleet of older F-16A/B aircraft. That program is just one of a number of modernization efforts its air arm is pursuing as it struggles to keep pace with China’s People’s Liberation Army Air Force's developments, which include fifth generation stealth fighters, new missiles, and more.

On Dec. 26, 2017, Taiwanese outlet Up Media reported that the Aerospace Industrial Development Corporation (AIDC) had finished converting the initial four F-16Vs and that American test pilots had arrived to test the aircraft. Lockheed Martin, which developed the upgrade package, has been working together with the Taiwanese state-run aviation firm on the project. Flight testing is set to begin in 2018 and the full upgrade program is supposed to wrap up some time between 2022 and 2023.

Most significantly, though, the F-16Vs have an AN/APG-83 Scalable Agile Beam Radar (SABR), an active electronically scanned array type. This unit scans faster and is more precise at longer ranges than the AN/APG-66 mechanically-scanned types in the F-16A/B aircraft. Other air arms, including the U.S. Air Force, have already recognized that SABR on its own is a cost effective way to squeeze more capability out of older Viper types.

It is also worth noting that Taiwan was the first country to purchase the F-16V upgrade, although at the time of its origination it hadn't yet been given that designation by Lockheed Martin. This adaptable upgrade roadmap is becoming increasingly attractive to global F-16 operators.

When the U.S. approved the deal in 2011, there were also plans to deliver new jamming pods, targeting pods, and various new weapons, including the AIM-9X Sidewinder short-range air-to-air missile, the CBU-105 Sensor Fuzed Weapon

cluster bomb, and various laser and GPS precision guided munitions. The radar absorbent Have Glass II II surface treatment for the F-16 were also part of the deal.

Earlier in 2017, the United States approved another arms sale that could include AGM-88B High Speed Anti-Radiation Missiles (HARM) and AGM-154C Joint Stand Off Weapons (JSOW), both of which could also be important options for Taiwan’s F-16 fleet, helping them suppress enemy air defenses and giving them a stand-off strike capability during a conflict. Up Media added in its report that the first batch of AIM-9X missiles, which have more range, are more maneuverable, and have an improved seeker head capable of high off-boresight cueing via a helmet mounted display, would arrive in 2018.

All of this will be essential if Taiwan expects to have even a chance of holding its own with the Chinese military during a crisis. In September 2017, the People’s Liberation Army Air Force officially declared that the fifth generation J-20 stealth fighter had entered operational service. In addition, China is in the process of adding new capabilities to its own still very capable fourth generation Su-27 Flanker derivatives, as well as expanding its fleet of airborne early warning and electronic warfare aircraft, as well. A medium weight, less complex stealth fighter, the FC-31/J-31, is also deep in development.

At the same time, China has substantially increased its ground and sea arsenal, including the development of improved amphibious warfare capabilities, new long range ballistic missiles and other anti-access/area denial technologies that both present a challenge to Taiwanese forces and might delay or otherwise limit the ability of the United States to intervene in a crisis. In October 2017, Chinese premier Xi Jinping said would use any means necessary to "defeat" any Taiwanese bid for independence.

It remains unclear how many of Taiwan’s F-16A/B aircraft will actually go through the conversion process, though. When work began on the initial four planes this year, IHS Jane’s reported that AIDC was in the process of building facilities that could handle conversion work on up to 24 aircraft per year. If the project starts in earnest in 2018 and runs through the end of 2023, this would only account for approximately 120 of Taiwan’s more than 140 existing F-16s.

The saga of Taiwan’s efforts to either acquire newer F-16s or upgrade its existing aircraft has been going on for more than a decade already. In 2006, then U.S. President George W. Bush and his administration delayed approval of a Taiwanese request for F-16C/D aircraft, ostensibly because Taiwan’s political opposition had blocked the requisite funding.

However, many observers felt that this was actually an attempt to avoid further angering the government in Beijing, which considers Taiwan to be an integral part of its territory and does not recognize the authority of its nominally independent government. Though the United States officially has a “One China Policy” that recognizes only the People’s Republic of China with its capital in Beijing, it does reserves the right to sell weapons to Taipei under the Taiwan Relations Act, also known as Public Law 96-8.

Lockheed Martin actively pushed to let the sale of C/D aircraft proceed. In one 2010 briefing to U.S. Air Force officials, the defense contractor argued that without the deal it might have to shut down the Viper production line – something that has not come to pass – and that the United States might have no choice but to sell Taiwan F-35 Joint Strike Fighters to help it keep up with Chinese developments. The briefing also said that other American and western options would be difficult for Taiwan to obtain given those companies' commercial aviation deals to the Chinese government.

President Barack Obama and his administration eventually blocked the sale of the C/D aircraft entirely, offering the upgrade plan instead. President Donald Trump initially took an openly pro-Taiwan stance and has routinely criticized China and its business practices in particular.

This suggested the U.S. government might be more willing to expand and fast-track defense and security related deals under the Taiwan Relations Act. In June 2017, the Trump administration did approve $1.3 billion in new arms sales to Taiwan. However, Trump and his cabinet have since gone back and forth in their rhetoric and policies toward China, at times sanctioning entities in the country and lauding its government, as they seek to court the country’s help or otherwise goad it into helping contain an increasingly belligerent North Korea.

Taiwan’s defense budget and competing priorities within the country’s air force might also slow the F-16 upgrade project or curtail how many aircraft ultimately receive the updates. As of January 2017, The Diplomat reported that Taiwanese authorities had set aside less than $4 billion of the more than $5 billion that the United States had estimated the full package, including the associated weaponry, would cost.

It’s not entirely clear whether Taiwan’s F-16V upgrades include an overhaul of the basic airframe either, which could become necessary to further extend their overall service life. The U.S. Air Force is in the process of putting some of its older F-16C/D aircraft through a service life extension program and has already allotted a certain amount of the production of those components to support allies and partners through foreign military sales.

At the same time, the Taiwanese Air Force is also interested in upgrading its fleet of nearly 50 French-made Mirage 2000-5 fighter jets, which first entered service in the 1990s and have become increasingly accident prone. Taiwan and France have been in discussions about the scope and cost of such an update package since June 2017, which could include extending the life of the associated Mica and Magic 2 air-to-air missiles.

According to Defense News, Taiwanese legislators are withholding any funding for the upgrades until they receive a formal written report with more details. Seperately, Taiwan is suing France to recover bribes officials had paid during the course of the initial Mirage 2000 purchase. In 2010, the government in Taipei won a similar suit over kickbacks relating to its French-made Lafayette-class frigates.

Taiwan’s President Tsai Ing-wen, who the Chinese government sees as a strong advocate for the island becoming an independent nation, is pushing for less reliance on foreign arms imports, too. This might further prompt a shift in resources from upgrading existing aircraft to developing new, indigenous types.

“In the current phase, we are committed to building our own military jets and submarines, which, particularly for young engineers and researchers, will create many new job opportunities,” Tsai said in October 2017. “I trust that a more robust defense industry will not only strengthen our military capabilities, but prove beneficial to our overall industrial development as well.”

But the development cycle for even a new fourth generation jet could be long and expensive for Taiwan and even more so in the island's case given the political sensitivities and restrictions foreign firms face when dealing with the government in Taipei. These factors almost certainly preclude the country from even considering partnering with an outside contractor to develop a true fifth generation capability and have so far kept it out of the U.S.-led Joint Strike Fighter program.

In the 1980s, Lockheed Martin did help Taiwan in its earlier effort to develop the so-called Indigenous Defense Fighter, also known as the F-CK-1 or Ching-kuo, after the U.S. government blocked sales of Northrop F-20 Tigersharks and F-16s. It did so within the limits of American export laws, though, and the company itself has since derided the design as the “best aircraft the U.S. State Department ever designed.”

Earlier in December 2017, AIDC did finish the second phase of upgrades to those fighters. The F-CK-1C/D Hsiang Sheng variants including an all-new glass cockpit and updated electronic warfare capabilities, among other improvements. The country dropped more extensive plans to add low-observable features to the design, as well as extend its range with conformal fuel tanks, but is now in the process of developing new indigenous air-to-air and stand-off cruise missiles to go along with those upgraded aircraft.

As such, upgrade programs like the F-16V project are still likely to offer Taiwan the fastest and most cost effective means to expanding the capabilities of its air force in the near future. With China surging ahead in its own defense developments, Taiwanese authorities cannot realistically afford to wait for a domestic fighter if they expect to maintain any sort of deterrent to a potential Chinese military intervention on the island. 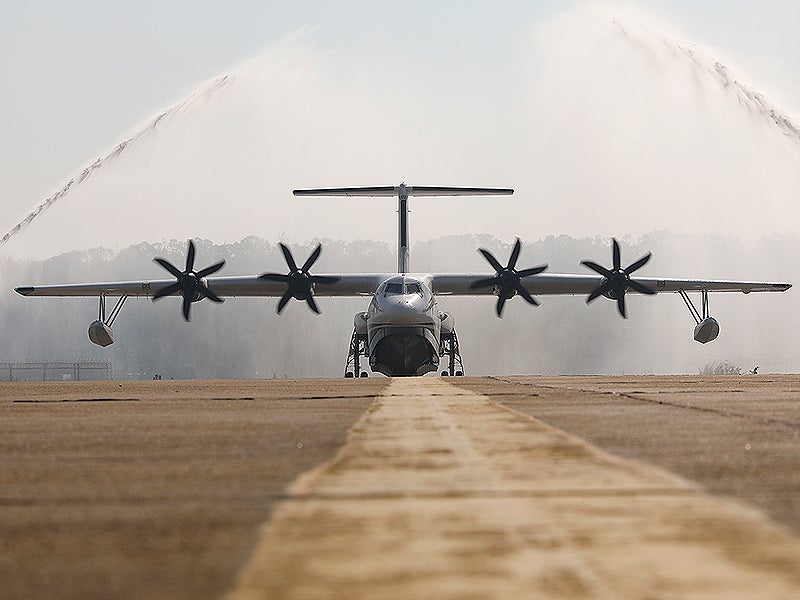