The Ministry of Defense seems to have skimped on the carriers' ability to fend off anti-ship cruise missile barrages. 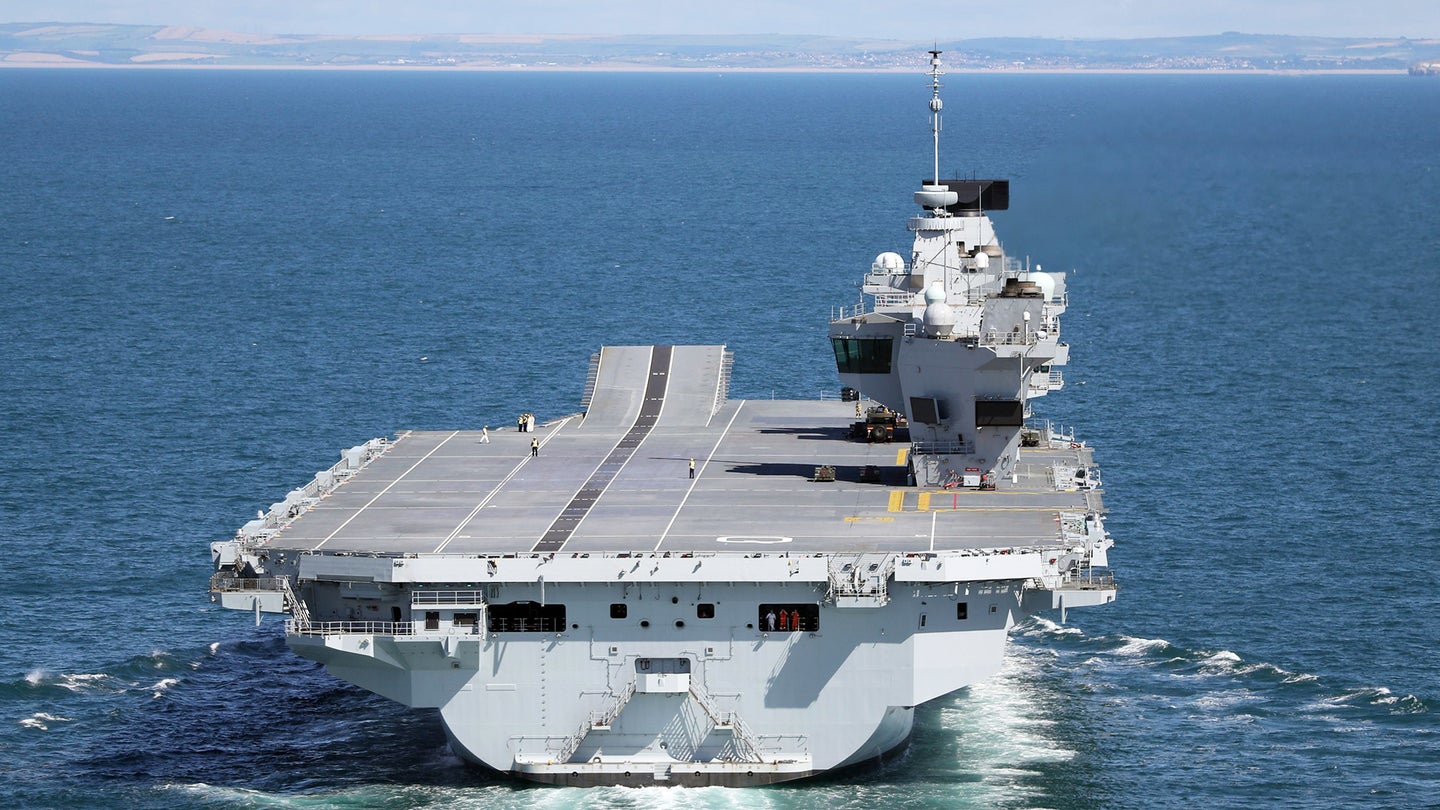 There are an endless number of opinions regarding the relevancy, operational feasibility, and overall opportunity cost of the UK's two new Queen Elizabeth class supercarriers, and the ship's capabilities are always part of this debate as well. But one thing seems glaringly clear—these massive vessels are woefully lacking when it comes to their ability to defend themselves from an anti-ship missile barrage.

These mighty ships displace 70,000 tons, will deploy with over 1,500 souls onboard, and will carry dozens of aircraft that collectively cost billions of dollars, yet they are only equipped with three Mk15 Phalanx close-in weapon systems (CIWS), with each covering a slice of airspace surrounding the vessel. The decades old Phalanx remains a capable system in its upgraded form, especially against traditional anti-ship cruise missiles and small unmanned aircraft. It can engage small surface threats as well. But it also suffers from limited magazine depth, highly limited reach, and is not that well suited to defend the ship against higher-end supersonic and stealthy cruise missiles that are now proliferating around the globe.

This is especially true when it comes to fending off higher-volume missile barrages. In other words, the Phalanx represents an absolute minimum in close-in defensive capability for any surface combatant. For a massive aircraft carrier it alone is totally insufficient.

The main difference between this armament and what is found on the Queen Elizabeth class is that these vessels have their own layered air defense system that can operate independent of a larger carrier group and its integrated air warfare concept.

This starts with the ship's ESSM capability that can reach out a couple dozen miles and hit highly agile targets, and it can now do so without independent radar illuminators guiding them to said target. The RAM capability can also hit highly agile and fast-moving targets but at closer ranges—about half a dozen miles out—via homing in on the target's infrared signature and/or its electronic emissions.

Finally, if all else fails, the Phalanx can spew a string of tungsten at the incoming missile at very short ranges in hopes of shattering it before it reaches the carrier's hull or superstructure. The Queen Elizabeth class has just this last ditch inner most defensive layer.

What's also important to note is that each layer uses different types of detection and engagement concepts to attack a threat, making their combined layered defense even more potent. What electronic countermeasures may confuse an ESSM, wouldn't work on a RAM, and so on.

The Queen Elizabeth class will supposedly receive the Terma decoy system, but it's unclear if the ship will also be outfitted with an extensive electronic warfare suite of any kind. If there aren't any plans to do so, it would extremely alarming, especially considering these systems are just as critical in stopping attacks as close-in kinetic defensive options, and they are probably the most realistic option for defending against emerging capabilities, such as hypersonic or near hypersonic anti-ship cruise missiles.

Like the Queen Elizabeth class, American flattops all carry fighter aircraft that can fly out and intercept threats at a distance. The problem here is that these aircraft have limited air-to-air missile carry capabilities, and hard to detect, sea-skimming missiles can sneak by, some at very high speed. In addition, keeping patrols airborne at all times is unrealistic and may not even be effective, especially if the potential vector of attack is unknown. In most cases a pair of jets would sit alert 5 or alert 15, but by the time they are in the air, having a substantial impact on an anti-ship missile barrage may not be possible.

Carriers that use short-takeoff and vertical landing (STOVL), like the F-35B, are also more sortie limited than their catapult launch and barrier arrestment recovery cousins. STOVL aircraft also usually have significantly less range than their traditional fixed-wing counterparts, and in the case of the Queen Elizabeth class, where no aerial refueling capability is planned at this time, keeping up persistent, or even semi-persistent combat air patrols is unlikely.

Also these vessels will usually deploy with a mix of aerial assets aboard, and fighters will usually make up just a portion of the ship's air wing. This means there are maybe a dozen or two dozen fighter aircraft available for any missions, including air defense, as compared to an American supercarrier that hosts double that number of fighters. And for many of the Queen Elizabeth's mission configurations she won't carry any F-35Bs at all, especially for littoral maneuver and amphibious assault operations.

These amphibious types of operations, where helicopters alone will make up the carrier's air wing, will also likely bring the ship closer to shore and in tighter spaces where her movements will be more restrictive and predictable. This will put the ship at even greater risk of anti-ship missile attacks, which can come at very short notice due to the close proximity to shore.

Some will say, "but there will always be a Type 45 destroyer around to protect her." Hopefully this is true, but the truth is these vessels, although capable, aren't anywhere near 100 percent reliable even while deployed. Key mission systems break down and need maintenance, sometimes suddenly, leaving huge gaps in the carrier group's air warfare defensive umbrella. Not to mention the Royal Navy's trouble deploying ships as it is—especially their Type 45s. And this is without the demands of potentially having to support two carrier groups placed upon the relatively tiny cadre of just six ships.

Most importantly, these destroyers, nor the more advanced and capable Aegis-equipped destroyers and cruisers that accompany American flattops, can provide an impenetrable air defense bubble even while they are operating at full capacity. When deployed with multiple examples in a flotilla, their overall air defense capability and reliability will increase, but will the Royal Navy really be able to consistently deploy two carriers with a minimum of two Type 45 destroyers each and keep up with so many other tasking commitments?

Regardless of how many top-of-the-line air defense picket ships can be allocated to a single carrier group, it's most important to understand that the enemy is unlikely to fire a single missile, or even a handful at one time. A future anti-ship missile attack in a medium to high-threat combat environment would be multi-layered using various anti-ship systems at once, and even possibly anti-ship ballistic missiles.

Peer states have built up their capabilities to do just this, and even rogue states and non-state actors have increasingly deadly capabilities that can target a carrier and its escorts, especially at close range, while transiting through or operating in tight waterways. The Persian Gulf in particular is an especially deadly spot for a carrier group, and Iran has throngs of anti-ship missiles that could be launched at short notice, all within close range of a patrolling carrier group. In essence, missile attacks in littoral environments reduced many of the advantages offered by an air warfare destroyer escort and its longer-range anti-air missiles.

Even during "blue water" operations far out to sea, a cruise missile barrage from shore, an enemy submarine, or a ship can overwhelm the best defenses. Simply put, "leakers" can get through, and against a robust enemy, multiple leakers of various performance capabilities could slip by and make their way into the carrier group's inner air defense sanctum. With all this in mind, the Royal Navy's choice to rely on the Phalanx alone for organic close-in air defense is very concerning. At the very least, Rolling Airframe Missile launchers should be added to the Queen Elizabeth class's onboard arsenal, as well as an advanced electronic warfare suite if one isn't already planned.

If space is limited, and integration costs are to be minimized, even something like SeaRAM, which can operate independently of the ship's combat system and sensors like Phalanx does, would be a worthwhile interim solution. The U.S. Navy has even retrofitted some of its forward-deployed destroyers with the system to dramatically augment these ships' single Phalanx mount as it was seen as inadequate for patrols in higher-threat areas, especially those where anti-ship missiles are prevalent.

Some may say that the Royal Navy will equip these ships with directed-energy (laser) CIWS defenses once the technology is mature. That is fine a good, but these ships will be fully operational long before this capability can compete with kinetic systems available today. And even then they may be severely lacking when it comes to engaging multiple targets quickly, especially fast-flying ones and in environmental conditions that are common in maritime environment. So this is simply not a relevant argument at this time.

There is no bigger naval target for the enemy to go after than an aircraft carrier, both in terms of size and radar signature, and in terms of symbolism and military value. Spending billions of pounds developing and building these ships, and then spending billions more on aircraft to fly from their decks, but not spending a handful of millions to give them adequate and proven defenses that are considered minimum requirements by their foreign flattop operator counterparts is a misguided and strange choice.

Maybe there isn't the will or the dollars to get these ships fully outfitted with similar defensive capabilities as their American counterparts, but at the very least giving them two types of very different close-in weapon systems and an electronic warfare suite to backstop them isn't too much to ask. Considering what's at stake and the rough neighborhoods where these ships could find themselves, it really shouldn't even be choice.

In the end one has to remember that the thing about shipborne defenses, especially the close-in variety, is that you only need them when you really actually need them, and a little money spent now can help forestall a big disaster and huge economic loss down the line.