The Russian Air Force got creative with its shoulder-fired surface-to-air missile countermeasures for Putin's visit to Syria. 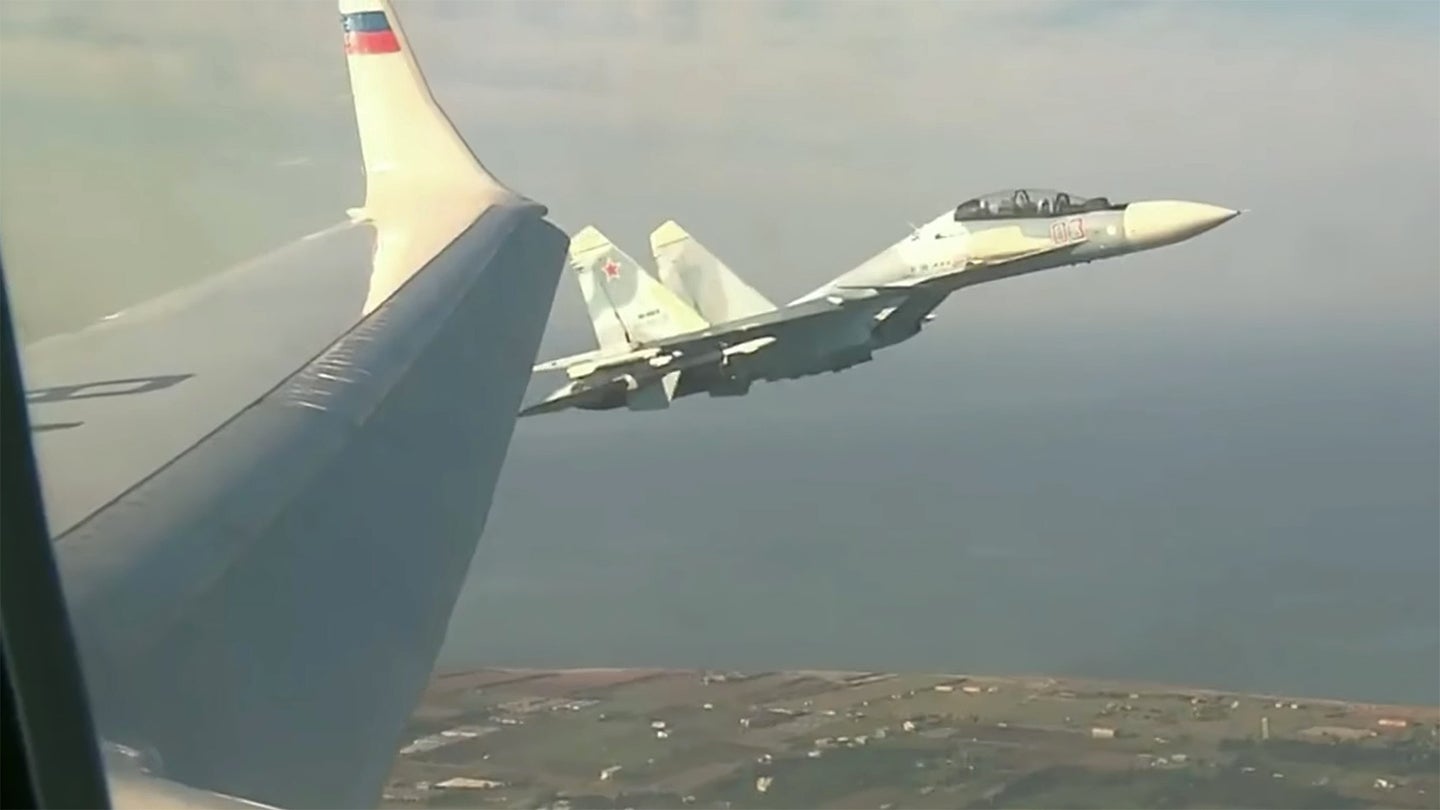 Russian President Vladimir Putin's triumphant surprise trip to the Middle East earlier this month wasn't without some peril. Aside from possibly taking out Syrian dictator Bashar al Assad, doing the same to his closest ally and the architect of his regime's survival would be an opposing faction's highest prize. With this in mind, Russian military planners took special and somewhat unorthodox precautions to protect their President while the aircraft he was in was at its most vulnerable—on approach to landing at Russia's now permanent master air base south of the Syrian port city of Latakia, also commonly referred to by the Kremlin as Hmeimim Air Base.

Hours after his visit to the base on December 11th, 2017, Russia released a highly circulated clip of President Putin riding in the Tu-214PU's opulent interior, and looking out his window to see Su-30SMs form up on the aircraft's wing. The fighters tightened up ever closer as the aircraft descended. This wasn't just a show of force, a militarized welcoming party, or a tactic to offer a general sense of security to the flight as it entered Syrian airspace, it was used to provide "heat traps" to mask the Tu-214PU's own thermal signature from potential enemies wielding man-portable air defense systems (MANPADS), aka shoulder-fired, heat-seeking, anti-aircraft missiles.

According to the semi-state news agency RT, one of the Su-30 pilots named "Yury" described their mission as such:

"In this case, the task was to meet [the Russian President’s plane] and escort it to the landing strip... One of the tasks was to hereby cover it with ourselves, roughly saying... The temperature of the exhaust gases of the [Su-30SM] plane is much higher... We were flying at maximum capacity because our planes have different speed and it was that we were protecting the presidential plane from both sides with ourselves.”

Putin also commented on the operation as well, giving his thanks:

“The pilots, those guys, I watched them. They were not just flying nearby during landing, they descended to be flying below our plane... I am thankful to them and want them to hear and know that.”

This was a novel way to possibly overcome the Tu-214PU's lack of infrared countermeasures as it entered into the MANPADS engagement envelope—roughly up to 18,000 feet—over Syria. The aircraft took the route that would provide the least exposure over Syrian territory, flying from Sochi, over Turkey and the Eastern Mediterranean, before turning inland over Syria to the south of the air base to set up on final approach.

The Tu-214PU is used as a flying command post and VVIP transport for the Kremlin. Think of it as something akin to an E-6B TACAMO and a C-32A—more commonly known as Air Force Two when the Vice President is onboard. It is a twin engine aircraft roughly the size of a 757 and differs significantly from the President's usual aerial chariot, the much larger, four engine IL-96-300PU.

The Su-30SM doesn't have a missile approach warning system, but two pairs of eyes watching for the telltale smoke trail of a missile streaking into the air, and the ability to deploy large clouds of flares at an instant, could provide a poor-man's countermeasure system that goes beyond masking the Tu-214PU's infrared signature with the Su-30s comparatively hot AL-31FL engine exhausts. Still, at very low altitude there would be little time to react to such an attack manually.

Russia had been roughly 15 years behind the U.S. when it comes to infrared countermeasures used to defend large aircraft from MANPADS threats. American aircraft like the C-32, VC-25A, C-17, C-5, C-130, CV-22, CH-53 and others use increasingly capable and even more miniaturized directional infrared countermeasure systems (DIRCM) along with traditional decoy flares and BOL-IR countermeasures to defend themselves. DIRCM systems fire a low-power modulated laser beam into the incoming missile's infrared seeker to blind it. This system, along with an aircraft expendable decoys, are cued collectively by a automated central system and control panel that receives missile approach warning indications from staring sensors distributed around the aircraft.

In recent years Russia has worked hard to begin closing this technological gap and has started to field their President-S DIRCM system, with combat helicopters in Syria appearing with it installed in 2016. Foreign operators of Russian helicopter types have also been receiving the system as well. The technology is being miniaturized and adapted to fit on large and small Russian fixed-wing aircraft. Additionally, Russia is also looking to turbo-charge development of similar systems that will utilize similar early warning missile detection sensors to defend their bomber fleet from missile attacks.

Sukhoi's Su-57 fighter supposedly features a turreted DIRCM system, known as the 101KS-O, similar to the latest generations offered by western manufacturers. Its laser turret can be seen housed under a small glass dome that is mounted behind as well as below the Su-57s cockpit. Missile approach warning systems that will direct this system are scattered around the aircraft. But the extent of the 101KS-O's capabilities and exactly when it will be fully operational is still unknown.

Similar DIRCM capabilities haven't been ported over to the latest generations of high-flying western fighter aircraft, but high-energy lasers that can shoot down any type of incoming missile, not just blind infrared missile seekers, are now one of the top developmental air combat priorities for the Pentagon.

The use of Su-30s deployed to Syria for this unique and very high-profile mission also explains why the type wasn't visible in video shot of Putin's visit to the base, whereas all the other tactical jet types known to frequent the base were. These aircraft likely stayed airborne patrolling the skies over and near the base during his relatively short time there.

If anything else, this application of creative tactics shows how Russia's air arm can be quite resourceful when it needs to be.