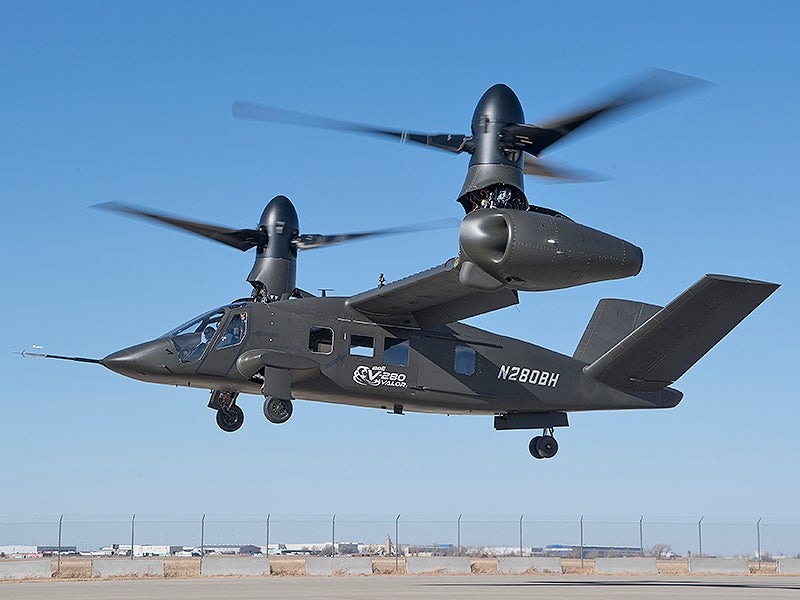 After years of work, months of ground tests, as well as recent delays, Bell's V-280 "Valor" tilt-rotor prototype has crept into the air for the very first time. The historic moment occurred around 2pm local time at the company's plant in Amarillo, Texas. The flight is said to have lasted around 30 seconds and comes as quite the Christmas gift for the company, which is betting big on the long-term viability of tilt-rotor technology and the Army's willingness to agree.

The aircraft is being developed to compete in the Army's Joint Multi-Role Technology Demonstrator (JMR-TD) program, part of the larger Future Vertical Lift (FVL) initiative, and will face off against Sikorsky's SB>1 "Defiant." Sikorsky's concept is radically different than Bells', featuring a compound coaxial rotor design with a pusher-prop at the back. You can read more about Sikorsky's Defiant concept in this past feature. Both types aim to drastically improve upon current traditional helicopter performance, with a cruise speed between 250 and 300 knots, and vastly improved range.

Both designs have their advantages and disadvantages, with each team digging in for what is going to be a fierce competition. Both manufacturers are already claiming their design is the most capable in various respects. Clearly there are some aspects of each entrant that may be more attractive to the US Army and potentially other Pentagon and foreign users as well. Sikorsky's concept is closest to a traditional helicopter, and its footprint will be similar as well—something Bell will have trouble claiming. This is especially important when getting in and out of tight spots—something that the H-60 has had to do in combat many times during decades of combat operations. Also the Defiant could scale better, especially for an attack variant.

On the other hand, tilt-rotor technology, once seen as a white elephant of the aerospace world, has become a proven commodity for the USMC, and the USAF to a lesser degree. With Japan's order being in the process of being fulfilled, export success for the V-22 Osprey could still be possible.

The Osprey has always been limited in performance due to unique dimensional requirements placed on it by the USMC, something the V-280 won't have to accommodate. This could potentially open up the tilt-rotor performance envelope like we have never seen it before. Bell said the following in a press release that was posted shortly after the Valor's first flight:

"The Bell V-280 Valor is postured to provide the U.S. Army with the highest levels of maturity and technical readiness. The aircraft is designed to provide the best value in procurement, operations and support, and force structure, while delivering desired leap-ahead performance capabilities with increased maintainability, reliability and affordability to the DoD. With twice the speed and range of conventional helicopters, the Valor is designed to offer maneuver commanders unmatched operational agility to self-deploy and perform a multitude of vertical lift missions currently unachievable in one aircraft. The Bell V-280 is a combat force multiplier with superior performance, payload, survivability, and reliability to give the warfighter the decisive advantage."

Boeing split from its long time tilt-rotor partner, Bell, for the FVL tender, teaming up with Sikorsky (which is now owned by Lockheed) instead. At the time this seemed to be a damning indictment of the V-280 Valor concept and its tilt-rotor technology, but Bell has continued with the program and it has drawn substantial interest from the Pentagon and foreign governments alike.

In all reality there isn't anything to say that there will be the will nor the dollars to purchase large fleets of these more complex, albeit farther and faster flying helicopter alternatives even when their technologies are tested and one is eventually chosen by the Army. If the unit cost is a multiple of the UH-60's sticker price, one would be hard pressed to see how the Army could afford to replace anywhere near its entire fleet of the H-60s with such a design, regardless of its capability. And even though commonality may be a big driving factor for the Army, other services, not to mention other nations and the commercial market, could find the losing design far more attractive for certain missions.

Differences in capabilities may also overcome the Army's focus on a common platform. For instance, for the attack helicopter and some light tactical transport duties, being as nimble as possible while flying low and slow may give Sikorsky's concept a great advantage over a tilt-rotor. Long-range transport duties and search and rescue missions may end being better served by the Valor. In the end, we will have to wait and see if there is enough room in the defense marketplace for both designs, or even one at all, but there very well could be in the civilian and commercial space.

Still, if either one of these types, or even Sikorsky's smaller light attack and scout variant of their concept, the S-97 raider, makes it into any sort of production, that concept will have an edge going forward. These are not going to be cheap machines, and any ability to realize reduced costs through production scalability will be a big advantage.

We'll keep a close eye on the V-280's flight testing as it progresses, and Sikorsky's Defiant is slated to fly in 2018, but it the S-97 has been in flight testing for some time now.