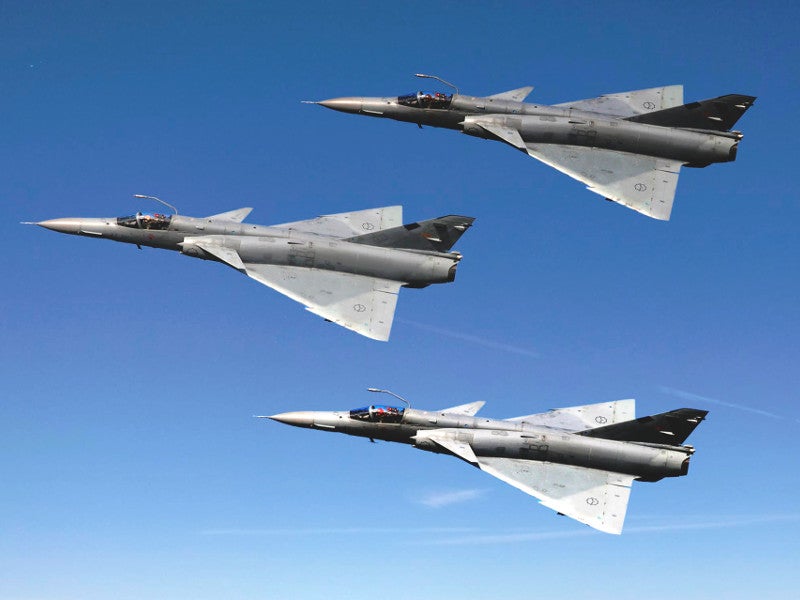 Draken International, a private company that specializes in supplying “red air” adversaries to help train U.S. military fighter pilots, among other services, has announced it will be adding a dozen ex-South African Cheetah fighter jets to its already impressive inventory. It’s the latest in a flurry of developments through this steadily growing industry, as firms try to meet increasing requirements for 4th generation platforms or equally capable surrogates.

On Dec. 11, 2017, Draken released a statement outlining the purchase of nine single-seat Cheetah Cs and three two-place Cheetah Ds though Denel. Per the terms of the deal, the South African state-owned defense conglomerate will fully regenerate the aircraft, which have been sitting in storage since their retirement from the South African Air Force in 2008. In addition, Denel will provide additional support services for the aircraft going forward.

“Capacity and capability are the dominant themes for the ADAIR [adversary air] business driven by the contractual requirements of our customers,” Sean Gustafson, Draken’s Vice President of Business Development said in a statement. “Draken is committed to delivering extensive capacity in order to manage a majority of the enormous ADAIR demand throughout the entire [U.S. Department of Defense].”

The Cheetahs, which are capable of traveling at supersonic speed, will definitely expand the kind of capabilities Draken can offer and its capacity to do so. The aircraft are the result of an extensive South African modernization program for its fleet of French-made Mirage III fighter jets, which turned what is essentially a late second generation design into nearly a fourth generation aircraft.

After Apartheid-era South Africa found itself under an arms embargo in 1977, it had no choice but to either develop its own combat aircraft or upgrade existing designs. One of the projects the Atlas Aircraft Corporation, now Denel Aviation, crafted was a massive upgrade for the older Mirages.

The state-operated firm recruited a significant number of Israeli specialists with experience both working with the French design and working on the abortive IAI Lavi fighter jet program. Israel had already overhauled its own Mirage III and V fleets to create advanced derivatives known as the Nesher and the Kfir.

The resulting Cheetah is rumored to be a direct descendant of the Kfir and is similar in many ways, especially visually given with the addition of forward canards above the air intakes, but the South African aircraft does have its own distinct planform. Atlas claimed it had replaced approximately 50 percent of the airframe as part of the conversion.

The South Africans also upgraded the French engines inside and added additional stores pylons, an air-to-air refueling capability, a new Israeli-made mechanically-scanned pulse-doppler radar, more modern avionics and navigation equipment, and an electronic warfare suite to both alert the pilot to incoming missiles and jam their seekers. The upgrade also included the ability for the pilot to use a helmet-mounted sight for off-boresight targeting and a modernized Hands On Throttle-And-Stick, or HOTAS, control arrangement.

But the aircraft only began to enter service in 1986, at a time when South Africa’s foreign interventions were waning. Though they flew patrols during the so-called “South African Border War,” they never saw combat. In 1990, that conflict ended with the creation of the new nation of Namibia. Four years later, white minority rule in South Africa ended, which led to a significant review of the country’s security services and its foreign policy.

As such, the Cheetah Cs and Ds spent relatively little time in the air – Draken says its 12 aircraft will have an average of just 500 hour per airframe – before the South African Air Force replaced them entirely with the Saab Gripen in 2008. This low usage, combined with the jet’s other capabilities, made them an attractive and low-cost choice.

Even if they are cheap to acquire, the relatively unique aircraft – there were only ever 38 Cs and 16 Ds – could prove difficult and expensive to maintain, but the arrangement with Denel appears designed to mitigate that risk up front.

“These highly capable platforms were selected over early model F-16s and non-modernized Mirage F1s based upon their true fourth generation capabilities,” Draken’s Gustafson said. “This is why we have purchased … the Cheetah, the first truly fourth generation platform in the industry.”

This claim may not be entirely accurate given the South African jet’s pedigree, but it’s hard to deny that the jets are about as close to a fourth generation platform as one can get without actually buying one. And that’s an increasingly important consideration.

For more than two decades, the adversary air industry had been slowly expanding, especially in the United States. This has acceleratated as the Pentagon has faced budget caps and cuts, as well as a shrinking overall force size and a worn out fleet of 4th generation fighter jets, limiting the amount of personnel and aircraft

individual services can dedicate to the aggressor role itself.

This is only likely to become more pronounced as the U.S. Air Force, Marine Corps, and Navy acquire more fifth generation F-35 Joint Strike Fighters, something The War Zone's own Tyler Rogoway has written about extensively

over the years. It is simply not going to be cost effective to have 5th generations fighters flying as adversaries, especially for basic training duties. As for dedicated adversary units within the Pentagon's portfolio, funds to expand the number of squadrons focused on this mission even with fourth generation aircraft is unlikely to materialize. This is especially problematic because 5th generation fighters need greater adversary capacity to train against in order to challenge their pilots.

The Air Force in particular has scaled back their organic adversary elements in recent years. But faced with emerging threats and the need to train and challenge 5th generation fighter pilots in training, the service has become increasingly in favor of shifting increased aggressor capacity to private contractors, such as Draken. Using contractors gives the U.S. military more flexibility to schedule exercises around the training and pre-deployment needs of fleet units rather than the availability of aggressors and do so for a lower overall cost. The company provides its own pilots and maintains for its own aircraft, meaning the U.S. military doesn’t have to pull its own resources away from other priorities or maintain separate, dedicated units.

At the same time, the nature of the potential threat has begun to change, too. Advanced fourth generation aircraft are increasingly proliferating around the world, even among relatively small air arms, increasing the chances American aviators might encounter them in a real world situation. To try and keep pace, Draken has maintained a fleet that includes A-4K Skyhawks and L-159E Honey Badgers with modern pulse-doppler radars – the AN/APG-66 and Grifo-L respectively – and capable suites of self-protection systems.

These jets can and do provide opponents for the U.S. military’s most advanced aircraft, but there’s a physical limit to the kind of threats they can truly represent. Draken fully acknowledges that it decided to purchase the Cheetahs because its existing fleet cannot meet all of its customers demands. Namely something with a radar that can tote a jamming pod while traveling at supersonic speeds.

It is the same reason why the company announced it had picked up more than 20 ex-Spanish Mirage F1Ms in November 2017. Starting 1996, Spain had put those aircraft through a modernization program that added color multi-function displays, a new heads up display, GPS and other navigation system upgrades, modernized communications equipment, and other improvements. Perhaps most importantly, the aircraft received new Cyrano IVM pulse-doppler radars with air and sea search and air-to-ground ranging functionality.

“Purchasing fighter jets with modern radars and sensors well in advance of expected demand is the principal reason why Draken is the world’s largest provider of this vital service,” Gustafson had boasted in a separate statement at the time. “These Mirage F1s proved to be the best equipped and lowest time fighters of their kind available to the industry.”

Both these comments and the remarks about the Cheetah’s fourth generation capabilities are obvious digs at Draken's competitors, many of whom have also clearly seen the changing trend in requirements for more advanced adversaries. “The requirements we're seeing the [U.S.] Air Force describe clearly include a modern radar such as AESA [active electronically-scanned array] or a highly capable mechanically scanned array radar,” Jeffery Parker, CEO of Airborne Tactical Advantage Company, or ATAC, told FlightGlobal in September 2017.

That month, ATAC, a subsidiary of Textron since 2016, announced it would be acquiring more than 60 ex-French Mirage F1s and upgrading them with new radars and other systems. The Virginia-based company already operates Kfirs, as well. The next month, it emerged that TacAir had purchased more than 20 ex-Jordanian F-5E/F Tiger IIs and put the jets through an update program, which you can read about in more detail here. Other competitors exist as well, but at this time the thirst for commercial adversary air support is only likely to continue to balloon as the F-35 begins full-rate production.

Though private adversary air support is a growing industry in general, there is an immediate impetus to these purchases, too. In January 2018, the Air Force is likely to start considering who it will hire to provide those services at Nellis Air Force Base in support of its much vaunted Weapons School and capstone Red Flag exercises. Draken already been doing for years to a lesser degree. The deal could be worth as much as $7.5 billion over the next decade and require the winning company or companies to fly almost 37,000 flight hours in total, according to FlightGlobal. The Air Force is expected to pick a winner for the Nellis contract some time in 2019.

There’s clearly a desire on the part of these firms to get out ahead of the contract and make sure they have applicable fleets of aircraft operational beforehand. This won’t be the only such deal coming up by any any means either. And the international marketplace will be just as in need of these services as the domestic one.

Draken seems to be betting that the Cheetahs, as well as the Mirage F1Ms, will give it a significant edge over the competition.