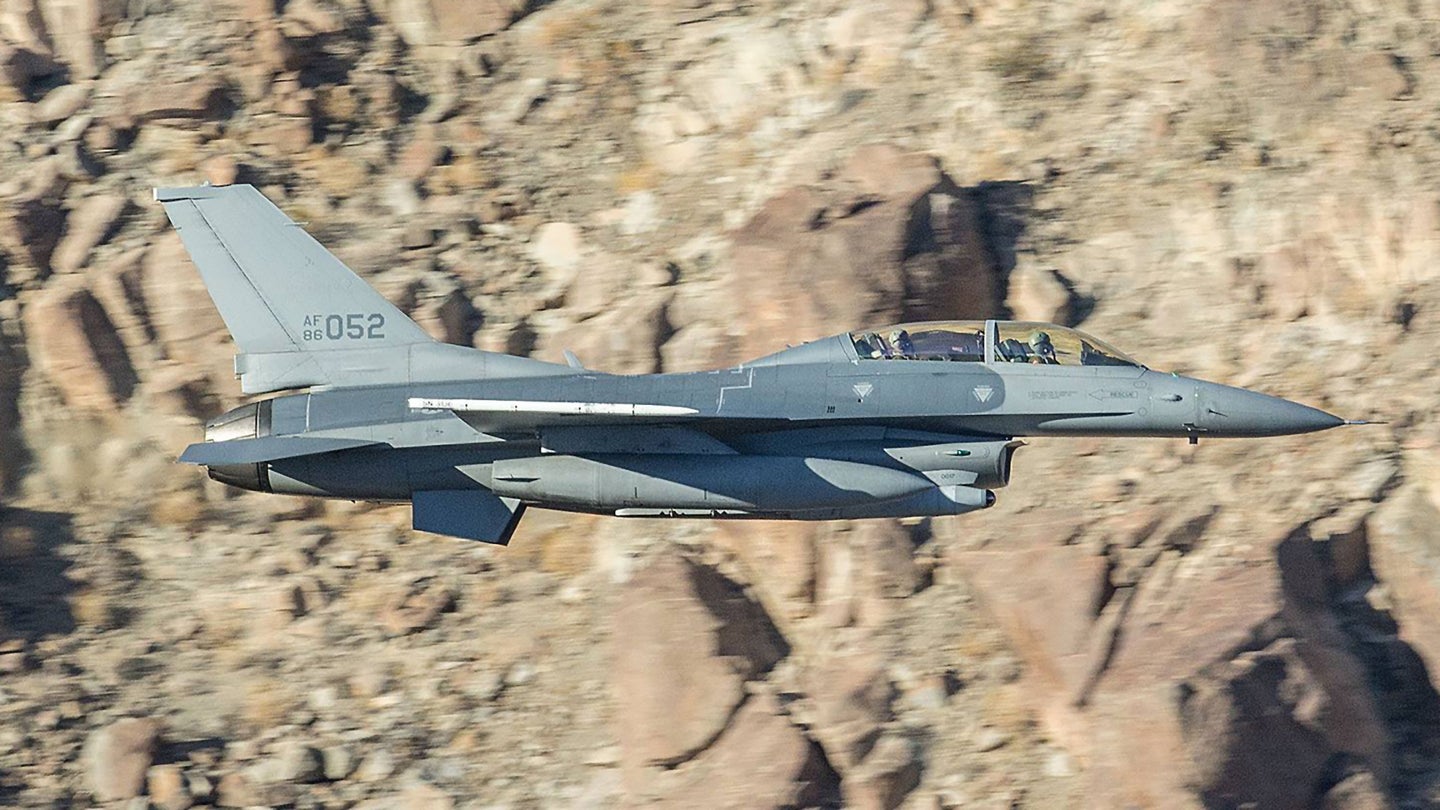 The Jedi Transition has become a Mecca for aviation photographers from around the globe, with all types of aircraft being snapped while maneuvering dynamically through Rainbow Canyon, also commonly referred to as "Star Wars Canyon." And sometimes rare aircraft make an appearance, but in the case of photographer David Atkinson, he didn't just catch an atypical type of aircraft, he caught a flying ghost of sorts.

At first glance the Block 30 F-16D pictured above, serial number 86-0052, may look like any other F-16, but upon closer examination its registration and the unique equipment it carries makes it clear that it is anything but.

On the right intake "chin" station, the F-16 carries an infrared search and track (IRST) pod. You can learn all about what an IRST is and how they are being introduced onto American fighter aircraft in this past in-depth post of mine. But in summary, they have the ability to detect and discriminate enemy aircraft targets at relatively long ranges in a passive in manner. In other words, they don't emit detectable electromagnetic energy like radar waves in order to detect an aircraft from afar, instead they do so by sensing the aircraft's infrared signature, which is especially tough to hide for fast-flying, high-performance fighters—even stealthy ones.

The F-14D was the last American tactical aircraft to fly with an operational IRST. Modern iterations of the system reemerged six years after the Tomcat's retirement, appearing only one time, mounted on an F-16C belonging to the 64th Aggressor Squadron during a Red Flag exercise. Since then the Super Hornet program has added an IRST to their upgrade pathway which is now underway. New production Strike Eagle export variants also feature the "Tiger Eyes" IRST mounted above their targeting pod.

The USAF is slated to equip some of its "Golden Eagle" F-15Cs with a podded IRST system, with both Lockheed's Legion Pod and Northrop Grumman's similar offering competing for the contract. In the end the Legion Pod won. The F-15C/D's Talon Hate communications node pod program also includes an IRST in its forward bay.

What all these initiatives and systems have in common is that they all feature the same IRST sensor—Lockheed's IRST21 based on an upgraded version of the AN/AAS-42 IRST that equipped the F-14D.

So what is this random F-16 doing carrying an IRST pod that doesn't really exist in the USAF's inventory? That has to do with where it is likely based.

86-0052 is more or less a ghost. It has not been traced to a base for nearly a decade according to F-16.net and no photos of it have been taken for quite some time, at least as far as we can tell, yet the airframe is active. Block 30 "big inlet" F-16Ds are known to fly without any base markings out of Groom Lake, otherwise known as Area 51. These aircraft are clearly seen in satellite photos and have even been photographed flying around the Nellis Range Complex, often carrying a white instrumentation pod on its wing rail along with other pods, including electronic warfare systems. They have been seen sparing with Su-27s flown by the highly secretive Red Hats squadron, but their primary use is likely to chase test articles and document their flights, and to provide a sensor platform for evaluating different aspects on new and exotic designs.

Larger aircraft carry out this mission as well, including the grotesquely modified NT-43A, which often uses the callsign "Rat55," but the F-16 with a podded sensor system offers testers a less expensive and far more nimble platform for evaluating the infrared signatures of various clandestine aircraft and modifications.

Amazingly, just days ago, what is likely this same exact F-16 was photographed doing just that near Area 51. In this case it was chasing an F-117 Nighthawk, with what appears to be its IRST pod attached. I have long posited that a handful of F-117s still flying are being used to evaluate new low observable applications and radar attenuating structures. As I wrote in 2014:

By specifically utilizing the F-117 for such-real life tests and evaluations, defense program managers could have a control variable, in this case the F-117′s well documented radar cross-section, infrared and visual signature, and an independent variable for which to test upon it. That independent variable being an experimental radar absorbent material or other signature control application.

On the radar and infrared tracking side of argument, the F-117 is also a near-perfect and highly available low observable aircraft to test everything from ground based radars and SAM systems, both foreign and domestic, AWACS modifications, fighter radars and even infrared search and track systems.

By doing so, testers can come up with a clear idea of what the capabilities of the system being tested are against a hard to detect target. In doing so, tacticians can work on solutions for defeating any weaknesses in the system while at the same time working on emphasizing its unique strengths. Even keeping a couple "sterile" F-117s available for calibrating and improving the DYCOMS array at Groom Lake, used for measuring the radar cross sections of aircraft flying under real world conditions, may be in itself an entirely necessary and worthwhile reason to keep a small cadre of F-117s operational."

So there you have it, this seems to be a rare sighting of a specially equipped F-16 that lives its life out in the most highly classified flight test center in the world. Clearly American stealthy aircraft designs' weakness when it comes to IRST capabilities is and should be a serious concern as these systems are a staple of Russian and Chinese designs and are seen as one key way to negate the advantage of a combat aircraft that possesses a tiny radar cross-section.

It is also possible if not probable that these Groom Lake based F-16s visit Edwards AFB from time to time, as the flight test unit out of Area 51 is a detachment of the greater USAF flight test establishment based at Edwards, and especially key elements based at Edwards' shadowy North Base installation.

Shooting aircraft in the Jedi Transition is often related to fishing—you simply never know what you are going to get, if anything at all. But in this case David Atkinson caught himself a rare specimen indeed.

Update: Theaviationist.com just posted a good spot on a photograph we didn't have at the time of publishing, noting the pilots are indeed wearing a Red Hats and a Red Eagles patch—both of which have long histories when it comes to foreign materiel exploitation (FME) programs—flying foreign aircraft to learn their strengths and weaknesses and to train against them. So basically this confirms the aircraft's home base and at least one or possibly two units that get to fly these aircraft out of Groom Lake. Once again, read all about the Red Hats here.