The chamber is an ideal place for the B-2's upgrades to be tested, not to mention the upcoming B-21 Raider's new systems. 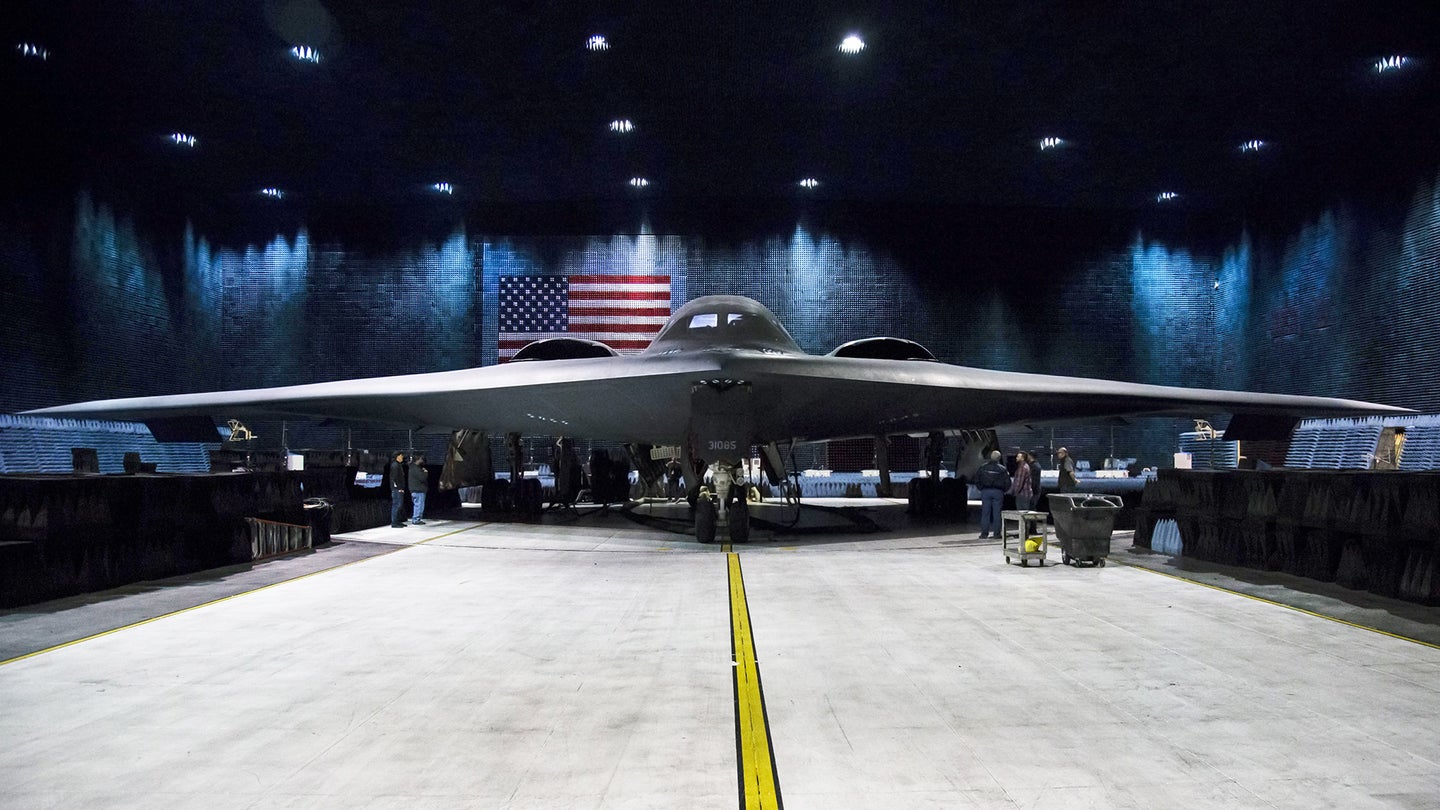 The B-2A Spirit, the world's only operational stealth bomber, has made its first visit to Edwards AFB's giant Benefield Anechoic Facility (BAF) this week. We have talked a bit about the sprawling and wildly elaborate infrastructure that supports America's weapons development programs lately, including how some of these sites look more like something out of Close Encounters of The Third Kind than real life, and the BAF certainly fits this bill.

The War Zone did a short profile on the BAF when the B-1B was rolled inside its electromagnetically silent interior for a series of tests in the summer of 2016, in it we described the facility and its mission as such:

"The BAF was actually designed during the Reagan era, primarily to support the B-1 and its faltering electronic self-defense suite. Since then, it has serviced aircraft from around the globe. The facility is even named after Rockwell chief test pilot Tommie "Doug" Benefield, who perished on August 29th, 1984, in a crash of a B-1A—the faster Carter-era progenitor of the B-1B.

“The chamber is filled with polyurethane and polyethylene pyramids, radar absorbing material designed to stop reflections of electromagnetic waves. The size of the pyramids, which are painted dark blue or black, varies depending on the particular frequency and test procedure being conducted. Aircraft systems can be tested and verified that they work properly prior to actual flight test.

A big part of the tests that BAF and other anechoic chambers do regards how the aircraft’s electronic systems and emissions interact with one another, and with those from the outside world. For aircraft with advanced electronic warfare suites, like the B-1B or the EA-18G, getting the aircraft to not jam itself can be a major undertaking."

The B-2's visit to the BAF is supposedly for environmental control checks as the facility's staff spent a year installing upgrades to accommodate the B-2's unique needs. According to an Edwards AFB press release, the flying wing bomber will be visiting the chamber again in the future for "electronic warfare testing."

The B-2 continues to receive a series of planned upgrades, including those to its avionics, communications, and sensor systems—namely to the aircraft's AN/APQ-181 low-probability of intercept (LPI) radar, which features two massive arrays. Originally these were passive electronically scanned arrays (PESAs), but under the B-2's upgrade roadmap, they are replaced with much more capable active electronically scanned array (AESA) sets. This gives them a host of advantages in terms of range, fidelity, and quick scanning ability, and also likely gives them a secondary electronic warfare and communications capability as well.

The original radar system operated on the narrow Ku band, the same as modern airborne satellite communications systems that the Defense Department and the commercial industry like to use. The new radars still operate in the wider J band, of which the Ku band represents the very top of, but they are likely better de-conflicted with these communications systems. The interaction of various electronic systems installed on an aircraft is exactly the type of thing the BAF was built to identify and quantify. Other upgrades to the B-2, such as to itsDefensive Management System, will also have to be tested for negative interactions and anomalies caused by the aircraft's other systems.

What isn't clear is exactly why the B-2 hasn't needed the BAF's services in the past as the aircraft has been flying for nearly 30 years, and in operational service for 20 years. Regardless, it's possible that the BAF has been upgraded to support the B-2 because it will also have to support the B-21 Raider in the not so distant future. Either way, the B-2 now has one of the USAF's best developmental resources behind it, which is a good thing as the fleet of 20 Spirits is slated to serve into the next half of the century.