Details about America's next stealth bomber have been scant to say the least, but now we have confirmation on two key capabilities of the aircraft. 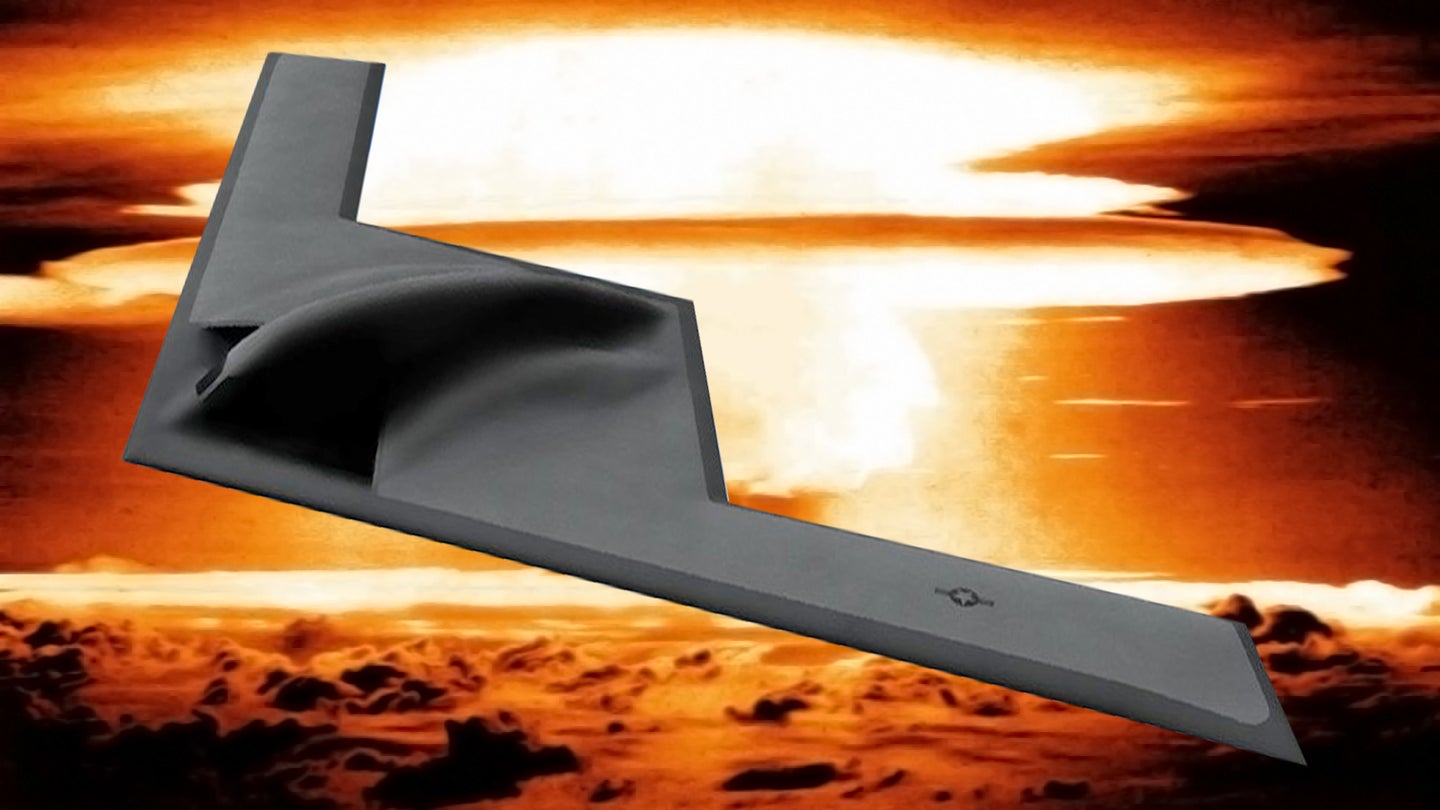 The USAF has kept the details surrounding their new Long-Range Strike Bomber (LRS-B), now known as the B-21 Raider, tightly under wraps even two years after the contract to build the stealth jet was officially awarded to Northrop Grumman. Often times reports on the aircraft's basic capabilities are contradicting, and we can only speculate as to the possible cutting edge technologies being integrated into the design—ones that will be needed to keep the aircraft relevant over many decades of service. Now, thanks to the Freedom of Information Act, The War Zone has received documentation that can put speculation to rest over two of the aircraft's most prominent features.

We received document DODIG-2015-170, "Audit of the Acquisition of the Long Range Strike Bomber," dated September 8th, 2015, as well as other documents in a heavily redacted form, but amongst the sea of black are two highly relevant official confirmations as to the aircraft's baseline requirements.

The document clearly states that the LRS-B will indeed be optionally manned as a core requirement.

The requirement for unmanned operations is reiterated again by a directive letter from the Secretary of Defense that is also included in the FOIA documents. It reads:

"I direct the Air Force to develop an acquisition program that delivers a survivable long range penetrating bomber capable of manned and unmanned operations where range, payload, and survivability are balanced with production cost to provide an..."

With the LRS-B's core design requirements largely frozen since early in the decade, it would seem that this is the clearest proof yet that the aircraft will be built from the outset for optionally manned operations. This has been something of a debatable topic in recent years, with various reports stating that the aircraft will not have unmanned capabilities until possibly far later on in its service life, to essays about why the aircraft should have an unmanned capability from day one.

According to this audit, the aircraft is being designed around an unmanned capability, which indicates it will be capable of unmanned operations far earlier in its career. The USAF could choose not to take advantage of this capability initially, but an unmanned LRS-B is a highly attractive proposition. In fact its more attractive now than it was years before.

The LRS-B, now the B-21 Raider, will be much more than a bomber. That designation is probably viewed best as more of a function of heritage than anything else. Beyond its deep strike role, the B-21 will be a multi-functional intelligence gathering and networking platform. And due to what is very likely to be its high operating altitude, its ability to execute non-kinetic functions will probably become as important as anything else.

The USAF is already looking at moving away from traditional manned discreet intelligence gathering platforms to unmanned systems that can do multiple things in a more persistent manner, and in higher risk environments than their manned counterparts. The JSTARs replacement program is a prime example of this, where the flying service is now stepping away from a manned, more traditional solution and looking towards unmanned aircraft and modular tactical options to fulfill its mission set.

A high-flying optionally manned B-21, which will be equipped with powerful sensors, including high fidelity and long-range radar systems, advanced communications, and myriad electronic intelligence gathering capabilities, would be able to penetrate into an enemy's anti-access "bubble" to garner information on their ground and sea movements. A manned solution, like one based around a business jet platform or airliner, or even an unstealthy high-altitude, long-endurance unmanned aircraft like the RQ-4 Global Hawk, would be relegated to standoff surveillance duties which may keep their sensors out of the effective range of their target area altogether.

Aspects of Northrop Grumman's work and experience on developing secretive high-altitude stealthy drones, namely the so called RQ-180 that has supposedly been flying for the better part of a decade now, is surely being rolled into the B-21 design. As such, the USAF is likely trying to kill multiple birds with a single stone by mass producing the B-21 with similar unmanned surveillance capabilities in addition to its manned strike role and nuclear attack roles.

The ability to loiter above tactical assets operating below, and for very long periods of time, is likely also critical to B-21's networking mission. It would offer data fusion and rebroadcasting abilities for stealth assets, like F-22s and F-35s, and especially unmanned combat air vehicles (UCAVS), drastically increasing each platforms' situational awareness, battlefield cooperation abilities, and the ability for operators and commanders to monitor and control the forward battle space from thousands of miles away. We discussed this capability in a past feature regarding the B-21's high altitude design, stating:

"It also means the B-21 will be able to loiter above the tactical aircraft air combat environment below. As such it could act as a communications and data link connectivity node, sucking up information from the F-35's, F-22's, and one unmanned combat air vehicle's proprietary and stealthy data links. It can then connect these aircraft below by rebroadcasting updates of a "fused" common battlefield picture on each of their individual waveforms.

This concept, which has been cryptically touted in multiple organizational concept charts in recent years, solves a number of problems and fits in with two high priority USAF initiatives. Those include focusing on networks and information sharing, as well as morphing from a platform-centric fires and intelligence gathering strategy to a  "distributed" one."

The nice thing about having an optionally manned multi-role platform for these tasks is that testing and early mission capability can be conducted with a crew in the cockpit, before turning over those missions to the unmanned concept of operations. This equates to less risk early on and a quicker developmental timelines as unmanned aircraft capability usually pays off in the back half of an aircraft's testing/developmental curve. In other words, it is easier to get the capability into the field rapidly with pilots in the cockpit, and then transitioning to unmanned operations for the same missions once testing has occurred and various systems have been troubleshot and proven mission effective.

Another part of the B-21 program where there has been much speculation is on the aircraft's nuclear mission. The answer as to when or even if the aircraft will have this capability seems to be different depending on who you ask. The FOIA documents clearly lay out the requirements for the nuclear mission and its activation timeline, stating:

"Nuclear Capability. According to the acquisition strategy, the baseline capability will include all hardware and software necessary to make the LRS-B capable of carrying (i.e. loading, carrying, releasing, initializing, authorizing, and pre-arming) the B61-12 nuclear weapon."

The document goes on to detail exactly when the LRS-B will be required to field these capabilities:

Additionally, in the FY 2013 Nation Defense Authorization Act, Congress mandated that the LRS-B be:

-Capable of carrying nuclear weapons at initiation operating capability; and

So once again, according to these documents, the B-21 is being built and will be delivered with full nuclear capabilities and within two years of initial operating capability it will be certified to use that capability operationally. In other words, operational testing, training, and tactics development will be what holds the B-21 back from being nuclear capable on day one of IOC. But two years is pretty quick in terms of modern advanced aircraft development timelines.

So at the very least these documents clean up the record on two of the B-21's primary capability sets. And considering how few details we have on America's next stealthy strategic weapons and sensor platform, that's a good thing.

It would be nice to see the USAF will begin releasing more details about their new bomber in the near term. The lack of public information is seen in retrospect as a contributing factor that led the early doom of the B-2 Spirit's production line. Although the need to do so seems to be less pressing now that Donald Trump is in office. His administration has taken up "rebuilding" the armed services as a key policy pillar, with a special emphasis on revamping America's nuclear capabilities.

Still, key congressional figures, including Chairman of the Senate Armed Services Committee Senator John McCain, have been very critical of the USAF's unwillingness to open the program up to more scrutiny. During a hearing with Air Force Secretary Heather Wilson and Air Force Chief of Staff General David Goldfein in June of 2017, this particularly heated exchange occurred:

"It’s understandable to keep the B-21 specific warfighting capabilities classified, but it’s difficult to understand why you should keep other aspects of the program under the veil of secrecy... Don’t the American people deserve to understand more about what their dollars are being spent, such as $2 billion in RND money requested in this year’s budget?...

"Senator, we are very open with the appropriate committees and the Congress about exactly what we’re doing and what we’re spending it on..."

McCain swatted down her claim:

“That’s not true, Madame Secretary. That is simply not true. The American people need to know if what’s going to spend $2 billion on what, an R&D? Does the Air Force plan on releasing any further details on the program? If so, when will you do so?”

He didn't get a clear answer back, with the two Pentagon leaders saying that they require 100 B-21s and a total force of 165 bombers. But in March of 2017, Defensetech.org reported that Lieutenant General Arnold Bunch, the USAF's attache to the Assistant Secretary of Acquisition at the DoD stated the following:

“With where we’re at today, I don’t see releasing anymore details for a period of time. We’ve been very open so far...It’s a balance of transparency so that people understand what we’re trying to do with making sure we don’t release too much information so that potential adversaries could get an advantage.”

With this in mind, and seeing how tight lipped the top Air Force brass are even towards the SASC Chairman about their new stealth jet, I wouldn't bet on an avalanche of new information relating to the B-21 program anytime soon.