When the President of the United States travels abroad, they never do so alone, but rather in the company of a massive security entourage at the ready in case a crisis erupts and America's commander and chief and other top officials need to rush to a safe location. With tensions on the Korean Peninsula at their highest point in decades, President Donald Trump's major visits throughout Asia haven't been any different, with the impressive presidential motorcade in particular on full display.

The War Zone's own Tyler Rogoway previously wrote a special feature breaking down the various components of the motorcade in great detail, which you can find in full here.

Trump kicked off the trip with a visit to the state of Hawaii on Nov. 3, 2017. He then moved on to Japan on Nov. 5, 2017, before touching down in South Korea two days later. There are scheduled stops still to come in China, Vietnam, and the Philippines. Both the Japanese and South Korean governments, the two American allies right at the forefront of the ongoing crisis with North Korea, rolled out figurative and literal red carpets for the American president.

On his first day in South Korea, Trump and the rest of the motorcade drove through the capital Seoul with a large police escort. Reuters' journalist James Pearson caught the spectacle on video from a great vantage point above street level, which you can see below, as the president passed by what he said were a crowd of supporters of former president Park Geun-hye and protesters, who police kept away from the main thoroughfare. South Korea's National Assembly impeached Park, who, had taken a hard line stance toward the North and focused efforts on modernizing the country's military, in December 2016. At least some of her supporters reportedly have a positive view of Trump, who they see as having a similar policy vision.

They definitely good a good view of the motorcade. In Pearson's video, seen below, you can identify most of the key vehicles, as well. You can see the police "sweepers" on motorcycles and patrol car moving ahead of the bulk of the procession, followed by the lead American cars.

Behind that, there are the two highly modified presidential limousines, nicknamed "The Beast," one of which is carrying Trump and other acting as a backup and decoy. The Secret Service refers to the one with the president as the "Stagecoach" and the other as the "Spare. Tyler Rogoway's earlier feature on the motorcade has a detailed description of the almost James Bond-esque capabilities of these vehicles to make sure they can protect the president, as well as their limitations, including:

"The Beast's defense capabilities include top-level ballistic armoring, night vision/infrared driving systems, a sealed cabin with an independent air supply capable of enduring a nuclear-biological-chemical (NBC) attack, and even a supply of the President’s blood type. Other rumored features include infrared smoke-screen and oil slick deployment capability, as well as tear gas dispensers, and, frankly, just about anything you or Tom Clancy can think of. All of this is in addition to a state-of-the-art communications connectivity system, including internet and secure telephone communications.

"The Beast," which was introduced in 2009 during President Obama's inauguration, has an imposing stance, and looks like the offspring of a Cadillac STS and an MRAP. For all its obvious benefits, this cool-looking Presidential hauler has its detractors. The limousine is more of an armored assault truck than a car, yet it does not benefit from an assault truck's ground clearance. It can be tricky to maneuver on tight city streets, is said to be extremely heavy, and has broken down while on high profile missions abroad. To be fair, the older model was not immune to breaking down either.

After that, there is the armada of black SUVs carrying the president's own personal security detail, a rapid reaction Counter Assault Teams (CAT), command and control elements, the communications vehicle dubbed "Roadrunner," intelligence personnel, and even a countermeasures vehicle with various defenses, including an electronic warfare jamming system to help disrupt roadside bombs and small drones.

Not immediately apparent is the large work truck carrying the Hazardous Materials Mitigation Unit, which often accompanies the motorcade. There is an additional white van, likely an ambulance, a bus with the press pool, and a number of silver SUVs that could be carrying specialized South Korean security forces, presidential aides, and some of the press pool.

As you can see, its not a small affair. On Nov. 4, 2017, the Secret Service Tweeted out about their support for the Asia trip, underscoring the size and scope of just the motorcade.

"With #POTUSinAsia we couldn't very well leave The Beast behind!" the agency's official Twitter account declared. There were two photos of at least 10 vehicles, including a pair of the hardened presidential limos, inside a massive U.S. Air Force C-5 Galaxy transport, attached to the post. Missing were some of the larger trucks, such as Hazardous Materials Unit, which would have been traveling along in another military cargo plane.

Even more transports would have been been necessary to ferry helicopters and other equipment essential for the trip to Japan and then on to South Korea and beyond. In Japan, the U.S. Marine Corps' VH-3D presidential helicopters, more commonly known as Marine One, flew Trump around to various meetings and engagements.

In South Korea, the President, along with Secretary of State Rex Tillerson and U.S. Army General Vincent Brooks, in charge of all American personnel in the country, made use of one of the Marine's VH-60N "White Hawks." The Marine Corps' Helicopter Squadron One (HMX-1) is in charge of flying these aircraft at home and abroad.

Trump is, of course, flying throughout the region on Air Force One, the common name for one of two VC-25A when the President in on board, both of which are highly modified presidential aircraft. Notably, the other aircraft has been accompanying the president, which reporters have spotted flying in loose formation with its sibling, in order to provide a spare in case of a maintenance issue or some other emergency.

And it doesn't stop there, the full weight of the U.S. military, as well as federal law enforcement, routinely supports major president trips at home and overseas, something we have explored in detail many times. In December 2016, Tyler Rogoway explained:

The truth is that when the President travels, regardless of the aircraft her or she is in, so do a pair of Marine One helicopters via C-17, and the Presidential motorcade via C-5 or a series of C-17s. This is for every stop, everywhere. If the Marine One helicopters being used instead of the motorcade, MV-22 Ospreys also either self-deploy to the location or get airlifted by heavy transport. On top of this, many other people associated with the White House and Secret Service fly commercial or on other government aircraft. A spare command and control aircraft, usually a C-20C, also is deployed to an airfield nearby. With all these moving parts, each leg of each mission costs many hundreds of thousands of dollars, or even millions, just in air transport costs alone.

When flying overseas, this aerial ballet turns into a flash mob, with an entire Air Force traveling alongside Air Force One. These aircraft include multiple C-5s, C-17s, MV-22s, VH-3Ds, VH-60Ns, C-20s, C-32s, C-37s and E-4Bs. Even E-6B Mercuries support these missions. Many of these aircraft are kept out of the public’s line of sight. International trips can cost many millions of dollars per-leg. So Air Force One, even with its brutally high operating costs, is just one piece in the larger—and much more costly—Presidential airlift puzzle.

Especially given the tense situation simmering over North Korea's provocative missile launches and hydrogen bomb test, it was not surprising to see an E-4B Nightwatch command and control aircraft shadow Trump to Asia. The jet landed at Kadena Air Base on the Japanese island of Okinawa to support the President's mission. The E-4B never lands at the same airport as the President and is usually located at within a few hundred miles of the primary visit location.

It is likely that more aircraft are on standby at various locations throughout the region in case of a crisis during the trip, as part of long-running so-called "continuity of government" protocols, as well as to support routine contingency plans. Other aircraft also tag along with the President's aerial armada while in the region, such as C-40s and C-32s, used to carry extra White House staff, security, press, and key players from around the region.

Noting that the propaganda value of doing so could be huge, officials and independent experts have suggested the North Koreans might conduct one or more provocative weapons tests during Trump's trip to the region. There would also be a significant risk of touching off an actual conflict. So far, thankfully, Kim has not decided to flex his military muscles.

The American president missed his own opportunity to make a personal show of force when he had to turn back from a planned visit to the Demilitarized Zone (DMZ) separating the two countries due to bad weather on Nov. 7, 2017. In April 2017, Vice President Mike Pence went to the DMZ famously looked sternly across the border.

Hopefully, the rest of the trip, which wraps up on Nov. 14, 2017, will be as uneventful and we won't have to see the full capabilities of the motorcade or the rest of the security apparatus supporting the Asia tour in action. 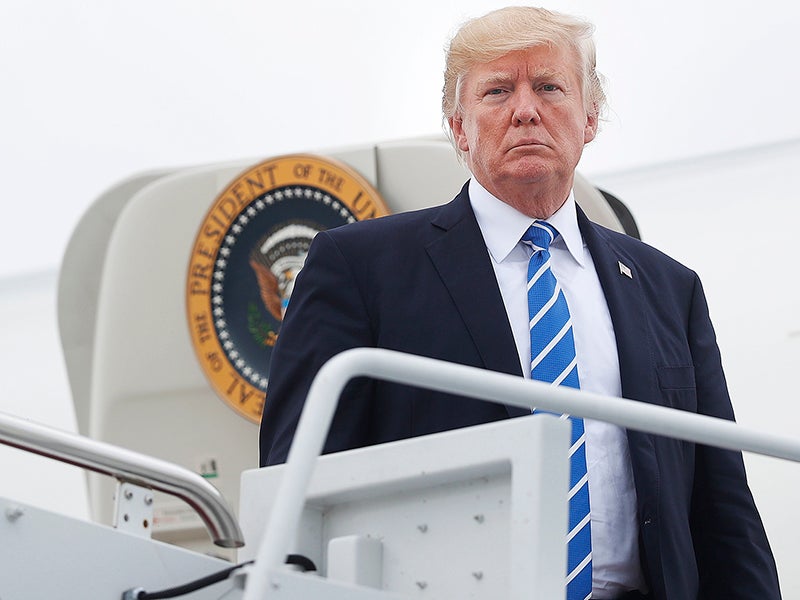 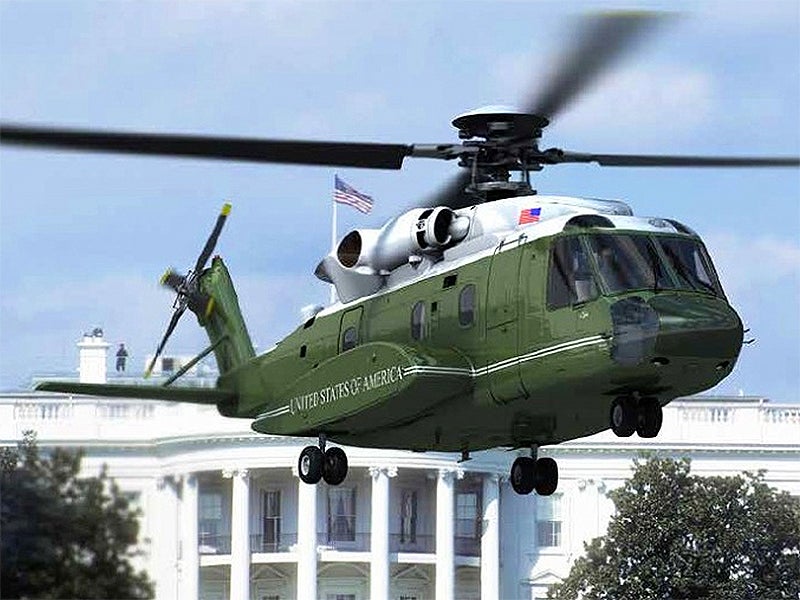