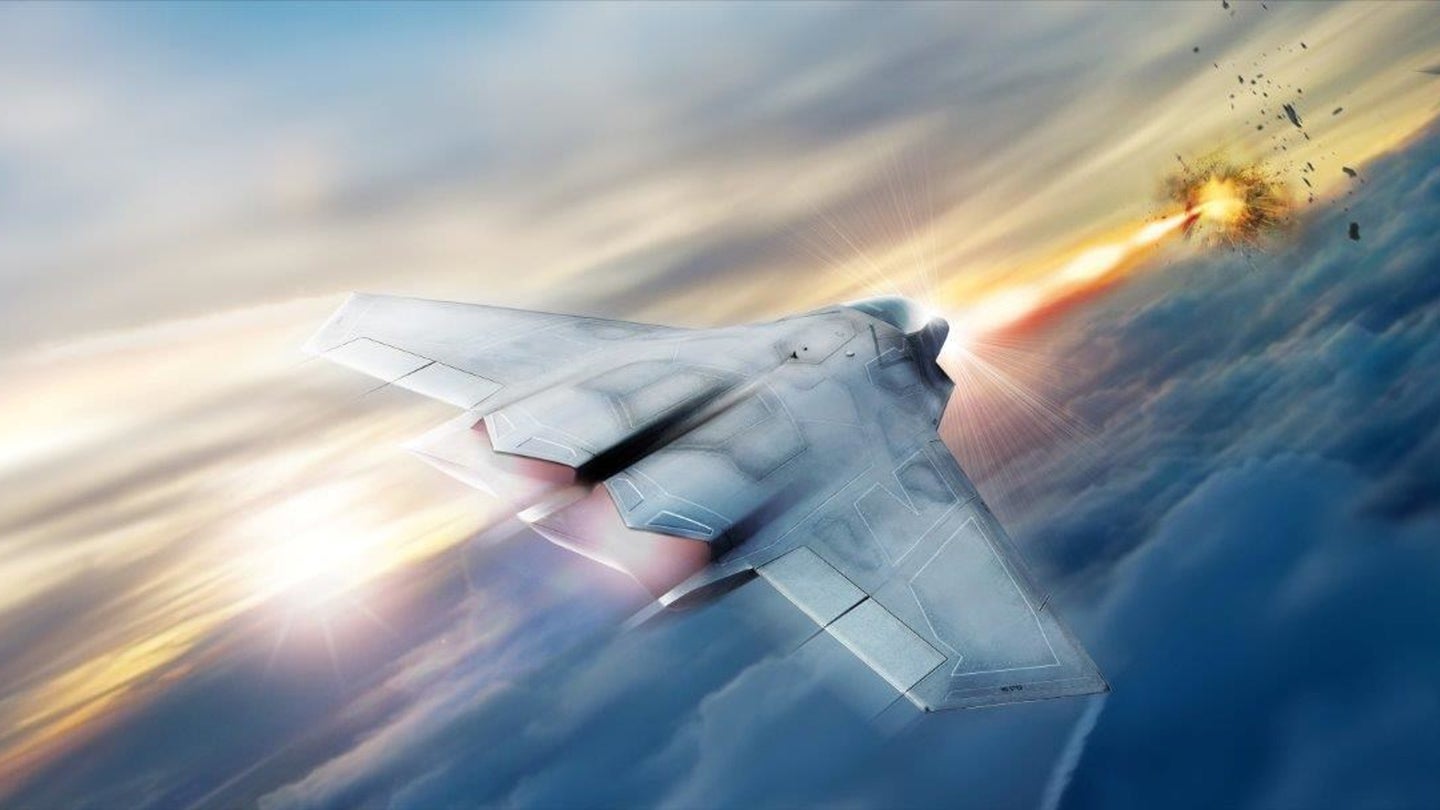 The U.S. Air Force has awarded Lockheed Martin a contract for work on a compact, high-energy laser as part a larger program to develop a directed energy defense system for fighter jets, with tests set to begin in 2021. The Maryland-based defense contractor is already working on a separate airborne laser weapon program for the Missile Defense Agency.

On Nov. 6, 2017, Lockheed Martin announced it had received the contract award, valued at more than $26 million, from the Air Force Research Laboratory (AFRL). The deal appears to cover only the Laser Advancements for Next-generation Compact Environments (LANCE) component of the larger Self-protect High Energy Laser Demonstrator (SHiELD) program. The project also includes development of a turreted beam control system to aim the energy weapon, SHiELD Turret Research in Aero Effects (STRAFE), and of a self-contained pod that will attach both items to the aircraft, called Laser Pod Research & Development (LPRD).

Beginning in 2021, AFRL plans to put the final SHiELD system through three phases of tests, according to a December 2016 briefing we obtained via The Freedom of Information Act. All of these will include both ground and flight test components.

The first phase has three objectives, two of which Air Force censors redacted from the briefing citing their right to withhold sensitive technical information. We do know the final goal is for the system to be able to spot, track, and lock on to “relevant, dynamic targets.” At this point in the program, AFRL does not expect the LANCE laser weapon to be available and will use a surrogate system, which might be a lower power laser that will serve as a pre-targeting pointer. At that stage, the available systems will still go into a fully flight qualified pod with beam and system controls, power source, and cooling equipment.

The Air Force again redacted two of the four objectives for the second phase, but it will include a full-up pod with the LANCE system and tests to make sure this works properly with the beam targeting equipment and has adequate power from the on board batteries. Perhaps most importantly, the trials will determine whether or not the laser might dangerously overheat and need additional “thermal management.”

The description of the third phase in the briefing was entirely blacked out, but would likely involve more strenuous testing in an operationally representative environment. In the briefing, AFRL said it hoped to have matured the SHiELD technology to the point where it could support further work on “short- and mid-term capabilities to meet present and emerging [Air Force] needs.”

Solid state lasers – which do not rely on liquids or gasses to help produce the beam – have already been shrinking in size and increasing in power for years. In June 2017, Raytheon announced it had successfully demonstrated just such a weapon inside a pod on a U.S. Army AH-64 Apache gunship helicopter.

The potentially revolutionary nature of a compact solid-state laser defense system on a fighter jet is clear. At present, fighter pilots rely on a combination of electronic warfare systems, a limited number of expendable countermeasures, and low-observable characteristics, the latter of which is not a feature on all designs.

The laser would be an ideal replacement for the countermeasures, since it effectively has a bottomless magazine. On larger aircraft, it could supplant directional infrared countermeasures (DIRCM), which can only confuse infrared-guided missiles, as well. It is also a much more focused system, with the beam zeroing in straight on the incoming missile instead of simply throwing out electronic “noise” or physical distractions in its general direction, though DIRCM turrets have a similar targeting capability.

Depending on the final beam control design, it is possible that the pilot may be able to cue the weapon with a helmet-mounted sight or even switch it into an automated mode where it spots, tracks, and destroys threats all by itself. Either way, it could help reduce pilot workload in what would have to be an especially tense situation.

The Air Force has not said what fighter jets it is interested in integrating with any such system, but a self-contained, podded unit would allow the service to install quickly it on various aircraft. Self-contained and compact, the system would be an perfect addition for future unmanned combat air vehicles.

It’s not hard to imagine the Air Force porting the final design over onto other aircraft, such as bombers, aerial tankers, and cargo planes, either. It might help mitigate the increasing vulnerability of these platforms relative to the growing number of stealth aircraft they’re supporting during actual operations. Potential near-peer adversaries such as Russia and China are fielding ever improving long-range air-to-air and surface-to-air missiles, along with their associated search and targeting radars, that could threaten these large, decidedly non-stealthy planes even if they're flying far away from the primary battlespace. A turreted laser would be far easier to adapt to these existing designs than some sort of add-on low-observable features or other notional "cloaking devices."

The defensive system could serve as a stepping stone for offensive air-to-air and air-to-ground directed energy weapons, too, something the Air Force has already expressed an interest in for the future. For close air support tasks in particular, the ability to have an aircraft on station for an extended period of time with a "bottomless" magazine and the ability to focus fire on a very small, precise target area could be invaluable, especially for troops dangerous close to the enemy or nearby innocent civilians.

The fact that Lockheed Martin won this contract is not necessarily surprising either, given the company’s extensive work on such systems in the past. In its press release, the firm was quick to point out that it had already delivered a 60 kilowatt-class laser to the U.S. Army to mount on an unspecified ground vehicle earlier in 2017. That service has already conducted numerous tests with a five kilowatt-class directed energy weapon fitted to a modified 8x8 wheeled Styrker armored vehicle, known as the Mobile High Energy Laser (MEHEL).

More recently, in October 2017, the defense contractor also picked up a $9.4 million contract from the Missile Defense Agency to work on a Low Power Laser Demonstrator (LPLD) that would consist of an advanced solid-state laser on a high-altitude drone. The goal of that separate program, which The War Zone’s own Tyler Rogoway has been following closely, is to explore the potential of an unmanned aircraft to carry a weapon powerful enough to shoot down hostile ballistic missiles during their initial boost phase for flight.

“We have demonstrated our ability to use directed energy to counter threats from the ground, and look forward to future tests from the air as part of the SHiELD system,” Dr. Afzal added in his statement. “It's a completely new and different challenge to get a laser system into a smaller, airborne test platform.”

That latter point is important, but one that doesn’t touch on the particularly complex issues of developing a directed energy defense system for aircraft faces significant hurdles. Though a promising concept, an individual laser can only engage one target at a time and a single turret will likely be unable to cover a full 360 degrees around an aircraft. The range and power of the beam is high susceptible to atmospheric conditions, such as clouds and smoke, too.

It might be possible to mitigate some of these issues by coupling the final SHiELD system with with advanced electronic warfare jammers. It could also supplement hard-kill miniature interceptor concepts, like the one Northrop Grumman has patented for stealthy aircraft. In 2015, Northrop Grumman had put out concept art of a notional sixth generation fighter jet with a self-defense laser weapon, as well. Depending on how the defensive systems detect and track incoming threats, they may be able to share a common targeting system, as well.

Lockheed has already been working on solutions to at least some of those problems, though. In 2014, the firm tested a so-called Aero-Adaptive, Aero-Optic Beam Control system, or ABC for short, as part of a program run by AFRL and the Defense Advanced Research Projects Agency (DARPA). The ABC turret could compensate for some atmospheric fluctuations, including turbulence, increasing and decreasing the laser’s power as necessary.

For test purposes, a Dassault Falcon 10 business jet carried the turreted laser, but Lockheed could likely adapt the system to fit SHiELD's requirements or in fixed spaces on other aircraft. The Air Force's F-35A Joint Strike Fighter, for example, has significant on board power capacity and significant available room in the fuselage already.

The basic design makes room for the large vertical lift fan on the Marine Corps' B model, but this isn't present on the A variant. Since this space goes through the fuselage, engineers could conceivably create a unitary mount with defense system turrets on the top and bottom, providing a better area of coverage above and below the aircraft. There might be other trade space available by moving one of the internal fuel tanks found on both the A and the U.S. Navy's C version, as well.

At the moment, Lockheed has only announced its deal to work on the directed energy weapon itself. It might give the company an advantage in securing the contract to work on the beam control and turret components, as well, though.

We'll be sure to keep an eye on this technology demonstration project as it develops and as it becomes clear what other companies might be involved in building the other parts of the complete SHiELD system.