A fighter needs an AESA radar to get the most out of the AIM-120D, something Canada's Hornets don't have. 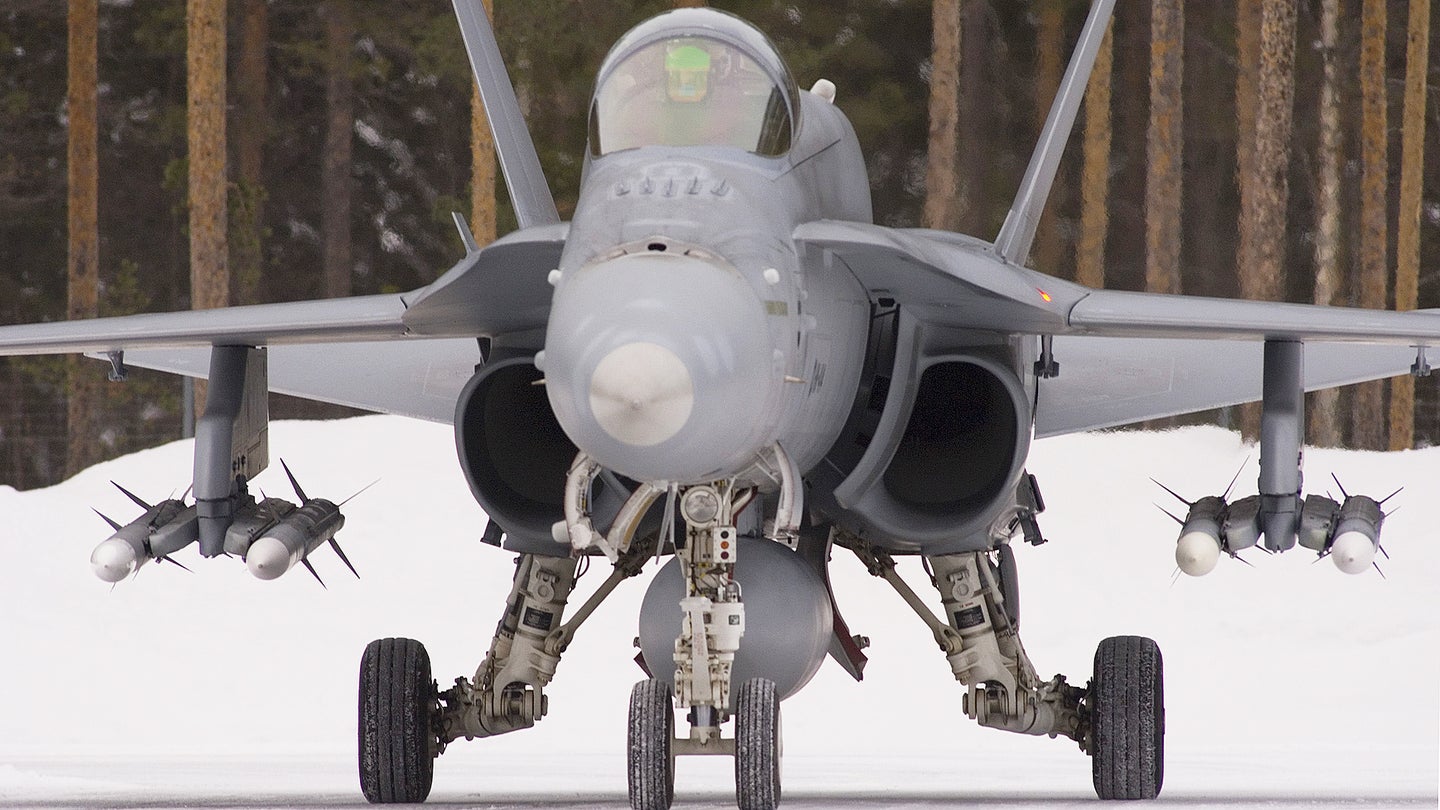 Canada's wish to buy the latest version of the Advanced Medium Range Air-To-Air Missile (AMRAAM), the AIM-120D, has been granted by the US State Department. The only problem is that their current fleet of aging CF-18 Hornets would realize little from the missile's most preeminent feature, its greatly enhanced range.

The cost of Canada's AIM-120D buy is no chump change. Set at $140M, it buys just 32 AIM-120Ds plus support equipment, captive training rounds, spares, training and so on. The DoD's press release reads:

"The Government of Canada has requested a Letter of Offer and Acceptance for the procurement of up to thirty-two (32) AIM-120D Advanced Medium-Range Air-to Air Missiles (AMRAAMs), up to eighteen (18) AMRAAM Captive Air Training Missiles (CATMs); up to four (4) AMRAAM Non-Development Item – Airborne Instrumentation Unit (NDI-AIU); up to two (2) AMRAAM Instrumented Test Vehicles (ITV); up to seven (7) spare AMRAAM guidance units; up to four (4) spare AMRAAM control sections for use on their F/A-18 aircraft.  Included in the sale are containers; storage and preservation; transportation; aircrew and maintenance training; training aids and equipment, spares and repair parts; warranties; weapon system support and test equipment; publications and technical documentation; software development, integration, and support; system integration and testing; U.S. Government and contractor engineering, technical, and logistics support; and other related elements of logistics and program support.  The estimated total cost is $140 million."

The missile purchase seems to have been intended to coincide with the country's planned interim purchase of 18 F/A-18 Super Hornets, an initiative that unfortunately has since abandoned due to a major trade dispute between Boeing and Canada's Bombardier. But considering Canada had officially backed away from the Super Hornet deal nearly two months ago, the fact that the export process continued for the AIM-120D is a bit puzzling.

Canada could still execute the AIM-120D purchase in an attempt to update their air-to-air missile inventory and add capability to their old Hornets. The RCAF has been flying with the AIM-120C since 2003, when it made an initial order for 97 of the beyond visual range air-to-air missiles. Since dropping their Super Hornet ambitions, Canada has searched for surplus Hornets to supplement their current fleet. They finally decided that Australia was the best, if not the only, source of suitable and readily available legacy F/A-18s. We detailed this move by the Canadian Ministry of Defense in a recent article.

Regardless, both the RCAF's CF-18A/Bs and the RAAF's F/A-18A/Bs feature the AN/APG-73 multi-mode pulse doppler radar which was received through upgrades over the years, replacing the less capable AN/APG-65. While AN/APG-73 radar set remains capable in terms of mechanically scanned array systems, it does not feature the air-to-air range that can take substantial advantage of the AIM-120D increased reach.

Estimates on the AN/APG-73's range vary, and true performance is dependent on many factors, most notably the target's radar cross section and aspect in relation to the emitter. But generally, when it comes to fighter-sized targets the AN/APG-73 is thought to have a range of around 35 miles.

The AIM-120D features substantially more range than the AIM-120C7 (I believe the RCAF still uses the C5) without breaking the classic AMRAAM mold line and dimensions. Claims vary as to how far the AIM-120D can reach as official performance numbers are classified, and a missile's range all depends on the specifics of an engagement and especially the energy and altitude state of the launching aircraft, but some put it upwards of 100 miles, while others say it is more like 75 miles.

The missile does feature other enhancements, like an improved two-way data-link system that can support third party targeting. Its navigation system now has embedded GPS, and the missile has better performance in electronic warfare environments, along with a home-on-jam capability which puts aircraft attempting to jam the missile and/or the launch aircraft at greater risk. Other refinements to its electronics make it more durable and adaptable for flying inside the weapons bays of 5th generation fighter aircraft (F-35 and F-22).

You can read more about the AIM-120D and the tactics surrounding its employment in this past War Zone feature. But suffice it to say, the AIM-120D's advantages relate more to high-end peer state conflicts than the coalition type operations Canada has been a part of since the Hornet's entry into service in the early 1980s—ones where long beyond visual range shots are usually negated by the need to visually identify the target before firing.

It is uncertain if not unlikely that Canada will upgrade their CF-18s with new radars, even if more are bought from Australia, as a replacement fighter project is on the horizon and will likely be executed sometime in the 2020s. AESA radars are expensive items and Investing millions in each 30 year old airframe for new radars alone is an expensive proposition, but upgrade options do exist.

Both the Raytheon Advanced Combat Radar (RACR) and Northrop Grumman's Scalable Agile Beam Radar (RACR) can be adapted to fit the confines of the Hornet's nose section. SABR has been chosen to equip the F-16V and some Air National Guard F-16s, so there could be sustainment and training synergies between the US and Canada if they were to choose to do away with the AN/APG-73 and replace it with the RACR. But once again, this would require a large investment in aircraft that are supposedly in the twilight of their career with the RCAF. As of now, the CF-18A/B is supposed to stay on till roughly 2025 in CRAF service.

If the decision is made to keep the CF-18 flying till 2032 as some have said is a possibility, than more substantial investments in improving their capabilities would be more logical. Such a plan would likely come at the cost of tens of millions per aircraft when you also factor in the structural upgrades needed to prolong the Hornet's life another 15 years.

A case could be made that that the AIM-120D would help engage bombers, which have large radar signatures, at longer ranges. Considering Russia's much more aggressive foreign policy and its restart of long-range bomber flights, along with the fact that Canada has a lot of airspace to patrol along the country's northern frontier, this seems like a valid argument. But the AIM-120D would still likely exceed the AN/APG-73 radar's capabilities even against large targets, and buying a couple dozen more miles in engagement range against lumbering bombers really isn't as big of an advantage as it sounds, especially considering Canada flies combat air patrols with limited AIM-120s onboard (usually two with two AIM-9s, but even AIM-7s are still seen loaded out on CF-18s instead of AIM-120s). During a time of conflict this could change of course.

There is no doubt that the AIM-120D sports some impressive features, but is it really worth introducing a new missile at the cost of $140M, especially considering the missile's key feature—it's enhanced range—largely outpaces the targeting abilities of the Hornet's own primary sensor, its radar?

That's a question the RCAF will now have to answer.